Accessibility links
'Me Too' Legislation Aims To Combat Sexual Harassment In Congress The bipartisan, bicameral proposal would expedite the complaint process and provide for more transparency on taxpayer-funded settlements. 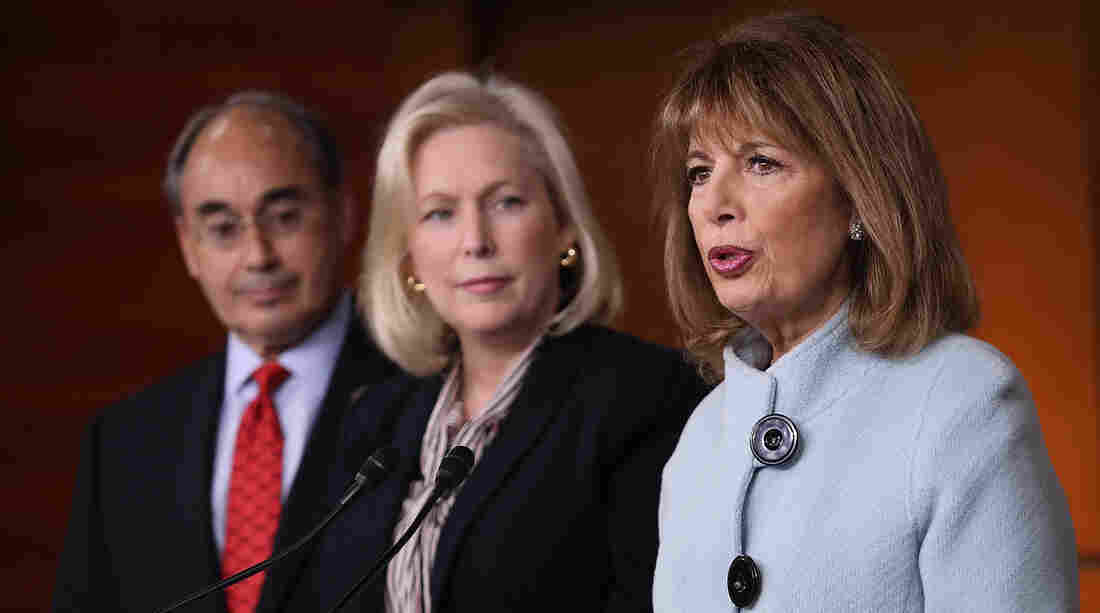 A group of House and Senate lawmakers introduced legislation Wednesday to overhaul the system for filing and settling harassment claims from congressional employees.

"Zero tolerance is meaningless unless it is backed up with enforcement and accountability," said Rep. Jackie Speier, D-Calif., a leading co-sponsor of the ME TOO Congress Act, named after the #MeToo social media awareness campaign for victims of sexual harassment and assault.

The legislation is in addition to recent moves by the House and Senate to mandate previously optional sexual harassment training for all lawmakers and Capitol Hill employees. The Senate already approved the rules change, and House Speaker Paul Ryan said this week the House will do the same soon.

Speier has become a prominent voice regarding the work climate on Capitol Hill after she divulged in a YouTube video that she had been sexually assaulted by a chief of staff decades ago when she was a young congressional aide. At a congressional hearing on Tuesday, she also testified that she was aware of two sitting members of Congress who had engaged in sexual harassment, but she has declined to identify them because "the victims are the ones who do not want this exposed."

Sen. Kirsten Gillibrand, D-N.Y., is leading the effort in the Senate. She has previously disclosed that she has been harassed by unnamed male colleagues. She has also worked on combating sexual abuse in the U.S. military. "There is a serious sexual harassment problem in Congress and too many congressional offices are not taking this problem seriously at all," Gillibrand said.

Their proposal would overhaul the process for filing harassment claims as laid out under the 1995 Congressional Accountability Act and processed under the Office of Compliance. The bill would:

Speier said Wednesday that over $15 million has been paid to settle some 260 claims since 1997. They cover all harassment settlements, for things like race and age, not just for sexual offenses.

Rep. Ryan Costello, R-Pa., another cosponsor, said he believed lawmakers would support more transparency for settled claims. "We are employers," he said, "so how we would process that, how we would handle an employee if they were mistreated, or they did raise a concern, speaks to the character and integrity of how we operate our offices."

Speier said it was unlikely Congress would act on this legislation this year because the legislative calendar is already crowded through December. However, she noted party leaders have so far been receptive to efforts to make improvements to Capitol Hill culture in response to the recent wave of of high-profile sexual harassment and assault allegations in the news.

A previous photo caption incorrectly identified Rep. Bruce Poliquin as a Democrat. He is a Republican.