Accessibility links
Why Some Survivors Of Sexual Harassment And Assault Wait To Tell Their Stories Alabama Senate candidate Roy Moore has questioned why it took decades for women to come forward and accuse him of sexual misconduct, and it's not the first time women have gotten that reaction.

Listen · 7:57 7:57
Why Some Survivors Of Sexual Harassment And Assault Wait To Tell Their Stories 7:57 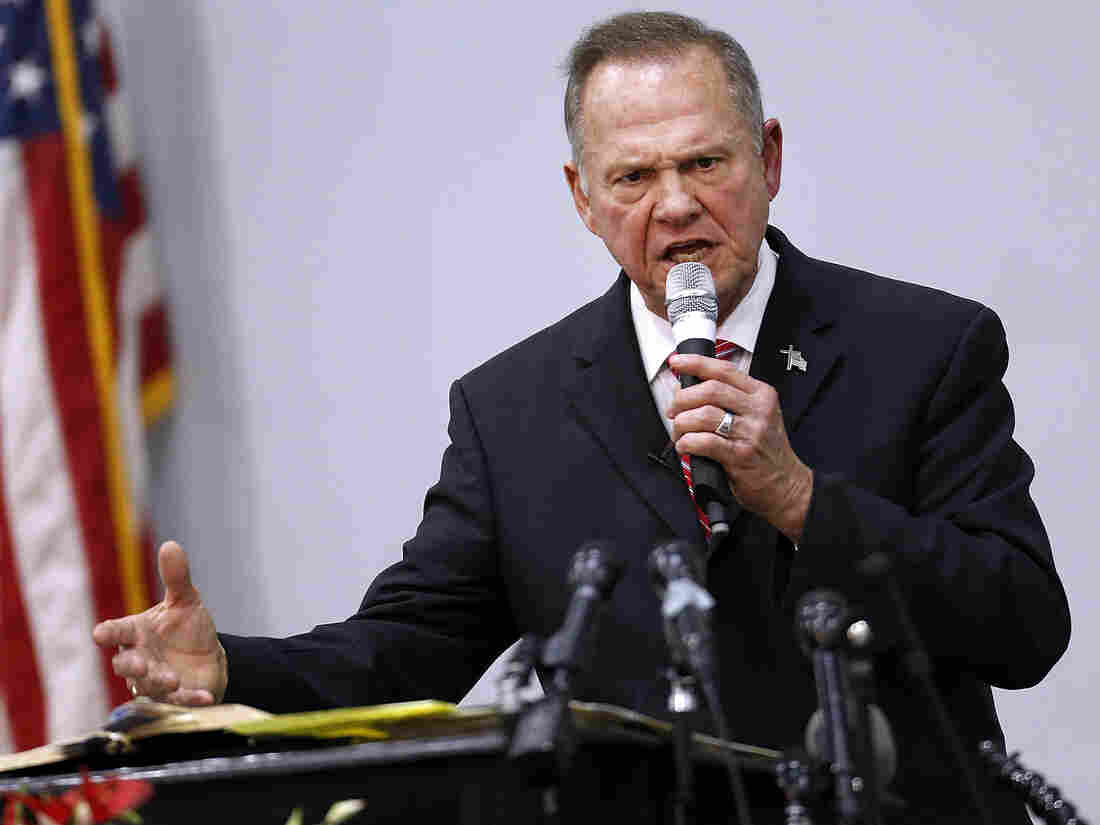 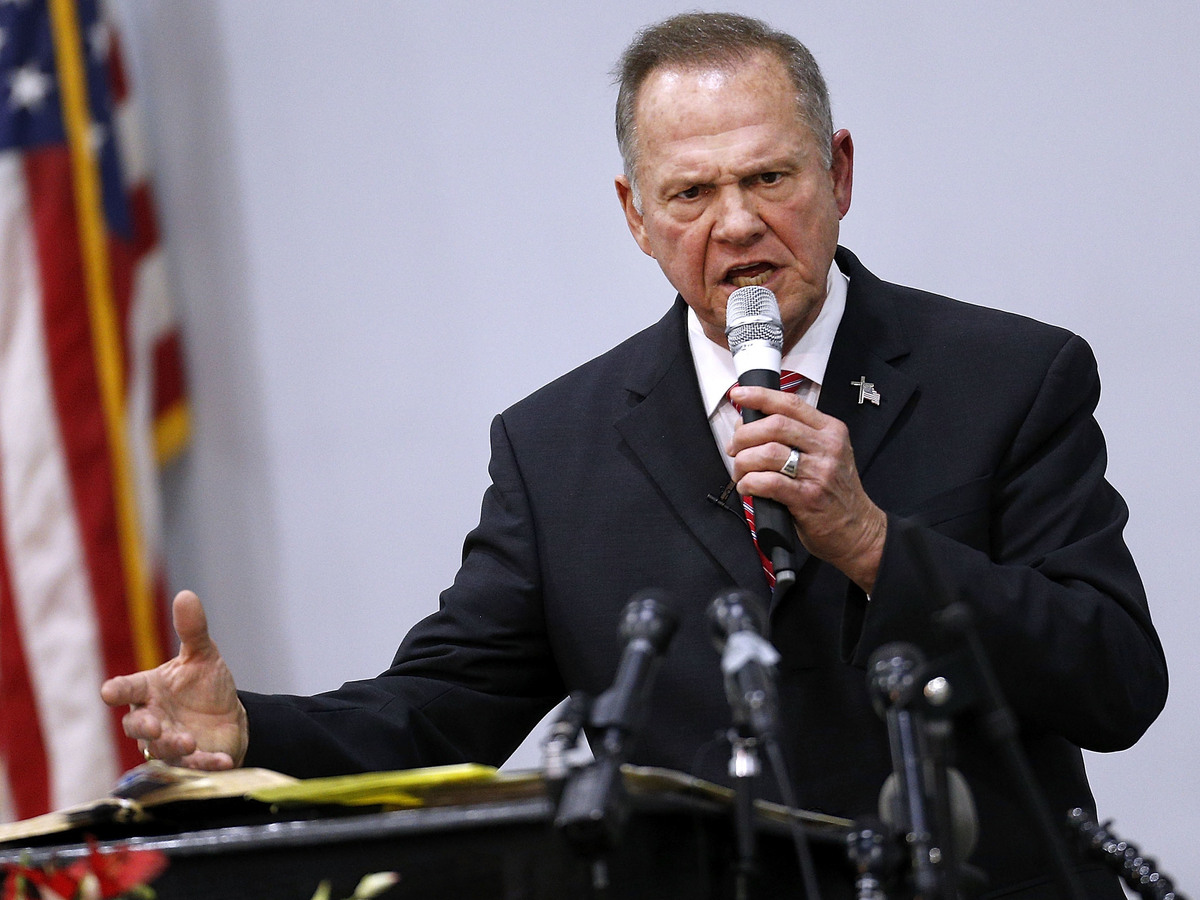 Last October, several women accused then-presidential candidate Donald Trump of sexual assault. During a campaign stop in Greensboro, N.C., Trump addressed the issue by asking why — if the stories were true — the women waited so long to come forward.

"Now suddenly after many, many years, phony accusers come out less than a month before one of the most important elections in the history of our country," Trump said.

A year later, Alabama Republican Senate candidate Roy Moore is using similar language. In the last week, five women have accused him of sexual misconduct. They say the incidents happened when they were teenagers and Moore was in his 30s.

"Isn't it strange," Moore responded, "that after 40 years of constant investigation, people have waited till four weeks prior to the general election to bring their complaints? That's not a coincidence."

Skepticism about women's stories has been a common refrain when accusations are made about incidents going back many years, says Megan Garber of The Atlantic, who has reported extensively about the recent revelations of sexual abuse and harassment — and on why women stay silent for years and even decades.

The highlights below have been edited lightly for clarity.

On what women have said about staying silent

Oh, it's such a complicated question. But I think one of the ironies that has really stood out to me in reporting on this and thinking about this is just women for so long have been dismissed as emotional and irrational and flighty and all of this.

And I think in these instances, to stay silent and to not speak has been the most rational decision they could make in the moment. Just the economics of it are so brute and punishing, you know? Just as a matter of pure sort of cost-benefit analysis, it often just does not make sense for them to come forward because they will be often punished. They will be shamed. They will be told, "You know, maybe — you know, maybe you misunderstood the situation," or "Maybe you shouldn't have worn that skirt to work." Or you know, "He's just like that, you know? Don't make a big deal about it."

Then there's also the fact that the women who have come forward often don't see any results. People sort of close ranks, so I think there are so many reasons they don't come forward. And I think it also makes it really extra commendable of the women who are stepping forward now to say something.

On the history of these stereotypes of women

You can actually go back to Aristotle, for example, who famously believed that women were sort of inferior versions of men, sort of misformed men. He believed that their biological makeup made women, again, more emotional and less able to regulate their emotions. He thought as a result of that, women were also more adept at lying, more apt to misinform and to manipulate. You can see those threads carrying through over centuries into today. The word hysteria comes from women's biology. And again and again, women are sort of dismissed as, "Oh, you're just being emotional; just calm down, sweetie."

On how this history lends itself to victim shaming

I think they're so connected. I think basically if a woman will come forward and say, "This happened to me," often the response will be, "Are you sure? Did you misunderstand the situation?" You know, gaslighting is a term that I think very productively has entered the culture in recent years. And it very much applies here where a woman is made to sort of question her own reality and question her own memories.

On how systems perpetuate sexual harassment

It's almost impossible to talk about any of this without talking about systems and without talking about networks and without sort of having a real respect for how one action really does have radiating effects. And it will affect not just the victim in the moment but so many other people — that person's family, that person's co-workers. It can affect institutions. It can affect businesses, and it can affect the culture at large. ... One of the terms that came up again and again talking about corporations was just the idea of the corporation or the institution or the company or what have you as a family. You know, and a family protects itself. And a family, you know, sort of owes itself, you know, to stay together essentially. But of course that sort of writes out, you know, the individual members of the family sometime who might have a different interest than the interest at large.

On if things are changing with more allegations

Definitely things have changed. One of the questions I really struggle with is just, should we be optimistic at this point? And do we have a reason for sort of hope that things will get better? Certainly things have actually changed, but I also just wonder whether we should be cautious about expecting that so much will change because things like this have happened actually in the past.

So in the '70s when the term sexual harassment was first coined, there was a lot of optimism that, OK, well, now we have a language for this. Now, people are talking openly about this, and so, that's going to change things — and a little bit but, as we're seeing now, not completely. And then, you know, 1992, after the Anita Hill testimony, was coined the year of the woman. And there was a lot of optimism after women were coming into Congress and all of that.

And things did change. Things got a little bit better. And yet still, here we are. So I think this is a galvanizing moment. And I think it's wonderful that we again have language to talk about these things and all of that. But I also — I'm not a hundred percent optimistic just because of the way this has sort of worked as a cyclical thing.