Accessibility links
The Troublesome Universe Of 'Valiant Dust' Richard Baker is an established voice in military science fiction; his latest, Valiant Dust, kicks off a new space adventure series. But it's hampered by shallow characters and cultural blindness. 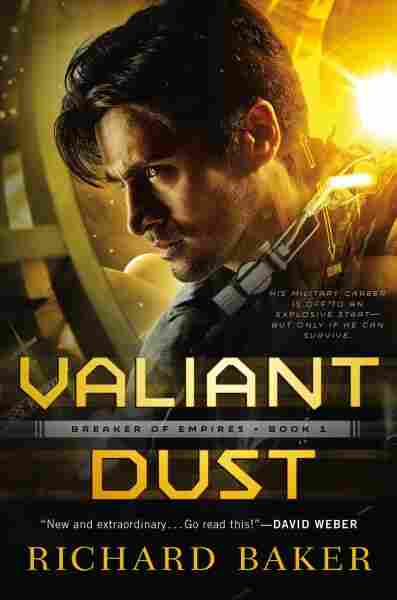 They say that all science fiction stories are tales of today, dolled up with ray guns and spaceships to make them more palatable. That they're all muddled messes of our modern politics and current fears, our hopes for distant sweet endings cut with the arsenic cynicism of actually living in the present moment.

And that's probably true, if only because no science fiction writer (with the arguable exceptions of William Gibson and Philip K. Dick) can really see into the future. Richard Baker's newest novel, Valiant Dust, is no exception. As a matter of fact, it is possibly one of the most thoroughly today-ish novels I have ever read — all starships, warp torpedoes and faraway worlds serving as only the gauziest scrim to cover a story which is very much about our current moment in history.

Or ... not. I mean, I'm giving Baker some credit here. The man has written a bunch of books. He's a solid voice in the military sci-fi genre and served as a United States naval officer himself, giving an earned weight to his voice when it comes to describing the minutiae of naval matters. Valiant Dust is the foundation of a new series (called Breaker of Empires) which, presumably, will follow the characters introduced here through the universe he has built.

But that universe? It's troublesome. Set centuries in the future (following the discovery of faster-than-light technology, a diaspora from earth as it falls to a barely mentioned global Caliphate, and the always convenient misplacing of several entire planets full of mono-ethnic peoples who then slip into a kind of futuristic techno-feudalism before being miraculously re-discovered hundreds of years later), Valiant Dust drops in at a point where the major "cosmopolitan" powers — the Euro-centric Aquilans, the Germanic Dremark Empire, and the Canadians, for some reason — have become a sort of First World commonwealth. In a peaceful state of détente, they are either nobly aiding the backwards human colonies recover from their isolation, or ruthlessly divvying up this galactic Third World as nouvelle colonial masters.

You're Going To Hate 'TheMystery.doc,' And That's OK

It all depends on how you read the novel, the baggage you bring with you, and how much forbearance you're willing to extend to a guy who opens his novel about a backwater Indian prince serving aboard an Aquilan warship with a quote from Rudyard Kipling — while appearing to have no understanding of the historical irony.

Sikander Singh North is our prince; he's from Kashmir, an Indian planetary system recently reconnected with Aquila but plagued by internal strife and rebellion. Sikander takes a post as a gunnery officer aboard the Aquilan battleship CSS Hector, which is almost immediately dispatched to Gadira — an Arabic planet which rejoined the great powers even more recently. Gadira is having troubles with terrorism, which quickly escalate into a full-scale revolt by fundamentalist desert tribes.

And while not everyone is happy to have Sikander North aboard the Hector, it certainly helps that he's good looking, fit, dangerous, competent, rich, educated, cultured and basically the kind of convenient man who just happens to know everything required of him in almost any situation. Problems with fundamentalists on your conveniently desert-y Arabic planet? Sikander, too, comes from a place of heavy religious influence and terrorist bombings. There's a riot on the streets? That's fine, because Sikander has experience with rioters (as part of his tragic backstory). No one can fly the shuttle? No worries, Sikander is a qualified pilot, too!

It all depends on how you read the novel ... and how much forbearance you're willing to extend to a guy who opens his novel about a backwater Indian prince serving aboard an Aquilan warship with a quote from Rudyard Kipling.

And look, there's some slack you could cut Baker if you're willing. Valiant Dust could be read as a re-examination of 19th and 20th century colonial politics through a science fictional lens. You could see his brief explanation of everyone in the future being kinda pan-ethnic anyway as a United Colors Of Benetton band-aid over the problem, or assume that, at some later point in the series, Sikander will emerge as the titular "Breaker of Empires" and that all this ethno-cultural mess Baker is creating will just work itself out.

And I might've been willing to suspend a little judgement if not for the fact that what could (also) be seen as heroic European powers coming to the arguable rescue of Indian and Arabic cultures — in an example of startling cultural blindness and lack of imagination — is actually one of the smaller problems with the book. For one thing, no character beyond the main protagonists get any development deeper than being the Angry Atheist or Faithful Servant or Disposable Redshirt, and the main bad guy is so mustache-twirly that I'm amazed he didn't end up tying someone to a convenient set of railroad tracks. And there's an entire secondary plotline that gets developed, dropped and then suddenly resolved in a ridiculously unsatisfying way.

Valiant Dust isn't terrible, it's just not very good. If you're in it just for the space battles, there's some fun to be found here. The final naval engagement is actually quite good. But no matter how you read it, Valiant Dust's universe is a messy one.

And it's just not a place I want to spend any more time.