Accessibility links
Fandom: A Passion For Soap Operas Kept One Prisoner Out Of Trouble Christopher Scott served over a decade in prison, and there he developed a passion for soap operas. Now free, he still keeps his appointment with General Hospital. 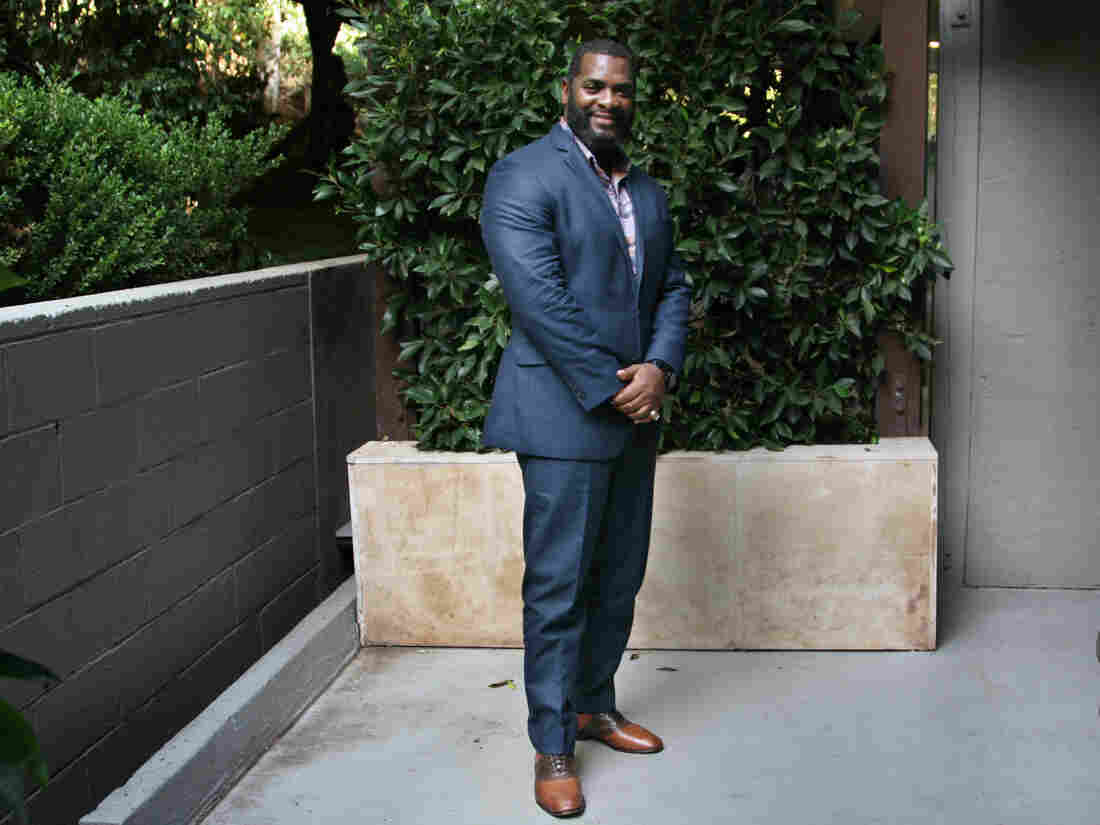 Christopher Scott served over a decade in prison, and while in the middle of the sentence, he developed a passion for soap operas. Justin Richmond/NPR hide caption 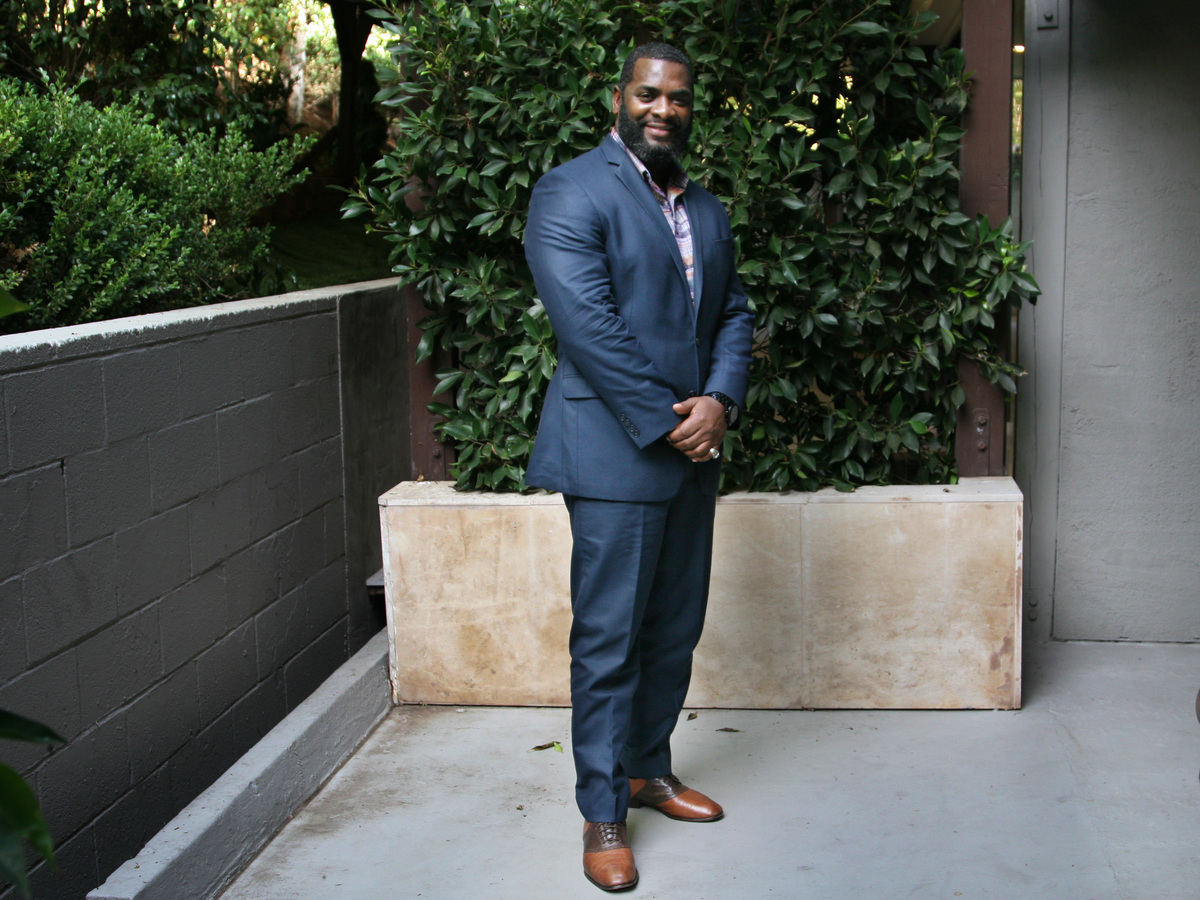 Christopher Scott served over a decade in prison, and while in the middle of the sentence, he developed a passion for soap operas.

Chris Scott spent 13 years in prison for a murder he didn't commit.

Before his time in jail, he led a quiet, domestic life with his two sons and his girlfriend.

Then his life became a nightmare. Scott constantly worried for his safety. He learned to cope in prison, but he knew he had to stay out of trouble, because if his innocence was proved, he wanted to be able to walk free.

As part of Morning Edition's exploration of fandoms, Scott, 47, describes, in his own words, how his passion for daytime dramas helped him walk the straight line.

Four things kept me out of trouble: working in the kitchen, going to the gym, reading three books per week and — the most important thing — was the soap opera.

I got a crew of men that, in the world of society, was killers. One of them named Baby Shaq, 'cause he was a big guy like Shaquille O'Neal. We had a guy named T-Bone, and we had Slim 50. These were some of the hardest-core fighting guys — but when that soap opera came on, you can hear a pin drop on cotton. It's like all eyes — don't nobody want to blink, because if you feel like if you blink, you gonna miss something.

We gave General Hospital a new name. We didn't call it General Hospital no more. We called it "The Dope" — because it was addictive. We walked down the hallway, they shouting, "Hey — did you see 'The Dope' yesterday?"...

Watching these love stories in a day room full of guys, you know they made the snide remarks of, "it's pretty much for women and females" or whatever the case may be. But we didn't care about that — because they knew the guy that was watching the soap opera probably can kick half of the cellblock he lived on's butt.

When Wrestling Is 'Physical Theater,' Fans See Art In The Ring

There was this one character on General Hospital named Sonny Corinthos, and he ran the whole town, and he had a bunch of businesses everywhere, but his main business was coffee importing.

So I was telling myself, "Well, you know, this kind of an inspiration to me, so I need to watch this guy and get some knowledge." And he used to hide whatever he was trying to ship in a barrel under the coffee beans, and it'd get shipped out of the country. So I looked at that, I said, "man, you know, that may be a good way to move things in prison."

And my job was working in the kitchen. So what I did, I created this hamburger business, but you gotta get everything past the guards to get it where you have to go.

So I used to take an ice bucket, and line cardboard at the bottom of the ice barrel. And I used to sit 60 hamburgers and 60 orders of fries on that cardboard. And then I'd put another cardboard on top of it, so when the officers raised the lid up, they couldn't see it because it was underneath the ice.

So once I got to the cellblock, I dumped the ice out and sell 'em — and dude, I was like the black Wendy's or the black Ronald McDonald in prison. And that was kind like that entrepreneurship that I learned from watching soap operas.

Babies And Baseball: A Dad Plants The Seeds For A Shared Love Of The Game

The soap operas really, it resonated a lot about missing home, missing the arguing you heard your mom and dad have every now and then. You miss the sisters fighting over the bathroom. You miss the brothers going outside shooting basketball in the backyard. So yeah, it resonated hard and heavy.

Like, just say, holiday seasons. You see the soap opera people, they got the big Christmas trees. They dress nice in red and white and all these pretty Christmas colors. And it made you want to be a part of that. ...

And seeing it on TV, I'mma tell you, I didn't want people to see me cry or shed a tear, but every now and then that happened. So I had to go in my cell. And I used to hang a sheet up, and the sheet would cover my whole cell, and I just used to go in my cell and have a big cry about it.

Wasn't bad tears, it was good tears, because I knew I still had a heart. Because being falsely imprisoned, sometimes it hardens that heart to where you don't want to show a sign of weakness.

I know watching soap operas helped me with my dilemma, and we all can learn a lesson about how we choose not to judge people about what they think or what they watch because we all need something to hold on to.

Scott was exonerated after 13 years in prison. When he got out, he kept up that entrepreneurial spirit: He created a detective agency, looking into other innocence cases. Scott's story will be featured in an upcoming PBS documentary called True Conviction.

And yes, he still watches every episode of General Hospital.

Dave Blanchard (@blanchardd) is a producer with Morning Edition. Digital News producer Heidi Glenn adapted this story for the Web.