Accessibility links
How The Bundy Trial Hits America's Widening Information Divide The Bundys are savvy users of social media, which helped them shift the story away from the orders and laws Cliven Bundy is alleged to have violated and toward one of a defiant cowboy taking a stand. 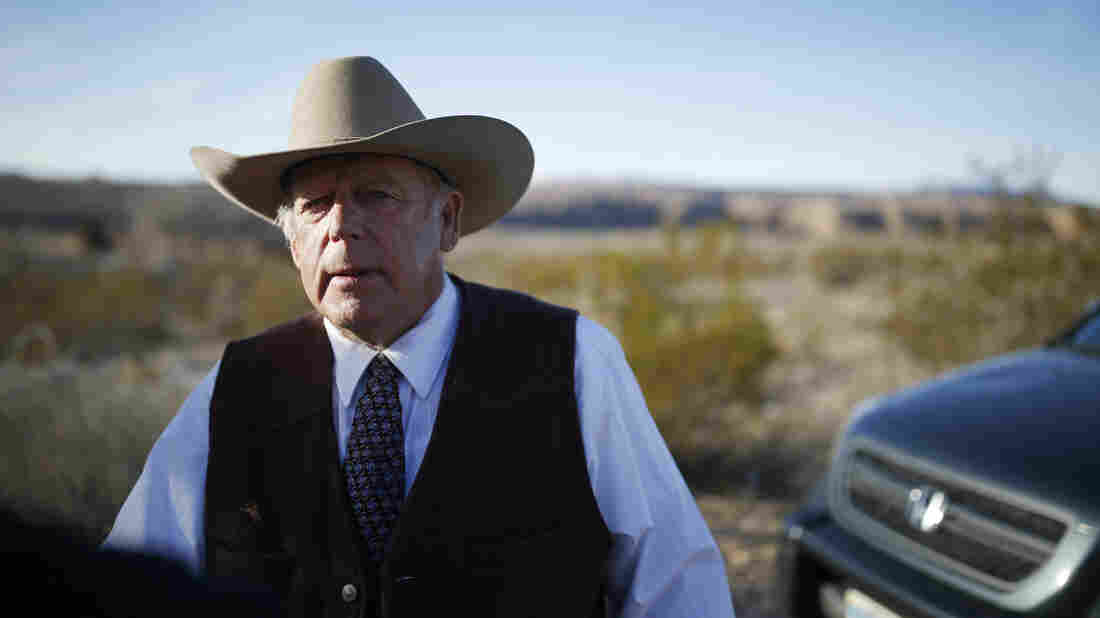 Cliven Bundy, his two sons and another militiaman are accused of assaulting federal officers when the government tried to remove Bundy's cows that were grazing on U.S. public land without permits. John Locher/AP hide caption 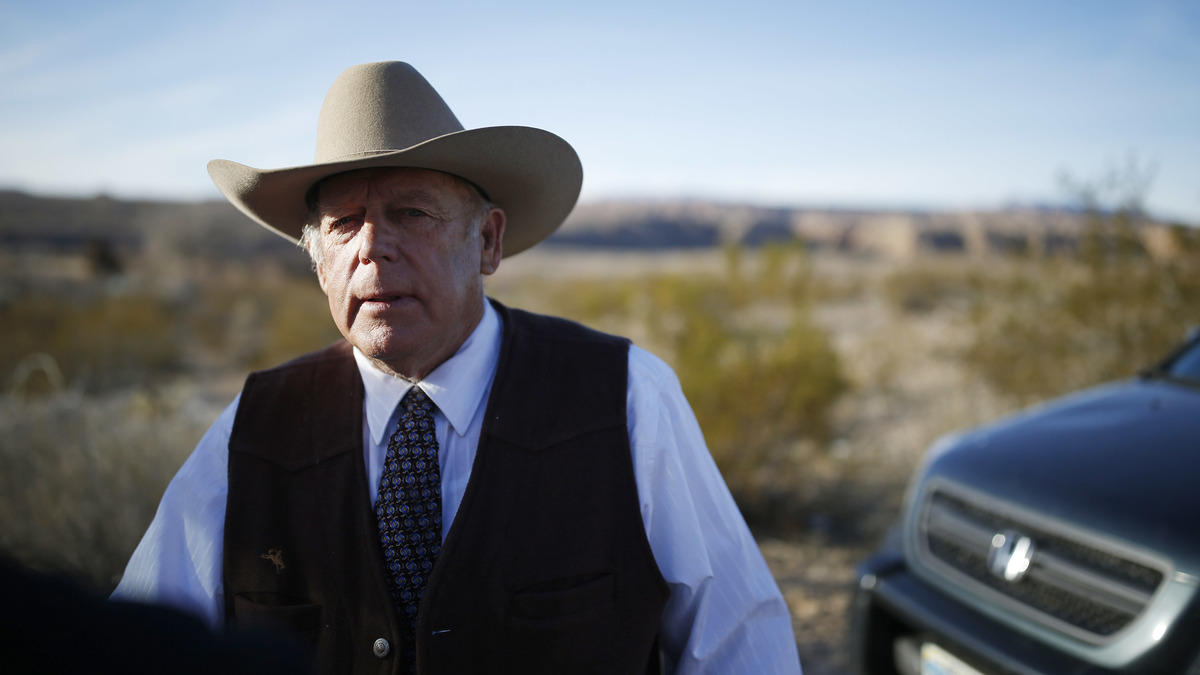 Cliven Bundy, his two sons and another militiaman are accused of assaulting federal officers when the government tried to remove Bundy's cows that were grazing on U.S. public land without permits.

The federal conspiracy trial against Nevada rancher Cliven Bundy is hitting right at the heart of the country's divide over information and truth.

Opening statements began this week in the case of Bundy's armed standoff with federal agents near his ranch in 2014. Bundy, his two sons and another militiaman are accused of assaulting federal officers when the government tried to remove Bundy's cows that were grazing on U.S. public land without permits.

This is one of the most important western public lands cases in modern history. It arrives at a political moment in which the integrity of many institutions is being called into question and when accusations of so-called "fake news" come from the highest levels, including the government itself.

U.S. Attorney Steven Myhre told the jury that the Bundys pushed a false information campaign before the standoff, using social media to recruit militia to come to the ranch after claiming they were under attack by federal agents.

"This case is not about protesting," Myhre said. "This case is about violence and instilling fear [in law enforcement officers]."

Defense attorneys are hoping to flip that argument around and convince the jury that it was the federal government conspiring against the ranchers.

"From our point of view, the escalation has always been from the government," said Bret Whipple, attorney for Cliven Bundy.

The Bundys were early and savvy users of social media in rural America. It has helped them shift the story away from the court orders — and laws — Cliven Bundy is alleged to have violated and toward one of a defiant cowboy taking a stand against a tyrannical federal government. 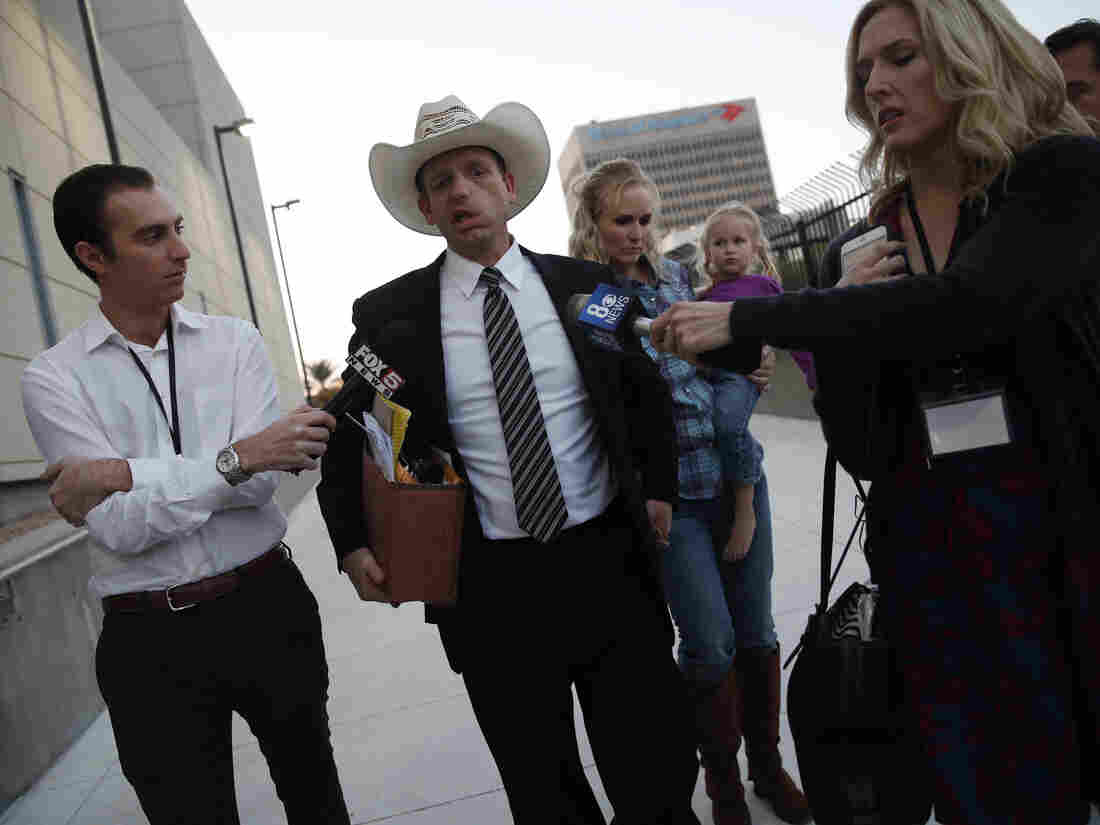 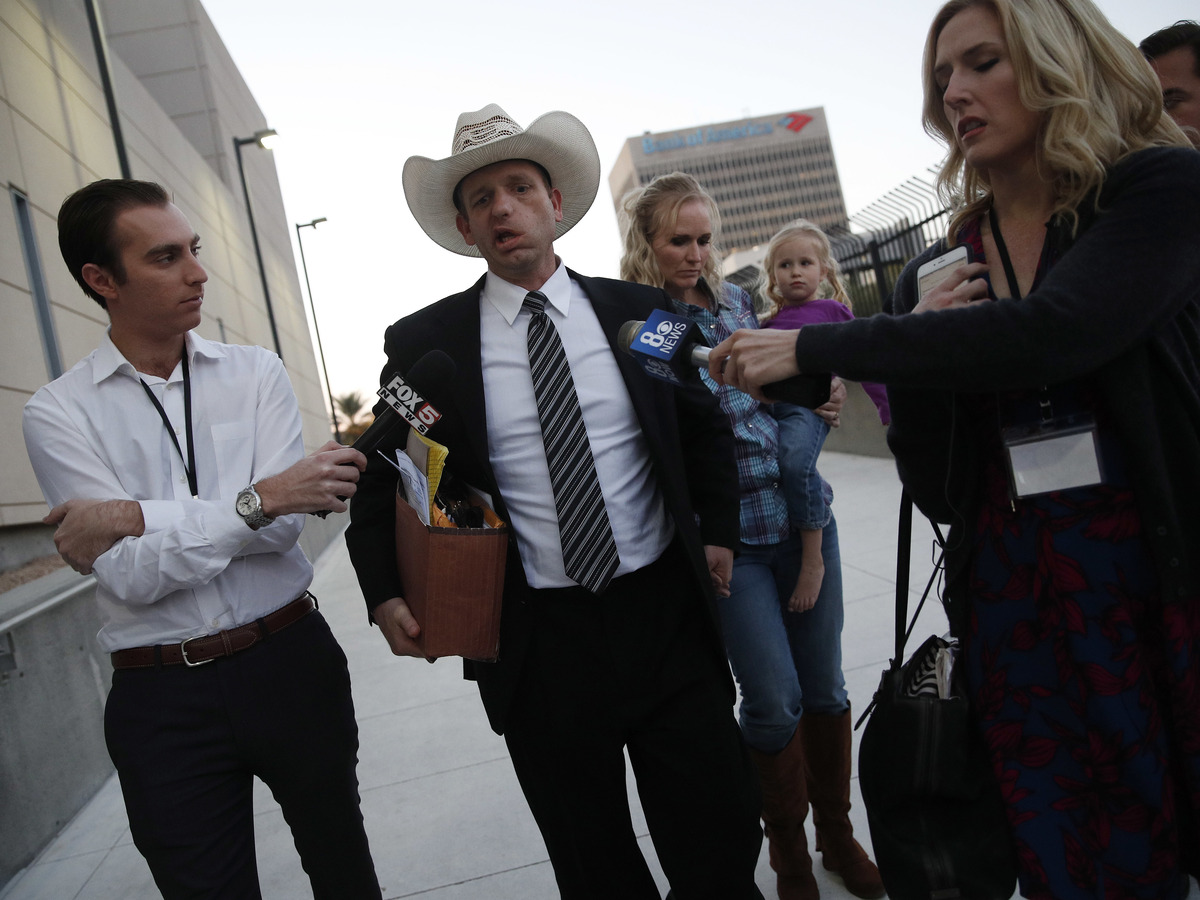 Ryan Bundy, one of Cliven Bundy's sons, walks out of federal court Tuesday in Las Vegas.

This happened before the high-profile trial and has now become part of it.

"We're going to pray for a softness of heart from the jurors," Carol Bundy, Cliven's wife, said recently in a video posted to YouTube. "The truth will set us free, and the wonderful thing about truth, the beauty about truth is it's so easy to tell."

The idea of "truth" is expected to come up a lot in the Bundy trial. In the government's eyes, the Bundys' "truth" is a misinformation campaign.

"The narrative among Bundy supporters is that the government is not presenting the truth and it's very difficult to know that truth and therefore why should men be convicted on things we can't know," said Tay Wiles, associate editor at High Country News, a western environmental magazine.

Wiles says this dynamic puts even more pressure on the prosecution in the case.

"I think they're on their back foot a little bit in terms of trying to put the Bundys on trial instead of having their own institutions be on trial," she said.

Wiles is a regular in the courtroom alongside reporters from mainstream outlets like The Los Angeles Times and The Wall Street Journal. But there are also some of the Bundy movement's early promoters: people from far-right Internet talk shows and conspiracy websites identifying themselves as media. Friends of the Bundys regularly livestream updates to their followers during breaks in the trial (no cameras or recorders are allowed in federal court).

The trial is expected to last into next year.

Two versions of the truth

Watching it all can seem like two parallel universes. Americans are getting their information about the trial from vastly different sources.

"He is standing and saying, 'No this isn't true,' " said Michael Stickler, defending Cliven Bundy outside the courthouse one afternoon.

Stickler is writing a biography about Bundy and his decades-long fight with the government. The two men met in jail recently, while Stickler was serving a federal prison term for tax fraud. Stickler says he quickly learned that Bundy is a man of conviction, believing so strongly that the government was overreaching he was willing to test federal law.

"There's a long tradition of Americans and even people outside of America who have stood, believed their convictions and stood against powerful forces," Stickler said.

Around the time of the standoff though, the Bundys frequently said they didn't recognize the federal government, let alone its legal right to control public land. A trove of TV news footage from the time shows militiamen pointing assault-style rifles at federal agents. Bundy's son Ammon, who is also on trial and was acquitted recently for organizing a similar standoff in Oregon, even told reporters their mission was to kick all federal agencies off the land.

"Where is the rule of law," says Erika Schumacher, a retired Bureau of Land Management law enforcement officer who led the federal response to the 2014 standoff on the ground.

Schumaker, who now teaches at the University of Nevada, Las Vegas, says she is worried a jury could sympathize with the Bundys' version of the truth, even though she largely considers it a myth.

She says given how the standoff unfolded, she is "not surprised that we're here today, where nobody really understands the truth or really wants to get to the bottom of what the truth actually is."

A previous version of this story misspelled Erika Schumacher's last name as Schumaker.