Accessibility links
Sen. Al Franken Accused Of Sexual Assault By LA Model And Radio Host The Minnesota Democrat put out a statement apologizing for the 2006 incident, in which he is accused of forcibly kissing a woman while on a USO tour and later groping her while she was sleeping. 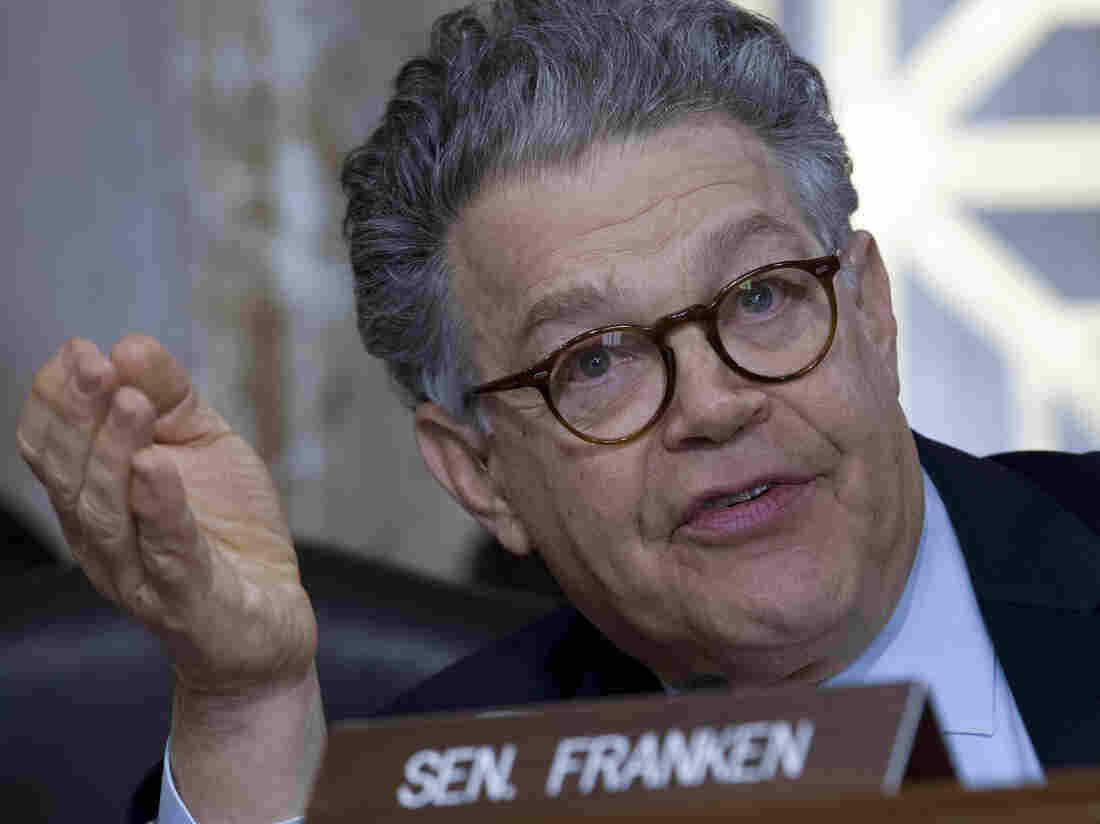 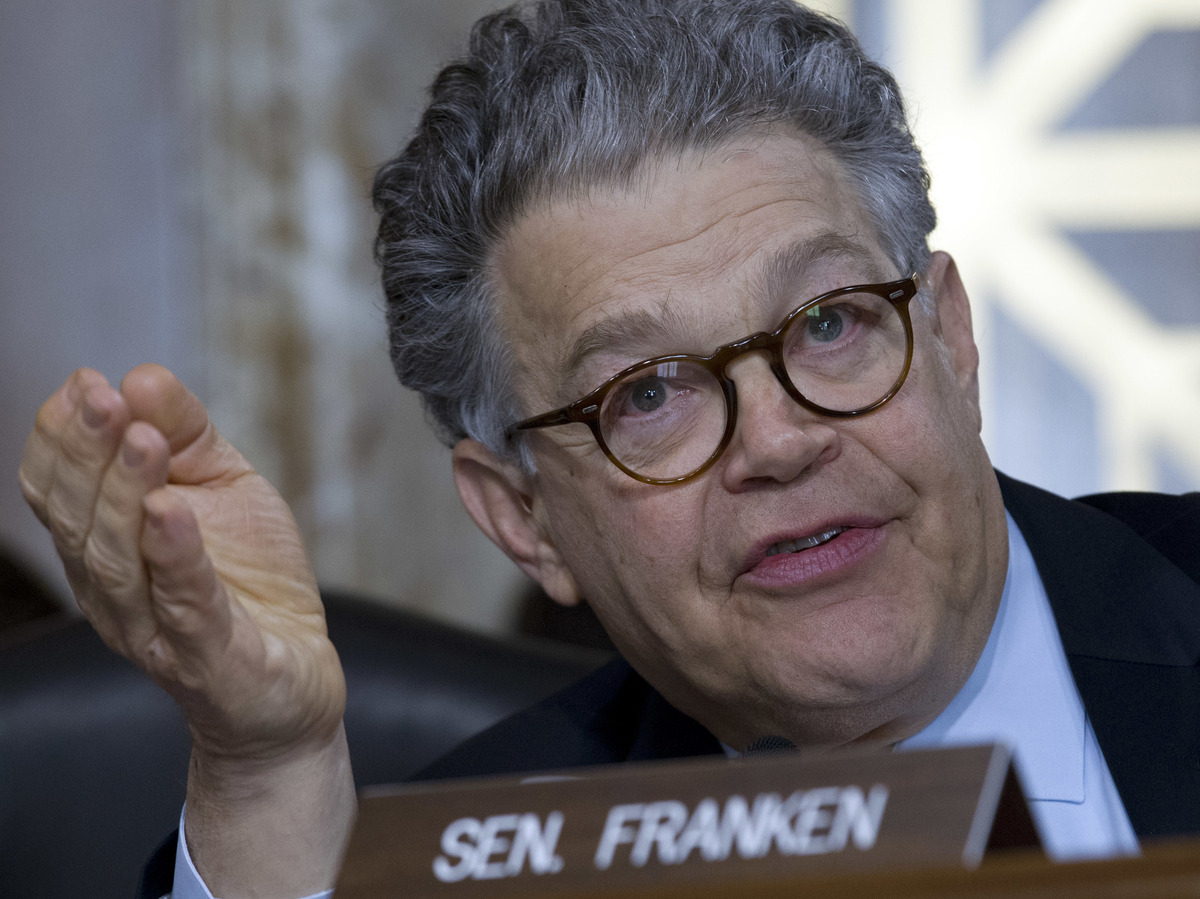 Another prominent public figure has been accused of making unwanted sexual advances. Los Angeles radio host Leeann Tweeden said now-Sen. Al Franken, D-Minn., forced himself on her and groped her while the two were on a USO tour in 2006.

Franken has apologized for his actions, calling them "inappropriate." Democratic and GOP leaders are now calling for a Senate ethics investigation, which Franken says he will cooperate with.

In a statement posted on KABC's website, Tweeden wrote that the incident occurred in December of that year, during a rehearsal for a USO holiday show in the Middle East. Franken, she said, wrote a skit in which he was to kiss Tweeden. She says Franken told her that "we need to rehearse the kiss."

Tweeden said she told the former Saturday Night Live star "something like 'Relax Al, this isnt SNL...we dont need to rehearse the kiss.' " But she said he insisted and she relented. "We did the line leading up to the kiss and then he came at me, put his hand on the back of my head, mashed his lips against mine and aggressively stuck his tongue in my mouth."

She said she felt "disgusted and violated" but didn't report it because "we were in the middle of a war zone" and "I didn't want to cause trouble."

She said that on the way back from the tour, onboard an Army transport plane, while she was asleep, Franken groped her. Her post includes a photo of Franken with his hands on her chest, looking back at the camera and smiling. She is asleep, wearing a helmet and flak jacket.

At the time, Franken was performing as a professional comedian before running for the Senate. Tweeden was on her ninth USO tour and was known at the time for her work as a TV host, sportscaster and model.

Franken described their performances on USO tours during a 2010 Senate floor speech in opposition to the "don't ask, don't tell" policy. "I was a kind of co-host with a beautiful woman named Leeann Tweeden, and we'd do comedy routines and we'd introduce music and introduce the cheerleaders," Franken said.

Franken issued an initial statement: "I certainly don't remember the rehearsal for the skit in the same way, but I send my sincerest apologies to Leeann. As to the photo, it was clearly intended to be funny but wasn't. I shouldn't have done it."

Later Thursday afternoon he put out an extended statement, apologizing further and asking for an ethics investigation with which he would "gladly cooperate."

In a news conference, Tweeden said, "Nothing like that is ever funny. I mean, is it funny if he does that to your sister or your daughter or your wife?"

On her own radio station she said that she wanted nothing from Franken. Tweeden said she spoke out now because "the tide has turned" and that she was inspired by the vocalness of Rep. Jackie Speier, D-Calif., who recounted her own experience with harassment as an aide on Capitol Hill in October and has been an advocate for change in reporting and training in Congress.

Tweeden's accusation against Franken came two days after a House hearing on what was described as a pervasive problem of sexual misconduct in Congress and also as Republicans urged Alabama Senate candidate Roy Moore to drop out of the race after numerous allegations of sexual misconduct, including assault, when his accusers were mostly teenagers.

"As with all credible allegations of sexual harassment or assault, I believe the Ethics Committee should review the matter. I hope the Democratic Leader will join me on this. Regardless of party, harassment and assault are completely unacceptable—in the workplace or anywhere else."

Sexual harassment is never acceptable and must not be tolerated.

I hope and expect that the Ethics Committee will fully investigate this troubling incident, as they should with any credible allegation of sexual harassment.

Re Al Franken: I’m shocked and concerned. The behavior described is completely unacceptable. Comedy is no excuse for inappropriate conduct, and I believe there should be an ethics investigation.

I support an ethics committee investigation into these accusations and I hope this latest example of the deep problems on this front spurs continued action to address it. https://t.co/i0ooPDuG4E

White House press secretary Sarah Sanders offered no comment on Franken beyond saying that the White House believes an ethics investigation is "an appropriate action."