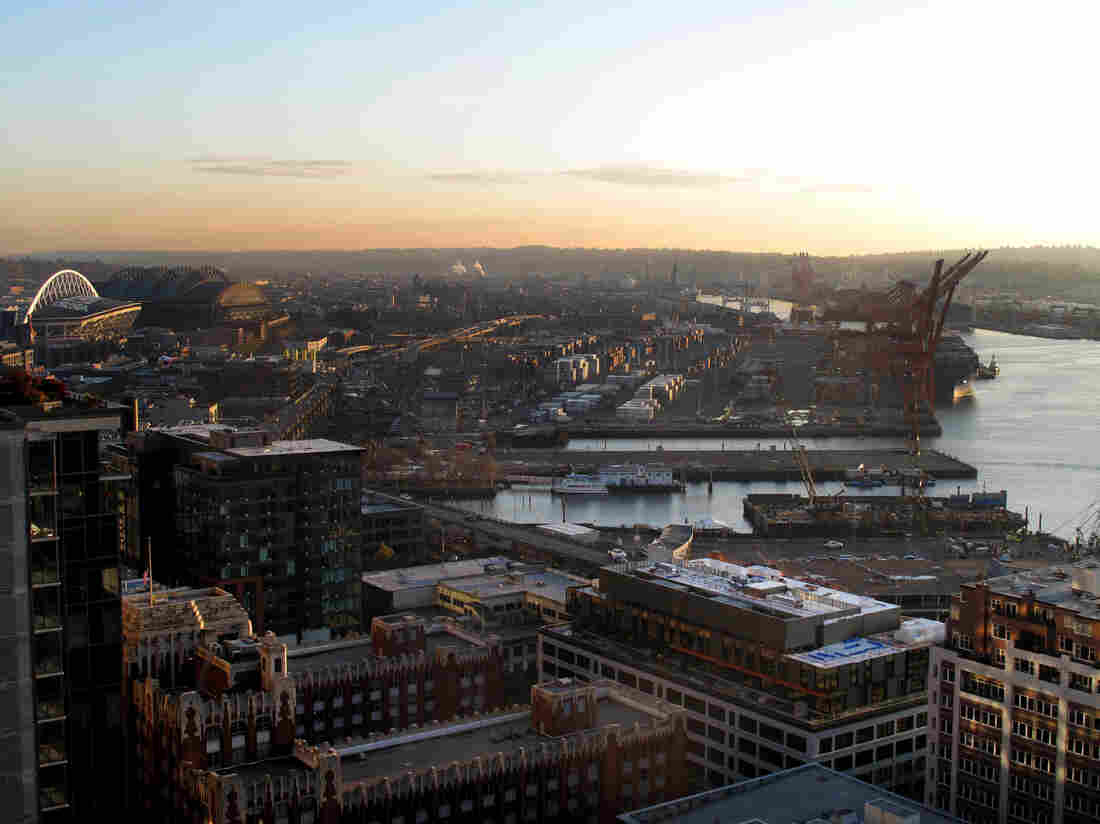 A view of the Port of Seattle and the city's stadium district nearing dusk. On Friday, a trial court judge is scheduled to hear legal challenges to the city's new income tax on the wealthy. Anna Boiko-Weyrauch for NPR hide caption 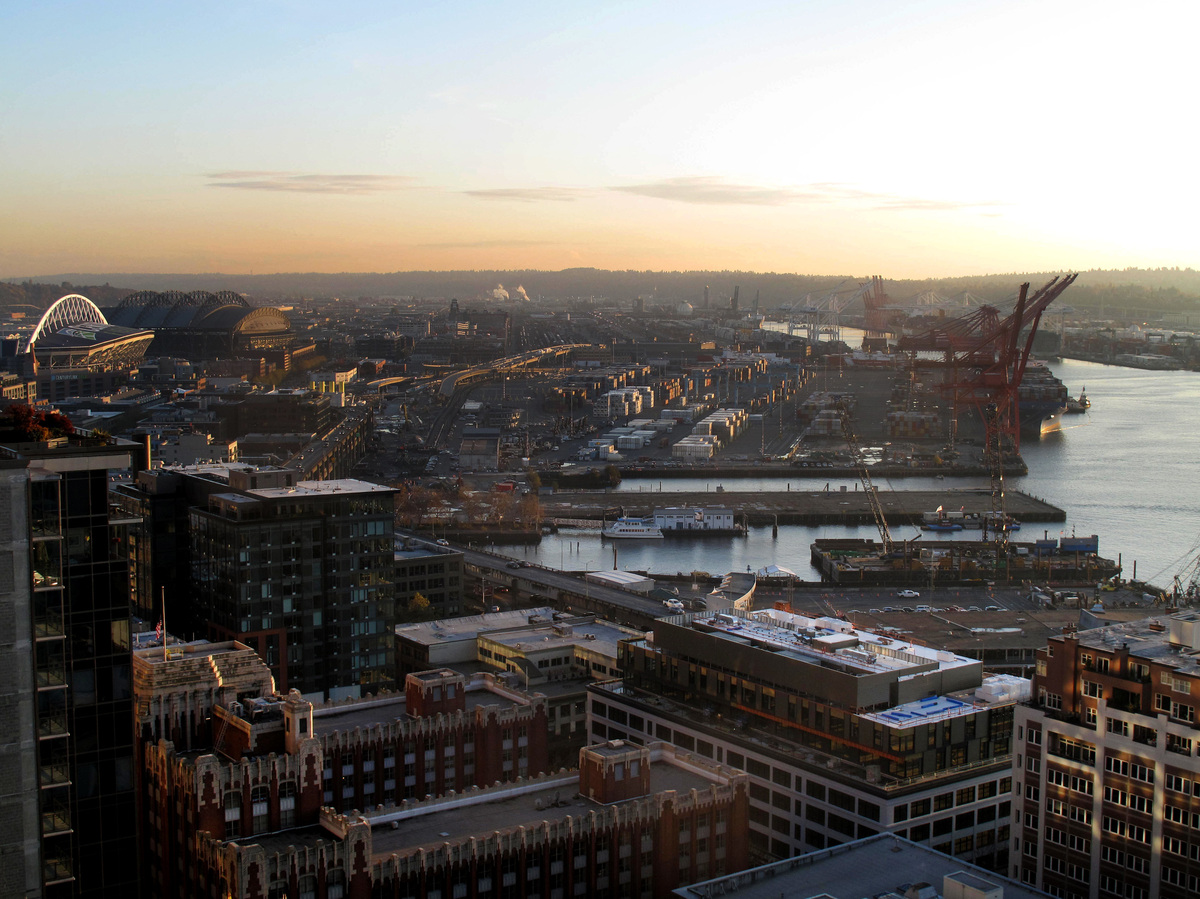 A view of the Port of Seattle and the city's stadium district nearing dusk. On Friday, a trial court judge is scheduled to hear legal challenges to the city's new income tax on the wealthy.

Documentary filmmaker Christopher Rufo doesn't make enough money to have to pay Seattle's new high-earners tax, but he still wants to keep Seattle income-tax-free. So much so, he joined around 30 plaintiffs suing the city.

On Friday, a trial court judge is scheduled to hear legal challenges to the city's new income tax on the wealthy, approved this summer by the Seattle City Council to raise revenue for services in a state that does not have an income tax. Proponents say the tax is needed to address the city's livability issues, such as affordable housing, homelessness and public transit, which have grown as high-paying tech companies like Amazon have boomed.

Rufo does not want Seattle to end up like Youngstown, Ohio, one of the steel industry towns in his upcoming PBS film on economically depressed American cities. His footage of Youngstown, playing on the screen in front of him, shows a backhoe chewing through a white two-story house, reducing it to shards within minutes.

"Pretty much the only economic activity that you'll see in some of these neighborhoods is the demolition industry," he says.

The message of his research is this: "We can't take the prosperity for granted. Eventually the tech industry will either slow down, or shrink, or as we're seeing with Amazon, move somewhere else," Rufo says.

Amazon is considering proposals right now for a second headquarters. The company received 238 bids before its October deadline. 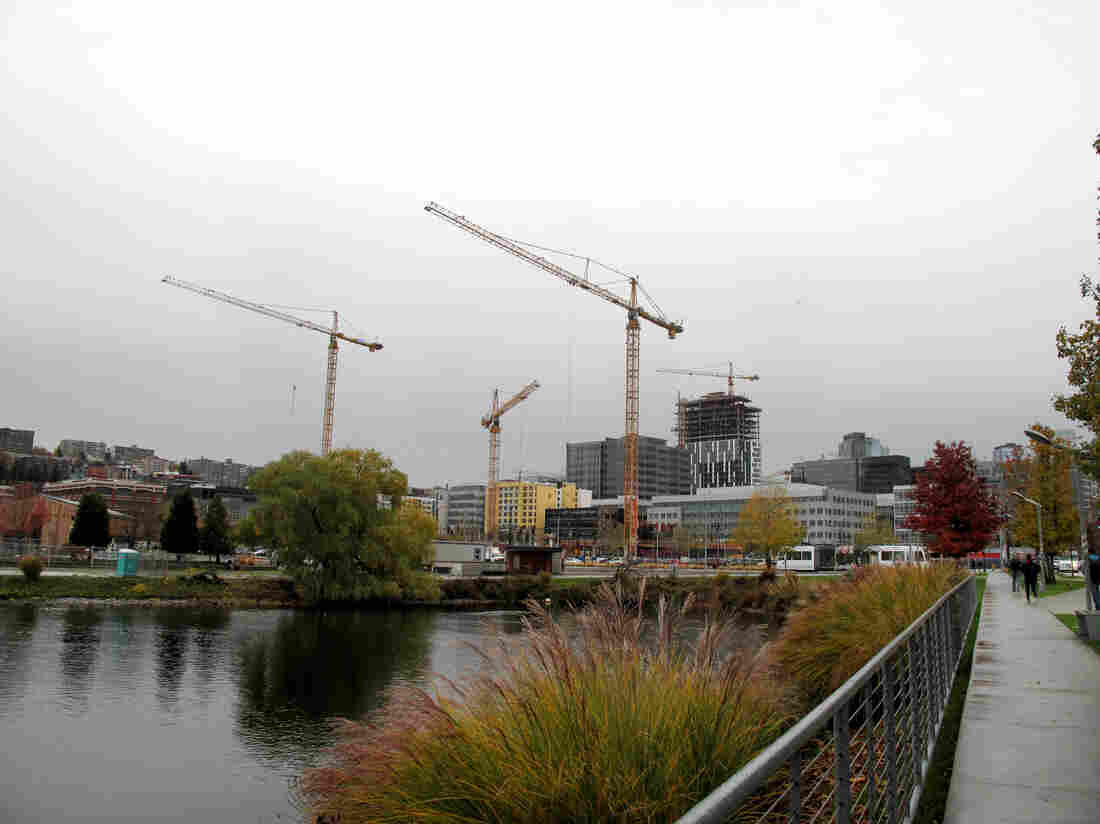 Cranes poke out of the ground in Seattle's South Lake Union neighborhood, the heart of Amazon's headquarters. Anna Boiko-Weyrauch for NPR hide caption 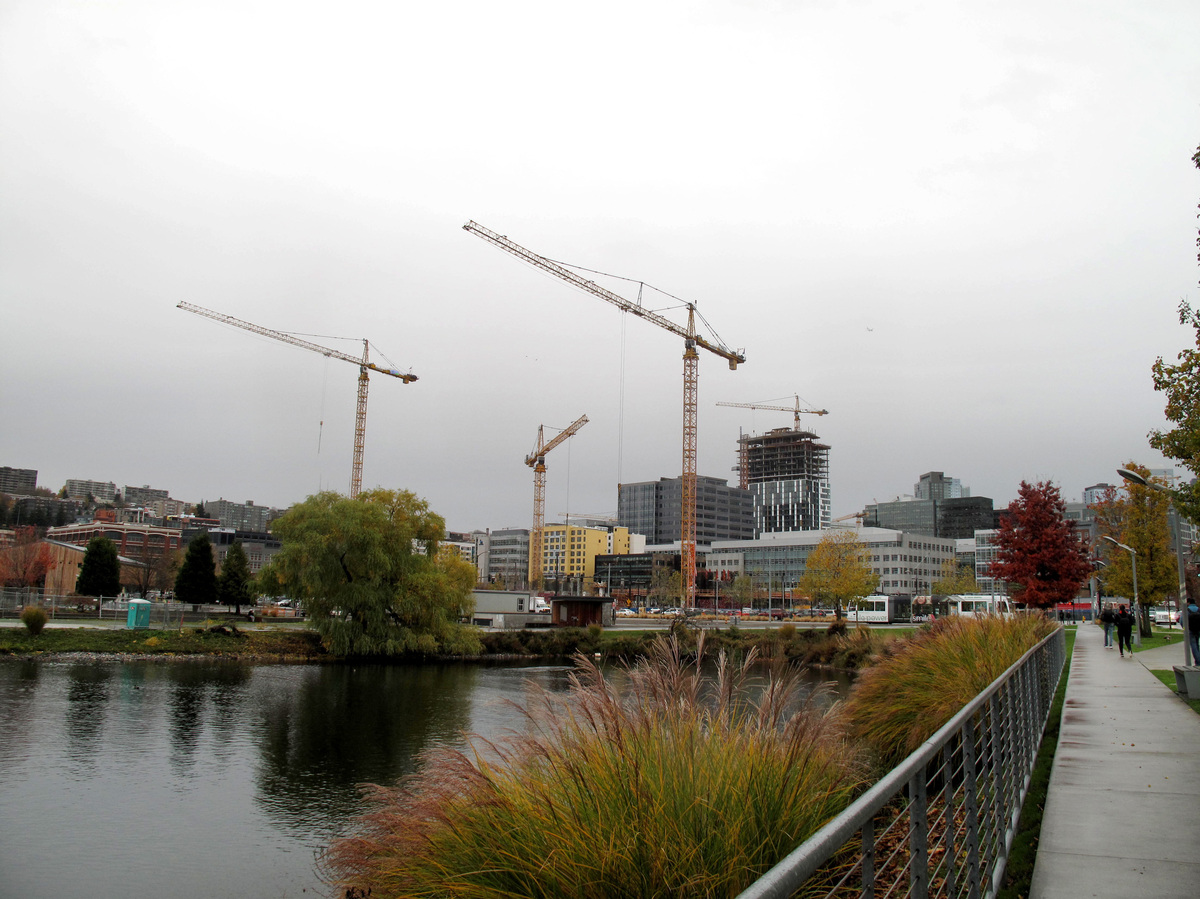 Cranes poke out of the ground in Seattle's South Lake Union neighborhood, the heart of Amazon's headquarters.

In enacting the income tax Seattle is going against a state Supreme Court precedent from the 1930s when the state Constitution was amended to include an extremely broad definition of property, says Republican Rob McKenna. He served two terms as Washington's attorney general and now represents the plaintiffs in this lawsuit.

The new definition included "anything tangible or intangible, subject to ownership," McKenna says. "The Supreme Court ruled that that definition being as broad as it is, encompasses income."

Another clause in the state Constitution mandates all property be taxed the same, so all income must also be taxed uniformly, he says. And because state law doesn't allow for an income tax, cities can't impose one.

On the other side is Paul Lawrence, an attorney litigating the case on behalf of the city of Seattle.

"There's no provision in the state Constitution that says you can't have an income tax," he said.

Instead, what's preventing a state income tax is an interpretation — a wrong interpretation, Lawrence says. Because, he says, income is not property.

"It comes to you; you then take it and turn it into property — whether it's a stock or bond or a piece of property — but it's a very different type of thing," he says.

And income, he says, should be allowed to be taxed under Washington state law.

Some business owners support the tax. Molly Moon's Homemade Ice Cream chain founder and CEO, Molly Moon Neitzel, is in favor of it to fund the city's pressing needs, like affordable housing, she says. She doesn't earn enough to be taxed, but hopes one day to be taxed more on future high income, "so that [her] employees can have a better quality of life in the city of Seattle."

Washington state is often said to have one of the most regressive tax structures in the nation, because of its reliance on property and sales taxes. Ideas for new taxes come out of Seattle city hall all the time.

It's not the tax structure that keeps her business in town, Neitzel says, but rather "the community, the kinds of things people want to buy here, how beautiful it is."

Downhill from her shop, near the shore of Lake Union, is the heart of Amazon headquarters. New office buildings and high-end condos are everywhere. And so is a question: how to respond to all this growth and all this money?

Whichever side loses initial volleys over the new tax will probably appeal it to the state's highest court.