Accessibility links
Maybelle Carter, The Mother Of Popular Country Music Known as "Mother Maybelle," Carter had a unique style of playing that helped determine the role of guitar in modern country music. Johnny Cash called her "the greatest star I've ever known." 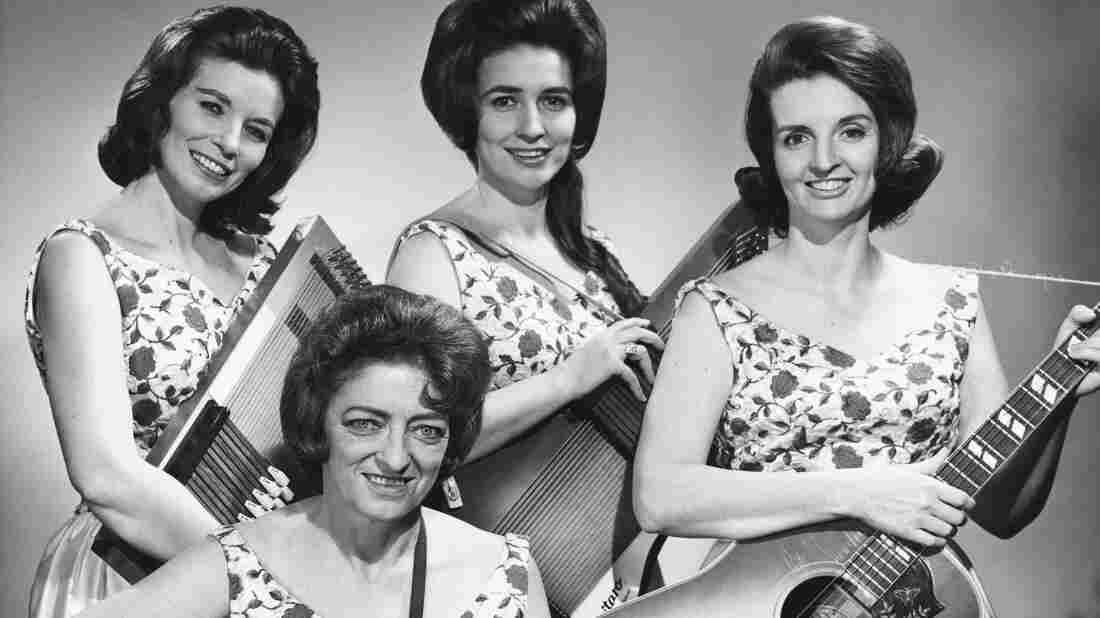 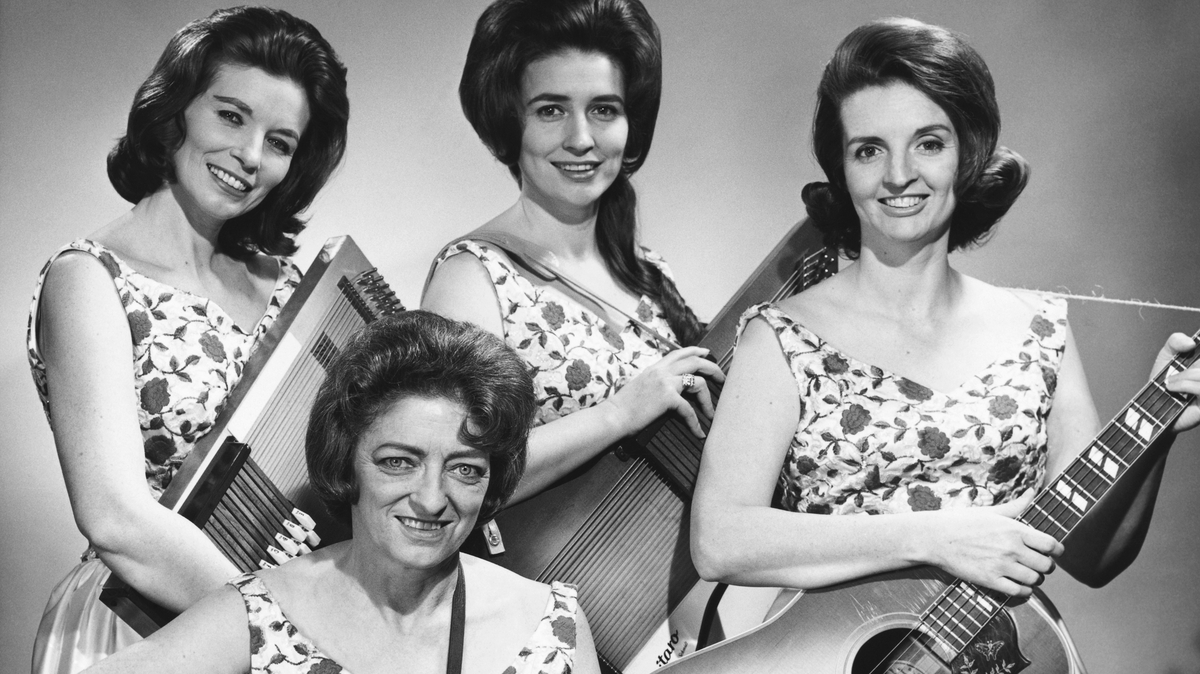 With sharp features and piercing blue eyes, Maybelle Carter (born Addington) was a guitar prodigy and a curious, confident musician. She is known as "Mother" Maybelle Carter — a title that fittingly represents her relationship to country music. Like a mother shapes her child, Carter determined the role the guitar played in modern country. By playing in family bands and keeping her offspring close, she found a way to manage parenting and playing at a time when many women were trapped at home.

In 1926, she married Ezra Carter; the next year, Maybelle joined a hillbilly music trio, The Carter Family, with her cousin Sara Carter and Sara's husband — and Ezra's cousin — A.P. Carter. At first, the group played schools, churches and community halls in Virginia's breathtaking Clinch Mountains. But the act's career and a genre were born with a single bumpy car ride from their home in Maces Springs, Va., to Bristol, Tenn.

It was brutally hot that Aug. 1, 1927 and Maybelle was 8 months pregnant. RCA Music's Ralph Peer was recording "hillbilly music" talents at the 1927 Bristol Sessions, scoring wins with the Carters and yodeling singer-songwriter Jimmie Rodgers. Because of these recordings, Bristol is now home to Smithsonian-affiliated Birthplace of Country Music Museum.

On the second day of the Carter Family sessions, only Sara and Maybelle showed. While A.P. fixed a busted flat tire on their car, the two cousins sang a folk song of the era called "Single Girl, Married Girl." In their deep voices, the women sang lyrics that delineate the enduring trials of motherhood: "Single girl, single girl/She goes to store and buys ... Married girl, married girl/She rocks the cradle and cries." The tune was one of the group's most popular at that time. Together, the Carter Family largely recorded and performed folk, gospel and blues songs that A.P. gathered from the rural countryside, preserving them in the canon of American music.

With her unique style of playing, Maybelle changed how the guitar functioned in both hillbilly music (as it was called at the time) and in modern country music (as it's known today). Beth Harrington, director of The Winding Stream, a documentary about the Carter Family, explains that in the 1920s, when the group formed, guitar was considered a percussive instrument. Like a mother expertly coaxing a shy, gifted child to centerstage, Maybelle Carter's influence pushed the guitar to the fore. With only one guitar and an autoharp, she crafted the Carter Scratch style, which involves playing harmony and rhythm at the same time, making the group's sound more robust. Harrington says Maybelle had a hankering for novelty and a sponge-like absorption of other guitar styles. So after she learned to play blues guitar from black guitarist Lesley Riddle, A.P.'s collaborator in collecting music, she combined that style with her adept banjo-playing to create the Carter Scratch.

In the winter of 1938, the Carter Family moved to Texas to play weekdays on border radio station XERA's "Consolidated Chemical Hour." For three years, the family typically started each episode with the song "Keep on the Sunny Side." This regular work offered Sara and Maybelle the opportunity to play music while keeping their kids close. At first, only the Carter Family trio performed; soon, the members' children also sang with them. By the third year, A.P. left and Maybelle's daughters played even more often. Maybelle's daughter Anita remembers all the children joining their parents to sing, then sleeping in her mother's guitar case. It was a perfect setup for Maybelle. Living on the border also influenced the group's music, as Maybelle loved Mexican guitar styles and incorporated them into her playing.

Though the band endured A.P. and Sara's divorce, it didn't withstand Sara moving to California to settle down with A.P.'s cousin Coy Bayes in 1944. But the circle never broke for Maybelle. In the '50s and '60s, she toured with her daughters — Helen, Valerie June and Anita — as Mother Maybelle and the Carter Sisters. Ezra, her husband, acted as the group's manager, and famed guitarist Chet Atkins joined the group in 1949. They landed a Grand Ole Opry gig in 1950.

For a period in the early '60s, Maybelle worked as a nurse with the elderly, playing the Opry on weekends. But when A.P. died in 1960, Maybelle and her daughters changed their act's name from Carter Sisters back to the Carter Family and toured with Johnny Cash. Though Maybelle's daughter June was Cash's romantic interest and future wife, Maybelle was his hero. Cash modeled his guitar playing after hers, and described her as the "greatest star I've ever known."

In 1963, Maybelle joined up with the New Lost City Ramblers and Mike Seeger to play for throngs of adoring fans at the Newport Folk Festival. She also recorded six solo albums between 1960 and 1973, and reunited with her cousin Sara for an album in 1965: the aptly titled An Historic Reunion. A perfectionist, she switched to autoharp once arthritis made it hard for her to play guitar. Her aptitude in her later career was evidenced in a 1970 performance on The Johnny Cash Show; he introduced her as having "the most imitated style of pickin' in our music." A dark gray beehive on her head, she hugs the autoharp close next to her ear, shooting sly smiles.

In 1973, Maybelle also recorded a song on The Nitty Gritty Dirt Band's celebrated album, Will the Circle Be Unbroken album. She and Ezra moved to Florida to retire and fish just before his death in 1975; she died three years later in 1978. Her influence is still celebrated today; her family has made sure of it. A.P.'s daughter Janette helped to ensure her musical legacy survives by creating the Carter Family Fold, a nonprofit performance center that offers weekly performances to keep hillbilly music playing on in the Virginia mountains.