Accessibility links
'Bunk' Is Encyclopedic, Fascinating — And Frustrating Kevin Young's new book puts forth an instantly convincing pairing of race and hoaxing — both a "fake thing pretending to be real." But he loses readers' trust with knotty, overly aphoristic writing.

'Bunk' Is Encyclopedic, Fascinating — And Frustrating

'Bunk' Is Encyclopedic, Fascinating — And Frustrating 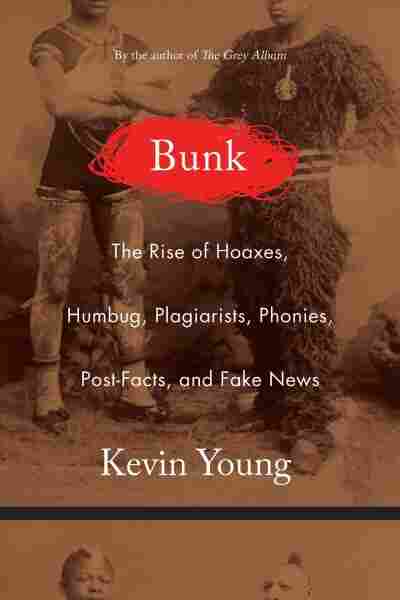 Hoaxes work when we want them to. These longings can be benign: think of Herman Rosenblat's beautiful, fake story about a girl who kept him alive by throwing apples over the fence of a concentration camp, and meeting her years later on a blind date. Who wouldn't want to believe a love story like that? Or they can be malign: Think of "Jimmy," the black, 8-year-old heroin addict invented by Washington Post reporter Janet Cooke. What does our national eagerness to believe that story say about us?

In Bunk, an encyclopedic, fascinating and frustrating new book, Kevin Young, the New Yorker poetry editor, interrogates social structures that prop up the hoax. From Joice Heth — a black woman P.T. Barnum put on display as the supposedly 161-year-old nursemaid to George Washington — to Jimmy to Rachel Dolezal, race and hoaxing "go hand in hand," he writes. That's because race, too, is "a fake thing pretending to be real."

All these imaginary black Americans act as projection screens for attitudes and biases — and so illuminate who we are and what we believe. "For the hoax reminds us, uncomfortably, that the stories we tell don't just express the society of the self, they construct it." This pairing of race and bunk is immediately and instinctively convincing.

But Young has a knotted, clotted style, as if making notes for himself rather than others, testing out phrases, not quite bothering to write clearly or cleanly. He loves academic punning and jargon, and will often choose alliteration or puns over sense. And he can be aphoristic to the point of meaninglessness: "The first rule of influence is that there isn't any. The second rule of influence is that it is everywhere," or "The history of the hoax is chiefly the hoaxing of history."

A Book On 'Bunk' For Our Post-Truth Times

Recent well-edited New Yorker excerpts of the book reveal how superficial some of these problems are: Clarified, cut, and contoured for the magazine's website, Young's writing on an 1835 moon hoax, for instance, becomes clear where it felt congested.

Writing, too, is an economy of belief. That is most obviously true with novels, which ask for the reader's faith, but also with nonfiction, which relies on what I suppose you could just call trust. Young, surely unintentionally, has a habit of saying things that sound great but mean little. These erode trust, build frustration, and ultimately feel like gentle cons or hoaxes of their own; phrases onto which we can project whatever meaning we like.

There may be no second acts in American lives, but there are, we hope, second editions.

To be clear, I don't think this is actually bull. I suspect Young often means something very specific — I'm just not sure what that is. Though his writing has some of the linguistic tricks and trappings of bull, Young has obviously done his research. He is lavish with references and quotations (some of which show his muddy writing up by comparison), so Bunk is endlessly useful if you want to find a body of literature on one kind of hoax or another.

In reviewing books, we measure them against what they try to do — which means criticizing an impressive accomplishment like Bunk because it doesn't live up to its extraordinary ambitions. But the aspects that fail aren't even the hard parts, the research and analysis, but the easy parts, clarity and cohesion. There may be no second acts in American lives, but there are, we hope, second editions.