Accessibility links
In 'Body Music,' Love Is Sweet, Sexy And A Touch Sentimental French graphic novelist Julie Maroh — author of Blue is the Warmest Color — is back with an earnestly sweet collection of vignettes about love, kept from being saccharine by her skill with faces. 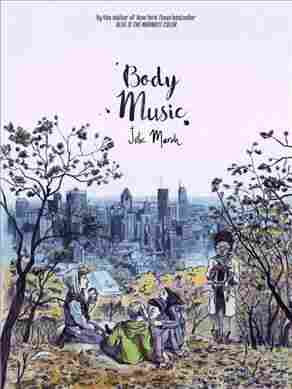 by Julie Maroh and David Homel

What a treat to see Julie Maroh once again writing about young love! It's hardly an unexplored topic, but the French artist has a knack for making it crackle. In her 2010 graphic novel Blue Is The Warmest Color, the emotions that sparked when the main characters locked eyes practically burned up the pages. That book was far from perfect, but it was easy to see why it won such wide acclaim and inspired an award-winning movie.

Now comes Body Music, a collection of 21 vignettes about love. Like Blue, it's not without problems, but Maroh's earnest romanticism buoys it over the trouble spots. Her compassion for human foibles made Blue's tale of two average French girls stand out among a million other love stories. As in that book, the characters in Body Music behave just like real people in love — bumbling along, second-guessing themselves and hurting each other — but their pure hearts and capacity for self-scrutiny set them apart from most of the lovers you'll encounter in real life. How often, really, do we act as our best selves in our amorous pursuits? Maroh imagines a world in which we almost always do.

The stories here are simple. Two people click at a baseball game in a city park. A cyclist stews about a lovers' quarrel. A couple try to recreate the conditions under which they first met. Maroh brings fervent lyricism to each situation, vaulting the characters into flights of eloquence. She writes like that intense, interestingly dressed girl from your high school who was always scribbling poetry in the back of her math notebook — only she's a lot nicer. When the brooding cyclist catches his front wheel in a hole and falls off his bike, he thinks not of his limbs but of his love. "It's physical — the terror of watching our relationship slip between our fingers like water, and we can't hold it back," he muses, lying on the ground. "Do we have to get this low to finally understand that the other person matters?"

In Emotionally Charged 'Blue,' Sex Is Graphic, But Not Gratuitous

Sentiments like this border on sappiness, and sometimes descend into it, but Maroh manages to makes the book work anyway. She's just so achingly sincere in her fondness for her characters, you feel like the worst kind of cynic for resisting her.

Her skill at, and interest in, drawing faces is a big help in keeping cynicism at bay. Instead of aiming, like many comic artists, to encapsulate each character through a few repetitive devices, she seems to build up each face from scratch. She standardizes some things, but she'll subtly alter a figure's mouth or eyebrows each time she draws them. The characters' faces change so much according to their feelings, they sometimes seem like different people from one panel to the next. It lends tremendous interest to stories in which they're just puttering around or lying in bed, thinking and talking about the objects of their affections.

'Body Music' may be a little too sugary, but its sweetness is craveable for good reason.

But that's understandable. It's hard to be idealistic without giving way to preachiness from time to time. Body Music may be a little too sugary, but its sweetness is craveable for good reason.