Accessibility links
NPR Music 10: 2014 2014 began with a Frozen streak, included some stumbles (U2 and Apple, we're looking at you) and closed with an R&B revelation.

Listen to a discussion about the music of 2014

Read and listen: Memories from the year when Macklemore beat Kendrick Lamar, Outkast came back (but not all the way back) and a cartoon froze out the pop competition. (Plus, a note about the 'vinyl revival.')

Listen to a discussion about the music of 2014

Frozen is the the biggest album in the country 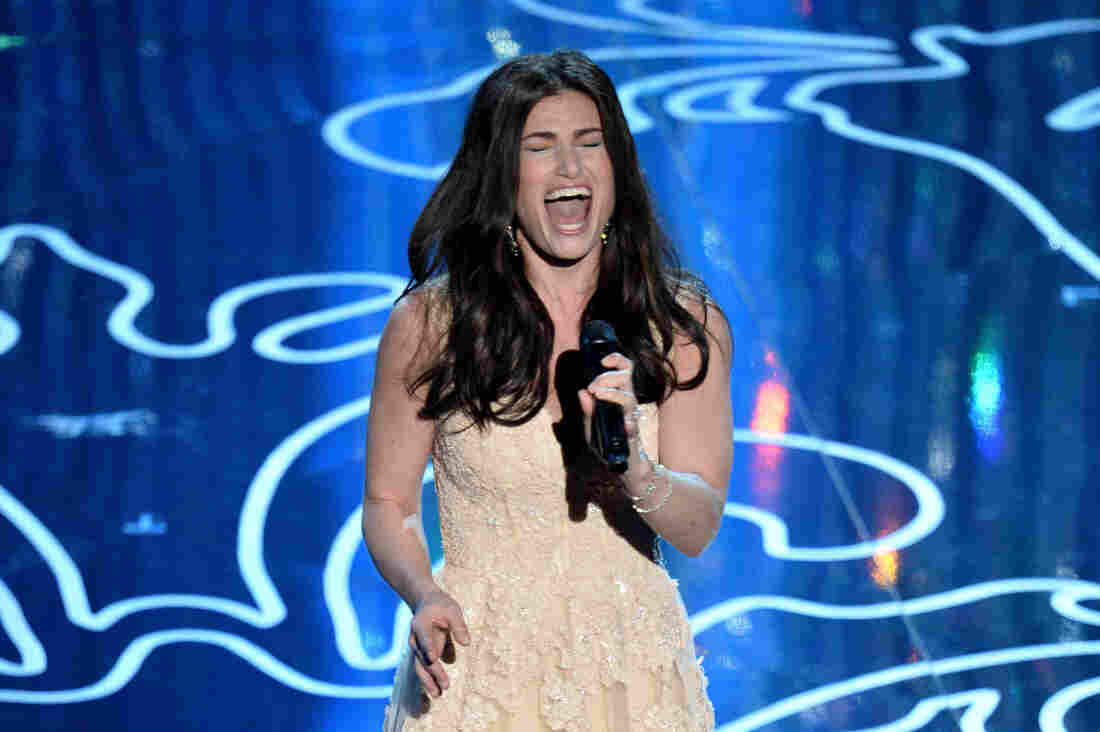 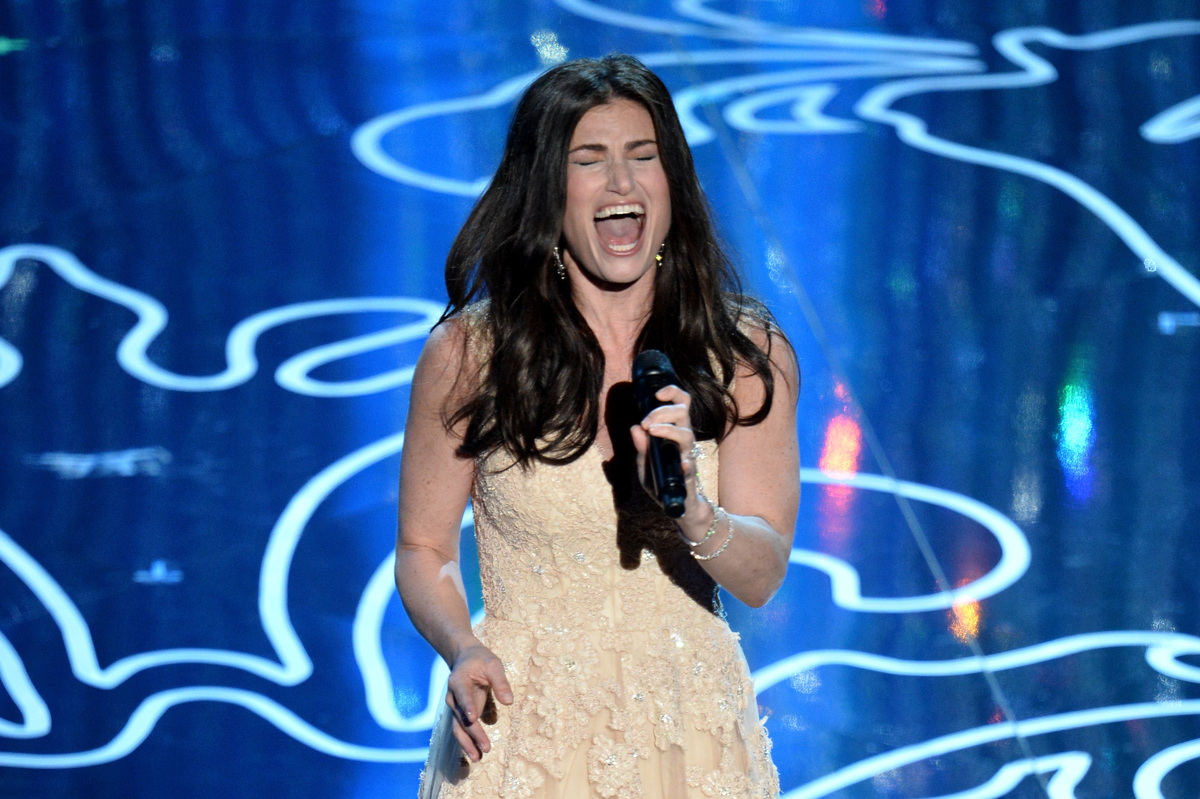 Actress and singer Idina Menzel performs during the Academy Awards at the Dolby Theatre on March 2, 2014 in Los Angeles.

Led by Idina Menzel's version of "Let It Go," which wasn't even supposed to be a single (but which is now echoing through the minds of every parent of a child aged 3-13), the soundtrack to Disney's retelling of the fairy tale of "The Snow Queen" topped the Billboard album chart in early January and stayed there for 13 weeks. 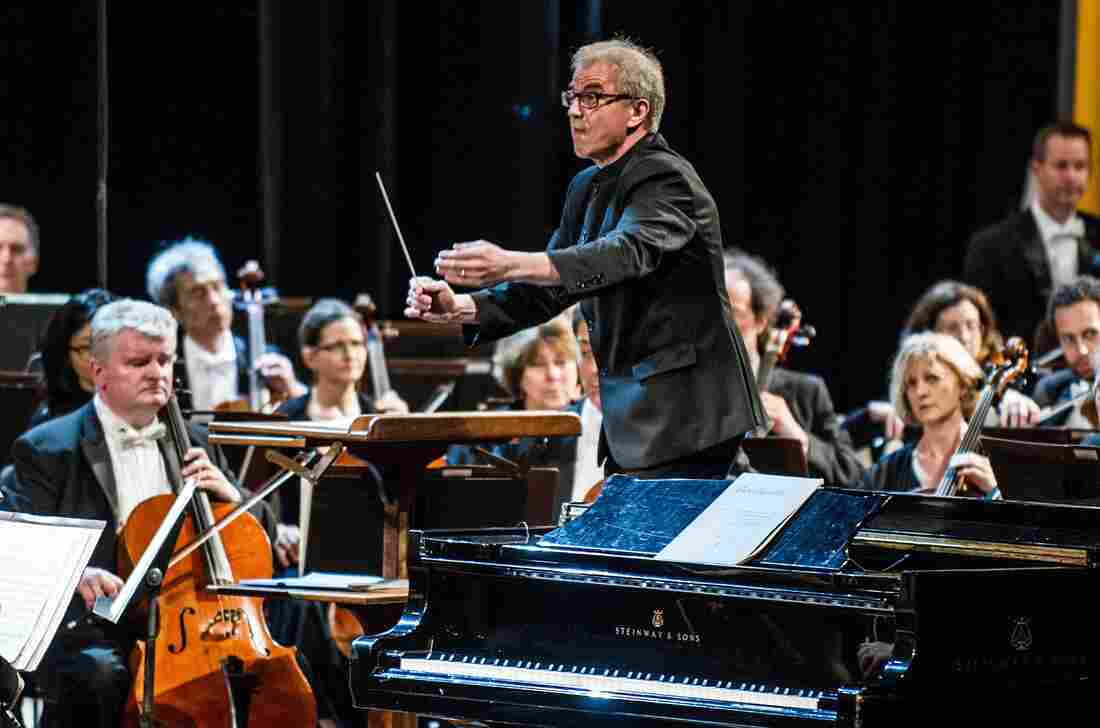 The Minnesota Orchestra, under the direction of conductor Osmo Vänskä (center), performs at the Cuban National Theater in Havana on May 15, 2015. Yamil Lage/AFP/Getty Images hide caption

Due to bitter a labor dispute, the Minnesota Orchestra hadn't performed since October of 2012, but a deal (which involved the musicians taking pay cuts to resolve millions of dollars in losses) brought them back to work in early 2014.

Macklemore & Ryan Lewis sweep the hip-hop categories at the Grammys 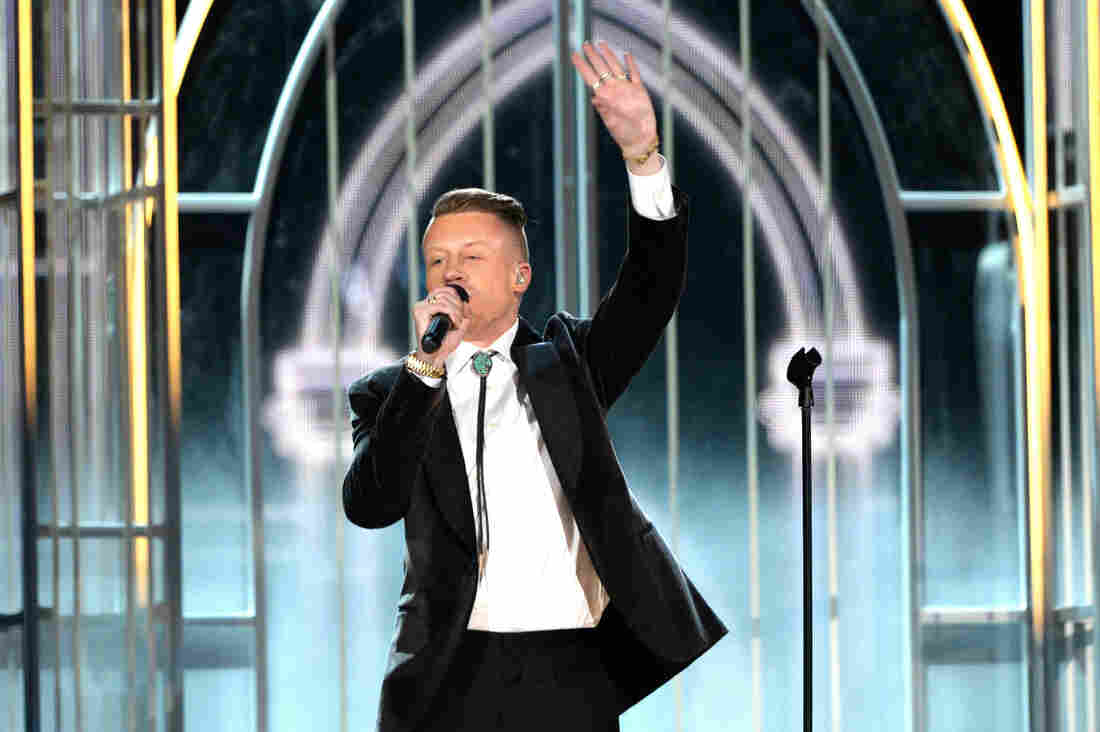 After winning best rap song, best rap performance and best rap album (not to mention best new artist), Macklemore and Ryan Lewis ceritified their place in pop music. But yeah, Macklemore had to make it awkward with a text to Kendrick Lamar, which he then screencapped and posted to Instagram: "You got robbed. I wanted you to win. You should have. It's weird and it sucks that I robbed you."

Renée Fleming performs the national anthem at the Super Bowl 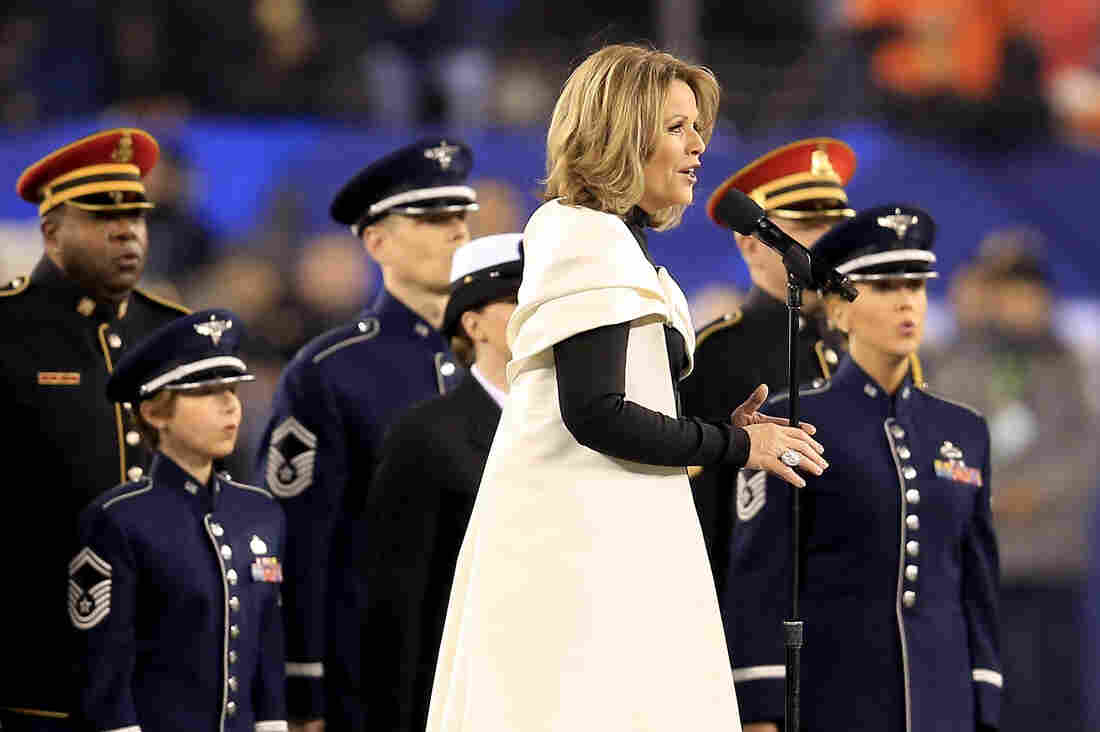 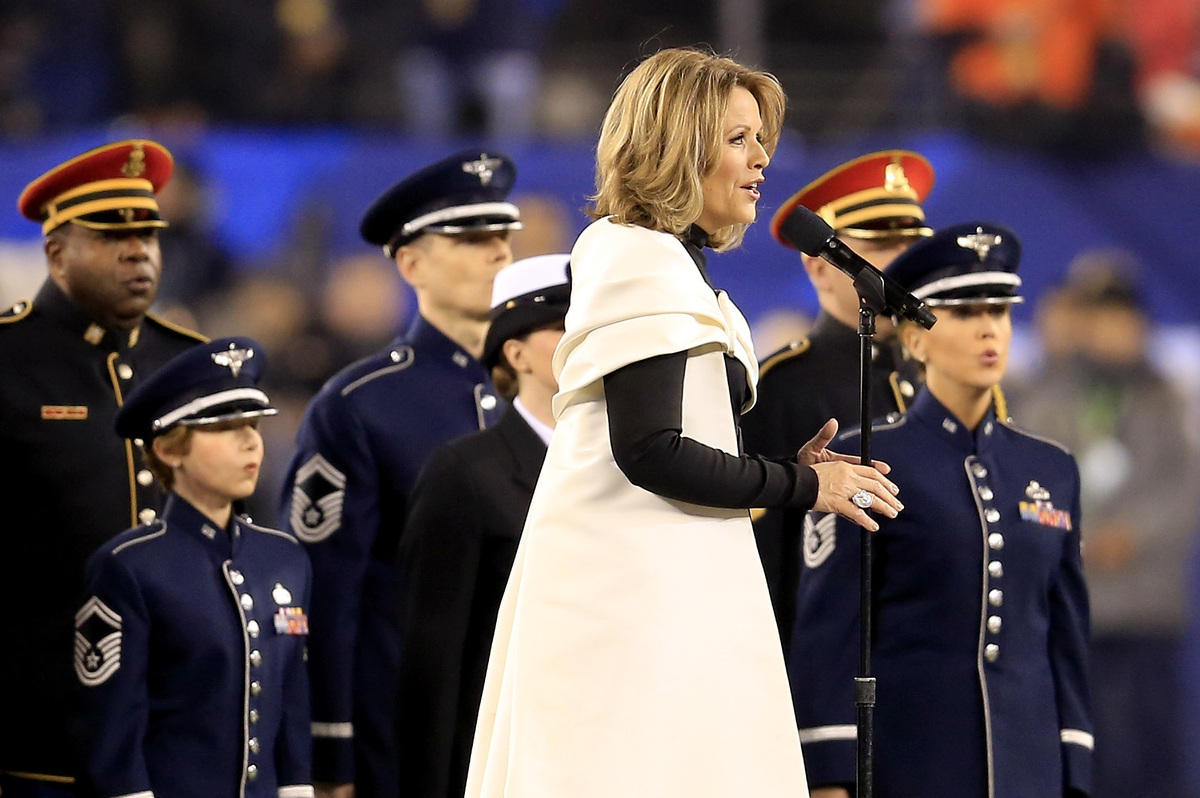 Renée Fleming sings the national anthem before the Seattle Seahawks take on the Denver Broncos during Super Bowl XLVIII at MetLife Stadium on Feb. 2, 2014 in East Rutherford, N.J.

This event shouldn't be notable — an acclaimed, virtuosic singer gets her shot at a demanding solo with room to show off in front of a huge crowd who knows every word — but since this marked the very first time an opera singer was given the job of singing at the Super Bowl, we'll note it, shake our heads, and move on. 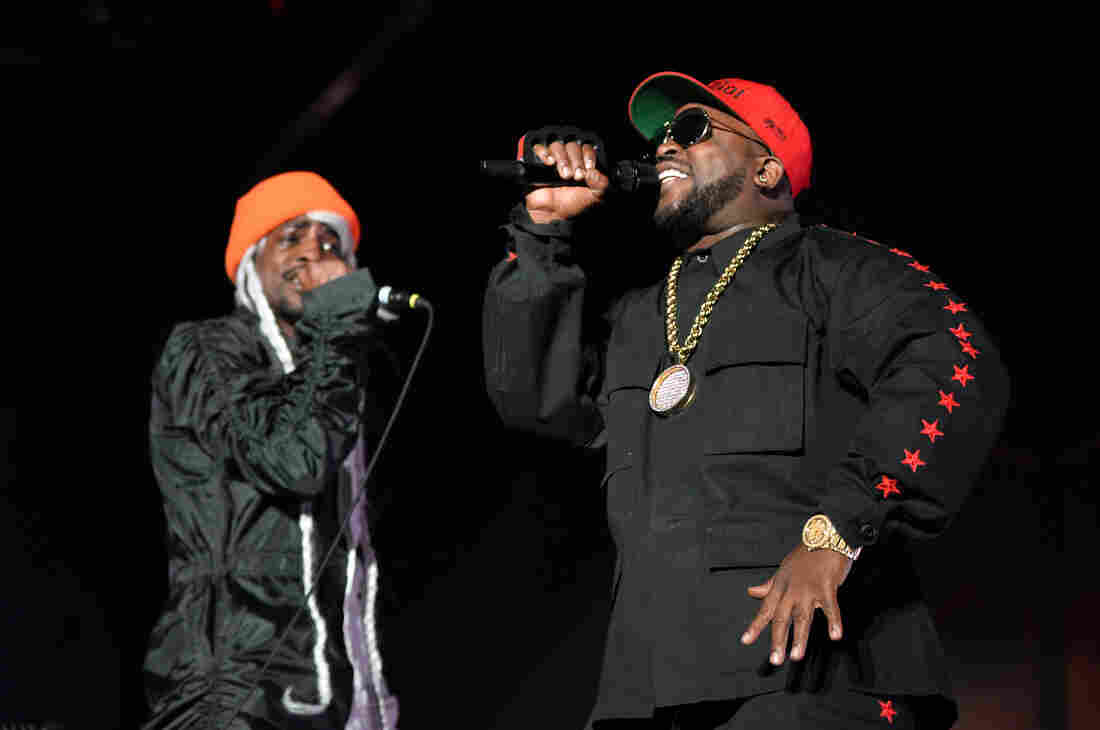 OutKast's headlining spot at Coachella was supposed to be the victorious start of the duo's 20th anniversary reunion tour, but it felt a little awkward: too many casual fans, not enough devotees. Thankfully, Big Boi and Andre 3000 ended big with three triumphant nights in their hometown of Atlanta.

The "vinyl revival" peaks with the release of Jack White's Lazaretto

As sales of compact discs withered like Shrinky Dinks in the heat of piracy, MP3 sales and then streaming services, media and certain corners of the recording industry hailed one area of commercial growth: the good old LP. Never mind that double-digit growth in a long-neglected sector still added up to less than 4 percent of units moved on CD or MP3. Vinyl presses were at capacity, prices were going up and trend pieces needed to be written.

So consider Jack White's Lazaretto the totem of a true-but-overhyped story. Not the music, which fit into White's repertoire of stark, muscular rock. Just the album's "Ultra LP" vinyl release, which featured so many gimmicks (two tracks hidden under the center labels, one of which played at 45rpm, the other at 78rpm; one song that had both an acoustic and an electric intro, depending on where you dropped the needle; a locked groove on the outside edge of side A; a hand-etched hologram that would emerge when the record spun on a turntable; more if you can believe it) that White started to seem like vinyl's own Dr. Moreau, creating implausible monsters in his Third Man workshop in Nashville. Of course, Lazaretto was the best-selling vinyl album of 2014, but that year was also a peak for the format; in 2015 vinyl's growth began to slow again. --Jacob Ganz 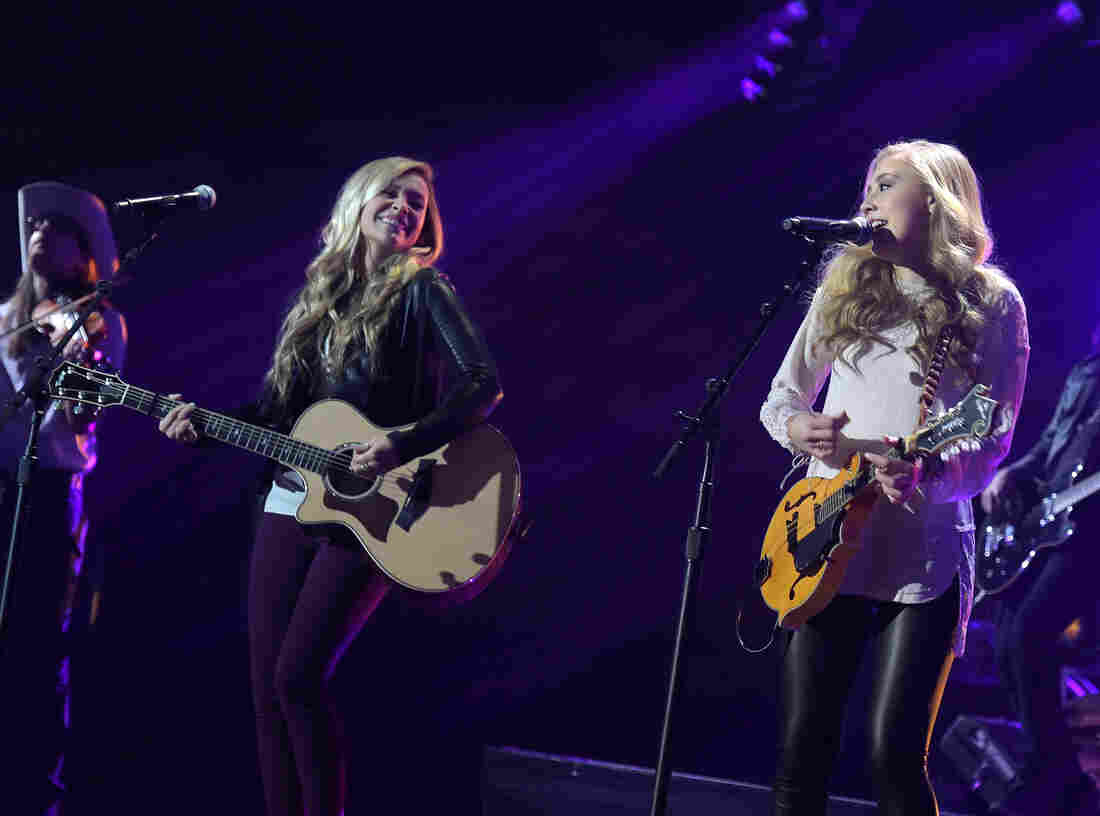 The macho scourge of so-called "bro country" music received a swift antidote in this No. 1 hit sung by two teenage girls who weren't going to paint on their jeans and get in the back of a truck for anyone.

U2 and Apple release Songs Of Innocence 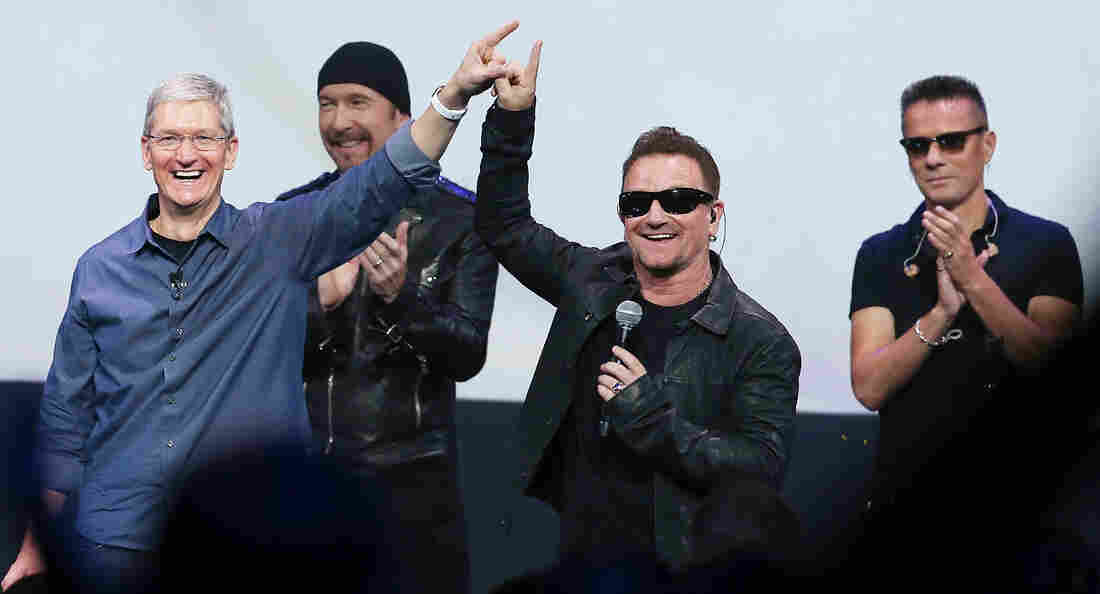 The stunt, explained by Bono as an attempt to reckon with the fact that the band knew it would need to do something unexpected to win the attention of a fractured marketplace, involved Apple automatically loading U2's latest album into the library of every iTunes customer for free. The Edge called the move "incredibly subversive. It's punk rock, it's really disruptive." Many others called it spam. 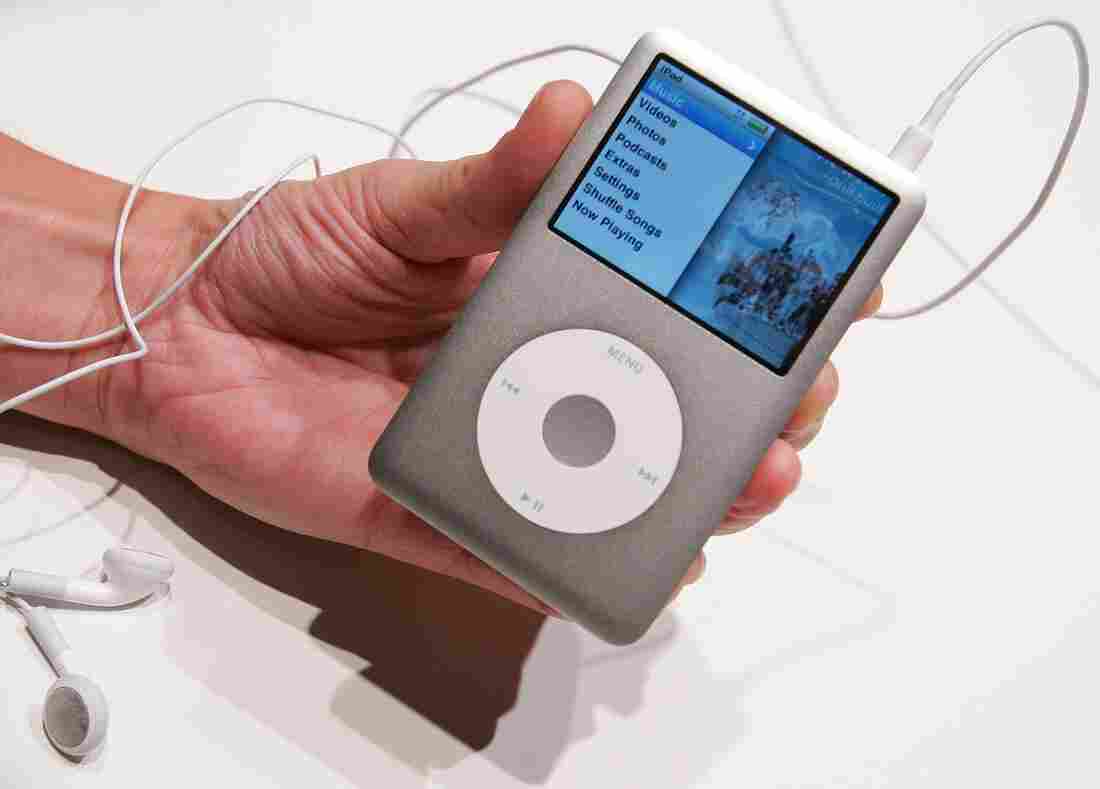 The new iPod Classic is held at the UK launch of the product at the BBC on Sept. 5, 2007 in London. Cate Gillon/Getty Images hide caption

On music's post-2000 journey from vinyl binders to tiny touchscreens, the iPod Classic is a phantom hitchhiker: officially declared dead years ago, and yet to look at the world around us — the cords snaking from every pedestrian's pockets into their brains, the doomsday sermons on the death of the album, the candy-colored persistence of U2 — you'd swear it was all still here. There's no undoing the way Apple's pocket wonder changed the business of music and the act of listening the moment it was introduced in 2001; for better and for worse, that legacy is secure. But something did leave the earth when the last original iPod models, the ones with click wheels and spinning hard drives and zero internet connectivity, were manufactured in 2014: the idea that digital music belongs to anyone at all.

Consider the irony that the early '00s, arguably the peak of file sharing as a vehicle for music discovery, were also the golden era of the CD-R mixtape. At a moment when sharing music with strangers was suddenly a snap, sharing it with friends often remained a weekend-swallowing inconvenience — if only because, as a culture, we still agreed that sharing favorite music was an intimate act. As much as the promise of "1,000 songs in your pocket" may have hijacked attention spans and obscured the artistic labor that makes all that music possible, the embers of that intimacy still glowed in the iPod's early years.

If you doubt that, I invite you to recall the feeling of picking up a new acquaintance's iPod and scrolling through their collection — which, at least at my school, was a frequent and hallowed ritual. Think of the tingles of validation at seeing your obscure faves represented, the rush of curiosity at artists and albums unknown, the cheeky secret language of playlist titles and the grudging admission that this one college a cappella group's version of an All American Rejects song was actually pretty great. The streaming era giveth and taketh away, and its long-term effects are still too short-lived to measure. But if there is one vital experience that appears to have followed the iPod classic into the sunset, it is the feeling of exploring a personal music library: cloistered and unique, born of time and effort, whose contents tell stories about the owner's past and present. --Daoud Tyler-Ameen 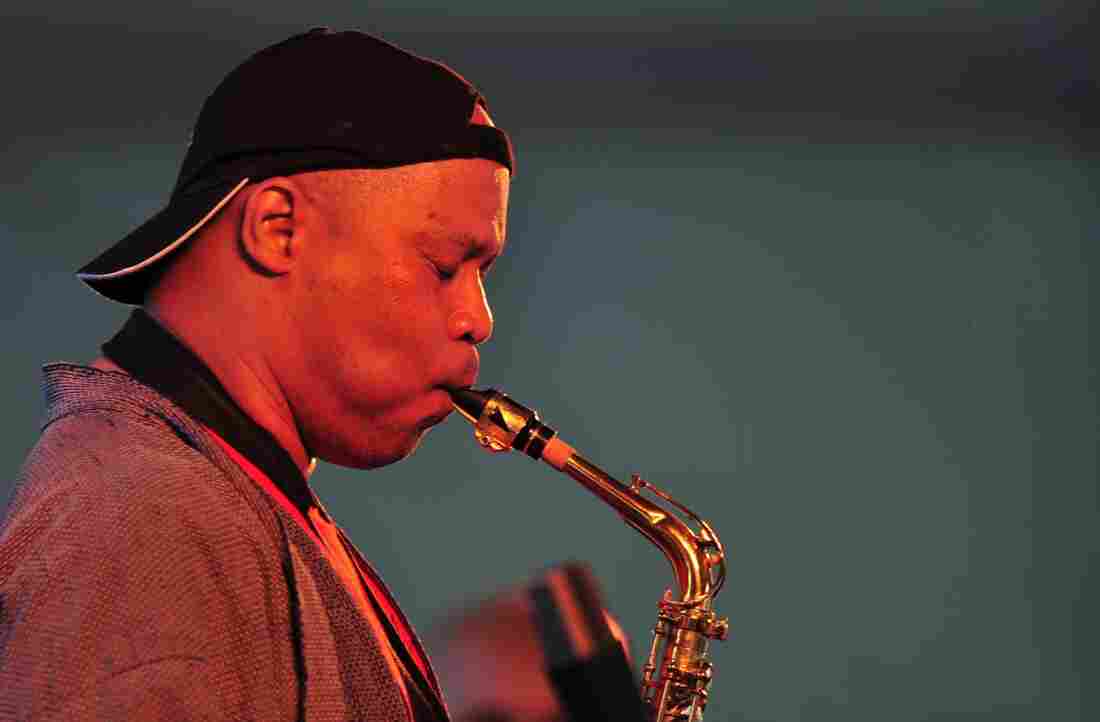 After the prestigious "genius grant" went to a series of artists who claimed him as a mentor — drummer Dafnis Prieto, saxophonist Miguel Zenón, pianists Jason Moran and Vijay Iyer — Coleman finally joined their ranks, solidifying his place as a titan of progressive jazz. (This year, the award went to another one of his protégés, Tyshawn Sorey.)

T-Pain comes to the Tiny Desk

Those who knew T-Pain knew he could sang, but he found joy and inspiration for years using Auto-Tune. At the Tiny Desk, he went without, and suddenly the singer-songwriter's lanes opened wide, including a full tour in 2017 inspired by the performance. 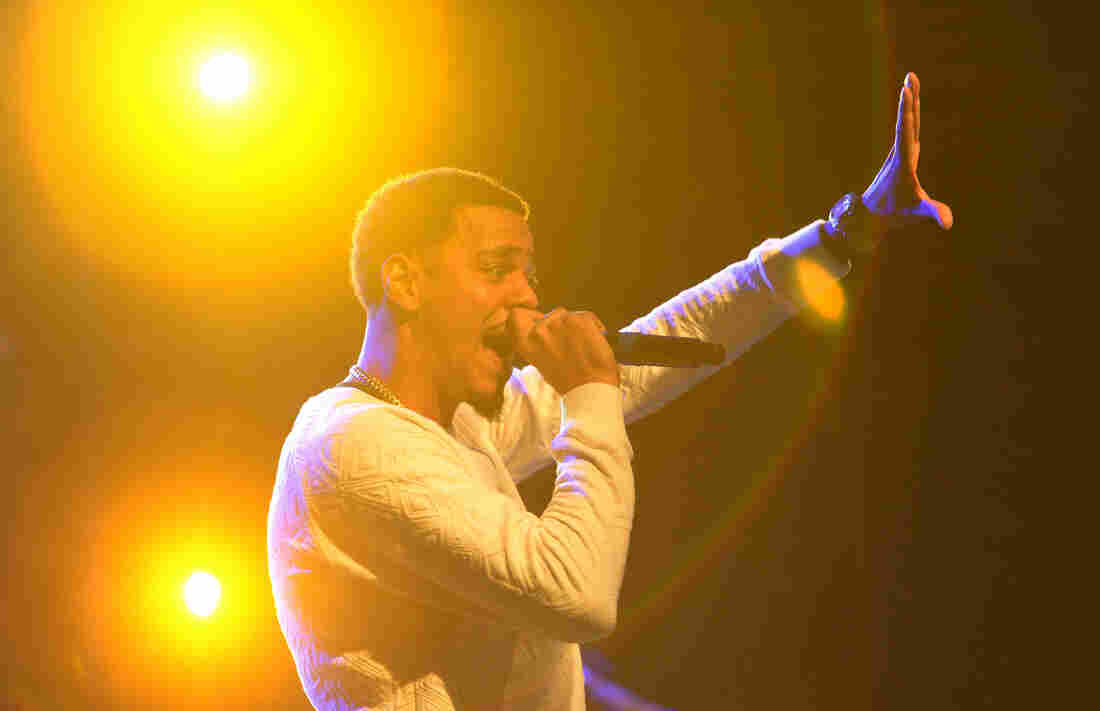 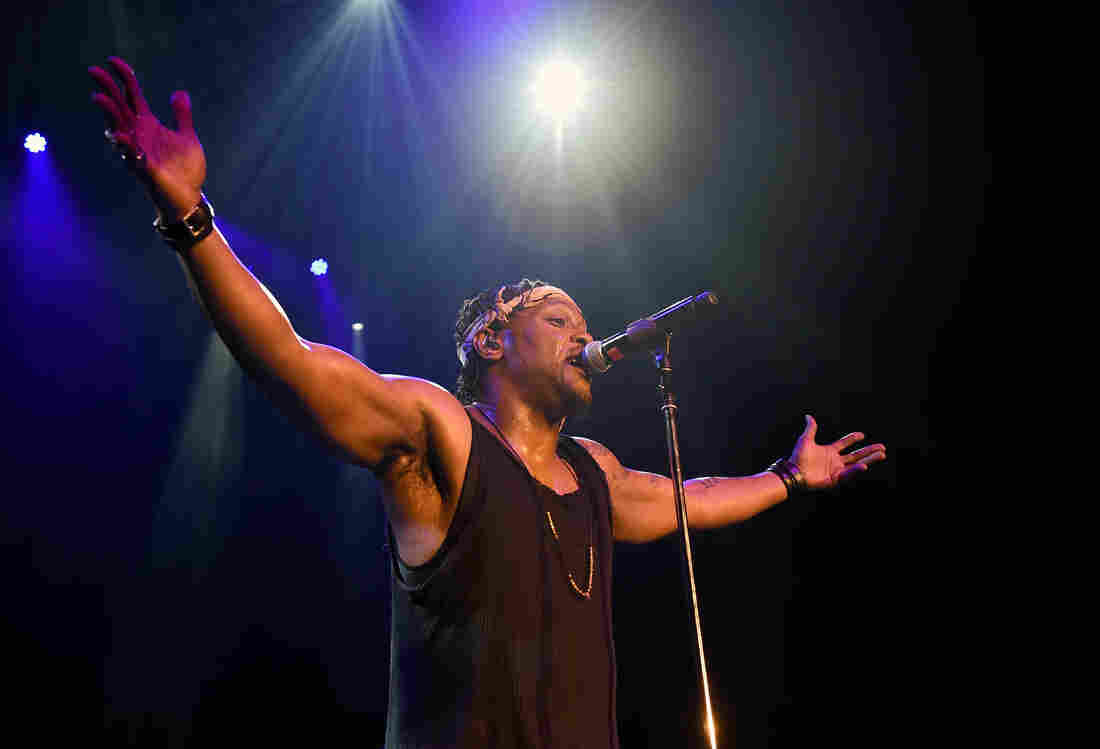 Recording artist D'Angelo performs at The Chelsea at The Cosmopolitan of Las Vegas on Aug. 21, 2015. Ethan Miller/Getty Images hide caption

Meticulously reworked over the 15 years that followed Voodoo, D'Angelo rushed out Black Messiah in the wake of several instances of police brutality against black men. But ultimately, D'Angelo's masterstroke proved that time was his sharpest instrument.