Accessibility links
Björk Invites You To Her 'Utopia' In a conversation with Rachel Martin, Iceland's musical auteur unpacks a new release that couldn't be more different from 2015's stark breakup album, Vulnicura. 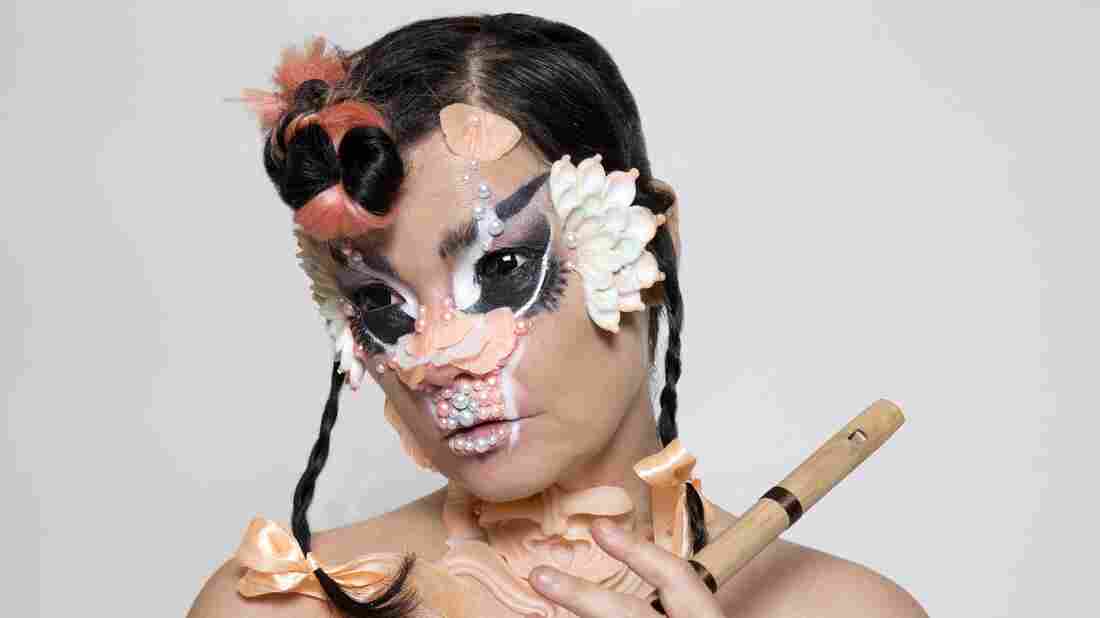 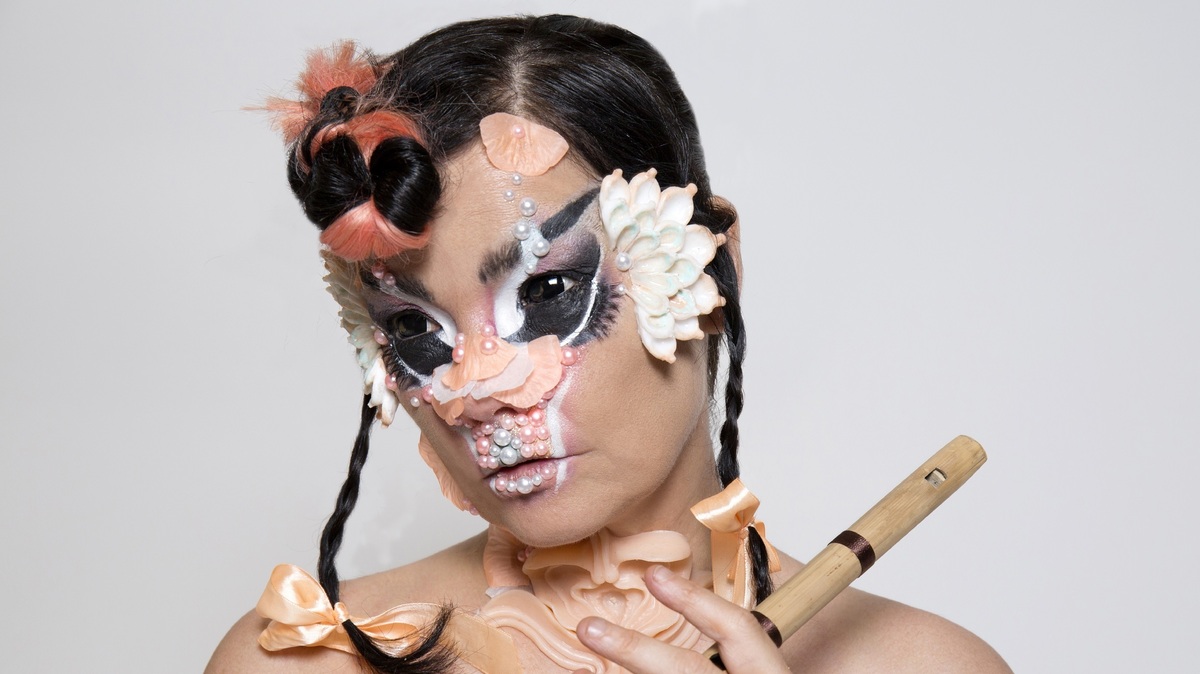 Santiago Felipe/Courtesy of the artist

Björk's last album, Vulnicura, felt heavy. A chronicle of her separation from longtime partner Matthew Barney, its sounds had a suffocating menace, like when your breath is sucked from your lungs as you race down the highest hill of a roller coaster.

A few years later, on the new album Utopia, it's as if Björk found enough peace amidst the chaos to take in a lungful of air, and breathed it back out into the world as music. Sometimes that breath is literal, passing through the instruments of the 12-woman flute orchestra she assembled. Other times it exists as imagined space, as when co-producer Arca manipulates waveforms to conjure the sound of birds from another world. Having long explored the organic relationship between nature and technology in her music, Björk is using it on this release to present her vision of a better future.

In a conversation with NPR's Rachel Martin, Bjork unpacks how Utopia explores ideas of paradise through sound, its relevance to the current conversation around sexual harasment and why singing while walking is some of the best vocal training you can get. Hear the radio version at the audio link above, and read on for an edited transcript.

Rachel Martin: It is an interesting intellectual exercise to think about what utopia sounds like. What is the aural landscape of perfection?

Björk: I always wanted it to be the both sides of utopia: the perfect fantasy, but also the reality of it. During the writing of the album, and mixing it, I was really curious about the contrast between people's dreams and how then they make them real; the suspension there, it just really turns me on. I think this album was also an attempt to define that: to have very sci-fi, fantasy, reverb-on-a-billion moments — and then one minute later it's the reality, the really dry vocals right next to you, speaking to you directly.

Vulnicura was hard to write, but easy to arrange and do the finishing mixing touches. Utopia was almost the opposite, where the writing was so fun and easy, and then the finalizing of everything was kinda tricky: Because the subject matter was utopia, I wanted to feel like you've come to this island and there are all these sounds and birds and plants that you've never seen or heard before.

We did a lot of research into flutes, into mythology. We looked at mythological stories from South America and Africa and Asia and Scandinavia and from all over that had flutes in them. And they all seemed to have that same kind of story, where all the women escape with the flutes and the children, and they go to someplace where there's no violence and no aggression and form a new society that's utopian — but three-quarters into the story the males return, and how do they deal with that.

The men ruin the utopia?

No, in the end they have to kind of negotiate: The stories always end on some sort of turn, where the sexes have found a new way to communicate. But I think the beginning of this album and the utopian idea is very much about escaping aggression — almost like a radical protest to kind of say, "Okay, I'm going to go with my children and my flutes over to that corner over there, and that's where I'm going to define my utopia. And once I've defined it, we can talk, you know?"

It's really curious to be doing that while Trump got elected, and we have all these dramatic issues in the world, like "#MeToo," for example. I think we are really in a place where we need to redefine the roles we are going to play, not just for women, but for the men. I think they're also exhausted by their own roles.

Your previous album, Vulnicura, was about the end of a long relationship that you had been in, and you've said it was a very painful thing to create. This new album is a continuation of your own journey, but this is a new chapter. This is you moving on, for lack of a better cliché.

I think the severity of the last album made me very excited about everything that was light and fluffy and in the wind, so that became definitely one of the major sonic inspirations for this album: I started to write flute arrangements, and I got together like 12 girls in Iceland to play the flutes.

The melodies on Vulnicura were very, like, horizontal: lying on the ground, very heavy. The string arrangements I did were very severe. And then, obviously, doing the concerts in Carnegie Hall, the whole room was just sobbing and crying. So it's just something that's been forced to be at the bottom of the ocean for long enough: Eventually it's going to float up to the surface, and writing this album felt like that. I was tired of the over-importance of the narration of the last album, where the narrator was full of self-pity and self-indulgent. I wanted to just be free and become a musician again, and have my voice, instead of it lying on the ground, my melodies to be more like constellations in the cloud.

The flute is an instrument that you have worked with for a really long time. This was your first instrument growing up — am I right on that?

I started playing the flute when I was, like, 5. It was just a wooden recorder for a few years; I moved to the sort of classical, silver-colored flute probably around 9 years old, and played that until I was about 14 or 15. I had this complicated relationship with flutes: I wanted to learn the oboe and my mom couldn't afford it, so in my strange head I somehow always thought about it as a second choice. What I didn't realize until later was when I started singing in punk bands, my voice was very immature — but after playing flutes for 10 years I had, I have to say for myself, killer lungs. So the flutes really helped me as a vocalist, and it was actually kind of beautiful that it was in a sort of indirect way.

Do you think about breath as its own tool in composition? So many people learn the piano first, or maybe the violin. When a flute, an instrument that is so dependent on your breath, is your first instrument, I wonder if it influences how you compose music.

Definitely. I started writing melodies really young. I would always walk a lot outside; I lived in the suburbs of Reykjavík, and for a long time it was a 40-minute walk to my school and back, and that generation, we would walk in any weather. I would sing a lot and that would be my friend, like how I would cope with all the different weathers and the darkness and also the euphoria in the spring. I think when you walk and sing at the same time, without knowing it, you're probably regulating your breath. And that's my most preferred way of singing, still, is walking.

What is your go-to song when you're just walking around the city? Is there a song that always comes to you?

Well, I usually try to walk somewhere where nobody can hear me: If a person comes walking towards me I'll stop until the person is gone. That's why I like living by oceans, or in the outskirts of cities where I have the mountains or forests, so I can walk there.

But I think most of the time when I'm singing, I just make things up. It's more like a vocal yoga, where I'm warming up my voice: Maybe the first half-hour I won't even sing, and then I'll start two little notes, and then, you know ... You can hear that in a lot of my songs. You have the verse where you're kind of off in the lyrics, doubtful, and then you have the choruses where your voice is warmed up and your doubt has left you.

I have to say, there's something funny about Björk walking around singing to herself, and then being so embarrassed that you then stop when someone walks up. I mean, you are Björk. You're pretty good at singing.

I know! But I'm not Björk to myself. Nobody is an icon to themselves.

I want to ask you about something you mentioned earlier, this idea of women needing to escape. We are definitely living in a moment where there are far more public conversations about what it's like to be a woman walking through the world, what it's like to live through sexual harassment or sexual assault. You made a widely seen post on Facebook recently, calling out someone in you'd worked with in the film industry for sexual harassment. I wonder how you are observing this moment as it has unfolded?

So when I was 33, I went to Denmark and acted for the first time in my life in a film. Not only was I walking into the country that used to oppress Iceland for [hundreds of] years, which is kind of ironic, but also as a musician and a woman who had never really experienced any harassment. ... Like I said in my comment on Facebook, I've been really blessed: I was raised in a country which has probably the closest [thing] to equality between the sexes in the world — it's not equal, but it is one of the closest ones. And I also came from the punk background, where there was great importance in owning your work, releasing your own music and not belonging to any company.

And therefore, when I walked onto the film set, the contrast was very obvious. I stood up after two months in defense of my music, because they were editing it without my permission. But I didn't talk about the harassment side of things until now, because like every woman, like all the women now that are coming out, they knew if they stood up they would just be ridiculed or made into the problem-maker, like it was no room for it in the public sphere. That was just something that women had to take on and deal with, part of the luggage of being a woman. What's so beautiful about this moment, now, is it's changing. It's wonderful for me to have a young daughter and feel confident that she's not going to have to take this on. It really feels like there's a big change in the air. And that's why I stood up and shared my story.

Do you think utopia is possible? I mean, did you pick that title because you are inherently an optimist? Or is it a more cynical interpretation, casting it as a sort of naive expectation?

I think it's all of the above. I like the complexity that the title Utopia brings. It's also ... I have six younger siblings; I was the oldest one. And then I was a single mom, very early. I've always had a lot of kids around me, and when you are bringing up children you have to have a spiritual plan with optimism: There has to be a way out, or a way to grow. I think with any situation, especially the tough ones, you have to have the imagination to think of the utopia. You have to think of an alternative to the situation that you're in. And sometimes it takes a lot of effort, but you have to believe in your right to do that.