Donald W. Cook is a Los Angeles attorney with decades of experience bringing lawsuits over police dog bites — and mostly losing. He blames what he calls "The Rin Tin Tin Effect" — juries think of police dogs as noble, and have trouble visualizing how violent they can be during an arrest.

"[Police] use terms like 'apprehend' and 'restrain,' to try to portray it as a very antiseptic event," Cook says. "But you look at the video and the dog is chewing away on his leg and mutilating him."

Cook says the proliferation of smart phones and body cameras is capturing a reality that used to be lost on juries. "If it's a good video," he says, "it makes a case much easier to prevail on."

The new generation of videos is capturing scenes of K9 arrests that are bloodier and more violent than imagined by the public. An NPR examination of police videos shows some officers using biting dogs against people who show minimal threat to officers, and a degree of violence that would be unacceptable if inflicted directly by the officers. 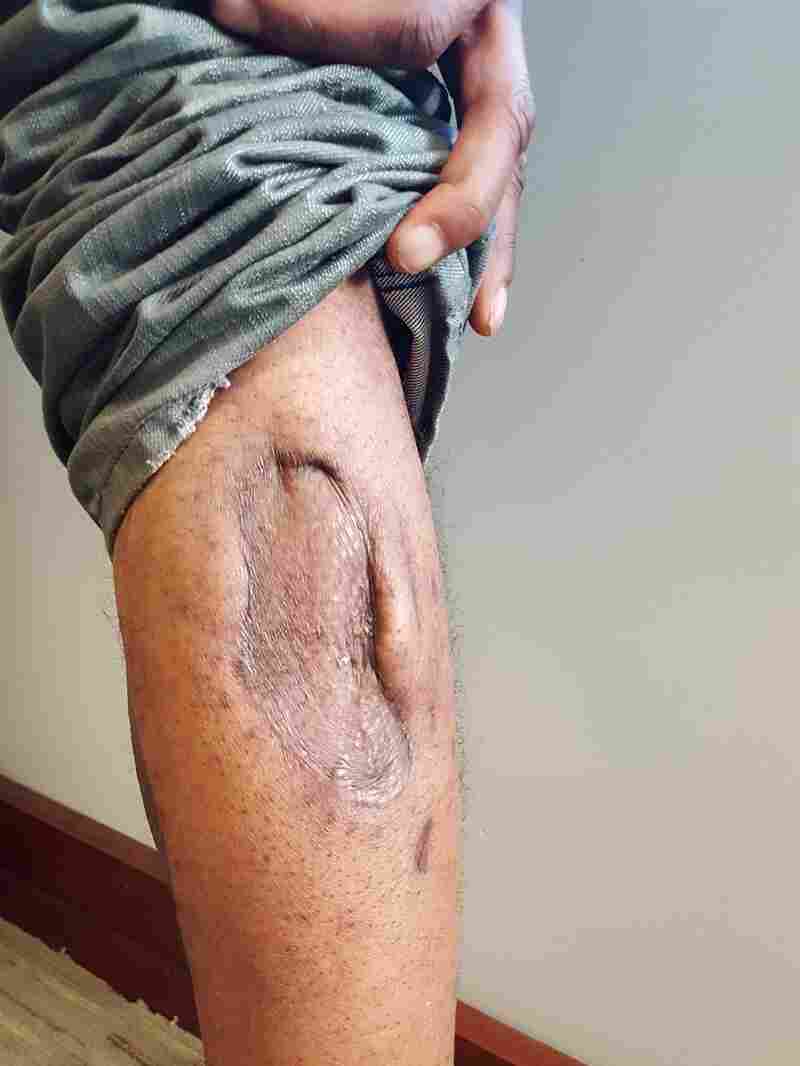 Frank Baker shows the scars left by a St Paul, Minn. police dog. Baker was mistakenly identified as a criminal suspect, and police used a dog to subdue him as he exited his vehicle in his apartment's parking lot. He later got an apology and a settlement. Andrew J. Noel/attorney hide caption 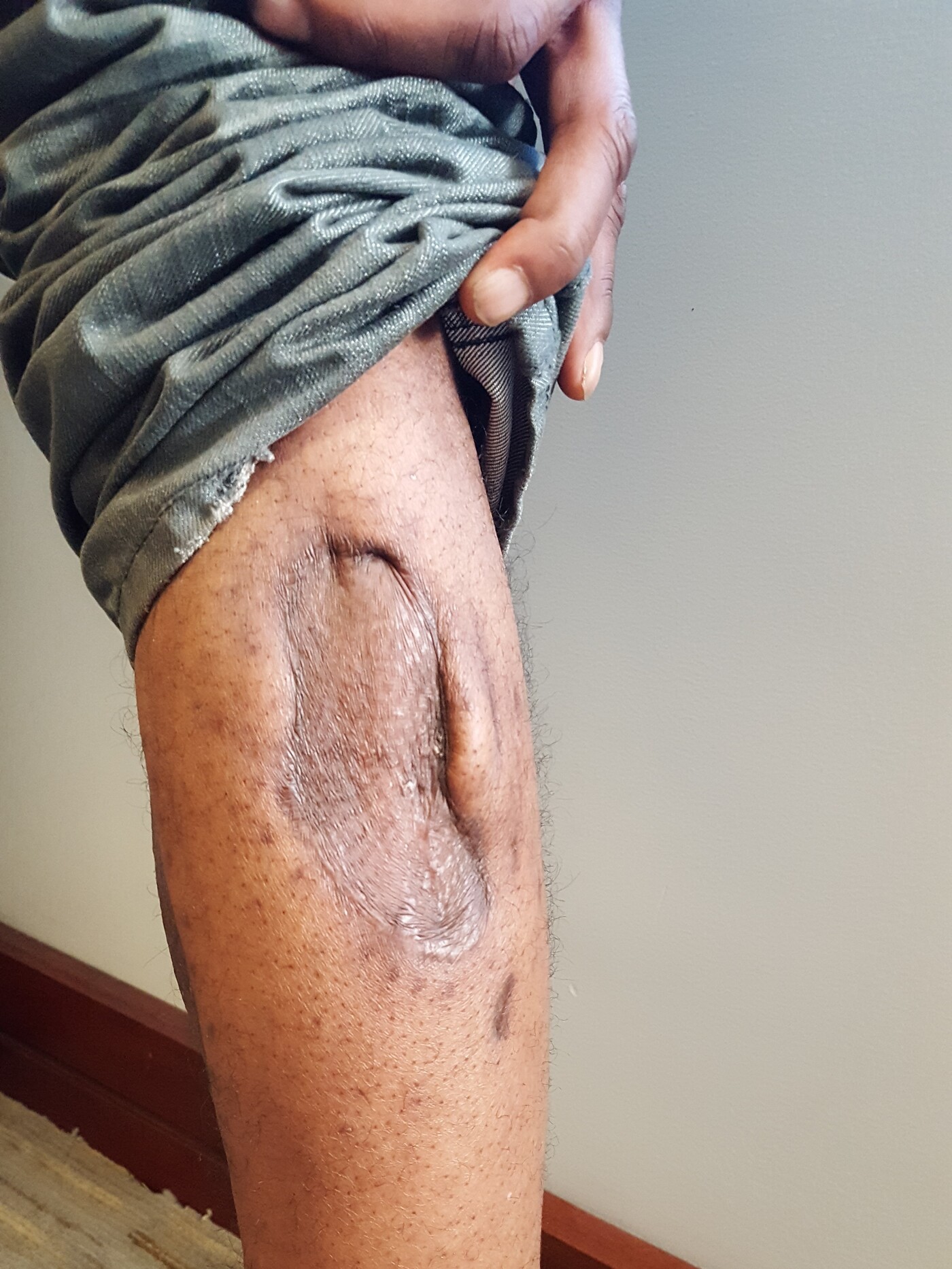 Frank Baker shows the scars left by a St Paul, Minn. police dog. Baker was mistakenly identified as a criminal suspect, and police used a dog to subdue him as he exited his vehicle in his apartment's parking lot. He later got an apology and a settlement.

The latest high-definition body cameras worn by police provide especially clear views. Cook collects these videos on his computer, and what strikes him is the degree of bloody violence the dogs can inflict.

Police dog-handlers reject this characterization. They say dogs are a valuable method for subduing dangerous suspects while protecting officers from harm. They point out that a dog can be called back after it's been unleashed — unlike the deployment of a Taser or the firing of a gun.

And there are use-of-force rules. Most departments require police to shout out clear warnings before a dog is released.

Spokane Police K9 Officer Dan Lesser, an experienced dog handler and trainer, says he weighs several factors before releasing his dog. "What is the risk of allowing this guy to escape armed with a gun? What kind of damage, what kind of mayhem is he going to cause if we allow him to escape, and go car-jack a car, and go kill somebody else?"

"It happened so fast"

But the threshold for releasing dogs appears to be lower in many of the recent videos. Sometimes, police send the dog in response to threats that seem more hypothetical than real.

In one case captured on body cameras in 2015, San Diego police officers used a dog on a naked man who was high on LSD and wandering around a neighborhood in broad daylight. He refused a command to turn around, and within seconds they released the dog. The biting lasted 52 seconds. It caused lasting injuries — as well as an eventual settlement from the city.

"[Police] use terms like 'apprehend' and 'restrain,' ... But you look at the video and the dog is chewing away on his leg and mutilating him."

In the incident report, officers cited the threat posed by the man's balled fists, and the presence of stones on the ground, which he might have picked up to use as weapons.

The quickness of police to release K9s was also a factor on June 24, 2016, in St. Paul, Minn. On that night, cops responding to a report of an armed black man happened across Frank Baker, sitting in his car near his apartment building. Baker, who's African-American, seemed to fit the general description, though he was unarmed. They ordered him out, and he says he complied.

"I put my hands up and I took about seven or eight steps, and as soon as I turned around, the police let the dog out on me," Baker recalls. "It happened so fast ... not even ten seconds and I'm on the ground."

A police dash camera captured the scene. As Baker writhes and screams, police kick him and shout, "Don't move!"

One of the arguments for K9s is that they're a "pain compliance" tool: the bite is supposed to convince a suspect to hold still.

Baker finds that theory astonishing. He says as the dog tore into his leg, following police commands was the last thing on his mind.

"I didn't hear what they were saying," he says. "My mind just went blank." 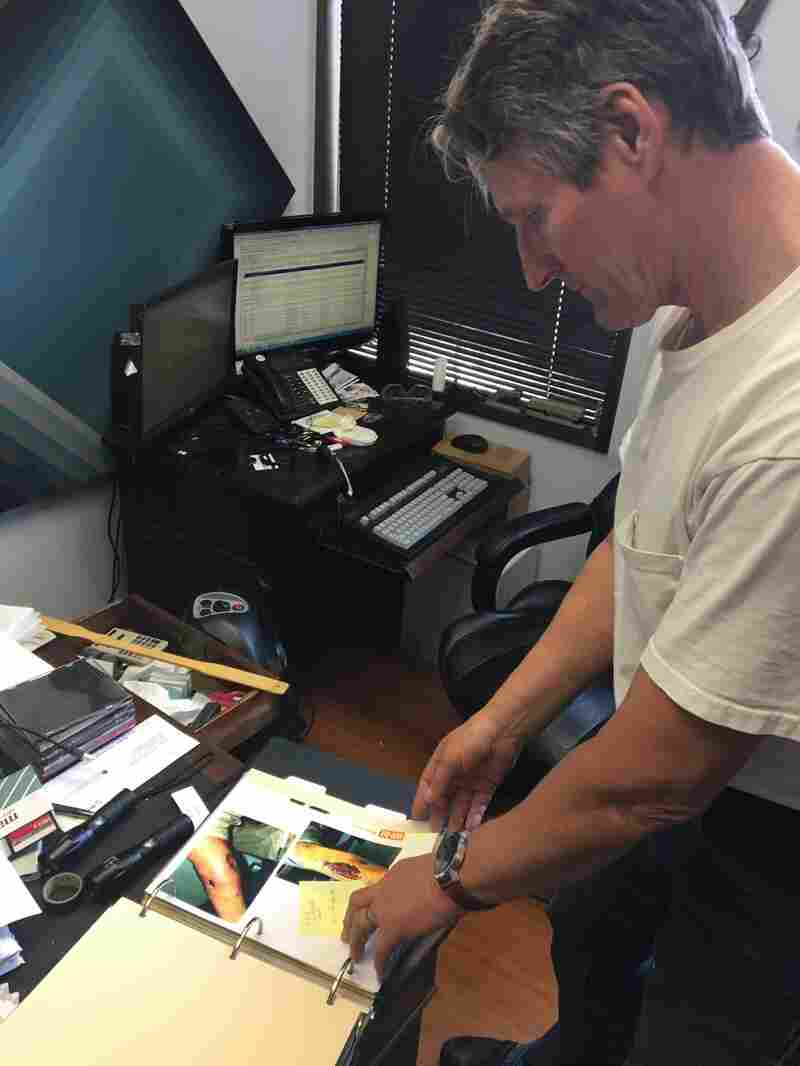 Donald W. Cook, a Los Angeles lawyer who claims to have litigated more dog bite cases than anyone, reviews photos of past clients' injuries in a binder he calls "The Bite Book." He says the photos aren't nearly as persuasive to juries as the new wave of K9 arrest videos. Martin Kaste/NPR hide caption 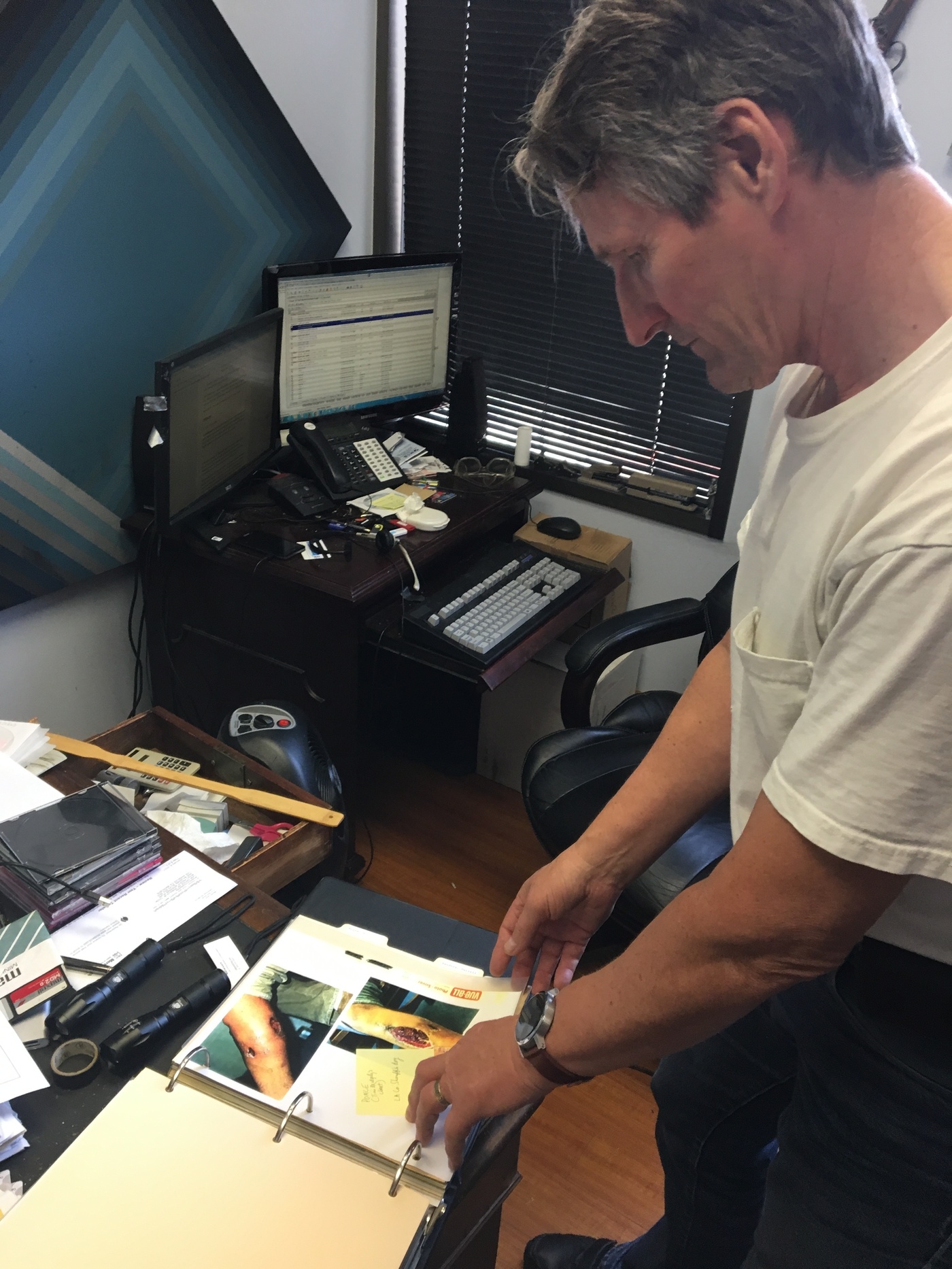 Donald W. Cook, a Los Angeles lawyer who claims to have litigated more dog bite cases than anyone, reviews photos of past clients' injuries in a binder he calls "The Bite Book." He says the photos aren't nearly as persuasive to juries as the new wave of K9 arrest videos.

In fact, in many videos, the release of a dog appears to escalate the violence of an arrest.

"You just look at the dog as the source of pain and you do everything you can to address that pain," says Seth Stoughton. He's a former police officer, now an Assistant Professor of Law at the University of South Carolina who studies police use of force. "Those shouted commands — you'll deal with that later, when the pain stops."

And yet suspects who kick and try to shake the dog off are often accused of resisting arrest.

K9 handlers say dog bites tend to be quick — 10 to 15 seconds is a figure that gets cited frequently.

In many of these videos, though, the biting lasts much longer. In a recent incident captured on a smart phone, you can hear the outrage of bystanders at how long it's taking San Diego police to get their dog to stop biting a suspect's arm.

Privately, handlers often talk about having trouble getting a dog to "out," or open its jaws. It's a concern that comes up on discussion boards, and in this K9 training video.

Occasionally, an attacking dog simply stops responding to commands. That happened this past April in Georgia, when a K9 attacked its handler, Houston County Sheriff's Department Sgt. Slate Simon. The dog bit down to the leg bone and would not release, forcing the officer to shoot and kill the dog.

"He was just doing his job," Simon told the Atlanta Journal-Constitution. Simon attributed the incident to "mistaken identity."

It's possible there was a deeper problem. Simon's K9 was a Belgian Malinois, which in recent years has become the most popular breed for police and military work. It looks something like a small German Shepherd, but is more nimble and less prone to certain health problems.

But some Belgian Malinois may come with a dangerous genetic flaw.

Researchers at the University of California Davis have identified a gene in some dogs of that breed that's "associated with owner reports of seizure, 'glazing over' behaviors, episodic biting behaviors, and general loss of clarity."

UC Davis sells a $50 test for the gene, something breeders and trainers could use to screen out potentially problematic dogs before they become police K9s.

But the genetic test has few takers. In fact, all the trainers, handlers and K9 associations contacted by NPR said they were unaware of a "glazing over" gene, and most dismissed the potential problem.

If there is a pattern of such behavior, it would be exceedingly difficult to detect. National statistics are bad to non-existent, especially when it comes to frequency and severity of K9 bites. The Centers for Disease Control and Prevention estimates the number of dog bite injuries involving "legal intervention" to 4,105 in 2015. That's up from 2,311 in 2001. But that's just an estimate, based on surveys of emergency rooms. 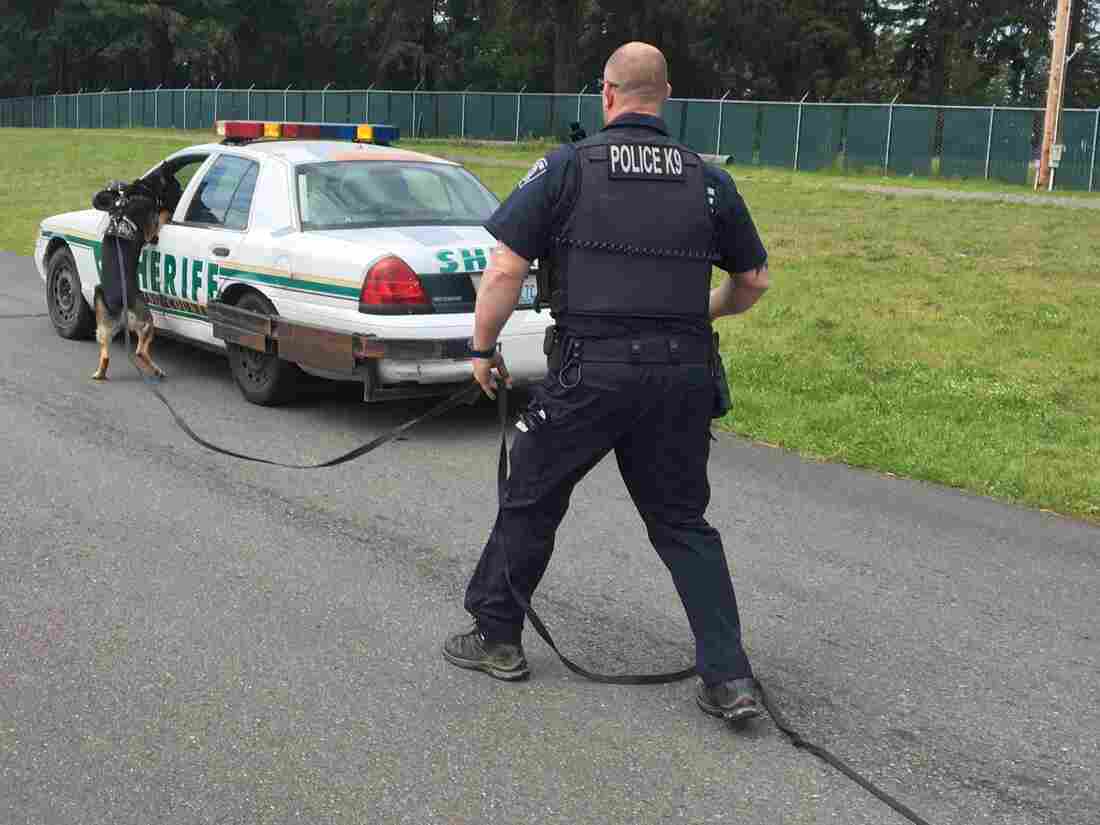 Dogs training to jump into a car, then bite and hold the occupant. Inside, a law enforcement officer wearing a protective suit screams in fake agony, to encourage the dog to bite harder. Martin Kaste/NPR hide caption 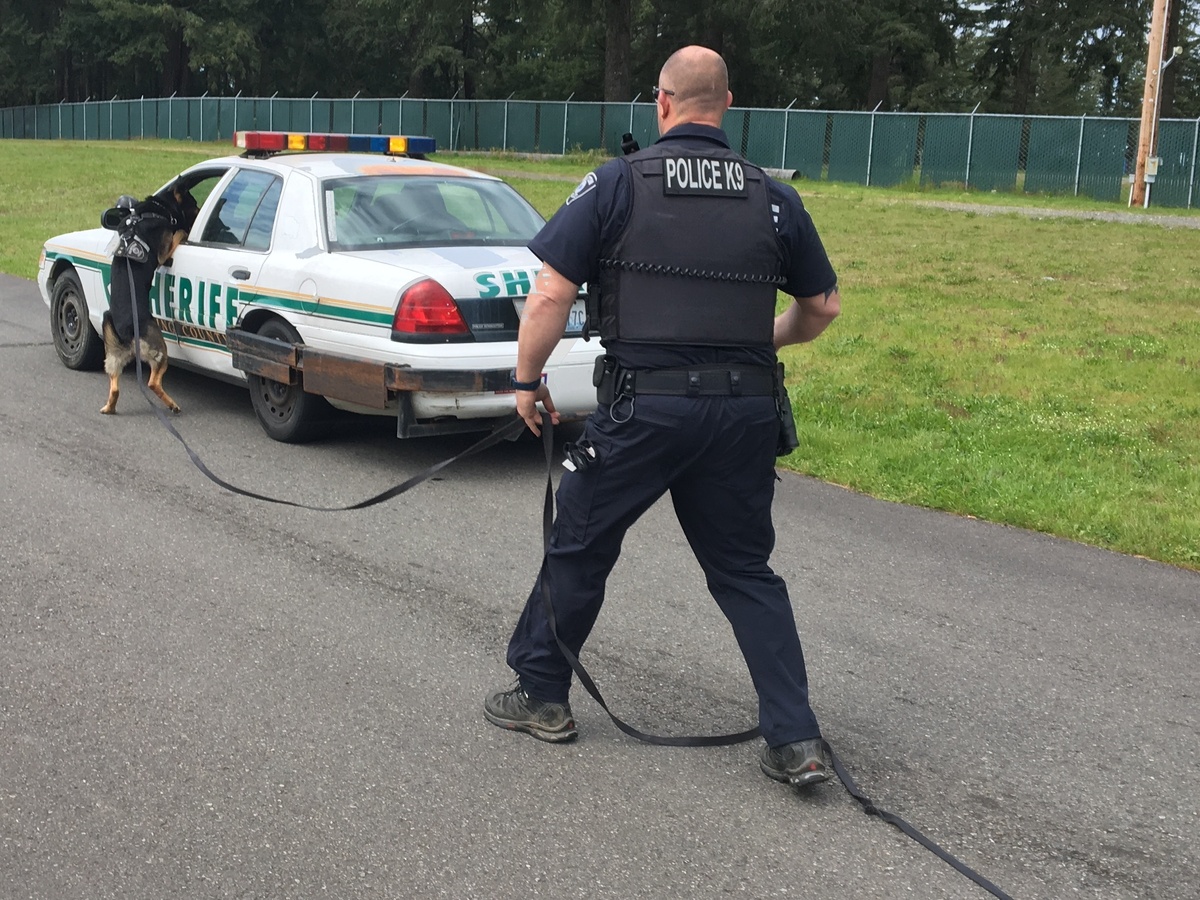 Dogs training to jump into a car, then bite and hold the occupant. Inside, a law enforcement officer wearing a protective suit screams in fake agony, to encourage the dog to bite harder.

There isn't even an accurate count of the total number dogs working in law enforcement. The world of police K9s is decentralized, with competing regional and national associations, and it can be defensive.

"It's a tight-knit community," says Charles Mesloh. He's a former police K9 handler who now teaches Criminal Justice at Northern Michigan University. He's done research on K9s and use of force, but he says it's almost impossible. "When an outsider is trying to collect actual data, they become immediately suspicious."

Mesloh wishes there were better data, because he believes in the effectiveness of K9s. He says the mere threat of releasing a dog can avert violence.

"You get a lot more suspects surrendering without any incident at all," Mesloh says. "The same suspect that rips off his shirt and asks for more cops to come to the scene so they can have a battle royale, immediately will surrender when the police dog gets there. I've personally seen that five or six times."

But that effectiveness can be overshadowed by gory videos of what happens when the dogs are released — especially those in which police give suspects little chance to surrender, or the biting lasts longer than necessary.

Many K9 handlers are scrupulous about issuing warnings; Jim Gibson is a sheriff's deputy with lengthy K9 experience, both as a handler and a trainer. He believes in making repeated, clear warnings, and he takes releasing a dog as seriously as firing a weapon.

"You get down, look right between his ears like you would a gun sight," he says, to make sure the dog is looking at the right person. Because that's the person it will bite.

It's a level of restraint that's missing from some of the more shocking videos of K9 apprehensions. In the absence of good national statistics, those videos may end up determining the public perception of police K9s. It's a worrying thought for many handlers.

"I'd like to think that as long as people are reasonable, like anything, that we would still have this tool to use," Gibson says.