Accessibility links
'Coco' Makes Moviegoers Proud To Be Mexican Pixar's newest movie is meant to be a love letter to Mexico. Coco has an all-Latino cast, it's packed with references to Mexican culture, and it went right to No. 1 at the Mexican box office. 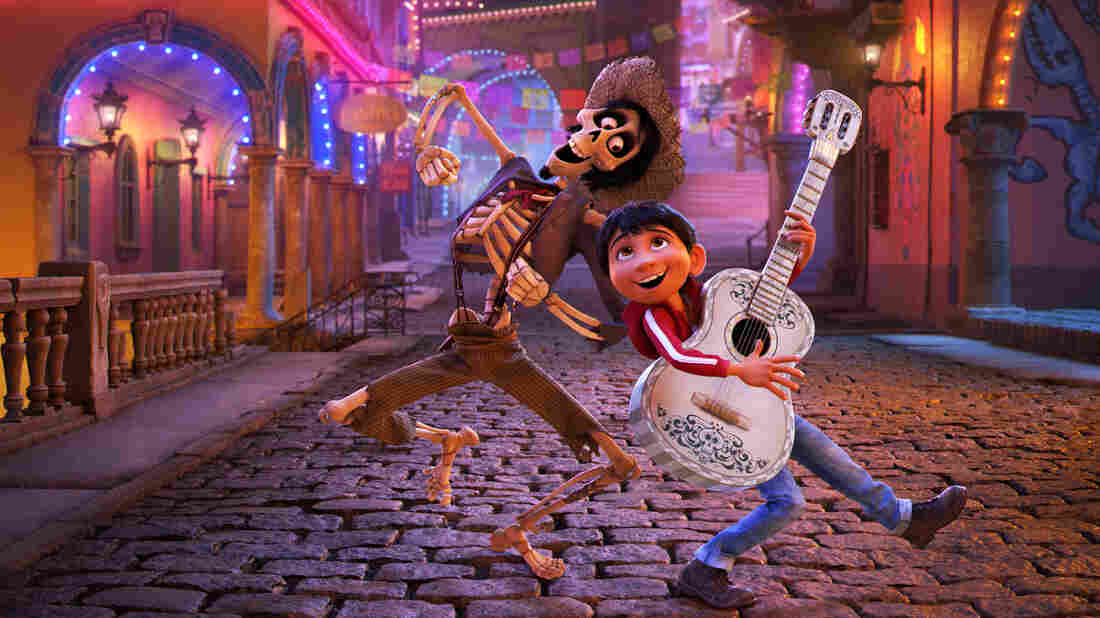 In Coco, young Miguel's love of music ultimately leads him to the Land of the Dead where he teams up with charming trickster Hector. Pixar hide caption 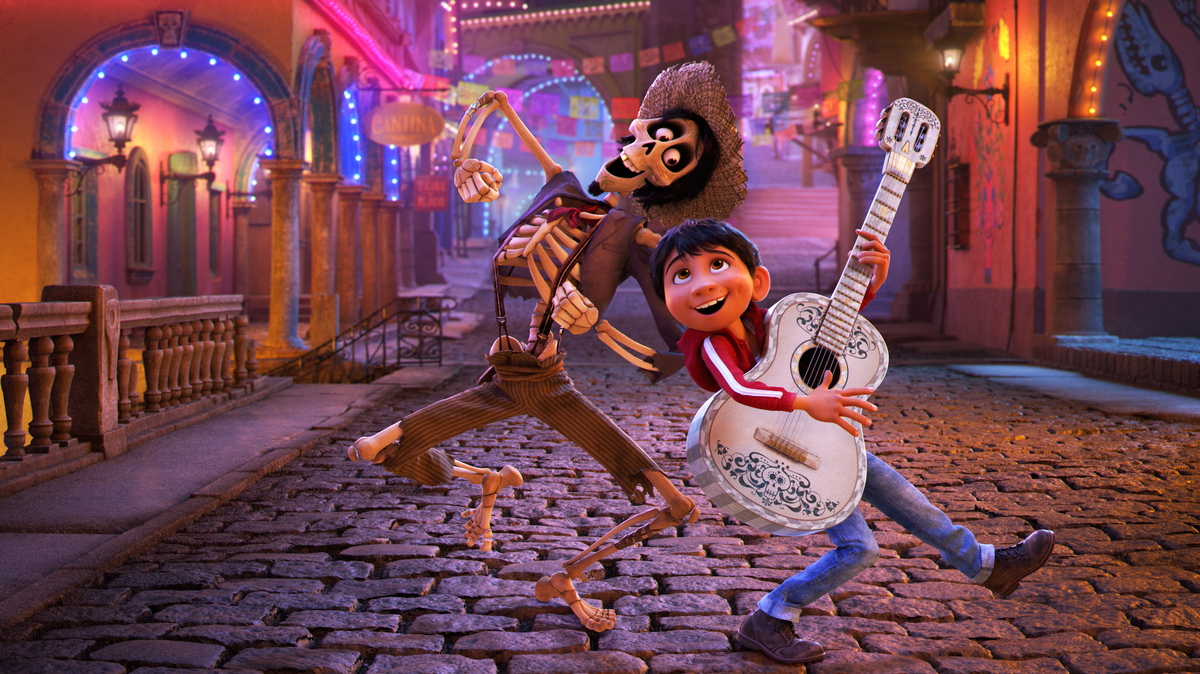 In Coco, young Miguel's love of music ultimately leads him to the Land of the Dead where he teams up with charming trickster Hector.

Pixar's newest animated movie, Coco, is meant to be a love letter to Mexico. The movie has a Latino cast. It's full of Mexican music, culture and folklore — including some of the traditions around the Day of the Dead. And it premiered in Mexico, where it's gone on to become the No. 1 film of all time. Now, audiences in the U.S. can see it.

The story follows 12-year-old Miguel Rivera, who yearns to be a great musician. But he has to hide his ambition — and his guitar — from his family of shoemakers who don't approve. "No music," he's continually reminded by relatives who believe music cursed the family. His abuelita even raises her chancla, her sandal, at him when he dares to dream. "But my great-grandma Coco's father was the greatest musician of all time," Miguel declares.

Miguel idolizes Ernesto De La Cruz, a famous singer and actor from Mexico's golden age of cinema. The suave, fictional matinee idol was created as an homage to crooner Pedro Infante. "Remember me, though I have to say goodbye," he sings. "Remember me, don't let it make you cry." (This catchy anthem was written by Robert Lopez and Kristen Anderson-Lopez, the duo that penned Oscar-winning songs from the movie Frozen.)

Not My Job: We Quiz 'Coco' Director Lee Unkrich About Taco Bell

And remembering family is a recurring theme of Coco -- in fact, it's the reason Miguel goes on his big adventure. On Dia de los Muertos, the Day of the Dead, he visits de la Cruz's altar at the town cemetery, and soon after finds himself in the colorful afterlife. There, he's greeted by a group of skeletons decked out in fancy clothes and hats, looking like characters from folk artist Jose Guadalupe Posada, whose calaveras — skeletons — are commemorated on that day. "Welcome to the land of your ancestors," they say to Miguel. "We're your family."

Miguel teams up with one mischievous skeleton named Hector, who lets him in on the most important rule of the land of the dead: When there's no one left living who remembers you, you disappear from this world. So Miguel, along with his hairless dog Dante, must race through the land of the dead to get back to his family's altar.

This is not the first animated musical Day of the Dead movie; Jorge Gutierrez's The Book of Life came out in 2014. As in that film, Coco is filled with Mexican cultural references and folklore, from its opening titles crafted as papel picado, to cartoon caricatures of artist Frida Kahlo and Mexican wrestler Santo. A bridge of marigold petals leads to the land of the dead, a floating metropolis layered atop ancient Mesoamerican pyramids, and colorful alebrijes -- mythical spirit creatures — fly all around.

"We hope that our audience and those communities feel like we got it right," says co-director Lee Unkrich. He says the filmmakers went to great lengths to make sure the depictions were culturally authentic and respectful. He and his crew of artists at Pixar spent six years travelling to Mexico for inspiration, going into people's homes, visiting plazas and mercados, and attending Day of the Dead festivities. But as they were kicking around ideas for a title, parent company Disney got in a lot of heat for filing to trademark the phrase "Dia de los Muertos."

"There was a mistake in registering that title," says Unkrich. "It was something that happened that we regret deeply, because it was completely antithetical to what we were trying to do. We were trying to do everything right, and reach out to the community. But it also ended up being a bit of a wake-up call for us to step up our efforts even more."

Pixar was already bending over backwards to make sure it was culturally true, and they did a good job. And they were smart to listen to the screaming cholo.

Pixar ended up hiring a small group of cultural consultants, including Lalo Alcaraz. The well-known Chicano cartoonist publicly poked fun at Disney's misstep, and even led a small online protest. Alcaraz says he and the other consultants accomplished their mission: Keep Coco from being whitewashed. "We'd go to screenings, we'd talk about the dialogue, give suggestions," says Alcaraz. "Pixar was already bending over backwards to make sure it was culturally true, and they did a good job. And they were smart to listen to the screaming cholo."

Gonzalez grew up singing with his sisters and brother at the plaza on Calle Olvera, a Mexican marketplace commemorating the part of Los Angeles. In Coco, he belts out mariachis and son jarocho tunes; the soundtrack includes other genres, including banda, ranchera, huapango and modern Mexican electronic music.

DJ and producer Camilo Lara, from the group Mexican Institute of Sound, has a cartoon cameo on the turntables at a party in the movie. He was Coco's music consultant, helping gather musicians for what he calls "magical" scoring sessions in Mexico City. "They are like the crème de la crème from Mexico," he says.

This is showing the Mexico I like. The Mexico that is creative, and fun, and exciting, and full of culture and color.

Lara worked with composer Germaine Franco to create an eclectic sonic soundscape. She says she was able to infuse the folkloric music she grew up with full orchestrations in the style of Mexican films from the 1930s and 40s, and she praises the filmmakers for portraying so many different styles. "It's never been quite portrayed in such a beautiful landscape, as far as the sounds go," she says. "I mean, going to Mexico and recording all of the musicians, and then also taking the care to animate the musicians' every movement. It's pretty exquisite."

Franco wrote some of the lyrics, along with Coco's co-director Adrian Molina, a Mexican American artist who also helped write the movie. Molina says he hopes the story inspires audiences to look up their own family lore, "to call up the oldest person in their family, and have them tell stories of the oldest person they remember from their family."

Coco had a splashy opening in Mexico City's historic Palacio de Bellas Artes last month, complete with the national symphony orchestra and singer Carlos Rivera singing "Recuerdame" ("Remember Me"). "Bring a handkerchief, because you will cry," advises 63-year-old Rosalia Architrade, after watching the film at a theater in Mexico City. She says it made her proud of being Mexican, and she thanks the filmmakers for believing in her heritage.

In that sense, some reviewers have called Coco rebellious, even subversive, for celebrating Mexican culture in the current political climate. At a time when President Trump is trying to build his wall between the countries, musician Camilo Lara says, the movie sends an alternative vision. "This is showing the Mexico I like," he says. "The Mexico that is creative, and fun, and exciting, and full of culture and color, and not the Mexico full of violence and the narco-Mexico."

At the Hollywood premiere, García Bernal said he wanted to dedicate Coco to Latino children enduring the false narrative that their families that are rapists, murders or drug traffickers. "A four-year-old kid, a five-year-old kid that is growing right now in the United States is growing up in a state of fear," said Garcia Bernal. "And this film will help for this kid to feel, you know, empower them. And make them feel like they have a much more complex culture."

With all of its music and folklore and artwork, and the story itself, audiences so far feel Coco respects their families, living and remembered.

This story was edited and produced for radio by Nina Gregory and Danny Hajek, and adapted for the web by Petra Mayer.