Accessibility links
An Unexpected Friendship Brought The Sun Out Again For A Grieving Man After his wife died, Dan Peterson didn't know what to do with himself. Then, he found a new friend in an unlikely place: the grocery store.

After his wife died, Dan Peterson didn't know what to do with himself. He spent a lot of time in his garden remembering his wife's favorite flower, white roses.

"I've never been able to get a white rose to grow — all mine are red," Peterson says.

Before she died, Dan and his wife would do everything together. Now, the world just felt darker. 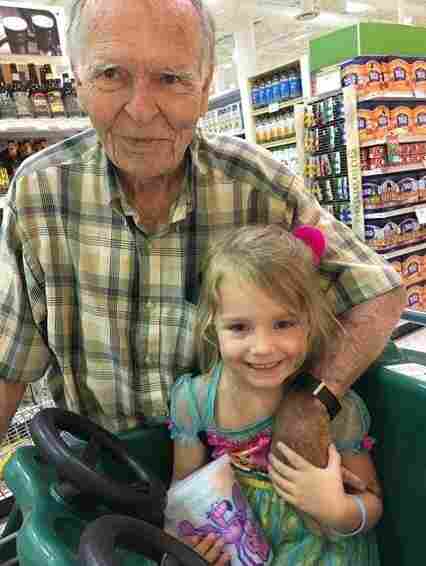 Dan Peterson and Norah Wood met at a grocery store one day. Dan was depressed after losing his wife and Norah thought he needed a friend. Courtesy of Tara Wood hide caption

"I'm sitting here starring out the back window of my house, just waiting it out to see how long I was going to live," he says.

"I hadn't shaved for a couple days and I hadn't had a haircut probably for three months and didn't give a you-know-what about anything except 'Well, what do I do tomorrow? Watch squirrels?' " he says.

Tara Wood was at the grocery store that day with her four-year-old daughter. Tara says Dan "didn't look like the friendliest man" — but that didn't stop Norah.

"And all of the sudden I come to the end of the hall, er aisle, and here's this little girl, and she's sort of bouncing up and down and pointing at me," Dan says. "And she said, 'Hi old person. Today's my birfday.' "

"I thought he needed a friend because he was sad," Norah says. 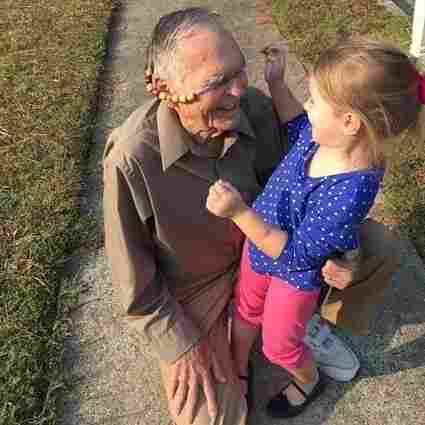 "When you have a little girl bouncing up and down and being so happy to be alive, you sort of change," Dan says.

Tara says Dan responded to Norah with, "Well hi little lady, how old are you today?"

Little Norah told her mom she wanted a picture, so the 81-year-old and 4-year-old posed for a photo. Norah then asked him for a hug.

"I don't know — it was magical and profound, and it's this cosmic sweetness that happened, you know, right in front of the dairy section of the grocery store," Tara says.

Tara posted the photo on Facebook and a woman wrote in the comments that she knew Dan, and that it was the first time she'd seen him smile since his wife died. So Tara called and planned a visit.

"Norah just ran right up to him like she's known him all of her life and she was climbing all over him like a monkey," Tara says.

"And of course every time I turned around, she'd come back over and hug me again," Dan says.

"I just promised I loved him," Norah says.

When it was time to leave, Norah and her mom passed the rose bush by Dan's door, "and it just blossomed a great big red rose," Dan says.

Norah leaned over to smell it.

With his pocket knife, he slowly carved each thorn from the stem and handed it to Norah.

"That sort of sealed our friendship I think," Dan says.

From then on Tara decided Dan was family, and they visit him about every week. 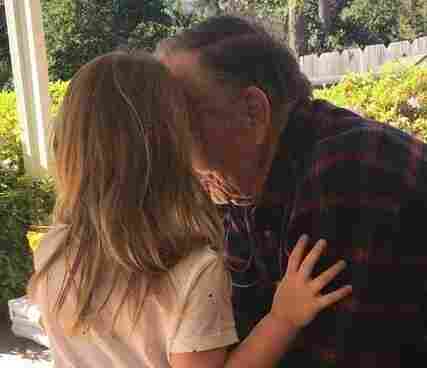 A friendship between a four-year-old and an 81-year-old might seem unlikely, but Dan Peterson says Norah Wood gave him a reason to live again after his wife died. Courtesy of Tara Wood hide caption

They giggle, tell each other secrets and spend time in his yard.

"I go in his garden where he grows vegetables," Norah says.

"Norah got me out of the loop, gave me something to live for," Dan says. "It's like the sun came out, you know?"

A previous version of this story misspelled Norah Wood's first name as Nora.