Accessibility links
A Classics Professor Explains 'Why Bob Dylan Matters' Harvard professor Richard F. Thomas teaches a popular class on the importance of Bob Dylan, and now he's turned it into a book, full of stories, personal history and the occasional comparison to Ovid. 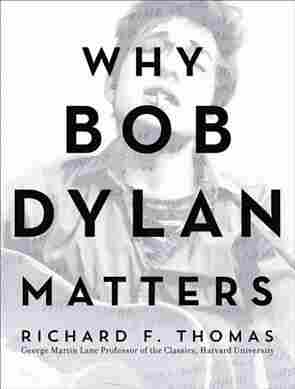 Bob Dylan's Nobel Prize for Literature in 2016 set off howls of indignation across the literary spectrum. Everyone from bloggers to bestsellers weighed in on why Dylan — while universally acknowledged to be one of the greatest songwriters of all time — had no place in the pantheon alongside Faulkner, Hemingway, and Beckett. Dylan's refusal to travel to Stockholm to accept the award in person only fanned the flames of resentment and bewilderment.

But plenty of defenders have stood up for Dylan's award — including Richard F. Thomas, a Harvard classics professor who teaches a popular class on Dylan that examines his legendary body of work, its context, and its cultural impact. Thomas' new Why Bob Dylan Matters is based on that class.

Any book born this way has an uphill struggle not to seem overbearingly didactic, and at that, Thomas succeeds with brilliance and verve. Rather than coming across like a fleshed-out syllabus, the book joyously bounces from topic to topic, mixing anecdotes about Dylan's creative process, historical concerts, and wry press conferences with penetrating literary critique — and no shortage of Thomas' own personal recollections of bonding with Dylan's music. In one of these reminiscences, the author warmly discusses how his two great passions as a grad student in the early '70s — the epic poets of the Greco-Roman world and the heady, wordy folk-rock of Dylan — dovetailed into a kind of unified field theory linking Dylan to that ancient tradition.

Thomas rolls up his sleeves and tackles Dylan's oeuvre with glee. From his earliest classics to his self-reinvention with the album Modern Times in 2006, Dylan charted an erratic course, Thomas argues, that put him parallel to the gods of literature — including Ovid, whose work he places side-by-side with Dylan's lyrics. It's an eye-opening comparison that shows just how much Dylan stood, without apology, on the shoulders of giants. "Blowin' in the Wind," a song that's been dissected incessantly since its release in 1963, receives a fresh inspection; Thomas focuses on its exquisite structure, while framing it in terms of the expectations and restrictions of songwriting during that era.

Thomas also devotes ample page-time to Dylan's one bona fide work of conventional literature, Chronicles, Volume One, the songwriter's 2004 memoir — a book he praises for its ability to render the Greenwich Village of the '60s as "a carnivalesque museum" while veering from hushed autobiography to superheroic myth.

As astute and bursting with enthusiasm as Why Dylan Matters is, it occasionally strikes a sour note. Thomas' observations about fellow Dylan fans who love to complain that he doesn't play enough hits in concert come across as hipper-than-thou, and the author can't resist inserting a dig against people who look at their cellphones at concerts. This modern phenomenon, he says, is especially tragic at a Dylan show, where apparently everyone in the audience should receive his music with nothing less than rapt and studious awe. It's only a stray observation on Thomas' part, but it reflects an area where Why Dylan Matters falls a little flat — its consideration of Dylan's status as a pop star and marketed icon who can be enjoyed on a strictly surface level, without having to parse the literary references in his songs. Anyway, for all Thomas knows, those millennials on cellphones at Dylan concerts may be looking up his lyrics and comparing them to Ovid.

Those looking for an evenhanded and dispassionate exegesis of Dylan's lyrics should search elsewhere; instead, Thomas has delivered a highly informed, yet intimately personal celebration of one of our most important living writers.

An account of Dylan's Nobel adventure comprises the final chapter of the book, and it's a doozy. Starting with the 20-year campaign to get Dylan recognized by the Swedish Academy, Thomas tells a dramatic story of internecine political warfare on the international literary scene. In doing so, though, he tends to gloat and gloss over the resistance to Dylan's win. "But by the time of the ceremony in Stockholm on December 10, 2016, naysayers in the media and blogosphere had largely been silenced," he writes with a streak of smugness. It's entirely possible that the naysayers, a full two months after the announcement, had simply moved on to covering other things in the news cycle.

Naturally, a book titled Why Bob Dylan Matters should be — and is — unswervingly partisan when it comes to its subject. Those looking for an evenhanded and dispassionate exegesis of Dylan's lyrics should search elsewhere; instead, Thomas has delivered a highly informed, yet intimately personal celebration of one of our most important living writers — not despite, but because of the medium in which he writes.