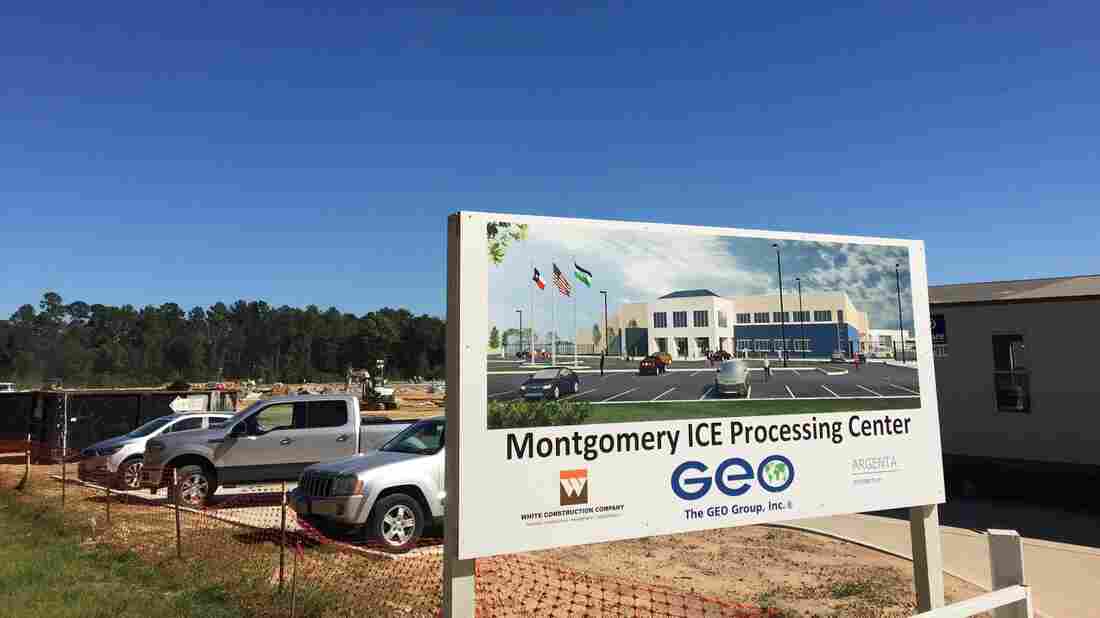 A new Immigration and Customs Enforcement detention facility on this site in Conroe, Texas, will house up to 1,000 immigrants at a cost of $44 million a year to U.S. taxpayers. John Burnett/NPR hide caption 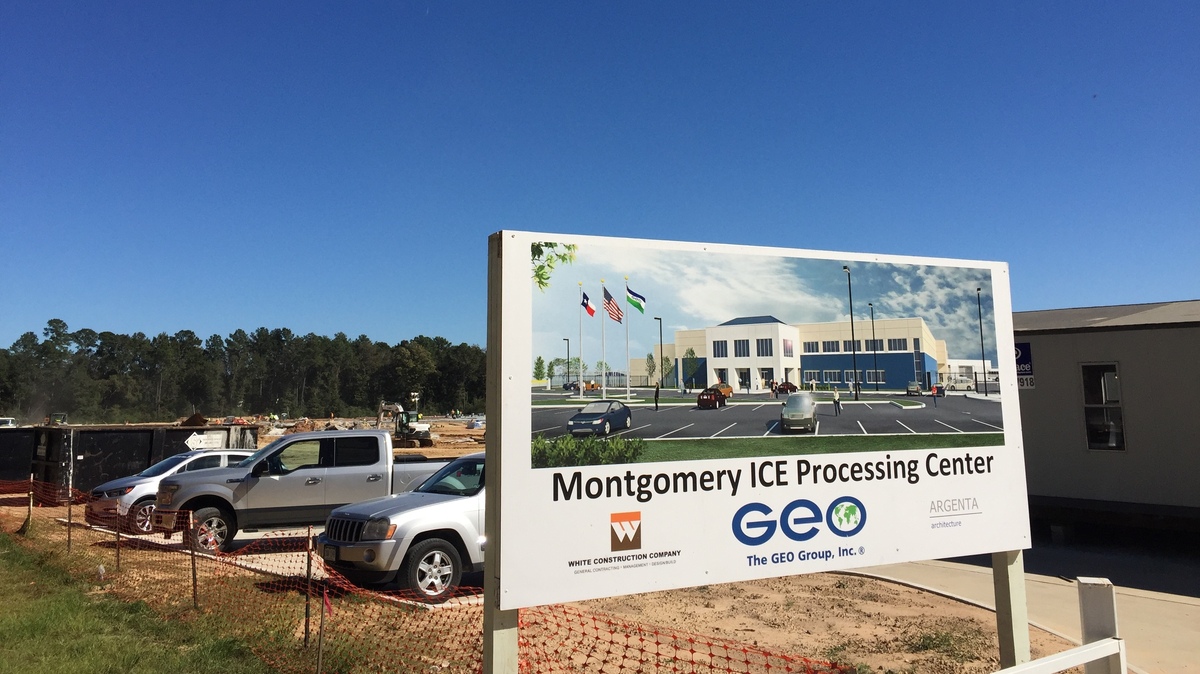 A new Immigration and Customs Enforcement detention facility on this site in Conroe, Texas, will house up to 1,000 immigrants at a cost of $44 million a year to U.S. taxpayers.

The Trump administration wants to expand its network of immigrant jails. In recent months, Immigration and Customs Enforcement has called for five new detention facilities to be built and operated by private prison corporations across the country. Critics are alarmed at the rising fortunes of an industry that had fallen out of favor with the previous administration.

The Joe Corley Detention Facility is a sprawling complex surrounded by shiny concertina wire located in Conroe, Texas — about an hour north of Houston.

ICE spends more than $2 billion a year on immigrant detention through private jails like this one.

ICE and the U.S. Marshals Service pay GEO $32 million a year to house, feed and provide medical care for a thousand detainees.

Between 2013 and 2014, Douglas Menjivar was one of those ICE detainees.

Menjivar says he was raped by gang members in his cell, and when he reported it to the medical staff they mocked him. ICE found the rape allegation to be unsubstantiated. His lawyer has filed a federal civil rights complaint.

Menjivar also says he was forced to work for a dollar a day.

"Lots of things happened to me in Conroe," he says.

He is a 42-year-old Salvadoran who entered the country illegally and is charged with violating a prior deportation. He's out now, fighting to get legal status in immigration court.

Menjivar has become a bitter critic of immigrant detention centers, which are supposed to be holding facilities for civil matters, not prisons for meting out punishment.

The forced labor allegations are part of two class-action lawsuits in federal court.

GEO "strongly refutes" these claims and plans to fight them. In an emailed statement, the company says detainee labor is voluntary and immigrant workers are paid a dollar a day because that's the rate set by ICE. GEO also says it provides "culturally responsive services in safe and humane environments," and that all of its facilities comply with national detention standards.

"GEO has a long history of providing culturally responsive services in safe and humane environments that meet the needs of individuals in the care and custody of federal immigration authorities as confirmed in the U.S. Department of Homeland Security Advisory Council report in 2016 on privately operated ICE facilities. As a matter of long-standing policy, GEO does not take a position on or advocate for or against any immigration policies, such as the basis for an individual's detention or the length of detention."

"GEO has consistently, strongly refuted the allegations made in this lawsuit, and we intend to continue to vigorously defend our company against these baseless claims. The volunteer work program at all immigration facilities as well as the minimum wage rates and standards associated with the program are set by the Federal government under mandated performance-based national detention standards. Our facilities, including the Aurora, Colo. Facility, are highly rated and provide high-quality services in safe, secure, and humane residential environments pursuant to the Federal Government's national standards."

But these are just the latest grievances against the business of immigrant incarceration. Human rights groups, including Human Rights First, Human Rights Watch, Detention Watch Network and the Inter-American Commission on Human Rights have compiled reports of medical neglect and deaths in custody. They claim corporations skimp on detainee care in order to maximize profits.

"I don't get the impression that the Trump administration has any interest in implementing new detention reforms. If anything it looks like they may be eliminating some safeguards," says Kevin Landy, who was director of the Office of Policy and Planning at ICE for six years. That office tried to reform federal oversight of immigrant jails during the Obama administration. He also advocated for raising the pay rate of a dollar a day, which was set in 1974.

"I believe contractors save a lot of money by using detainee labor because they're performing work that would otherwise have to be performed by paid employees," Landy says. That work includes cooking and cleaning the facility.

But now, ICE is shutting down Landy's old office and moving the functions elsewhere in the agency.

"It is incredibly scary to contemplate the notion that ICE would be removing even the dysfunctional oversight that currently exists," says Carl Takei, senior staff attorney with the American Civil Liberties Union's National Prison Project.

At the same time, immigration authorities want to increase detention space. In its latest budget request, ICE has asked for more than 51,000 detainee beds — a 25 percent increase over the last year.

It's good business sense to have bed capacity in close proximity to where our operations are.

Immigrant advocates wish the agency would use more alternatives to detention, such as electronic ankle monitors.

ICE, however, believes lockups are the surest way to get detainees to show up in immigration court. So ICE is turning once again to the private prison industry.

"I think what's driving this is the administration wants to make a point that they're serious about immigration enforcement," says Lauren-Brooke Eisen of the New York University School of Law. She's author of a new book, Inside Private Prisons.

The Obama administration took the extraordinary step of phasing out contracts with private prisons that house immigrants convicted of crimes committed in the U.S. The Justice Department found these prisons fall short on safety and security, and are no cheaper than those run by the federal government.

Since Trump took office, the Bureau of Prisons has restored those contracts.

Traditionally, ICE has put its jails in border states close to where most people were caught. But immigration agents under Trump have been much more aggressive in the interior.

"As we continue to have increased operational control of the border, and the numbers of arrests on the border go down, at the same time our arrests in the interior are going up," says Phillip Miller, deputy executive associate director for ICE Enforcement and Removal Operations. "It's good business sense to have bed capacity in close proximity to where our operations are."

Back in Conroe, Texas, a second GEO jail is now under construction. That facility will house 1,000 inmates at a cost to taxpayers of at least $44 million per year.

"But what they're building is another prison," says Menjivar, the man who was detained there. "For me it's a bad idea. They're psychologically mistreating immigrants."