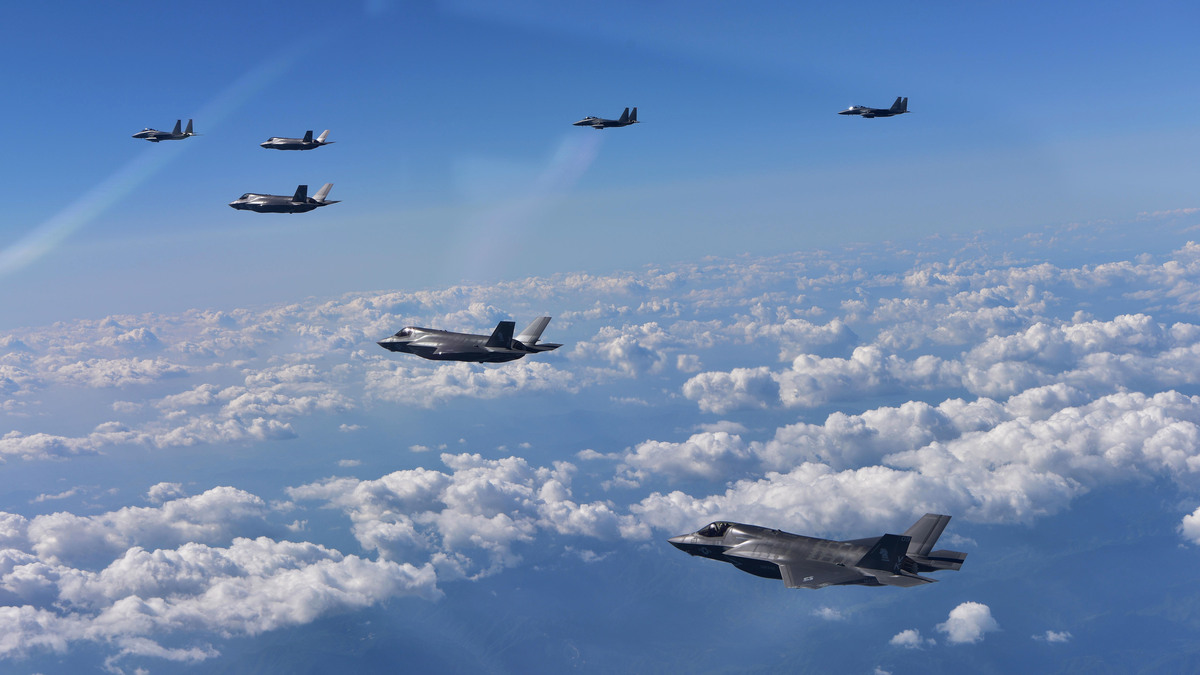 South Korean and U.S. marine fighter jets fly over the Korean Peninsula during a training on Aug. 31, 2017 in Gangwon-do, South Korea.

President Trump's unorthodox approach to foreign policy is causing rising anxiety among lawmakers and experts who worry about his singular authority to launch nuclear weapons.

While the first use of nuclear weapons is generally prohibited under international law, the speed of executing a strike means it would be difficult to stop the president if he decided to launch a unilateral attack, says Bruce Blair, a former nuclear missile launch officer and co-founder of Global Zero, a group that advocates eliminating nuclear weapons.

Shaken By Trump, Senators Ask: What Stops Him From Launching Nukes?

Speaking at the Halifax International Security Forum on Saturday, Air Force Gen. John Hyten, commander of U.S. Strategic Command, said that he would challenge an order from Trump if it were illegal.

"I provide advice to the president," Hyten said. "He'll tell me what to do, and if it's illegal, guess what's going to happen? I'm gonna say, 'Mr. President, that's illegal.' Guess what he's going to do? He's going to say, 'What would be legal?' And we'll come up with options of a mix of capabilities to respond to whatever the situation is, and that's the way it works."

But the president's sole launch authority has ignited a debate about whether there should be more checks and balances on the president's actions. As tensions between the U.S. and North Korea escalate, a group of senators raised concerns about Trump's temperament to handle this responsibility at a Senate Foreign Relations Committee hearing last week.

"We are concerned that the president of the United States is so unstable, is so volatile, has a decision-making process that is so quixotic that he might order a nuclear weapons strike that is wildly out of step with U.S. national security interests," said Connecticut Democrat Chris Murphy.

Blair says that in order to launch a weapons strike, the president must alert his military aide who holds a suitcase, the so-called nuclear football, which contains attack options. Once the president orders the strike using a special code, the Pentagon immediately transmits the order to launch weapons.

Trump Designating North Korea As A State Sponsor Of Terrorism

Strategic Command also receives the order, but Blair explains, "If they felt that it was a really bad call or illegal, and they wanted to try to override it, they could try to transmit a termination order, but it would be too late."

Blair also says the legality of using nuclear weapons is unclear, which means the decision really is up to the president.

"The first use of nuclear weapons is almost invariably going to be illegal because they're not necessary and because they will cause collateral damage against civilian populations and in other ways violate the law of war," Blair says. "But that's not really the way that it's viewed from the inside."

In a 1996 advisory opinion, the International Court of Justice concluded that the threat or use of nuclear weapons generally violates international law governing armed conflict and humanitarian law, declaring that "states must never make civilians the object of attack."

But according to the Arms Control Association, a legal gap allows for the possible lawful use of such weapons.

The court stated in its opinion "that it cannot reach a definitive conclusion as to the legality or illegality of the use of nuclear weapons by a State in an extreme circumstance of self-defence, in which its very survival would be at stake."

Though only Congress has the power to declare war, retired Air Force Gen. Robert Kehler, former commander of Strategic Command, testified last week that "only the president of the United States can order the employment of U.S. nuclear weapons." Massachusetts Republican Sen. Ed Markey has proposed legislation that would require congressional approval for any first use of nuclear weapons.

When pressed further by senators, Kehler said he didn't know what would happen if Trump ignored the military's order to stand down on a nuclear strike deemed illegal. Lawmakers on both sides of the aisle agreed this would amount to a constitutional crisis.

Blair agrees there are not enough people in the chain of command to slow down the authorization process.

The nuclear codes are "the length of a tweet," he says. "It would take them one or two minutes to format and transmit that directly down the chain of command to the executing commanders of the underground launch centers, the submarines and the bombers."