Accessibility links
'Darkest Hour': In A World At War, A War Of Words Gary Oldman (and a pair of latex jowls) star as Winston Churchill reckoning with the lonely decisions that imperil thousands of soldiers' lives.

'Darkest Hour': In A World At War, A War Of Words

'Darkest Hour': In A World At War, A War Of Words 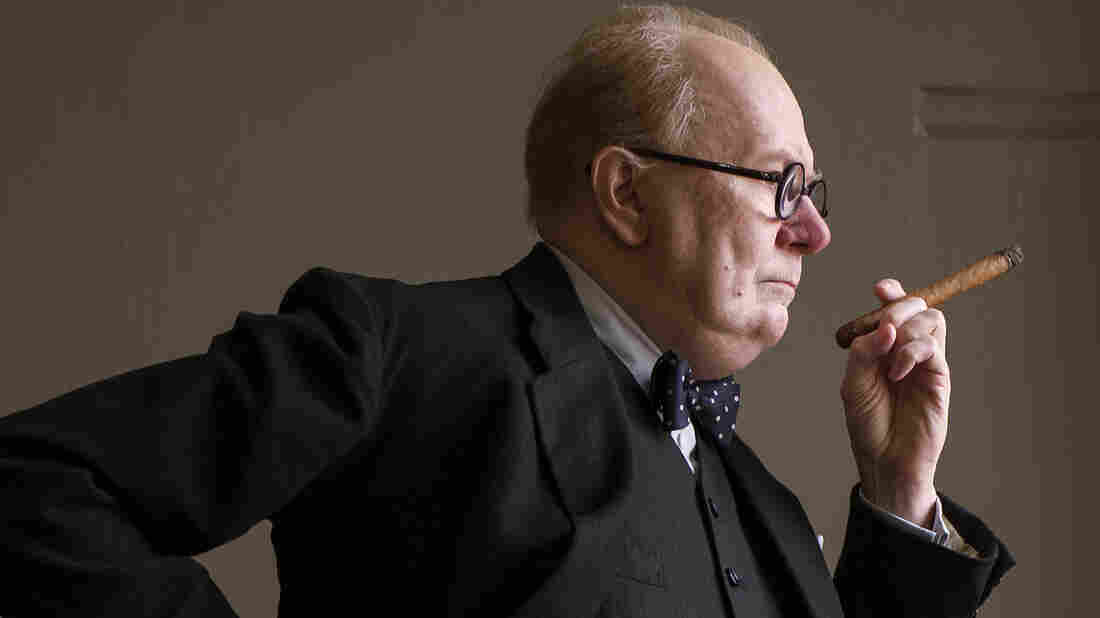 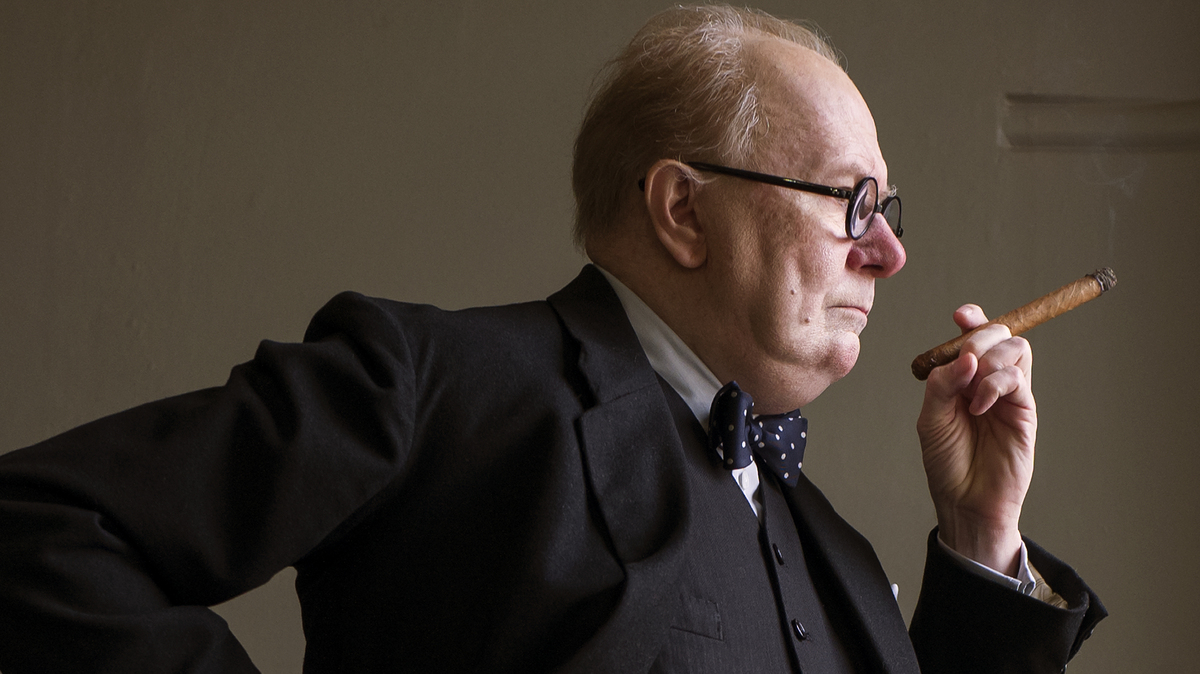 Through an accident of timing, 2017 has produced complementary films about British perseverance and moxie at a dangerous inflection point in World War II, when 300,000 men were penned in by encroaching Nazi forces in France. Earlier this summer, Christopher Nolan's Dunkirk celebrated the multi-pronged effort to rescue these soldiers and bring them back across the English Channel, where they could regroup and continue the fight. And now Joe Wright's Darkest Hour delves into the behind-the-scenes machinations that made the evacuation possible, when it wasn't entirely clear that Britain would steel itself for the duration. One film is all exteriors, a scaled-up overview of dogfights, channel-crossings, and mass movements across beaches and oceans. The other is a chamber piece, set largely in the corridors of power, where decisions over the fate of the world are made over whisky and perspiration.

Winston Churchill is never present in Dunkirk, but his famous speech to the House of Commons on June 4th, 1940 —"We shall fight on the beaches, we shall fight on the landing grounds, etc."— is the connective tissue that unites it with Darkest Hour, which details the fraught political circumstances that brought that famous piece of oratory to fruition. Wright had visited Dunkirk earlier in his 2007 film Atonement, which culminates in a celebrated single-take overview of the scene, but now he's chosen to reexamine the period at a time when the European Union is fraying once again. Despite the intimacy of his approach, there's as much a broad-strokes patriotism to Darkest Hour as there is to Dunkirk, more a distillation of a complex situation than the fullest possible examination of it.

Beyond their settings, the chief difference between two films is artillery: Darkest Hour is about the weaponization of rhetoric, with words dropping like bombs. But they're not so easily deployed. Hidden behind resplendent latex jowls, Gary Oldman plays Churchill as a stout-hearted but deliberative man who's willing to paddle against the political tide, but doesn't arrive at his confidence easily. Willing the country to fight the Nazis to the bitter end, whatever the cost, may seem like the obvious decision in retrospect, given the tyranny of fascism and Adolf Hitler's less-than-stellar reputation for abiding by peace agreements. But the film articulates the dangerous realities of a moment in history where capitulation was the more prudent route.

Darkest Hour takes place in May 1940, when Parliament has lost faith in the Conservative prime minister Neville Chamberlain (Ronald Pickup) and Churchill gets the job mainly because he's the only candidate the opposing party finds acceptable. Though Churchill argues for continued engagement against Hitler, even as the Germans are overwhelming Belgium and France and the United States has yet to be drawn into the war, he immediately faces resistance and a rapidly dissipating faith in his abilities. Chamberlain and the Earl of Halifax (Stephen Dillane) are pressing him to negotiating a peace deal with Hitler through Italy and allies like King George VI (Ben Mendelsohn) grow impatient with his stubbornness and political mistakes.

The women in his life, chiefly his brutally candid wife Clementine (Kristin Scott Thomas) and his working-class secretary Elizabeth Layton (Lily James), do much to steel him for the fight, but Wright emphasizes the fundamental loneliness of a leader when it comes time to make a consequential decision. In the one conspicuously absurd scene in the film, Churchill rides the Tube with ordinary Britons, who of course affirm the rightness of his thinking and the wrongness of the stuffed shirts who presume to know what the country's citizens are willing to withstand.

Darkest Hour excels whenever Wright isolates Churchill in suffocating spaces where he seeks counsel from those in his inner circle, but mostly has to marinate in crisis. The film is particularly good at showing how information about the hour-by-hour fates of thousands is filtered down to Churchill in a way that makes his decisions seem more abstract, because he cannot bear witness to the history he's so crucial in shaping. The big Dunkirk speech may be a lesson in the power of rhetoric, but in context, it sounds more like a wish cast from darkness, beating back the uncertainties that linger behind the text.