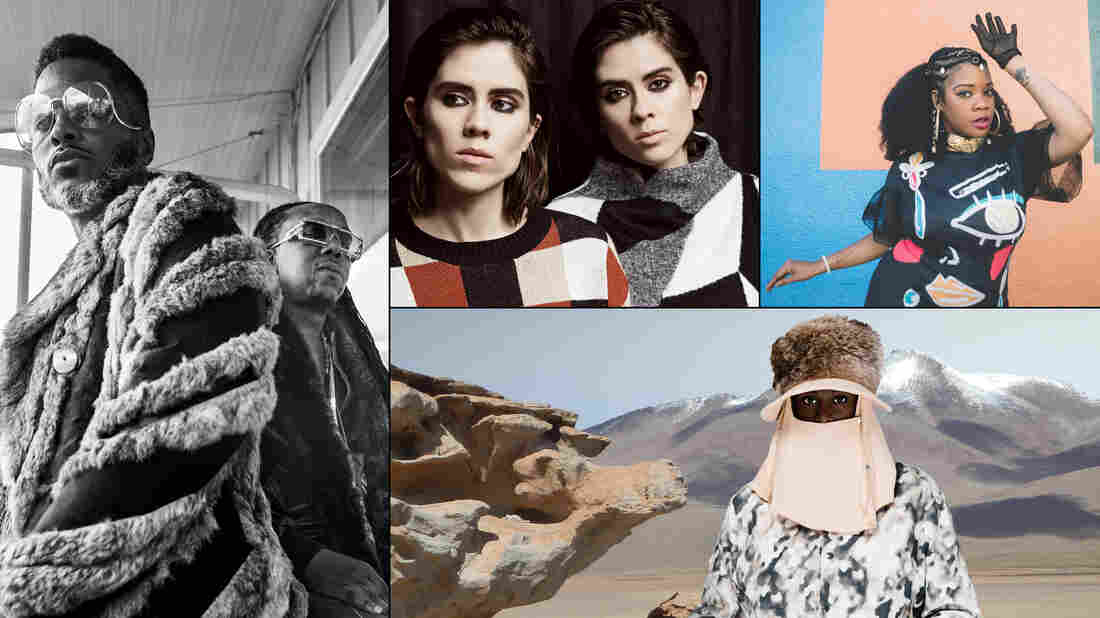 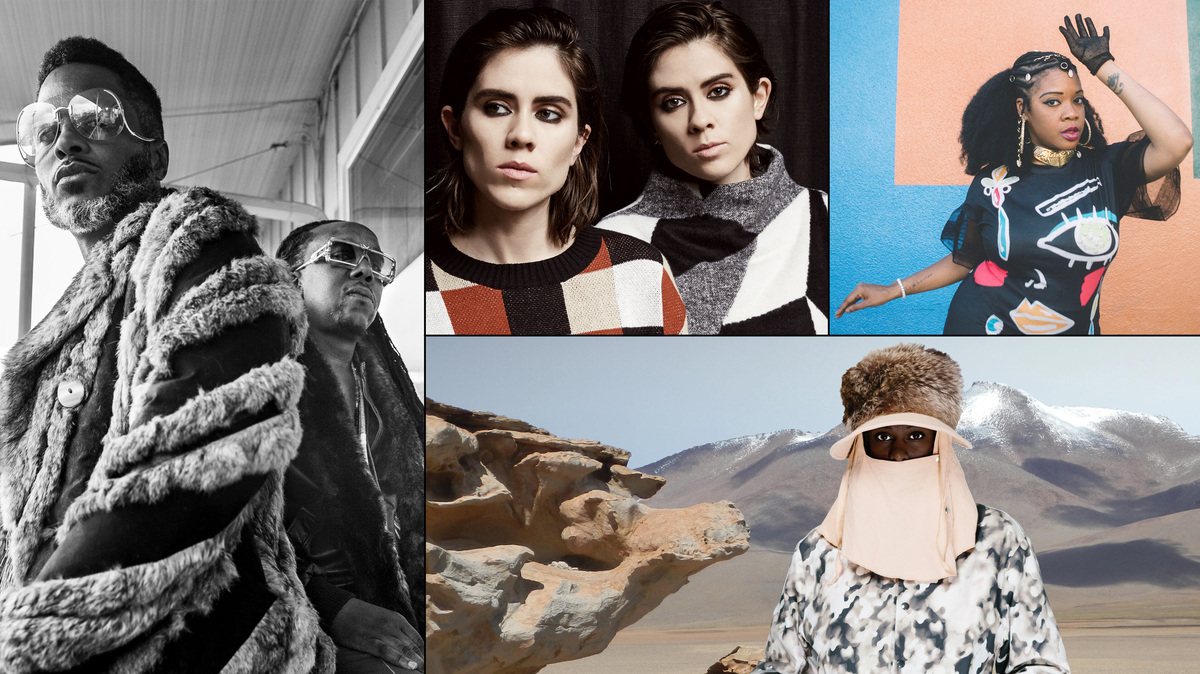 All Things Considered's annual musical gratitude chat is back. On Thanksgiving day, host Ari Shapiro speaks with four different artists who have named one another as musicians to be thankful for. This year, the chain begins with Canadian duo Tegan and Sara, and continues on through UK electronic artist Perera Elsewhere, hip-hop duo Shabazz Palaces and R&B artist Jimetta Rose.

Hear the four-part conversation at the audio link on this page, and read excerpts below.

Sara Quin of Tegan and Sara

On Sara Bareilles covering their song "Floorplan": "Her voice immediately grabbed me, and I'm just forever grateful that she was able to do it. She is just so much better of a singer than I am; it's actually shocking to me when I hear it."

On Perera Elsewhere: "I love that she came up in rave culture, which is similar to what Tegan and I went through in the '90s. ... I love the energy and the descriptions of the show and the music and how things get made. I don't think that narrative is very often in music, especially around women. It's often stuff about breakups and torture tales, and I just love that there's a technical focus. It's just awesome; it's very inspiring."

On how the song "All of This" was produced: "The percussion is made from me banging on a jar or something. ... It's always being filtered; it never stays in one point. It's moving all around you, and the frequencies of that "tick, tick, tick," are changing all the time. The process is so important to me. You can hear all those textures of my voice — it's me pitched, you know? I change the algorithms in my voice, and I like it when I sound a bit cyborg-y."

On the Shabazz Palaces song "Endeavors For Never":

"The first place I listened to it was in a car in India, in Delhi. I'd been to a club, a bass music club, and basically went out with some people and sat in their car — sort of a classic teen thing to do when you're a bit annoyed at the club. The car had a really nice sound system in it. And the whole visual of Delhi, this very kind of dusty, post-apocalypse-looking city — this was the visual backdrop as we drove around in this car and Shabazz Palaces were playing. And it was just like, 'Wow.'"

On the song "An Echo From the Hosts That Profess Infinitum": "The whole vocal kind of morphing sound in that song is based on a little Indian boy singing in Delhi. And as the song goes on, that voice takes on different shapes, but it's all that same boy's voice being morphed in different ways."

On Jimetta Rose: "A friend of mine was DJing and she dropped the needle on this Jimetta Rose song. So I'm grooving along to it for a while, and then I just had to be like, 'What is this?' And she told me that it was this song "Rhythm of Life." And it was smooth and strong and powerful, super-optimistic and soulful. I thought of my mother when she was young, when she was in her 20s: that power, that purpose, and the belief in being able to affect yourself and the people around you with expression and joy. So when I listen to that song it puts me in that frame of mind, I think those kind of thoughts and it's motivating and inspiring. It's beautiful."

On music serving as a spiritual experience: "Any musician is actually a minister of frequency. ... You listen to a song on repeat because you love it when you first hear it — the medicines in that song are working with your energy. And then that song becomes a part of your energetic blueprint."

On the artist she's thankful for, Chaka Khan: "Chaka's voice, I remember being young and thinking, 'Wow. I think I can sound like that.' ... And this was before I had much of an image of Chaka, because when I was young, Chaka was already — not older, but she was one of our divas. I didn't know her more youthful image. So as I continued to discover Chaka, what I noticed was also the uncompromising ability to embody all of the divine feminine principles. She was sexy, she was powerful, she was soft, she was vulnerable. She was strong. She was half-naked and you didn't even pay attention because her voice, her spirit was pressing you to absorb more."