Accessibility links
Review: Neil Young & Promise Of The Real, 'The Visitor' Rage takes many forms in these new songs — laments, exhortations and diatribes about the rapidly changed world in the aftermath of the last U.S. presidential election.

Review: Neil Young & Promise Of The Real, 'The Visitor'

Review: Neil Young & Promise Of The Real, 'The Visitor' 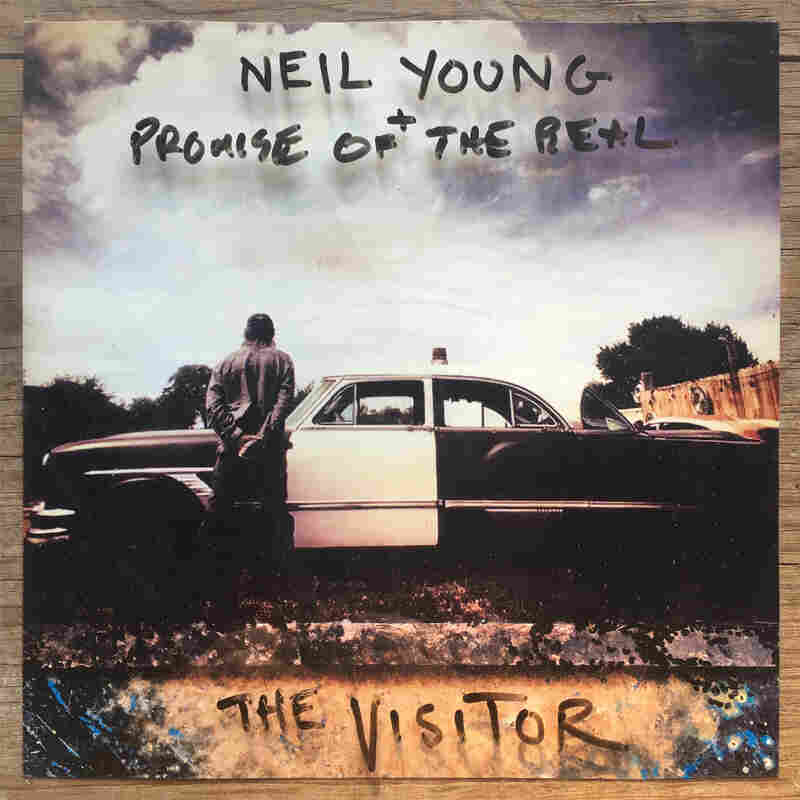 Rage takes many forms in the new songs of Neil Young. If, by chance, you don't connect with the relatively even-tempered opening track "Already Great," which celebrates the United States as "the promised land" and "the helping hand," perhaps something in the key of caustic sarcasm suits you better? That would be track two, and the bone-rattling, inspired-by-Funkadelic groove "Fly By Night Deal." On it, Young alternates between the role of a pipeline project manager barking orders like "Move those animals out of here" and an outraged citizen who screams "No more" and laments "no one sees what's getting lost."

Sometimes the 72-year-old Young is tender and philosophical about the developments that anger him. Consider "Almost Always." One minute he's musing allegorically about birds; the next he's castigating the sitting U.S. president as a "game show host who has to brag and has to boast about tearing down the things that I hold dear."

Sometimes Young lets the music do the snarling: Though "When Bad Got Good" has a refrain borrowed straight from Donald Trump's 2016 campaign – "Lock him up!" – Young doesn't lean too heavily on it. He often mutters the chant under his breath, like a wily old sage, while he and the musicians of Promise of the Real work out the fine points of a swamp-rock groove that distills rage into delicious high-octane sonic abrasion.

And sometimes, particularly on the pasted-together production number "Children Of Destiny," Young disguises his rage behind the bright sing-song cadences of animated Disney films.

Should goodness ever lose
And evil steal the day
Should happy sing the blues
And peaceful fade away
What would you do, what would you say?

The music surrounding that couplet is pure power-ballad treacle, like the hits from Frozen – only even fluffier (if that's possible). It's followed by a comically grandiose fanfare played by a 56-piece orchestra, and that's followed by a large mixed chorus singing flag-waving phrases like "Stand up for what you believe." Those who thrilled to Young's 2003 rock opera Greendale will find much to love here.

"Children Of Destiny" is the only overwrought and over-thought moment on The Visitor, Young's 39th studio album — the album he's using to launch his exhaustive online archive. The remaining nine tracks offer laments, fervent exhortations and heated diatribes about the rapidly changed world in the aftermath of the last U.S. presidential election. Young has always been quick to indignation, but on The Visitor he is careful to vary his tone, if not the target of his ire. (The quietly competent, and open-minded, musicians of Promise of the Real, now in their third collaboration with Young, help greatly with this.)

Viewed one way, the album amounts to a diverse compendium of tactics an artist might employ to express complex emotions (disbelief, fear, betrayal) upon discovering, as Young puts it on "Stand Tall," that one's way of life has been "turned upside down." In the months since the election, pop culture pundits have talked about the response to Trump from the arts, usually in the form of general questions like "Where are the protest songs?" Neil Young weaves the rhetoric of protest into the stanzas of The Visitor — "Already Great" ends with the galvanizing chant "Whose streets? Our streets!" — and a few songs about man's stewardship of nature certainly meet the basic definition of protest music.

But the work as a whole addresses itself more broadly, to the rifts and resentments and underlying conditions that gave rise to this president; its tense dissonances and vitriolic refrains reflect the sordid freak-show surreality of this moment in history. It's not any kind of definitive statement on the age of Trump — more like a quick scan across a ravaged landscape, made by someone with a shaky hand who can't quite believe what he sees.