Accessibility links
Poll: Economists Unanimous That Debt Would Balloon Under GOP Tax Plan A poll found that 38 economists agree the GOP tax plan will not pay for itself through growth. In fact, they're doubtful that growth will happen anyway. 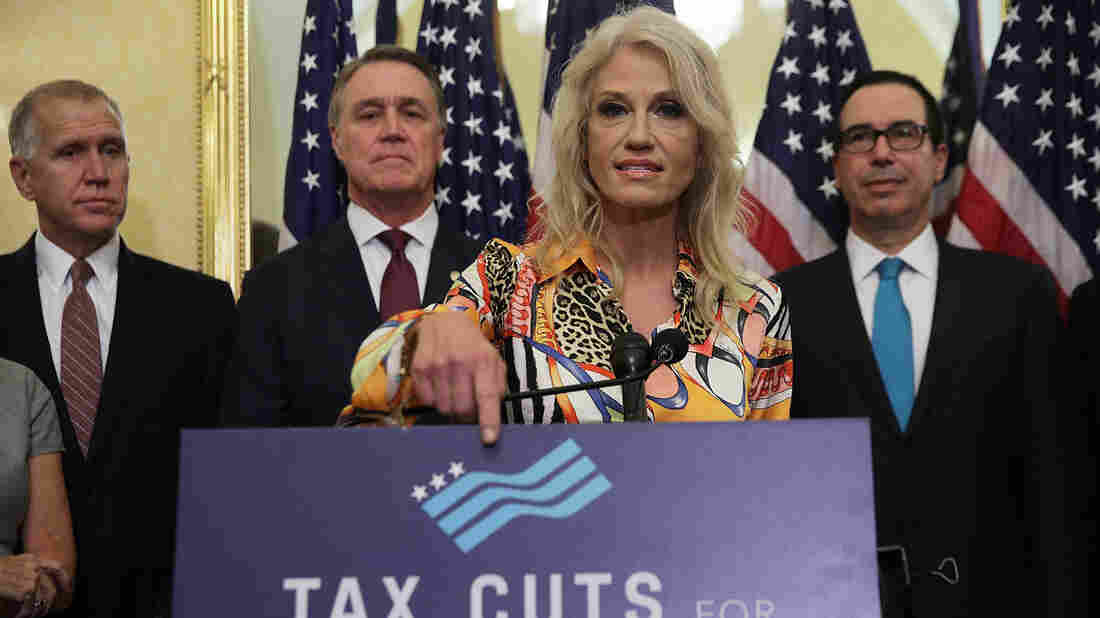 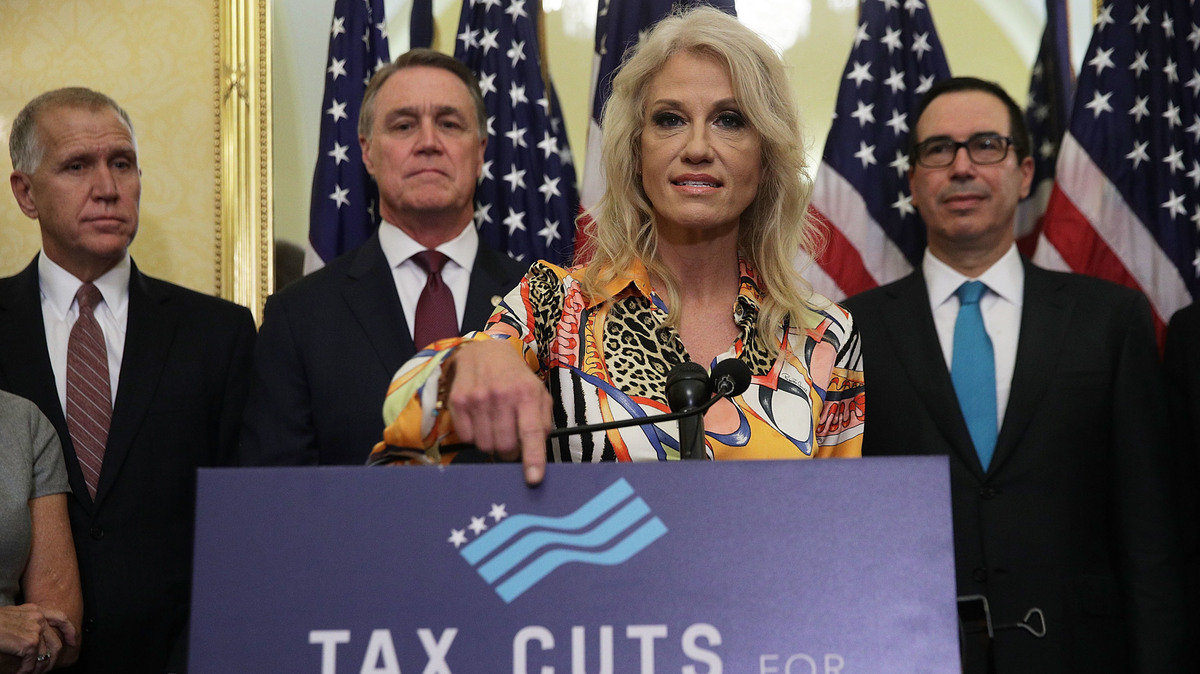 Republicans have been selling their tax overhaul plan as a major booster for the U.S. economy. In fact, they have argued that it would grow the economy so much that cuts would largely pay for themselves.

But on both counts, top economists are doubtful.

Americans Say To Pass The Turkey, Not The Politics, At Thanksgiving This Year

On one question, the economists were asked whether enacting "a tax bill similar to those currently moving through the House and Senate" would lead to a "substantially higher" rate of economic growth a decade from now than it would otherwise. 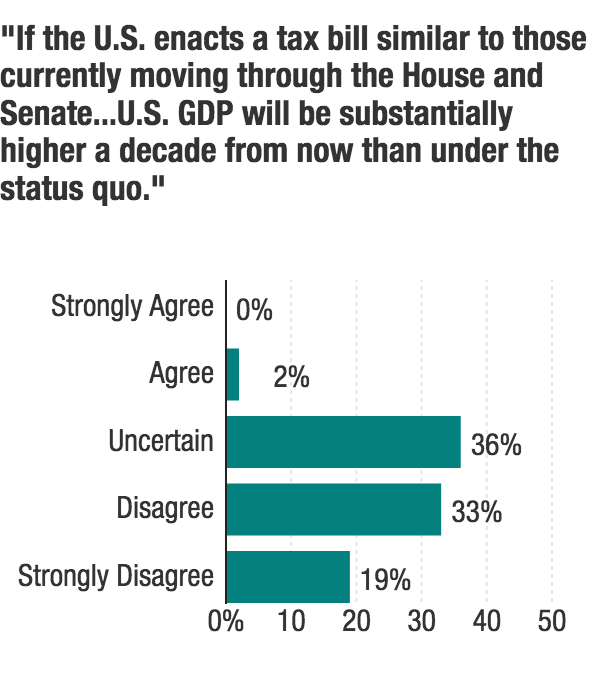 Only 2 percent — or, 1 out of 38 economists — agreed. 36 percent were uncertain, 33 percent disagreed, and another 19 percent strongly disagreed. (The remainder did not answer.)

That one economist who agreed also did so with reservations: While a lower corporate tax rate would likely grow the economy, he wrote, it was "another matter" whether the plan is "fair" in how it spreads the benefits of tax cuts. A recent analysis from the nonpartisan Tax Policy Center, for example, shows the senate proposal disproportionately benefiting some of the richest Americans.

Economists were much more certain about what the tax bills would do to the debt. They were asked whether a tax bill like those in the House and Senate right now would leave the U.S. debt-to-GDP ratio (a common measure of how large the national debt is) "substantially higher" in a decade than otherwise. 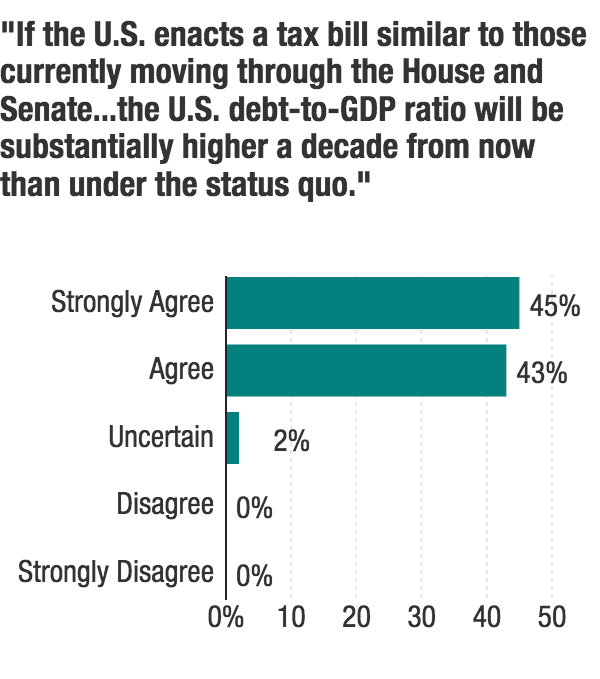 Figures may not add up to 100 because some economists did not answer. University of Chicago hide caption

On this question, fully 43 percent agreed that it would leave the debt level higher, and another 45 percent strongly agreed. Only 1 economist was uncertain. None disagreed.

But there's a catch, yet again, with the one economist who stood alone. That economist, Stanford's Liran Einav, told the Washington Post that he "didn't read the question properly" and in fact agreed with his peers.

This level of consensus from top economists undermines the arguments underpinning the Republican tax plan.

Congressional Republicans have argued that the tax overhaul will launch so much economic growth that it will generate additional revenue, allowing cuts to pay for themselves.

Council of Economic Advisers Chairman Kevin Hassett told reporters at a recent press briefing that he thinks reform of the corporate tax code in particular will send growth soaring.

"The idea that right now we have the highest corporate tax on Earth generating almost no revenue — because people avoid the tax by moving factories to Ireland — that if we fix that, if we repair it and make the U.S. an attractive place again, that it's going to blow a hole in the deficit — it's just not economically rational," Hassett said.

But major models of the tax plan thus far have not found that the plan would launch the kind of growth needed to pay for itself, as the nonpartisan Committee for a Responsible Federal Budget recently noted.

But even when taking into account the potential effects of higher growth — a practice known as "dynamic scoring" — models have still shown Republican tax proposals ballooning the debt. The right-leaning Tax Foundation, for example, found that the House bill would add $1 trillion to the debt over 10 years.