Accessibility links
Brush Up Your Shelley With 'Frankenstein: The First 200 Years' Christopher Frayling's new celebration of Frankenstein is half art book, half scholarly study, tracing the famous monster's path from page to stage to screen, just in time for his 200th birthday. 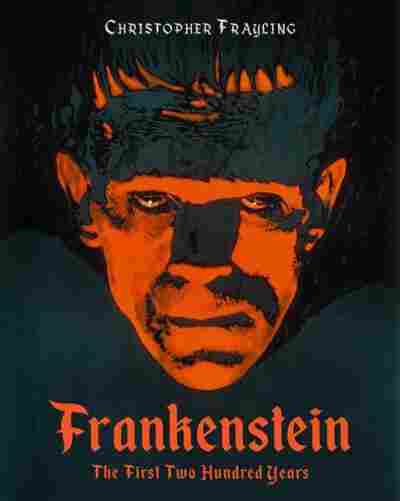 "It was on a dreary night of November, that I beheld my man completed ..."

In the two centuries since publication, Mary Shelley's novel about an obsessive student and his creation has taken on, fittingly, a life of its own. But it is in itself a mystery, eluding attempts to produce a definitive version — and as with other modern myths, it has been shaped anew with every generation. It's a story, both on the page and behind it, that refuses to be simple.

The preparation for a bicentennial Shelley-fest has already begun, with anthologies of Victorian literature setting the stage and reissues planned for its anniversary. And for those hoping to get a head start, pop-culture scholar Christopher Frayling offers Frankenstein: The First Two Hundred Years.

Half scholarly study, half art book, The First Two Hundred Years offers some great details about the story's blockbuster success on the stage, and you-know-this-one glimpses of the movie versions of everyone's favorite monster. But it spends the bulk of its energy on the moving pieces behind the novel itself. Mary Shelley introduced her tale in the famous story contest with Lord Byron and her husband Percy in a villa outside Geneva one dark and stormy night, but beneath it was a sea of contributing factors: Her research into galvanism, her parents' social views, the landscape of their journey, and her own inner strain (as big a demon, Frayling suggests, as anything in their horror stories).

Frayling's an old hand at cultural histories, and his wry narration feels like a casual lecture from an aficionado. Though his enthusiasm for Mary Shelley occasionally veers into the patronizing, he's also clearly invested in her life and work. This becomes particularly useful in navigating Mary's intense and dramatically interwoven companions, and in tracing the novel's many revisions — so many it's still unclear which one she considered definitive. Mary made her own changes, but Shelley never stopped trying to make his mark, whether he was leaving condescending notes in the margins or appointing himself its editor. (Of the "high-strung individuals" in the villa that summer, Frayling often hints Shelley was the worst — a neat trick in a house with Byron in it.)

And though Frayling gleefully notes Frankenstein's critical reception — full of gems like "disordered brains, from whom have sprung those disgusting compounds of unnatural conception, bad taste, and absurdity" — some of the most interesting connections aren't with the novel at all, but with the public's first real taste of the story: the stage.

Given that the novel had limited circulation, it was the stage that made Frankenstein an indelible cultural touchstone, which is both fascinating history and an exercise in how adaptation can overtake an original. From the stage came the idea of a silent creation, a monstrous visage, and the occasional sacrifice of nuance for effect. (In one version that, frankly, sounds like an amazing night out, the onstage monster caused so much carnage a reviewer noted "it would have been difficult to do more unless one killed also the prompter and the musicians in the orchestra.") From the stage came the late-Victorian revival of interest in the novel, and the inevitable, ubiquitous jump to the silver screen.

... for those who want to know more about how this monster was made, 'The First Two Hundred Years' offers a delightful starting point.

In some ways, Frayling's done his job too well; there's so much detail and care in the early research that the film section feels slightly perfunctory by comparison. (This is a book that assumes you know more about Hammer Horror than Geneva's touring schedules in 1816, which ... is fair.) Still, part of the magic of movies is that Boris Karloff's face speaks for itself, and there are plenty of more obscure artifacts to illuminate the development of a story that became part of the public imagination.

Frankenstein and his creation have been used for two hundred years to reflect contemporary anxieties — about science, social responsibility, hubris, family, alienation, uncontrollable change. The novel itself has become a key example of the Gothic, of revising women's place in the literary canon, and of the everyday vagaries of publishing. Together, it's a story steeped in history that is still endlessly modern; for those who want to know more about how this monster was made, The First Two Hundred Years offers a delightful starting point.