Accessibility links
For LGBTQ People Of Color, Discrimination Compounds LGBTQ people of color are more than twice as likely as their white counterparts to say they've been discriminated against because they are LGBTQ in applying for jobs and interacting with police. 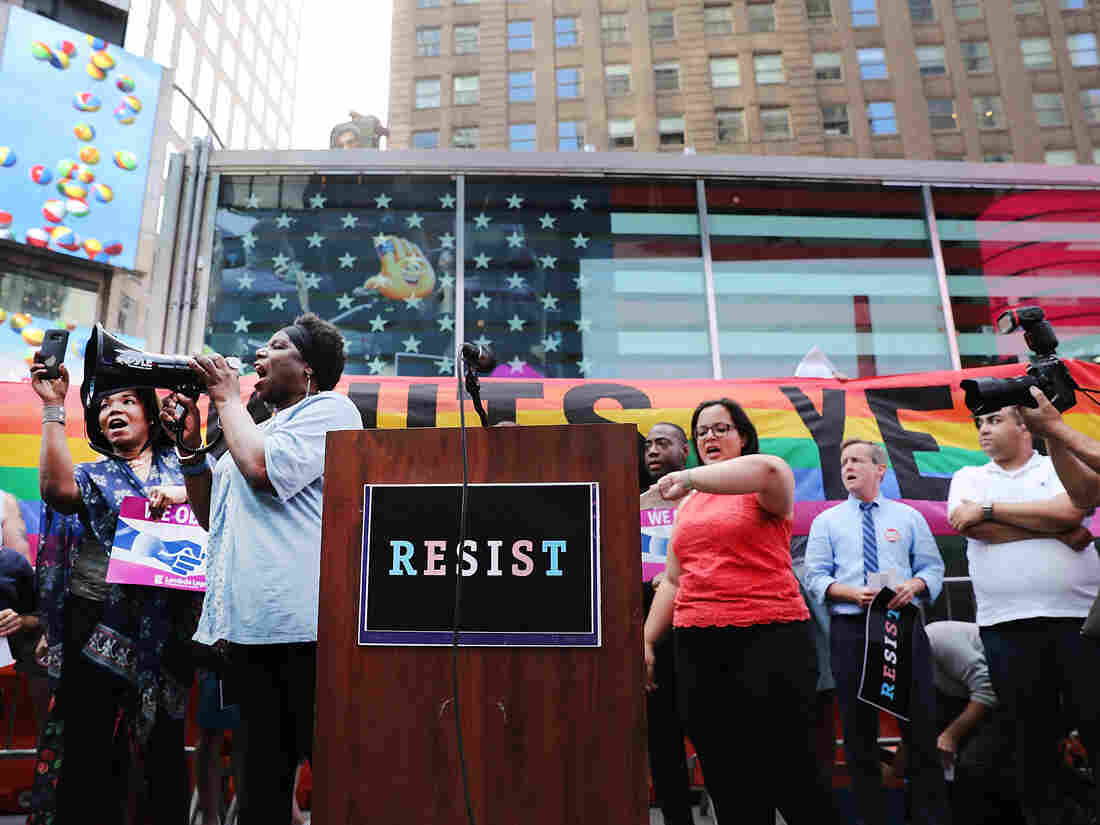 LGBTQ people of color are twice as likely as their white counterparts to say they've been discriminated against because they are LGBTQ in applying for jobs and interacting with police. Spencer Platt/Getty Images hide caption 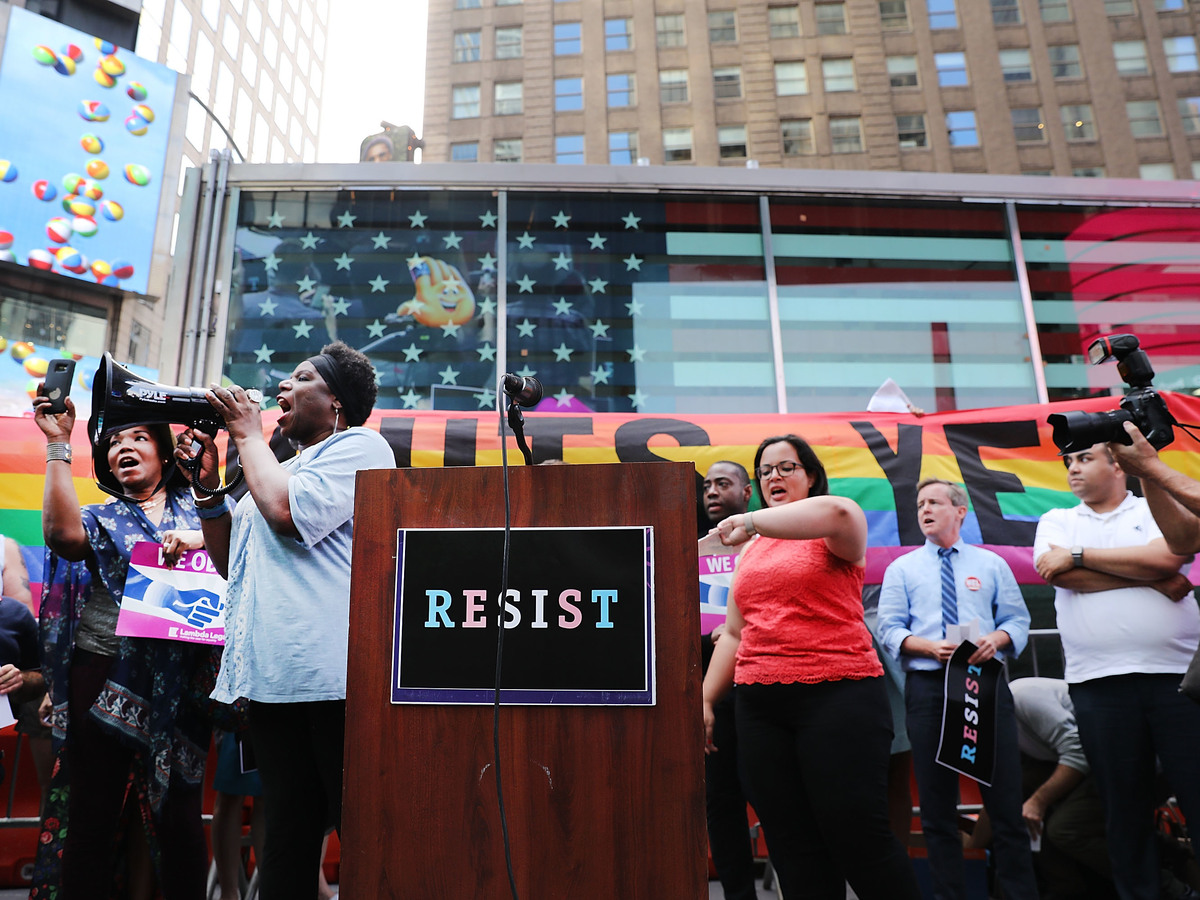 LGBTQ people of color are twice as likely as their white counterparts to say they've been discriminated against because they are LGBTQ in applying for jobs and interacting with police.

Nancy Haque's parents understood discrimination — after moving to the U.S. from Bangladesh, they endured threats, even glass under the tires of the family car. But Haque says the discrimination she faces as a queer woman is different.

"As the child of immigrant parents, it's not like I had to come out as being South Asian," Haque laughs. "But I think that we didn't talk about discrimination."

She talks about it now. Haque is co-director of Basic Rights Oregon, an LGBTQ advocacy group based in Portland. She is committed to bringing civil rights issues to the forefront of LGBTQ organizing.

In 2017, Haque says, "if you're an LGBTQ organization that hasn't taken on racial justice as a key part of who you are and what you do, then you're irrelevant." That is because the discrimination that LGBTQ people of color experience and the resources they have to combat it are compounded by their intersecting identities.

According to a new poll by NPR, the Robert Wood Johnson Foundation and the Harvard T.H. Chan School of Public Health, LGBTQ people of color are more than twice as likely as their white counterparts to say they've been discriminated against because they are LGBTQ in applying for jobs and interacting with police.

The National Black Justice Coalition focuses on the intersection of racial justice and LGBTQ rights. Isaiah Wilson, the coalition's director of external affairs, says LGBTQ people of color are "the most impacted communities" when it comes to discrimination, "be it trans military service, be it access to health care, or if you look at employment."

And according to demographic data collected by the Williams Institute, black LGBTQ people are more likely to live where other black folks live — many of them in the South, says Wilson, "where we don't have state and local protections to be out."

Wilson says given this compounded discrimination, LGBTQ people of color need support. But they don't always get it — because the LGBTQ movement at large has had different priorities. Namely, organizing around the fight for marriage equality that culminated with the Supreme Court's 2015 ruling that legalized same-sex marriage nationwide.

"When you're continuing as a community to face discrimination, harassment, even violence," Wilson explains, "marriage is a luxury. Surviving, being able to participate in community, being able to provide for our families — if I can't do that, who's thinking about a marriage certificate?"

And while communities of color come together around the discrimination and harassment they face, they may not always see LGBTQ issues as part of the same struggle.

In the Latino community, for example, "the perception ... is that it's always been a conservative community," says Ingrid Duran, founder of Familia Es Familia, a group that aims to increase LGBTQ acceptance among Latinos.

And, she adds, "that conservative element comes along with religious beliefs" — primarily those of the Catholic Church, which regards homosexuality as a sin.

But Duran says that is changing. The U.S. Latino population is very young, and young people are increasingly moving away from organized religion — and the Catholic Church itself is changing. And, Duran says, the Latino community is changing on queer issues, especially when there has been outreach and education from groups like Familia es Familia, because of the cultural priority on family.

"Nine times out of 10, a grandparent or a parent is going to accept their child. Because it is their family," Duran says. "And they still hold the same values that they held five minutes before they came out to you."

Some LGBTQ people of color, like Geeta Lewis, never have a chance to come out to their families. Lewis, a black trans woman, recently explained why at a leadership program organized by Basic Rights Oregon.

"Because of the kind of systemic oppression that is typical of people of color, particularly black people, I, at 61, have lived longer than anybody else in my family," she told the group.

Lewis vows to spend the rest of her life fighting entrenched discrimination, so that the next generation of LGBTQ people of color can have a different future: one that is less marked by the kinds of losses she has suffered. She joins a growing number of activists who see that fight as their right, and their duty.