Accessibility links
Is The Streetwear Market Headed For The Mainstream? They stand in line outside stores or use online bots to snag the latest hot sneaker or limited-edition clothing, then resell it at a profit. Resellers are a key driver of a multibillion-dollar market. 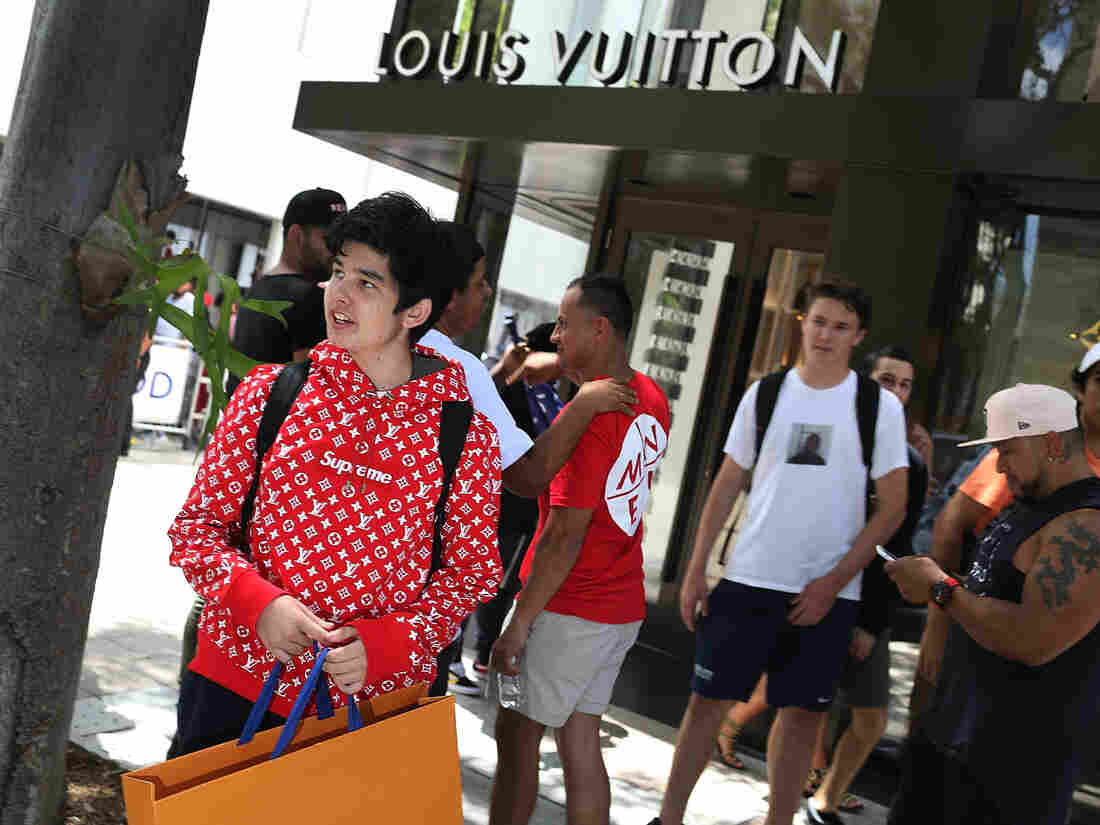 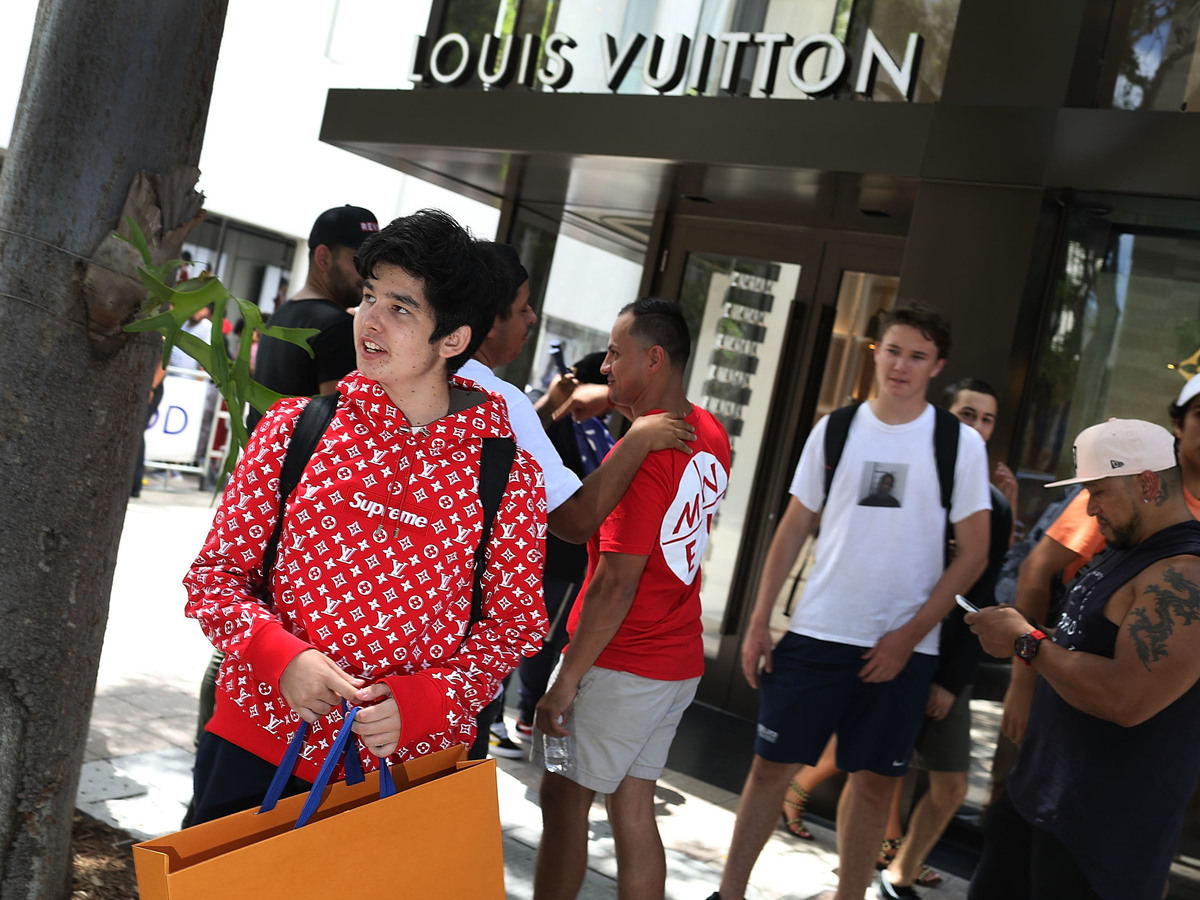 On any given Thursday, thousands of people can be spotted swarming the corner of Rosewood and North Fairfax avenues in West Hollywood. It's not surprising, though, if you know that this Los Angeles location is one of six storefronts around the world of streetwear giant Supreme.

Supreme is known in the streetwear community for releasing new collections almost every Thursday. Hordes of excited shoppers, mostly young men, wait for hours in line to purchase Supreme gear at retail prices.

Here's why: Supreme merchandise, like that of many other contemporary streetwear brands, is worth significantly more in the resale market. For many customers, reselling this gear has become a business and a way of life.

One reseller, Joseph, who declined to give his full name for privacy reasons, says he got into the resale business because "my parents wouldn't buy the high-end stuff, [so] I started flipping in high school to cover my costs" for streetwear purchases. By the time Joseph graduated from college, he had started reselling streetwear full time. Now he has his own reselling platform, called eluXive.

The resale industry has been on the rise. In addition to the original Internet arbitrage tool, eBay, apps like Poshmark and Depop have begun to fuse the worlds of resale and social media.

And the most prominent sector of the resale market today is streetwear — a form of athleisure fashion that produces T-shirts, sneakers, and other ready-to-wear goods often adorned with simple graphics and pop culture references.

Streetwear resellers, members of the larger streetwear community of sneakerheads or hypebeasts, are part of a multibillion-dollar market, an entire industry driven by the existence of a secondary market.

When Supreme collaborated recently with well-known luxury brand Louis Vuitton, the retail prices, resale prices and online hype were all significantly higher than usual. A red Supreme and Louis Vuitton backpack retailed for $3,900 but had a resale value of $9,073, according to StockX, a company specializing in analyzing products' resale values.

The U.S. sneaker resale market alone is around $1.5 billion, and this number excludes private sales that happen on social media, according to StockX founder and CEO Josh Luber.

He says that despite continued growth, nothing will compare to the early 2010s when the market was growing at 30 percent to 40 percent per year.

"Most of that hypergrowth was really based on more people coming to the market, and at the same time the sneaker brands responded with more and more releases," he says.

But "at some point, you can't keep adding new people at that same rate. ... The sneaker brands had gotten to a saturation point because there's only 52 weeks in the year, and they were already maxing out in terms of every week there's four, five, sometimes 10 sneaker releases."

Yet despite slowed growth, in October industry superstar Supreme founder James Jebbia confirmed that The Carlyle Group, one of the largest private equity and alternative investment firms in the world, had purchased a stake of Supreme's private equity. Carlyle invested $500 million for a 50 percent stake in the company, according to industry reports.

This groundbreaking deal marks the first time an equity firm of this size and importance has invested in the streetwear market. The deal reportedly values Supreme at just over $1 billion. If the already overwhelming presence on social media weren't proof enough, this investment indicates that the streetwear market is on the path to the mainstream.

What sets this industry apart is that both the retail and resale markets are heavily dependent on Internet-driven hype, hence the name hypebeast.

Hypebeast, originally a derogatory term for people obsessed with trends, is also the name of a popular blog turned empire that many cite as one of the first influencers of the streetwear resale business.

Founded in 2005 by Canadian Kevin Ma, the site produced content about the newest sneakers and streetwear being released, a niche in the men's fashion market at the time. Now, hundreds of Facebook groups and blogs are dedicated to fueling the hype around this cultural and commercial phenomenon.

Much of the hype is a result of the marketing strategies used by the retailers. Supreme heavily contributed to the streetwear retail culture through its unique sales technique of intermittent "drops" — or sometimes one-time-only releases of products or entire product lines.

And part of the hype comes from the extremely limited advertising strategy. Keeping quiet in the public eye, selling limited quantities and almost never restocking has continued to succeed in creating high demand.

These tactics contribute to the exclusive feel of the brand that draws people in. This, combined with the hype that snowballs on social media, contributes to Supreme's almost 100 percent sellout rate.

Part of the recent mainstream success of the streetwear industry can be attributed to collaborations between streetwear and luxury brands as well as high-profile celebrities. These alliances can include all types of cultural icons, ranging from sport brands like The North Face and Fila to musicians such as Justin Bieber and Kendrick Lamar to character-driven brands like Betty Boop or The Simpsons.

Many cultural icons, specifically hip-hop musicians, have created their own streetwear brands like OVO, owned by Drake, or Kanye West's Yeezy. Collaborations between these celebrity-owned brands and other streetwear retailers create even larger demand and interest.

Despite industrywide stereotypes that the streetwear sector is only popular among teenage boys, one reseller, Jason Mueller, says it's the connection to the hip-hop culture that keeps him involved in the business. "I'm married, three kids, I own my house, I live in the 'burbs, I guess you could say, but I've been DJing for over 20 years and I grew up with the hip-hop culture ... so it's just part of the subculture, I guess."

Mueller confirms that it's not just young people who are capitalizing on the resale market. "I myself buy from resellers and I've talked to folks around my age — I'm 38 — if not older that do this to help pay for their kids' college," he says.

However, people like Mueller are often selling alongside younger entrepreneurs like Brian Ong, a full-time college student who sells streetwear on the side.

Many young people and students, like Ong, are making consistent profits through this business. Ong says he thought "this is something that would be fun ... it was like a little taste of business." Now he says he makes upwards of $150 a week reselling streetwear, while maintaining a full course load.

But how does someone like Ong obtain merchandise that's in such high demand and is released so exclusively? Ong says his, and many others', secret is bots.

An Internet bot is a software application that runs automated tasks — for example, an auto-checkout program on a crowded retail website during a highly anticipated drop.

The most basic bots can go for as little as $1.99 and require nothing more than a Google Chrome extension, while some of the most highly acclaimed bots can range up to $325. AIO Bot, one of the more expensive and popular bots, boasts that it has "helped sneakerheads cop 40,000+ limited edition" sneakers, with total client resale value of nearly $18 million.

People in the industry have mixed feelings about the use of bots. Ong says he uses a bot called Supercop that cost $100. "It's really easy, simple to use and, most importantly, affordable. I love it."

But Mueller has a different opinion: "The bots take away from the culture as a whole ... allowing those that don't necessarily have the money to buy from a resale perspective the ability to buy at retail."

Retailers have been clear about their disapproval of bots. Most sites don't explicitly outlaw bots but have more general terms of service prohibiting resale of purchases. This allows sites to block individual IP addresses linked with suspicious purchases.

Exhibit Laces Together Sneakers And History

Retailers can use different tactics to stop the proliferation of bots, including "ghost carting" — emptying a cart before or during checkout because of suspiciously fast activity — or blacklisting repeat offenders by permanently blocking IP addresses. But the technology continues to evolve, making bots harder and harder to detect.

Joseph, the reseller who created his own resale platform, says bot users are technically "fulfilling all of the terms of the website, but they're kind of doing it in a gray area."

Of those resellers who don't support the use of bots, many agree it takes the fun out of the business. "It's the thrill and the high of 'Am I going get this item?' " Mueller says.

Joseph says, "I kind of like the chase so I like to just go out and get it how everybody else does."

For now the retailers and resellers seem to be in a holding pattern, with each fine-tuning and improving their respective technologies. Though these retailers appear to be anti-bot, it's not hard to see how the use of that technology helps continue to increase the hype surrounding these products. This combined with the huge well of growing demand for streetwear means that, at least for now, bots aren't going anywhere. And neither are resellers.

Ema Sagner is the NPR Treasury and Risk Management intern.

Young Entrepreneurs Find Funky Niche In Products 'Made In Ukraine'