Accessibility links
Advocating For The LGBTQ Community Can Get Its Start In Local Politics LGBTQ leaders in Arizona have seen their biggest cities grow more welcoming toward the LGBTQ community. They hope that shift will help lead to acceptance across the state. 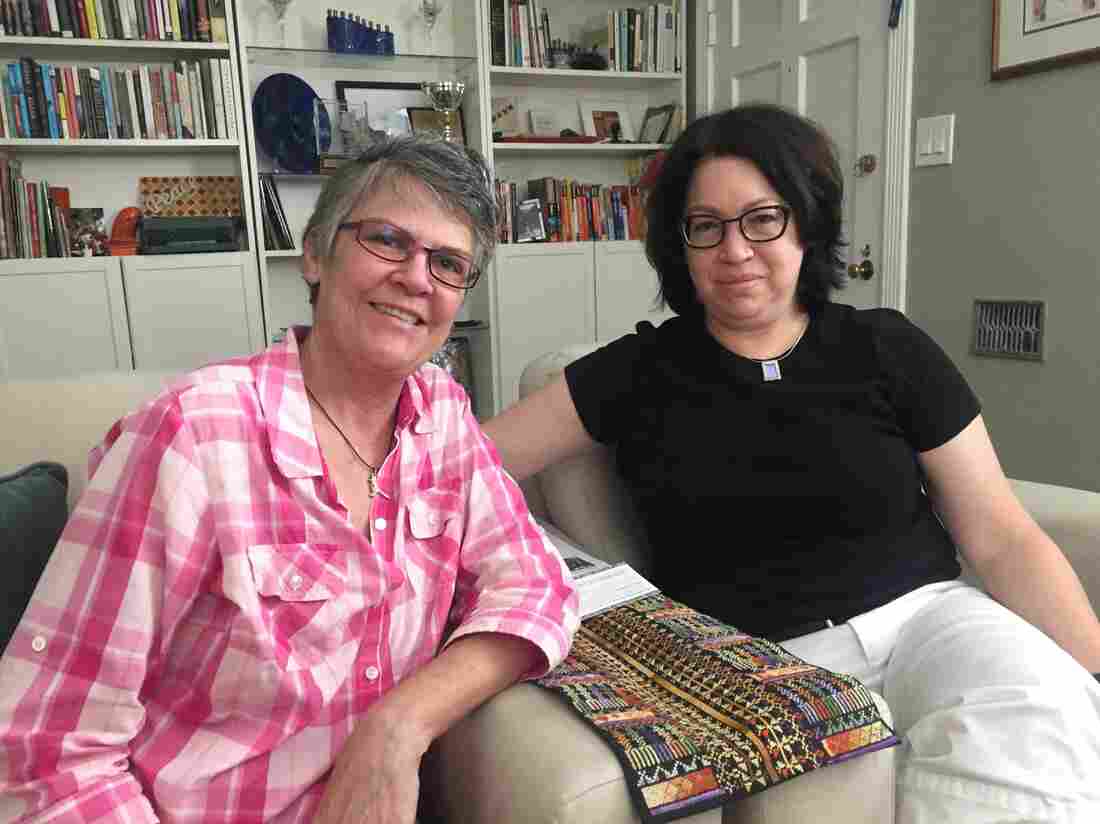 Phoenix residents Laurie Provost (left), 53, and Maddie Adelman, 50, have watched their city become increasingly welcoming toward the LGBTQ community over the last two decades, even as their state has kept in place anti-LGBTQ policies and laws. Will Stone/KJZZ hide caption 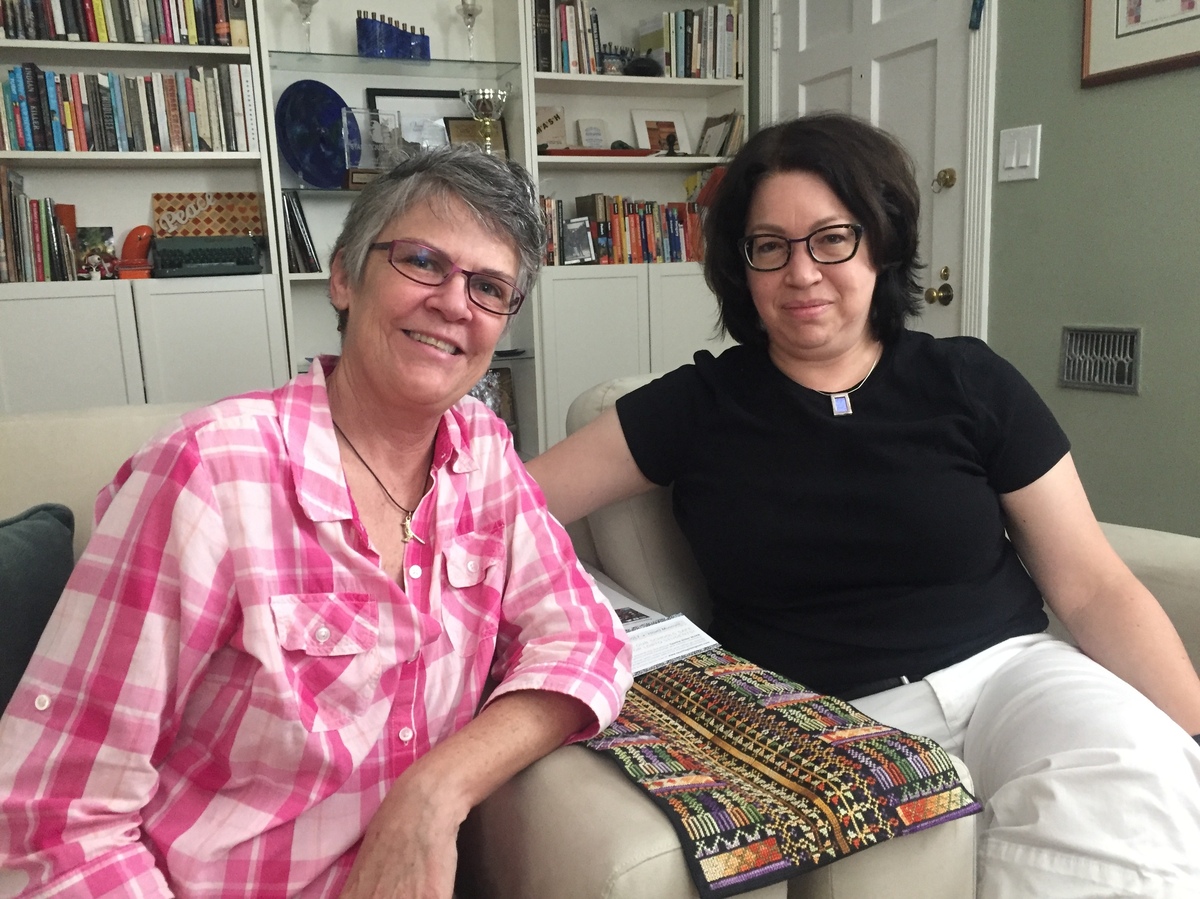 Phoenix residents Laurie Provost (left), 53, and Maddie Adelman, 50, have watched their city become increasingly welcoming toward the LGBTQ community over the last two decades, even as their state has kept in place anti-LGBTQ policies and laws.

When Maddie Adelman moved to Phoenix in the late 1990s, she struggled to build a community. "It was hard to find my people. There were not a lot of people talking about LGBT issues at the time," Adelman, 50, remembers.

Laurie Provost had been working with LGBTQ youth in the area but was looking for opportunities in activism.

The women met at a coffee shop in 2004, bonding over Adelman's blue lunchbox emblazoned with the logo for GLSEN, the Gay, Lesbian and Straight Education Network. Adelman had recently founded a Phoenix chapter of the national advocacy group.

Provost and Adelman hit it off immediately and, over more than a decade, dived into local LGBTQ advocacy together, serving on city boards and advocating for policies like the city's 2013 nondiscrimination ordinance. Through GLSEN, which is pronounced "glisten," they also partnered with area school districts to help teachers, students and administrators work on issues like bullying and discrimination against LGBTQ kids.

Grass-roots efforts like Adelman's and Provost's have brought about a culture shift on LGBTQ issues in Phoenix. This year, the city (along with the state's second-biggest city, Tucson) received a perfect score for inclusivity in the Human Rights Campaign's Municipal Equality Index. Adelman says city leaders in Phoenix have made LGTBQ rights a priority, "because the people of the city have appropriately demanded that they do so."

Now, activists are using the work done in Phoenix as a template for change in other Arizona cities and towns.

"Where we are going to see the most change is the local level," Adelman says. "I'm dedicating my time to working with individual schools, individual cities and seeing if we can knit them together."

But both women say that statewide, Arizona lags behind the rest of the country when it comes to legal protections for LGBTQ people. The state lacks comprehensive statewide employment nondiscrimination laws, and state law even prohibits schools from, among other things, portraying "homosexuality as a positive alternative life-style."

Across the country, more than half of LGBTQ people say they or an LGBTQ friend or family member have personally experienced threats, sexual harassment or violence because of their sexuality or gender identity. Nearly 1 in 5 say they have personally experienced discrimination because of their sexuality or gender identity in the areas of employment, housing or interaction with the police. Those numbers come from a new poll by NPR, the Robert Wood Johnson Foundation and the Harvard T.H. Chan School of Public Health.

But when it comes to local political representation for LGBTQ people, the tone is markedly more positive. The poll shows that nearly two-thirds say their local government represents the views of people like them somewhat or very well.

According to Neil Giuliano, "the local level is the gateway for equality." Giuliano knows firsthand; he served four terms as Republican mayor of Tempe and came out publicly while he was in office in the mid-1990s.

"There were about 38 openly gay elected officials in the country," he recalls. As mayor, Giuliano took pro-LGBTQ stances that angered some of his constituents — even leading to a recall vote in 2001, which he won easily.

"It was very divisive for the community from an emotional standpoint. We went through that and came out much stronger and much better on the other end," he says.

Giuliano went on to lead national LGBTQ advocacy groups GLAAD and the San Francisco AIDS Institute. He says progress in political representation, especially in a conservative state like Arizona, comes from the bottom up: passing local ordinances and getting more people to serve on municipal boards.

"LGBT people, especially on a local level, have been much more fully integrated into the life of their community," he said. "They're neighbors, and friends, people at church." 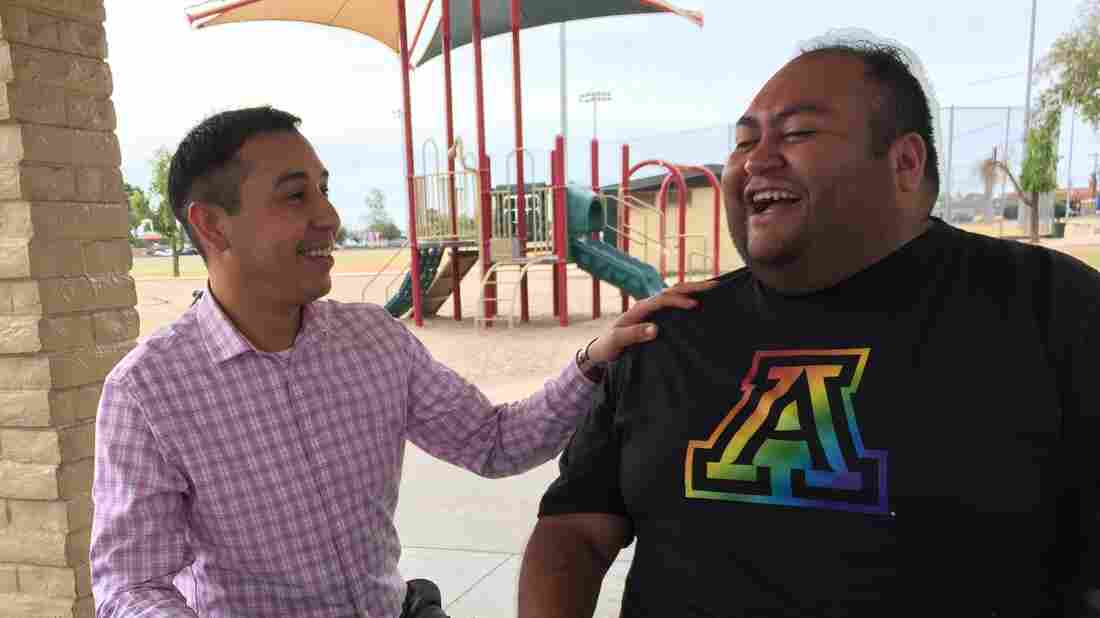 Democratic lawmakers Tony Navarrete (left) and Daniel Hernandez are founding members of Arizona state Legislature's first LGBT caucus, which formed earlier this year. Both believe the growing acceptance of LGBTQ people on the local level will translate into a broader shift statewide. Will Stone/KJZZ hide caption 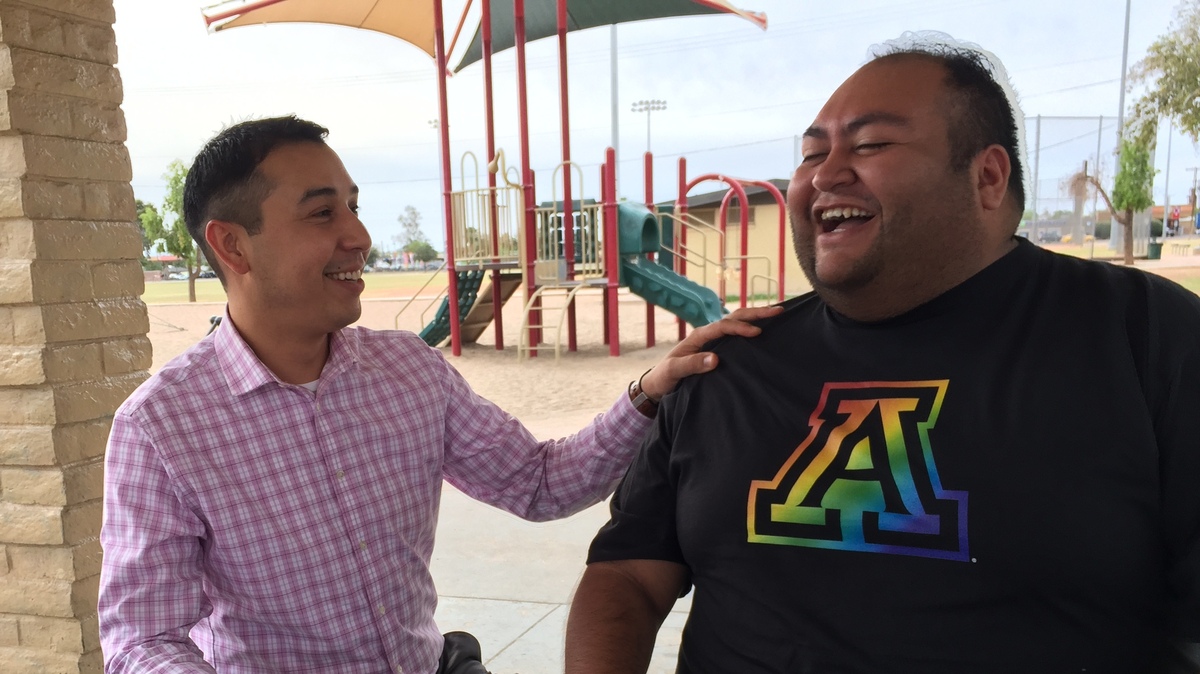 Democratic lawmakers Tony Navarrete (left) and Daniel Hernandez are founding members of Arizona state Legislature's first LGBT caucus, which formed earlier this year. Both believe the growing acceptance of LGBTQ people on the local level will translate into a broader shift statewide.

That was also the story for Daniel Hernandez, who got his start in politics by running for a Tucson school board seat at age 21.

In local politics, "it didn't matter that I was openly gay," Hernandez says. "But what mattered was the work I was doing to represent and the relationships that I had built."

Hernandez says that over time, his constituents, including some who were Catholic and more socially conservative, became more receptive to LGBTQ issues. He says that community support gave him room to make reforms in school policy like protections for gender identity.

Now Hernandez is a Democratic state representative. It's a different political reality for Hernandez in the Arizona Legislature, where he recently helped launch the state's first LGBTQ caucus. There have been openly gay elected officials in Arizona for many years, but Hernandez says the four-member caucus adds a new level of organized support for legislative protections for LGBTQ people.

"There's a point where the stuff happening at the local level reaches a nexus where it has to have an impact statewide," Hernandez said.

He points to a religious freedom bill passed by state lawmakers in 2014. After huge backlash, then-Gov. Jan Brewer, a Republican, vetoed it.

State Rep. Tony Navarrete, another member of the LGBTQ caucus, acknowledges that turning local momentum into statewide change may still be slow going.

But Navarrete says the fact that a road map is beginning to take shape — no matter how winding — is progress.