'The Green Hand' Captures The Colorful Essence Of The Uncanny

'The Green Hand' Captures The Colorful Essence Of The Uncanny 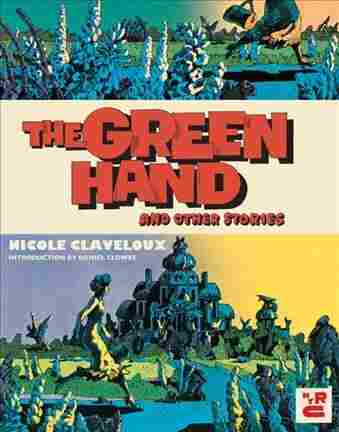 The Green Hand and Other Stories

There are a lot of reasons to shop locally this holiday season, but my favorite one is that, in some small way, it helps keep alive the promise of the uncanny. The sensation that something's not quite right, perhaps even taboo, is serendipity's mysterious sibling. It's a feeling that's endangered in our painfully transparent era, and completely absent from the hygienic, efficient process of shopping via search term. As a shopper, you experience the uncanny when you stumble upon a weird cultural artifact in an odd, out-of-the-way place: say, a Kate Bush picture disc pinned up on the wall of a taxidermy shop, or a 1940s nudie magazine from a bin in the back of a store that also sells Kewpie dolls and antique lingerie.

What's charming about Nicole Claveloux, the French cartoonist and illustrator whose 1970s comics have now been collected into The Green Hand and Other Stories, is that it's hard to imagine finding her anywhere else. In fact, people who admire her seem driven to recount the strange circumstances in which they first encountered her work. "I first met Claveloux while visiting Paris as a teenager in one of the numerous used comic books I had bought at a bouquiniste close to the Boulevard Saint Germain," recalls graphic design professor Laura Ottina on her blog The Animalarium. Even Dan Clowes, in his introduction to the current collection, includes a discovery story: "I remember standing in the mildewed chaos of Larry's Comics in Chicago (RIP), transfixed by the beautiful, electrified colors — unlike any I'd seen before (or since)."

The aura surrounding Claveloux' comics is partly due to their rarity — for a long time, they were unavailable in English. When they were translated for the American market, it was in Heavy Metal magazine, that iconic source of the uncanny for a generation of teenagers. Claveloux' sensibility must have fit perfectly there. She consistently evokes an off-your-axis sensation that's striking even for the 1970s.

True, Claveloux's style resembles those of several artists who preceded her. She uses bright colors and bubbly shapes like Heinz Edelmann and Peter Max, assembling compositions as discordant as those of Peter Blake. But she mashes up and embroiders on their tactics to create a hallucinogenic landscape all her own. Many pages bring together drawings that hardly seem to have come from the same pen. In the very first panels of "The Green Hand," an oversized crow owing much to Robert Crumb shares space with a woman's face that could almost be a Victorian woodcut.

In successive pages Claveloux seems to be testing herself to see how many different ways there are to draw — and to color. Her radiant, hand-separated tones are positively dizzying. As with her line and composition, Claveloux experiments constantly with her approach to color. Sometimes her hues sit flat on the page, Pop Art-style, while other times the cerulean, peach and lapis seem to glow from within.

In successive pages Claveloux seems to be testing herself to see how many different ways there are to draw — and to color.

All that dazzling color makes the book's first two stories standouts. The psychological quest tale "The Green Hand," written by collaborator Edith Zha, is practically enough on its own to justify getting the book. But Claveloux' black-and-white comics are just as engaging and perplexing. "The Little Vegetable Who Dreamed He Was a Panther" is a small masterpiece of surrealism. In "Underground Chatter," a preternaturally verbal baby has an existential argument with a woman on the subway. "The Ninny and Her Prince Charming" and "A Little Girl Always in a Dream" simmer with feminist subversion. In the latter, a young girl imagines getting her first period and triumphantly flooding the world.

It feels a bit like giving away the store to reveal any more about these narratives. They need to be experienced fresh for their full uncanniness to be felt. Fortunately, while it may not be possible to stumble upon this book for the first time at a Paris bouquiniste, there are plenty of indie bookstores and comics shops that can order it. If you're lucky, they might even throw in a Kewpie doll.