Accessibility links
6 Possible Hurdles For The GOP Tax Plan Congressional Republicans hope to pass a sweeping tax overhaul before Christmas, but first they'll have to resolve some major policy differences that could derail the bill. 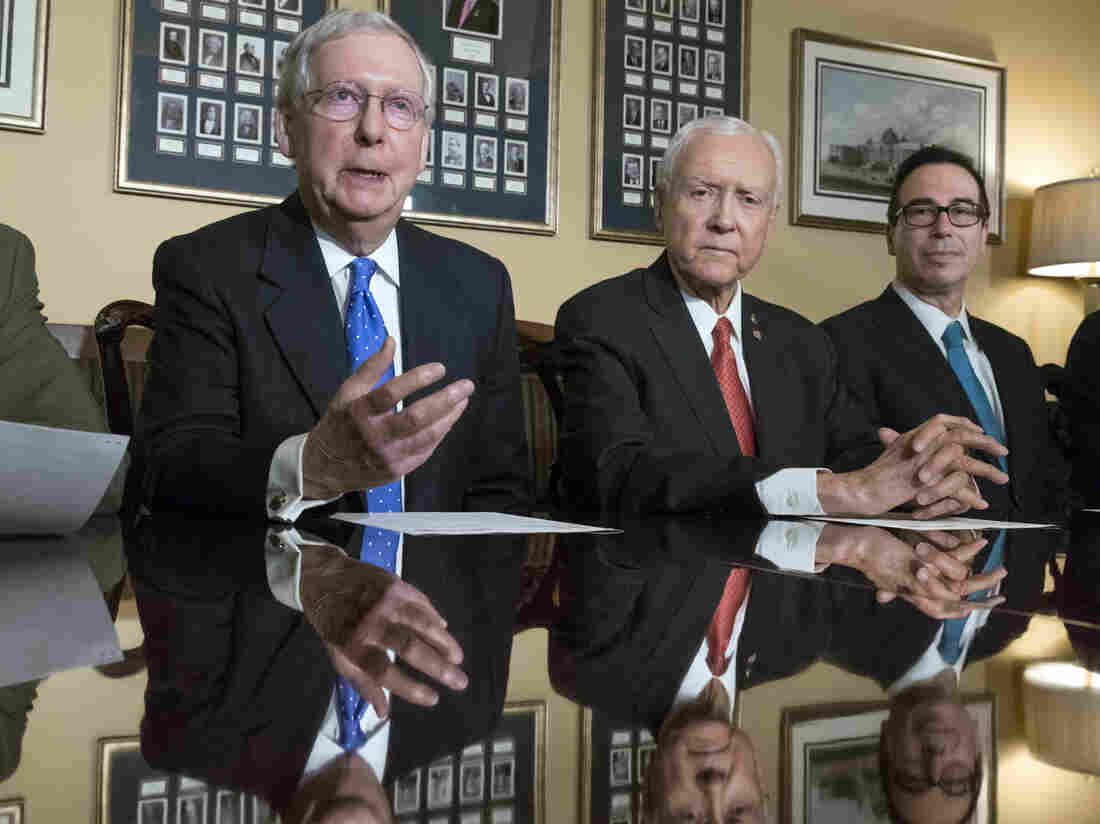 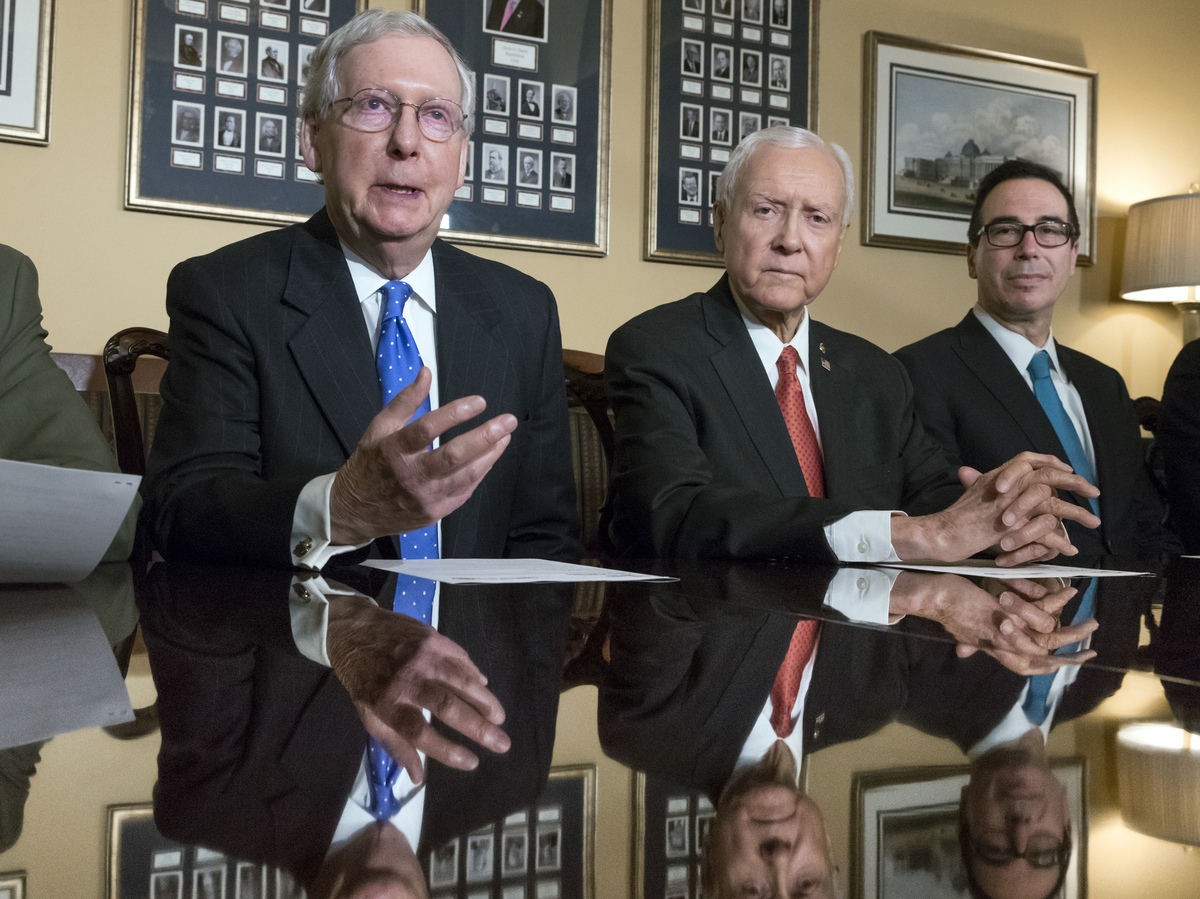 President Trump boasted earlier this month that Republicans were working together to pass sweeping tax cuts in the waning weeks of 2017.

"We're working to give the American people a giant tax cut for Christmas," Trump said. "We are giving them a big, beautiful Christmas present in the form of a tremendous tax cut."

But first, GOP lawmakers will have to resolve some major policy differences that could derail the bill.

Senate Republicans hope to hold a vote on their version of tax legislation soon after they return to Washington from a week-long Thanksgiving break. If the bill passes, the Senate plans to combine their legislation with a different tax overhaul that passed the House earlier this month.

GOP leaders say they are confident that they have the votes to meet that goal. Here are a few of the major hurdles that could get in the way of the GOP plan to keep Trump's promise for a Christmas tax break.

1. Senate Republicans can only afford to lose two votes. Republicans plan to take advantage of special Senate budget rules that allow them to pass certain tax measures with just 51 votes, rather than the 60 needed for most other legislation. That means the 52 Senate Republicans could pass a tax overhaul without the help of any Democrats.

No Democrats are expected to vote for the bill, meaning GOP leaders need to keep their party unified if they want to quickly pass the legislation.

2. Tax cuts for small businesses. Wisconsin Sen. Ron Johnson is the only Republican who has officially come out against the latest version of the tax plan. He says big corporations get the majority of benefits while small businesses get left on the sidelines. The current Senate bill would slash the top corporate rate from 35 to 20 percent and many small businesses would be able to pay at a rate of 25 percent.

Johnson says he is working on making some changes to the legislation that could eventually allow him to vote for the tax overhaul.

"In the current form, I wouldn't vote for it," Johnson said in a recent interview on CNBC's Squawk Box. "I want to get this thing fixed, and vote for pro-growth tax reform that makes all American businesses competitive globally."

3. Big tax breaks could mean big deficits. Republicans have been working around the clock to rein in the cost of cutting taxes on most individuals and businesses. The same Senate budget rules say the bill can add as much as $1.5 trillion to the deficit over a decade but some conservatives worry the true price tag could be much higher.

Sen. Bob Corker, R-Tenn., is among those who have said he won't support any tax legislation that adds to the deficit in the long-run. Corker hasn't explicitly said that he would vote against the legislation but he has not decided if he will vote for it either.

Deficit hawks have criticized the Senate legislation for disguising the long-term costs of the bill by allowing cuts on the individual side to expire in 2025. Short-term tax cuts would cost the government less in the long run, but only if they actually expire.

Republicans say they hope a future Congress will decide to keep the tax cuts in place, potentially creating a major political showdown in eight years.

4. Health care could get in the way. The Senate legislation would effectively eliminate the individual mandate requirement in the Affordable Care Act. That provision was added to the bill at Trump's request, but it could alienate some Republicans who don't want to mix health care with taxes.

Sen. Susan Collins, R-Maine, has said she doesn't think it is wise to combine taxes and health care at this time. She and other moderate Republicans worry that ending the individual mandate could drive up health insurance premiums. A recent study from the non-partisan Congressional Budget Office found that ending the requirement would result in roughly 13 million fewer people with coverage over a decade.

5. Drilling for oil in Alaska. The tax bill is full of sweeteners for individual senators, including one that would open up drilling rights in the Arctic National Wildlife Refuge in Alaska, also known as ANWR. That measure is a direct appeal to Sen. Lisa Murkowski, R-Alaska, who has been skeptical of some other measures in the bill. Murkowski has spent much of her career advocating for those drilling rights.

But other Republicans, including Arizona Sen. John McCain, worry new drilling could harm the animals and sensitive environment the refuge was intended to protect.

6. People love their favorite tax breaks. Republicans want to end, cap or change many popular write-offs that are included in the current tax code, including breaks for mortgage interest, charitable giving, student loans and taxes paid to state and local governments.

Republicans say most people won't need those deductions, thanks to lower tax rates and a plan to double the standard deduction taken by most people. But Democrats say the legislation is set up to favor big businesses with corporate rate cuts while allowing middle-class benefits to expire.