Accessibility links
'The World Goes On,' With Tiny Moments Of Joy Amid The Uncertainty Susan Sontag once called author László Krasznahorkai the "contemporary Hungarian master of apocalypse," but his new book — while disturbing — isn't as hopeless as that might lead you to think. 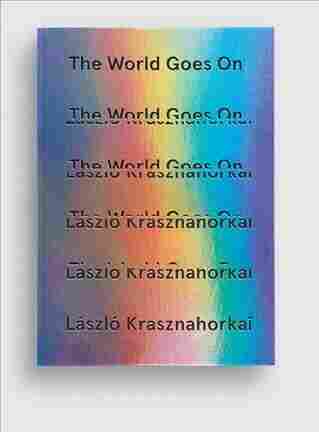 The World Goes on

International Man Booker Prize winner László Krasznahorkai's new book isn't quite as depressing or hopeless as the author's reputation might lead you to think. And Krasznahorkai does have quite the reputation — Susan Sontag once called him the "contemporary Hungarian master of apocalypse," and he's often compared to masters of grotesquery like Nikolai Gogol. But The World Goes On, while it features an array of disheartening narratives, feels more like a celebration of tiny moments of odd, inexplicable joy.

Written in 21 stories or chapters divided into three sections, it's unclear whether this is a novel or a collection, since each section's title refers to a mysterious "He" who "I. Speaks," "II. Narrates," and then "III. Bids Farewell." To tease out the differences between these sections, or to connect them to that "He," would require multiple readings and somewhat obsessive attention, which is fitting for a book — translated by Ottilie Mulzet and George Szirtes — that feels full of anxiety about big, existential questions: What is the meaning of life? Does it have meaning at all? Is it important whether it does or doesn't? And, by the way, is the world going to end?

In a piece titled "How Lovely," the narrator introduces an idea: "How lovely it would be, a world that we could end by organizing a series of lectures — anywhere in this departing world [...] where one after another, as in a circus arena, lecturers from all parts of the world would talk ..." Later in this section, an artist gives three lectures, ostensibly about melancholy, revolt and possessions, although they are, instead, rather meandering explorations of the artist's own thoughts. In the first lecture, he is speaking voluntarily; in the second, he has reluctantly accepted an invitation to return, and the door to the lecture hall is ominously locked behind him; in the third lecture, it is clear that this artist has been taken prisoner by the men in attendance, and he vows that this will be the last time he speaks to them. This odd set of lectures is perhaps the most apocalyptic the book gets, as there is a suggestion that indeed these are the end-of-the-world lectures the earlier story alludes to.

In the collection's most heartbreaking piece, "One Time on 381," we follow a child laborer working in a marble quarry. "The dust and din were the worst," we're told. "Eight hours solid in the white stone dust, when already after the first half hour this white marble dust completely coated them — not even their eyes could be made out distinctly behind the protective goggles, only the grimy circles created by constant wiping." The child puts his wheelbarrow aside and leaves the quarry, walking along the hot asphalt of Highway 381. He doesn't have an exact destination and ends up at a ruined castle. But in the end, "even through the work gloves he could still recognize his wheelbarrow among a thousand others. Yes, he could." It is clear that he will return to the familiarity of the backbreaking work and to the one possession and place he has a connection to.

Reading 'The World Goes On' is like accidentally getting on the wrong train — the writing style pulls you inexorably on, and you never quite know where you'll end up.

There is a lot of wandering in The World Goes On. Men — and they do seem to always be men — get drunk and lost, get obsessed with conspiracy theories, paint women like valleys in an attempt to return to their own homes and mothers, and almost always monologue for pages and pages in endless run-on sentences. But there are moments of light and joy within the ramblings of these apparent madmen. In "Nine Dragons Crossing," an interpreter obsessed with waterfalls experiences a strange coincidence in his hotel room that leaves him deliriously happy: "his life, too, had its own Wholeness." In "That Gagarin," an old man searching for the truth of what happened to the first human to reach space affirms, in the course of his monologue, that "we are all only made of stories." In these moments, Krasznahorkai seems to be reaching for the hope that can disrupt even the most nihilistic of narratives.

Reading The World Goes On is like accidentally getting on the wrong train — the writing style pulls you inexorably on, and you never quite know where you'll end up. Whether you want to stay on or get off remains your choice.

Ilana Masad is an Israeli-American book critic and fiction writer with work in the New York Times, the New Yorker, the Washington Post, the Los Angeles Times, and more.