Accessibility links
Two Towering Figures Collide On The World Stage In '1917' Arthur Herman's new book zooms in on Vladimir Lenin, Woodrow Wilson, and the vast, conflicting historical forces they embodied — and which came to a head in the fateful year of 1917.

Two Towering Figures Collide On The World Stage In '1917'

Two Towering Figures Collide On The World Stage In '1917' 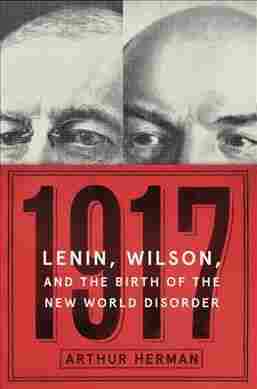 Lenin, Wilson, and the Birth of the New World Disorder

Arthur Herman is most famous for his bestselling book from 2001, How the Scots Invented the Modern World, but he's started to find a pattern in writing history based around the collision of two great figures. The Cave and the Light, published in 2014, pitted Plato against Aristotle, and his 2008 book Gandhi and Churchill was a finalist for the Pulitzer Prize in General Nonfiction for its dramatic examination of empire. Herman continues in that vein in his authoritative new book, 1917. Subtitled Lenin, Wilson, and the Birth of the New World Order, it zooms in on Vladimir Lenin, Woodrow Wilson, and how these very different leaders embodied — and clashed with – the vast historical forces that swept the globe that fateful year.

Lenin came to power in 1917, the same year Wilson began his second and final term in office. Their respective rises precipitated what would become known the Cold War, but in 1917, things weren't that cut and dried — and Herman carefully navigates the backdrop that led Russia to thrust Lenin, a rabble-rouser from a wealthy family, to the forefront of his country's Marxist uprising. He also paints a compact and compelling portrait of Wilson, the Southerner and former Princeton president who contended with race riots, Prohibition, and women's suffrage during his time in the White House, along with the sinking of the Lusitania by Germany in 1915, which eventually led the reluctant Wilson to enroll the U.S. in World War I. Still, Herman skims over certain aspects of these tribulations — including Wilson's own racism — in his wide-angle view of the big geopolitical picture.

Wisely, though, Herman doesn't dwell too long on biographies of his book's titular statesmen. He vividly illustrates his sweeping tale with anecdotes about codebreakers, intellectuals, the alleged German-American spy Robert Prager, and the looming, larger-than-life specter of Rasputin, the manipulative mystic whose insinuation into the court of Tsar Nicholas II was emblematic of the decadence and downfall of imperial Russia.

The Difficult History Behind Woodrow Wilson

Herman structures the book as a kind of timeline, punctuated regularly by headers signaling shifts in location and time. It's distracting at first, but as his story grows more complex, this tightly constructed arrangement keeps the sprawl manageable. It also heightens the narrative suspense, as scenes fly by with the pace of a thriller. Focusing on a single year, as 1917 does, runs the risk of myopia, but Herman provides concise context and backdrop as he barrels along toward the year's major developments: Wilson's declaration of war against Germany in April and Lenin's October Revolution.

That said, the book's title is a bit misleading. Herman devotes large chapters to the events of 1918 and 1919, the end and aftermath of the war. They're needed, as the interplay between two very different ideas of collectivism — Lenin's communism and Wilson's internationalism — fully flower after 1917. In Wilson's case, that culminated in his passionate support of the League of Nations, despite his inability to persuade the United States to become a member — one of the greatest failures of his life and career. Lenin and Wilson died within days of each other in 1924, a cosmic coincidence that Herman conveys in a coda packed with intriguing parallels, from the fact that both had become convalescent recluses toward the ends of their lives to the repudiation of capitalism that even Wilson had begun to express as the rising fear of immigrants, radicals, and anyone perceived to be a Communist threatened to rend the fabric of American unity.

"The world itself seems gone mad," Wilson wrote in a letter in 1914. The pacifist-leaning President was responding to the onset of the Battle of the Marne, where the Allied armies beat back a German advance near Paris. Wilson's statement was a prescient one: Soon the region became locked in trench warfare, a dehumanizing and decimating innovation that attributed to the brutal modernity of World War I — an upheaval on par with the implementation of Soviet communism. Wilson and Lenin are towering presences who form the fulcrum of Herman's account, but he also traces the intricate web of geography, ideology, and seismic sociopolitical forces around them. With clarity, crisp detail, and a firm grasp of the zeitgeist, 1917 distills that encroaching madness, keenly encapsulating a turning point in history that left the world in chaos yet poised to enter the future.