Accessibility links
Teen Angst Has A Body Count In 'I Am Not Okay With This' Sydney, the teenage protagonist of Charles Forsman's new graphic novel, has all the usual problems of her age, plus one: She's telekinetic. And it quickly becomes clear that her story is a grim one. 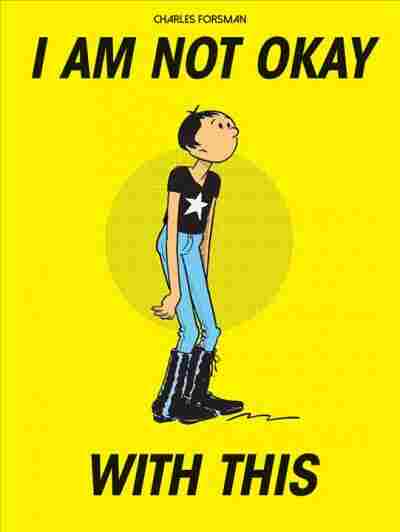 I am not okay with this

Title
I am not okay with this
Author
Charles Forsman

Sydney, the teenage protagonist of Charles Forsman's graphic novel I Am Not Okay With This, has all the usual problems of her age group — plus one. And that one problem takes this spare slice-of-life story from merely downbeat to sobering and haunting.

Besides being "ugly-skinny," having zits on her thighs ("they aren't even that fun to pop") and crushing on her best friend Dina, Sydney has telekinesis. "I can make people hurt. Like in their heads. I do it with my mind somehow," she confides. "I'm such a freak. It's no picnic ... I get all sweaty and anxious and sometimes I puke my guts out."

Sydney's power is an unassailable wall between her and other people, not least because she loses control of it when she is angry or sexually excited. Still, it seems at first like Forsman might have dreamed it up in order to play lightly with it: to suggest, perhaps, that teenagers' regular miseries aren't so serious after all. His drawings invite this assumption: Sugar-sweet and kooky in the style of the Sunday funnies, they've got same fat, friendly lines as Mort Walker strips. Sydney, on the other hand, resembles the mom from The Family Circus. When she gets nervous, she emits little rays of anxiety like in a million gag comics, and when she kisses the comely convenience store clerk, hearts fly.

But it's clear all too soon that Sydney's story will be a grim one. We learn that she used her telekinesis to kill her father — albeit at his own urging. Forsman, a two-time Ignatz Award winner, displays his singular creativity with this episode. Sydney explains that her father returned from the Iraq War with debilitating post-traumatic stress and that one night, she found him curled up, crying, on the basement floor. "He pleaded with me to make it stop. I could hear him even though his mouth wasn't moving," she says. "He was like me ... he knew I might understand and help ... I did it for him. I set him free."

This astonishing revelation comes early in the book, right on the heels of prosaic vignettes: a dinner table fight with Mom and a clumsy attempt to kiss Dina. Forsman is good at distilling such moments, but they're ultimately quite run-of-the-mill, verging on dull. The effect of mixing them with the bizarre danger Sydney embodies, though, is fascinating. Whenever Forsman depicts predictable moments of teenage angst, Sydney's power seems to lurk blackly just outside each panel. It's impossible to decide how to feel toward her or predict what her future might hold. She isn't a sociopath, like the protagonist of Forsman's 2013 book The End of the F-----g World, but she seems poised at a crossroads with one road leading to evil.

Meanwhile, though, she is also a teenage girl. She smokes pot, tries to make friends, has sex with a boy who leaves her cold, then strikes up an acquaintance with the aforementioned convenience store clerk. But when that starts to turn into something more, Sydney's power rises up, actually manifesting as a terrifying monster in one corner of her vision. With no way to be sexual with another person without endangering them, Sydney becomes absorbed in getting revenge on her friend Dina's evil boyfriend. The crossroads looms.

Sydney's final choice is abrupt and piercing — perhaps too abrupt. At first, it feels like Forsman's just run out of ideas. But his conclusion exerts a continued, nagging pressure once the book is through, hovering on the edge of your consciousness like Sydney's power-monster. It may be the only way to wind up a story that lurches so unpredictably from the ordinary to the ominous. Forsman knows that lots of teenagers imagine themselves to be figures of classic tragedy. For Sydney, it's not just imaginary.