Accessibility links
'The Disaster Artist' Is 'The Room' Where It Happened Director/star James Franco fondly — and hilariously — chronicles the making of the cult-movie fiasco The Room, evincing a deep understanding of the unhinged ambition at its core. (Go figure.) 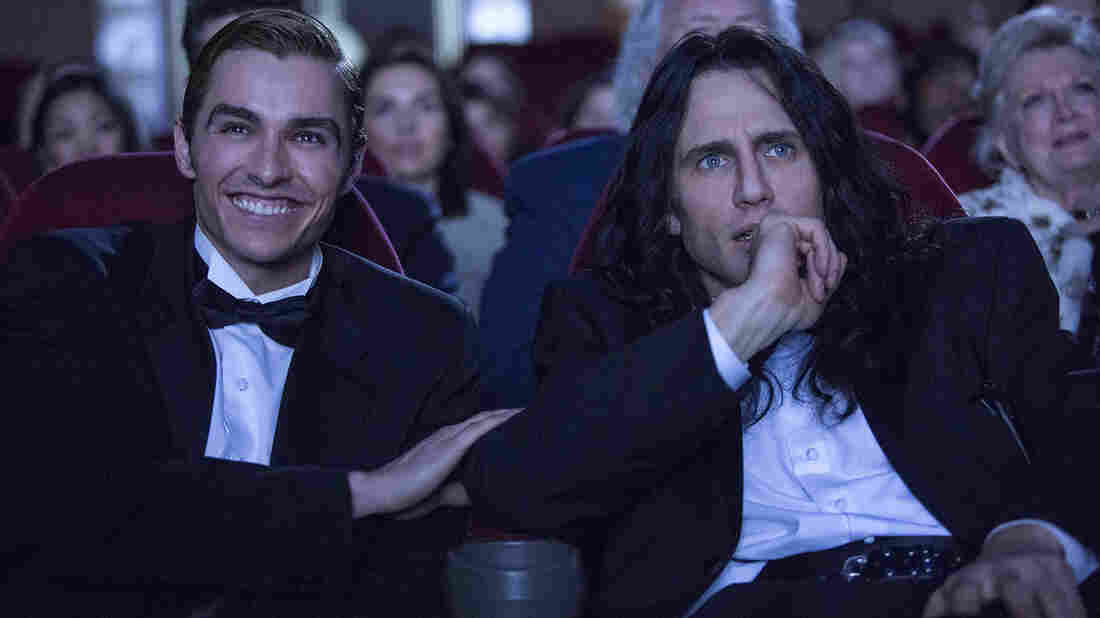 Nothing's Gonna Tear Them Apart, Lisa: Greg (Dave Franco) and Tommy (James Franco) wait for the lights to go down in The Disaster Artist. Justina Mintz/courtesy of A24 hide caption 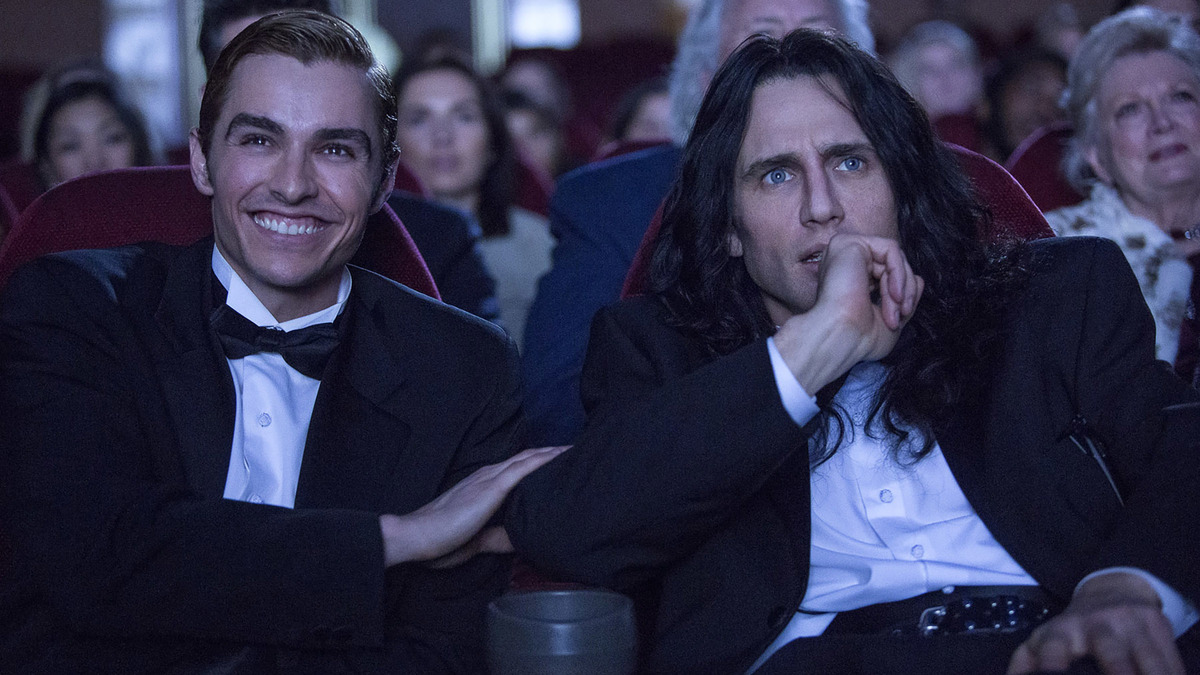 Nothing's Gonna Tear Them Apart, Lisa: Greg (Dave Franco) and Tommy (James Franco) wait for the lights to go down in The Disaster Artist.

Though Ed Wood's Plan 9 From Outer Space is commonly cited as the worst film ever made, he released a far more compelling failure three years before with Glen or Glenda, a semi-autobiographical melodrama about a cross-dresser, played by Wood under the pseudonym "Daniel Davis." Glen or Glenda has all the staggering ineptitude of Plan 9 — most memorably, Bela Lugosi's armchair commentator shouting "Pull the string!"— but it has the added benefit of being nakedly personal, a plea for tolerance from a man who has chosen to reveal a closely guarded secret on screen. Bad films are released every week, but the truly enduring ones tell us something about their creators that is utterly specific and unique.

Tommy Wiseau's 2003 opus, The Room, is a miracle of a movie, a modern-day Glen or Glenda in which the writer/director/star, so spectacularly inept in all three departments, bares his soul (and his body) for all to see. So much about Wiseau is famously murky — his country of origin, which by his accent sounds vaguely Eastern European; his age, which is surely much older than he suggests; and his seemingly bottomless source of financing — but The Room is a tale of heartbreak and betrayal that is defined by an almost childlike simplicity. Wiseau's understanding of human relationships may be hilariously alien, but his emotions are raw and unfiltered.

The cult of The Room started in Los Angeles over a decade ago, built on word-of-mouth and a curious promotional billboard, and it has since become a 21st century Rocky Horror Picture Show, with audiences yelling canned one-liners at the screen and lobbing footballs and plastic spoons. In 2013, Wiseau's co-star and partner-in-crime, Greg Sestero, teamed up with author Tom Bissell to publish The Disaster Artist, a wildly entertaining book that deserves shelf space alongside other classics of the movie-fiasco genre like Steven Bach's Final Cut (about Heaven's Gate) and Julie Salamon's The Devil's Candy (about The Bonfire of the Vanities). It turns out the behind-the-scenes story is every bit as stupefying as film itself.

With his winning adaptation of The Disaster Artist, director/star James Franco follows the model of Tim Burton's biopic Ed Wood, approaching Wiseau with a delicate balance of affectionate mockery and a heartfelt appreciation for his creative passion. It would be unforgivably mean-spirited for Franco merely to point and laugh, so instead he casts Wiseau as a Hollywood outsider who chose to defy the gatekeepers and pursue his cinematic dreams on his own dime. That may be the path of least resistance, given the darker corners of Wiseau's biography and the gross misogyny at the core of The Room, but it's also the most gratifying, because it so firmly embraces the cult that's rallied around Wiseau and his peculiar DIY triumph.

Before the cameras start to roll, however, The Disaster Artist begins with the friendship between Wiseau (James Franco) and Sestero (Dave Franco), two Hollywood nobodies who meet at an acting class and wind up making history together. In Sestero's telling, he is the passenger in a car that is careening down Sunset Boulevard, a passive accomplice to the runaway ambitions of a man who wants to be the next James Dean or Marlon Brando and has the money to make it happen. When Wiseau hacks out a script for The Room, Sestero recognizes it as a nonsensical, subliterate bafflement, but Wiseau's mysterious millions will the production into existence anyway and movie anti-magic commences.

In the book and in the film, there's something naggingly inauthentic about Sestero's friendship with Wiseau: He presents himself as an insider while also keeping his distance, in case anyone might associate him with historic failure. But The Disaster Artist is comedy gold once Wiseau starts making The Room in earnest and Franco re-creates every misstep with the scrupulousness of a medieval monk transcribing religious text. There are production follies, like Wiseau shooting on digital and film simultaneously or using green screens of a balcony rather than the real thing, and there are multiple takes of treasured moments, culminating in the immortal "You're tearing me apart, Lisa!"

The Disaster Artist eases into the uncomfortable nature of a so-bad-it's-good phenomenon like The Room, when audiences turn out to hoot at a film that its creator intended to move them. The real-life Wiseau has been steering into that curve for years — he even tried to promote it as a "black comedy"— but the film does well to register the sting of failure while celebrating the creative spirit that drove him to realize his ambitions. As someone who has attached his name to plenty of ill-conceived enterprises himself recently — he adapted unadaptable William Faulkner and Cormac McCarthy novels in the same year! — Franco understands the perils of the profession. In that respect, Wiseau isn't a case study. He's a kindred spirit.