Accessibility links
Michael Flynn Pleads Guilty To Lying To FBI The former national security adviser is becoming a central figure in the special counsel's probe of Russian election interference and any possible connections between Russia and the Trump campaign. 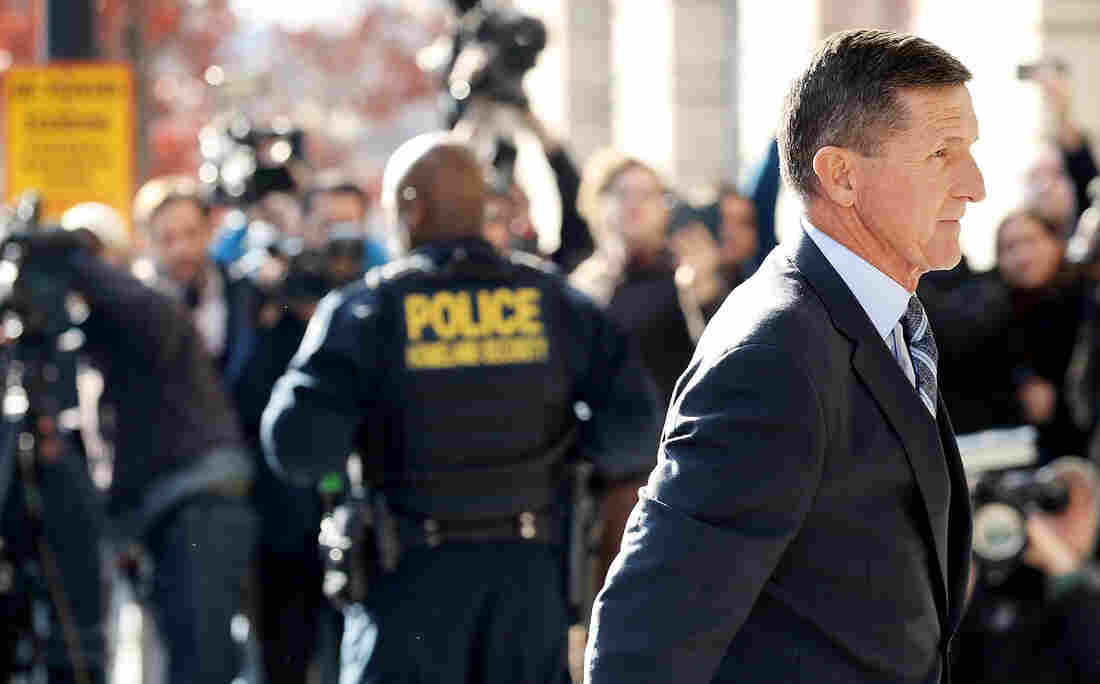 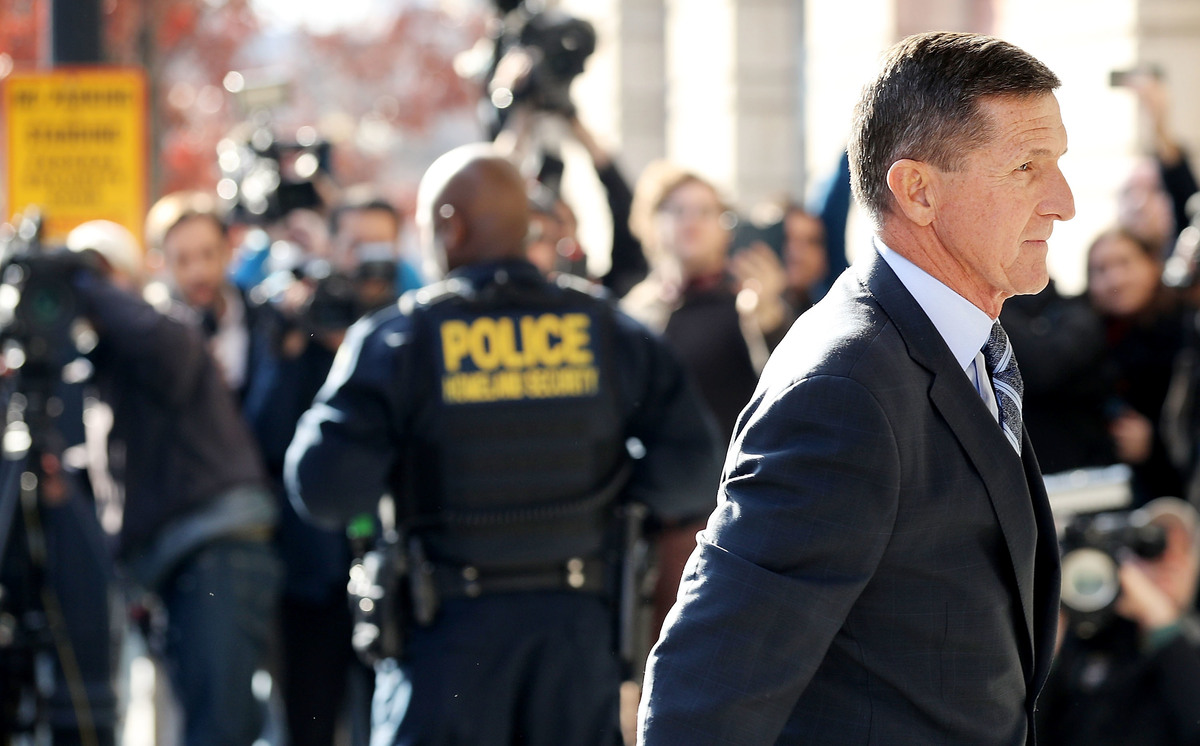 President Trump's first national security adviser, Michael Flynn, pleaded guilty Friday to lying to the FBI about his contacts with the Russian ambassador during the transition, and he is cooperating with the special counsel's investigation into Moscow's interference in last year's election.

Flynn told investigators that he was instructed to engage with the Russians by senior members of the Trump transition team.

The plea agreement marks a major development in special counsel Robert Mueller's probe — Flynn is the first former senior official from the Trump White House to face charges. It also suggests that Flynn has information that may take investigators to the core question of their inquiry: possible coordination between the Trump campaign and Russia.

Speaking Saturday morning before departing for New York City, President Trump again denied any coordination between Russia and his campaign. "What has been shown is no collusion, no collusion. There's been absolutely no collusion, so we're very happy," Trump said when asked about Flynn's guilty plea, according to a pool report.

Flynn, a retired lieutenant general who emerged as a top Trump adviser during the 2016 presidential race, entered his guilty plea during a hearing Friday morning in federal court in Washington, D.C. Leaving the courthouse after about an hour, Flynn stepped into a waiting black SUV and did not answer questions shouted at him by journalists gathered on the sidewalk outside.

But in a statement sent by his lawyers, Flynn admitted that he has made mistakes.

"I recognize that the actions I acknowledged in court today were wrong, and, through my faith in God, I am working to set things right," he said. "My guilty plea and agreement to cooperate with the Special Counsel's Office reflect a decision I made in the best interests of my family and of our country. I accept full responsibility for my actions."

The single count relates to Flynn's discussions in late 2016 — during the transition period between Trump's victory on Election Day and his inauguration in late January — with the Russian ambassador to the U.S. about sanctions the Obama administration had just imposed on Russia and about a U.N. Security Council resolution, according to court papers filed by the special counsel.

Flynn first consulted with a "senior official of the Presidential Transition Team," who was with other transition members at Trump's Mar-a-Lago resort in Florida, on what to tell the ambassador about American sanctions.

Speaking later that day with Kislyak, Flynn requested that Russia not retaliate against the punitive measures just imposed by the U.S., the court papers say. Flynn then called the transition official to report on his discussion. The following day, Russia announced that it would not take retaliatory measures against the U.S.

Top Trump aides Stephen Miller, K.T. McFarland, Kellyanne Conway, Steve Bannon and Reince Priebus were all at Mar-a-Lago with then-President-elect Trump on Dec. 29, 2016, according to a pool report by a journalist assigned to cover Trump and the transition team on that day.

Flynn also engaged in a similar back-and-forth with the Russian ambassador over a U.N. Security Council vote on a resolution condemning Israeli settlements in the occupied West Bank and East Jerusalem. The incoming Trump administration opposed the resolution, and Flynn asked the Russian envoy to either oppose the measure or delay it. Flynn was directed by a "very senior member" of the transition team to make the request, court papers say.

Media reports have suggested that "very senior" transition official is Jared Kushner. A person familiar with the Trump transition efforts denies that Kushner "directed" Flynn to contact officials from Russia and other foreign governments to find out their stance on the resolution.

"The U.N. effort was well-known and a collaborative effort by Reince Priebus, Steve Bannon, General Flynn and Jared Kushner," the source told NPR. "None of them 'ordered' or 'directed' the others and all were working towards the same goal."

Flynn resigned from his White House post under pressure in February after allegations that he discussed sanctions with the Russian ambassador, then misled Vice President Pence about the conversations.

"Throughout my over thirty three years of honorable military service, and my tenure as the National Security Advisor, I have always performed my duties with the utmost of integrity and honesty to those I have served, to include the President of the United States," Flynn wrote in his resignation letter.

After Flynn's departure, he went out of his way to express loyalty to the president and he told acquaintances he was still in touch with Trump, who urged him to "stay strong," according to a Yahoo News report.

Cobb said that Flynn's false statements "mirror" those he made to White House officials, which resulted in his resignation in February.

But Flynn's plea agreement and cooperation with Mueller would seem to signal the opposite — that the investigation has now reached into the Trump White House itself, and that it still has a long way to go before wrapping up.

Flynn was a trusted adviser who worked closely with other campaign officials, many of whom are now senior administration officials.

Flynn has long been known to face legal troubles over a range of issues.

Former acting Attorney General Sally Yates, an Obama administration holdover, testified under oath on Capitol Hill that she had warned the White House counsel about Flynn before her firing in January, but that he seemed to play down the significance of her warning.

Flynn also took the step of filing documents with the Justice Department under the Foreign Agents Registration Act, or FARA, for his lucrative lobbying work on behalf of Turkey in 2016, a period that overlapped with the presidential campaign. Criminal enforcement of the FARA has been spotty, with only seven cases since 1966.

But failure to register under the law formed the basis of criminal charges against Paul Manafort, Trump's former campaign chairman, and Manafort's deputy, Richard Gates, in late October.

As investigations into Russian election interference began to intensify this year, Flynn offered to testify to congressional committees — if he could receive immunity in exchange for his remarks. "Gen. Flynn certainly has a story to tell, and he very much wants to tell it, should the circumstances permit," his lawyer Robert Kelner said at the time.

More recently, Flynn's son, Michael G. Flynn, who worked alongside his father at the Flynn Intel Group, has come under scrutiny from congressional investigators and the special counsel.

Several veteran lawyers on the special counsel team have a history of approaching lower-level figures, including relatives of their targets, to build bigger cases against corporate executives or mob figures.

After prosecutors unveiled charges against Manafort and Gates on Oct. 30, the White House distanced itself from them, pointing out that the bulk of their alleged offenses predated the presidential campaign.

But putting distance between Trump and Flynn may be more of a challenge, as the president repeatedly praised Flynn for his service and loyalty, even after he left the White House this year.