Accessibility links
'Dawn Of The New Everything' Argues For Human-Centered Technology Virtual reality pioneer Jaron Lanier's book is part memoir, part history of the development of VR, and an unexpected but welcome comparison of the promises of VR with those of artificial intelligence.

'Dawn Of The New Everything' Argues For Human-Centered Technology

'Dawn Of The New Everything' Argues For Human-Centered Technology 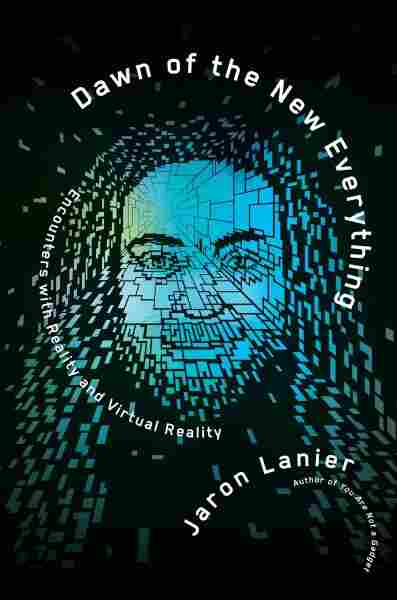 Dawn of the New Everything

Encounters With Reality and Virtual Reality

With virtual reality rigs like the Oculus finally finding their way into people's homes, it's a perfect time to look back on the birth of a technology that almost didn't exist. Dawn of the New Everything is techie guru Jaron Lanier's attempt to explain the origins of VR, both technically and philosophically. He's the perfect person to tell this story, too: Lanier founded a company called VPL Research in the 1980s that sold the first VR development kits to scientists, government contractors, and Hollywood studios.

Lanier became so famous for his VR work that he even inspired even a cheesy 1990s science fiction movie — Lawnmower Man, which features VPL technology and lots of really awful CGI cybersex. In Dawn of the New Everything, which is part-memoir, part-manifesto, Lanier takes us back to the early days of personal computing, when almost anything seemed possible.

Growing up in a geodesic dome that he designed with his father in the New Mexico desert, Lanier was obsessed early on with avant-garde music and the imaginary worlds of Hieronymus Bosch. After dropping out of high school at 14, he dabbled in computer science classes at a local college, raised goats, played music, and eventually went to art school in New York. After he followed a girlfriend to California, he finally figured out he could make money by programming computers.

The book careens between weird, half-remembered interludes (Lanier confesses that his memory often plays tricks on him), and serious discussions of VR technology. In a fascinating section about early VR tech, he explains that the VPL coders had to develop a virtual glove — eventually called the PowerGlove — long before they had a headset. Getting the movements of a person's hand to translate to movements inside a graphical world on screen was an incredibly hard problem, especially when the hand had to interact with virtual objects.

Dawn of the New Everything is at its best when Lanier shares experiences that only a lifelong VR hacker could have. At one point, the VPL team uncovers a bug where people's hands grew to the size of buildings in a virtual cityscape. This lead to some of Lanier's more interesting discoveries, such as how easy it is for people to adapt to all kinds of body sizes and shapes in VR, including (memorably) lobster bodies. He speculates that our brains are a lot more plastic than we realize, and will quickly adjust to accommodate the new perceptions afforded by virtual worlds.

There are some unfortunate moments too — Lanier shares a few too many unflattering details about his ex-wife. Perhaps the most cringe-inducing passage is when he tries to explain why he never hired any women to work at his company: He wanted to hire them, he claims, but there just weren't any coming out of math and computer science departments. This is an especially frustrating assertion after he's just spent 100 pages describing how his own education involved learning about electronics from a guy he met at Radio Shack, then going to art school.

If you're willing to set these moments of cluelessness aside, there's a lot to learn here. Lanier's overarching argument winds up going in an unexpected but welcome direction when he pits the promises of VR against those of artificial intelligence.

Lanier's overarching argument winds up going in an unexpected but welcome direction when he pits the promises of VR against those of artificial intelligence.

For Lanier, VR is the ultimate human-centric technology. All of its hardware is geared toward making a technological world that a human can easily understand and navigate. Using VR, people can visualize things that are nearly impossible to put into words, whether that's a delicate surgical procedure, or the way all the pieces of a computer network fit together. If humans can't understand or perceive what's happening in VR, the tech is a failure.

AI, on the other hand, attempts to replace humans with algorithms we can't see and barely understand. We use algorithms to find the most relevant information online, to make decisions about what we want to watch on TV, and even to help us separate real news from fake. These are all tasks that Lanier believes should be in human hands. Technology, he tells us over and over again, should be a tool. It should give us a clearer picture of the world, so we make our own decisions. Creating an AI god to make those decisions for us is the first step toward authoritarianism.

In the end, Dawn of the New Everything isn't really about VR; it's about what we do next, as the future of technology unfolds. Lanier wants us to embrace machines that are made for humans, rather than for a world without us.

Annalee Newitz is the author of the novel Autonomous, and the nonfiction book Scatter, Adapt, and Remember: How Humans Will Survive a Mass Extinction.