Accessibility links
Emily Wilson's 'Odyssey' Scrapes The Barnacles Off Homer's Hull Wilson — the first woman to translate The Odyssey — has created a fresh, authoritative and slyly humorous version of Homer's epic that scours away archaisms while preserving nuance and complexity. 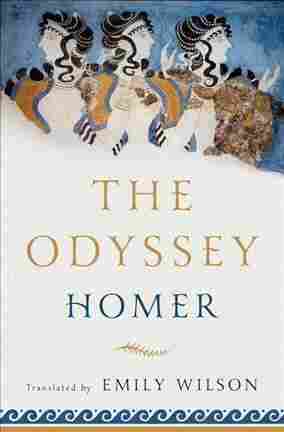 In the 17th century, the poet John Dryden satirized the deep anxiety around letting women learn the Classics:

But of all Plagues, the greatest is untold;

The Book-Learn'd Wife in Greek and Latin bold.

The Critick-Dame, who at her Table sits:

Homer and Virgil quotes, and weighs their Wits;

Alas! We Critick-Dames abound. But we were a long time coming. Because the classics were so closely associated with elite institutions, they came to symbolize a certain kind of cultural and political power, a power men were loath to give up. Besides, the gospels were in Greek. Homer was in Greek. Would it be wise to let women have unmediated access to so much wisdom all at once? Who knows what seditious secondary readings they might attempt?

"'I dare say, if I could read the original Greek, I should find that many of the words have been wrongly translated, perhaps misapprehended altogether," says Caroline Helstone in Charlotte Bronte's novel Shirley, after being scolded with a passage from the New Testament, "It would be possible, I doubt not, with a little ingenuity, to give the passage quite a contrary turn; to make it say, "Let the woman speak out whenever she sees fit to make an objection."

It's hard to believe now, but women learning the classics was a genuine threat to male power. Against this long background of misogyny and fear, it is surprising, but not astonishing, that the first English translation of the Odyssey by a woman has only now come out.

Classicist Emily Wilson's brisk and understated new version sweeps away much of the nostalgic detritus from the story of Odysseus's wandering way home after the Trojan war. The original poem was not written, but oral, probably composed by many different poets, who passed it down performance by performance. Wilson's metre — friendly iambic pentameter — helps retain that storytelling feel. Without contortions, the lines run quickly, better allowing for drama and suspense. Here, Odysseus surveys the banquet hall after he has slaughtered his wife's suitors:

Odysseus scanned his property for survivors

He saw them fallen, all of them, so many,

lying in blood and dust, like fish hauled up

out of the dark-gray sea in fine-mesh nets.

All tipped out on the curving beach's sand

They gasp for water from the salty sea.

The sun shines down and takes their life away.

So lay the suitors, piled up on each other.

Wilson dispenses gracefully with unnecessary archaisms and flourishes. If you read enough classics in translation, you may come away with the vague idea that much of the Greek literary canon took place in some idyllic part of pre-contemporary England, what with the harks and hails, thous and thees, woes and alases, fair maids and noble lords, and the puzzling fact that everyone's first initial seems to be O.

Wilson's project is basically a progressive one: to scrape away all the centuries of verbal and ideological buildup — the Christianizing (Homer predates Christianity), the nostalgia, the added sexism (the epics are sexist enough as they are), and the Victorian euphemisms — to reveal something fresh and clean. Why call them "handmaidens" when they were slaves? Why insist, as so many translators do, on 19th-century diction when that time had no more in common with Homer's than ours?

Though it's silly to ascribe too much to her gender rather than her skill, Wilson does have a certain double sensibility that often translates male grandeur with a female half-smile. The first book opens, "Tell me about a complicated man." Complicated is her translation for the Greek word polytropos — literally, "of many turns." Complicated means something folded together, something intricate, and layered, so it suits the meaning beautifully. But it also carries the faintest of eyerolls — he's complicated.

Wilson's flashes of humor feel like meeting the eye of a friend over some very distinguished speaker who has droned on a little long.

Wilson's flashes of humor feel like meeting the eye of a friend over some very distinguished speaker who has droned on a little long. Take a scene from the final book, in which Odysseus and his son are engaging in some pre-battle bravado. In E.V. Rieu's translation, Odysseus's father exclaims, "What a day this is to warm my heart! My son and grandson competing in valor!" Compare Wilson's quietly cutting lines: "Laertes, thrilled, cried out, 'Ah, gods!/A happy day for me! My son and grandson/are arguing about how tough they are!'" Is she changing the tone? Perhaps. Or just giving Homer credit for having a sense of humor.

Wilson's nuance suits Homer's tricksy, layered tale of Odysseus' voyage, which is told in nested stories that often contradict each other, and is accompanied by the fantastic lies he tells his hosts as he is washed from island to island. Matthew Arnold famously called Homer "eminently plain." But if you let them, as Wilson does, the complexities can bloom.

Bronte's heroine would be disappointed to find out that, even in a woman's translation, the men of the Odyssey still tell the women to go upstairs and be quiet. But she was right about something: the rebellious and wild potential of translation. In all its morphing and slippery layers, its winks and double meanings, Wilson's Odyssey contains a laughing, democratic undercurrent. And it belongs there. "Homer," after all, was multitudes.