Accessibility links
The Resilient Voice Of Victoria Williams After a fast rise to near-fame, a multiple sclerosis diagnosis nearly ruined her career — before a helping hand came in the form of some of the country's most-famed bands. 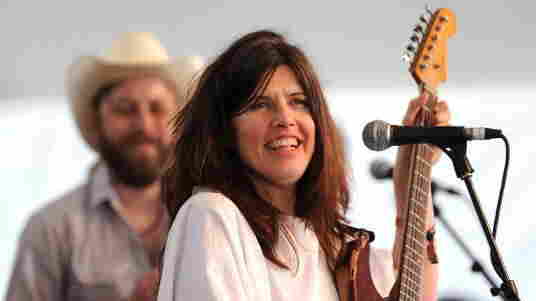 Victoria Williams performs during Stagecoach: California's Country Music Festival in 2010. The singer continues to make music despite being diagnosed with MS more than 20 years ago. Michael Buckner/Getty Images hide caption

Victoria Williams has one of the most distinctive voices in American rock. She's also one of its most unusual lyricists.

The singer can't remember a time when she didn't sing.

"I kind of unconsciously sang before I'd go to bed. I would be singing to where my brother would knock on the wall and say, 'Shut up,'" Williams tells NPR's Alex Cohen.

Eventually, she grew a bit more conscious of her talent and started performing with local bands around her hometown of Forbing, Louisiana. But Williams never really thought of it as a career — until one night, when she played at a gig at a deer camp for a gathering of hunters.

"The band went on break and I went and I sang a song," says Williams. "And this hunter came up and he says, 'I'll give you a hundred dollars if you sing another song.'"

Soon after, Williams began writing songs like "Happy Come Home," a tune inspired by one of her neighbors who lost her dog.

"It touches me because of the lyric, 'Happy come home.' Maybe it's not even a dog... maybe it's just happiness," says Williams.

From there, Williams built a loyal following on simple songs that strike a deeper chord.

"To me, empathy is the main instrument of our very existence... The ordinary human condition in all of its comedy and tragedy — and she had all of that in a pronounced way," says pianist and composer Van Dyke Parks, who has worked with such notable artists as The Beach Boys, U2 and Skrillex and arranged Williams' 1987 debut album.

That album caught the attention of the famed filmmaker D. A. Pennebaker, who had already made documentaries about Bob Dylan and the epochal Monterey Pop Festival. Pennebaker shot a short film about Williams and her music.

By 1993, she had earned a coveted spot as the opening act for Neil Young. At first, the tour was going great — until her career almost came to an end.

"I was like on the 23rd show," says Williams. "All of a sudden my hands were numb and I couldn't play the guitar, so I'm just standing there sitting and singing a capella. So his manager said, 'You've got to go to the hospital and figure out what's wrong with you.'"

Williams was eventually diagnosed with multiple sclerosis, a degenerative disease of the central nervous system. She had to stop performing to regain her health and, before long, the singer was overwhelmed by medical bills. Luckily, Williams had earned some fans through an appearance years before on a cable access show in New York City.

"I was mesmerized," says Sylvia Reed, second wife of the late Lou Reed. "Her voice and the song, the lyrics were amazing. And I called Lou over and said 'Look at this, look at this...'"

The couple wound up befriending Williams and when the singer fell ill. "We felt this immediate need to help her...and I think a lot of people felt that way."

Reed says it wasn't too hard to get some people to record Williams' songs for a benefit album Reed helped organize, Sweet Relief: A Benefit for Victoria Williams featured a dozen artists including Pearl Jam, Lucinda Williams, and Reed's husband. Victoria Williams says she'll never forget the first time she heard it.

"I was in Louisiana and I was down on this long road and lots of trees. I was just listening to it and just crying, crying out of joy."

Sweet Relief helped bring Williams' music to a much wider audience and raised so much money she wound up with a surplus. She used it to establish a foundation for other musicians struggling with medical costs.

With her health back on track, Victoria Williams hit the road again in 1995. A fan recorded one of her New York shows and posted the audio to YouTube nearly 20 years later.

Now, Williams' record label has released it, although Williams says she barely remembers this show.

These days, she lives in Joshua Tree, California, where she still struggles with MS – there is no cure, but her Sweet Relief Foundation is still in operation, helping other musicians. Williams has been well enough to work on new material with the help of a Chinese zither she discovered in a music store.

"I think it's kind of gone back to what it was at the very, very beginning of singing. Singing words that I don't know what they mean. It's like singing in tongues," she says.

Victoria Williams hopes to release a record of these songs. It would be her first album of new material in more than 15 years.