Accessibility links
Girl Meets Frog Monster In 'Mrs. Caliban' This season's secret weapon in literary banter will be Mrs. Caliban, a peculiar, wonderful, overlooked 1983 novella by Rachel Ingalls, about a housewife whose life is upended by a suave frog monster. 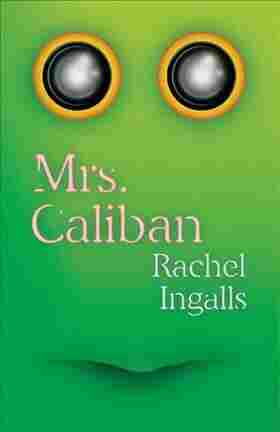 by Rachel Ingalls and Rivka Galchen

This season's secret weapon in literary cocktail banter will be Mrs. Caliban, a peculiar but wonderful and long-overlooked novella by Rachel Ingalls. Originally published in 1983 and seemingly doomed to a dead end ride on the oblivion express, Mrs. Caliban was briefly rescued by an unlikely deus ex machina: The British Book Marketing Council, which in 1986 named it "one of the 20 greatest American novels since World War II." Its 15 minutes in the public eye ended quickly enough, and this strange, unlikely fable once again sank into obscurity.

Personally, I'm a sucker for any kind of literary archaeology that unearths classics from the past. Mrs. Caliban is being reissued, a timely resurrection in this gender-mesmerized time, given the author's proto-feminist take on life. Praise from heavy-hitters such as Ursula K. Le Guin, Joyce Carol Oates, and Eleanor Catton may help this thrice-born baby to survive and thrive.

Mrs. Caliban takes its name from the "mooncalf" in Shakespeare's The Tempest, "not honored with a human shape." Ingalls gives us an odd parable of a story, totally fantastic but relayed in a matter-of-fact manner, "drolly casual," as John Updike described it in the single critical notice the book received upon its initial publication. The tone recalls Richard Matheson's genre classic, I Am Legend, in which vampires lurk as neighbors in a ragingly nondescript southern California suburb. Dorothy Caliban, too, is a suburban matron of the nondescript variety, living in a neat house on a quiet street, lost and purposeless, stuck in a bad marriage to an unfaithful businessman.

Then, abruptly, life changes: "And she was halfway across the checked linoleum floor of her nice safe kitchen, when the screen door opened and a gigantic six-foot-seven-inch frog-like creature shouldered its way into the house and stood stock-still in front of her, crouching slightly, and staring straight at her face."

Ingalls assigns the amphibian home invader a drolly casual name, Larry. His most dominant quality, though, is not a moistness of skin, or a "not easy being green" attitude. It's a slinky, potent, quite unexpected sex appeal. The princess kisses him, he remains a frog — a hot frog, but a frog nonetheless. And through the monster's tender graces, she gets a thrilling respite from her ceaseless vacuuming, cooking, bed making, and dishwashing. So what if her liberation arrives on webbed feet?

Love affairs with creatures from black lagoons might be having a moment; Guillermo del Toro's film The Shape of Water features a very Larry-like green-scaled research subject paired with a mute lab worker. Larry and Dorothy gallivant under the cover of night, through lush flower gardens and by the moonlit ocean. She gives him driving lessons. Unbeknownst to hubby, Dorothy invites her new guest to live in a little-used room off the kitchen, to which they furtively repair for a little inter-species nookie. Life is sweet.

A fly in the ointment: Larry is wanted for murder. His real name comes through on the Caliban household's old-fashioned radio, which issues news alerts about "Aquarius the Monsterman." The Monsterman has killed two scientists in his escape from the Institute for Oceanographic Research. Dorothy's way of coping with Larry's potential for violence forms the fundamental conundrum of Mrs. Caliban, which, sexual politics aside, is in many ways deftly light and humorous.

Ingalls has an oddball, off-center vision, replete with sharply observed glimpses of the surreal in ordinary life.

"I don't know how I could bear to give you up now," Dorothy tells Larry. "Now that you've come, everything's all right." The ever-efficient housewife buys a hat, gloves and makeup so that her escapee can avoid capture, but remains worried that the world is not yet quite ready for the age of Aquarius. "Still," says Dorothy, "people would notice a man with a green head. I guess I should get you a wig." "Good. I think I'll try a different colour every night," Larry shoots back.

At 111 pages, Mrs. Caliban is a swift read. The author has written other novellas as well. "I write because it is a compulsion," she has said. Ingalls has an oddball, off-center vision, replete with sharply observed glimpses of the surreal in ordinary life. She describes a woman handing out free samples in a grocery store: "They were comparing recipes for meat sauce when a figure like a huge doll came trotting down the aisles. It was female, dressed in a sort of drum majorette's outfit ..." In a world where women walk abroad as dolls, I can well understand how Dorothy would want to smash the patriarchy and take up with Godzilla.