Accessibility links
In 'Hiddensee,' Gregory Maguire Gets Under The Shell Of 'The Nutcracker' Author Gregory Maguire made his name rewriting fairy tales. Now, he's taken on The Nutcracker — a beloved holiday classic, yes, but one that Maguire says makes no sense as it's usually performed. 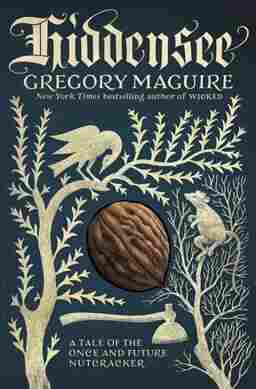 A Tale of the Once and Future Nutcracker

It's that time of year — Sugar Plum fairies dancing in delight, the Mouse King, a gorgeous Christmas party, a prince, and that instantly recognizable music.

The Nutcracker ballet is a beloved holiday perennial, but Wicked author Gregory Maguire's new novel Hiddensee — which is based on the Nutcracker tale — is not exactly meant for the kiddos. It tells the backstory of the powerful toymaker, Herr Drosselmeier, who gives the Nutcracker to Clara.

"Like most Americans, maybe people around the world, I saw the ballet," Maguire says. "And one of the things that captivated me about it was that scene where the Christmas tree grows 40,50, 60 feet high, and that seemed to be one of the most magical transformations I have ever seen on the stage, even if the rest of the story seemed to me demented."

On why he thinks it's "demented"

It's crazy! It's broken! It doesn't make any sense. Act I is the traditional tale, that you might find in Grimm, with the small powerless Clara fighting the great King of the Mice, and that makes sense and is dramatically strong, and we're rooting for the small girl, and all that is great. Then, Act II comes — the most gorgeous ballet music in the world, but it's as if we're sitting in an overstuffed living room looking at the photographs of our grandparents' trip around the world. It has nothing to do with the great drama of Act I; it's all squandered. And I wanted to know what I could do with this story to make the two parts speak to each other.

On his take on Drosselmeier

Dirk Drosselmeier is a foundling, or that's what he's told, and he lives in the Bavarian forest. He's born about 1800 or so, so he's about 8 years old in 1808. Now you may know that at just about this time, the Grimm brothers were combing the woods of Bavaria and Baden, looking for those stories that would really cement German romanticism and the German romantic fairy tale in our minds for the next 200-some years. So, Dirk Drosselmeier is born right at the heart of the German fairy tale, in a sense, and I decided to take his life story, as a small poor boy in the back woods, as it were, of Europe, and see how he grows up to be able to enter the salons of Munich, and to be the one person who can stand between the little girl and the great darkness threatening her on Christmas Eve.

I wanted to know what I could do with this story to make the two parts speak to each other.

The real world is hard and dark ... we seem to need both to stare with unblinking eyes at the reality of the hard world in which we live, and we also seem to need the comfort of those tales that we got when we were children that said if we fight hard enough and if we endure, we just might survive. If we remember the magic of our childhoods, we might be able to find in that the strength to carry on in our own hard and difficult adult lives.

I like a quote by Roger Scruton, a British moral philosopher, which says "the consolation of the imaginary is not imaginary consolation." And so when I ask myself, well, why am I not in public policy, why am I not a brain surgeon, why am I writing fairy tales for adults? I remember that giving people consolation through the literary arts is indeed a grown-up job, and that's what I try to do.

This story was produced for radio by Barrie Hardymon and Chad Campbell, and adapted for the web by Petra Mayer.