Accessibility links
Alabamians Fear Roy Moore Is Bad For Business The state has long sought to make itself a destination for businesses to invest in. But the current special Senate election may make investors reluctant to come to Alabama. 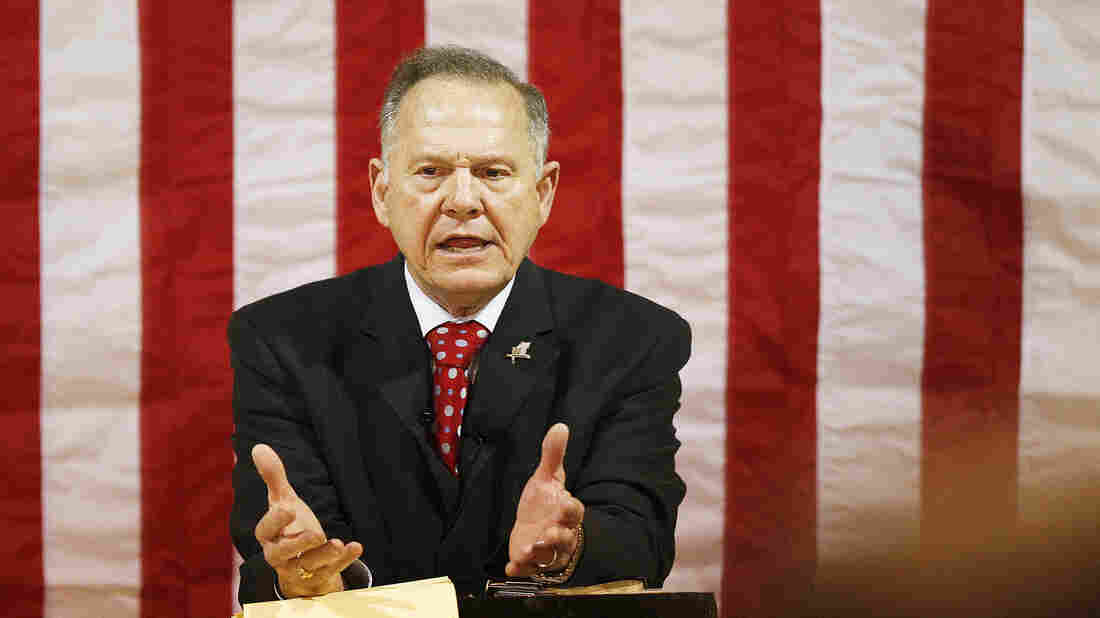 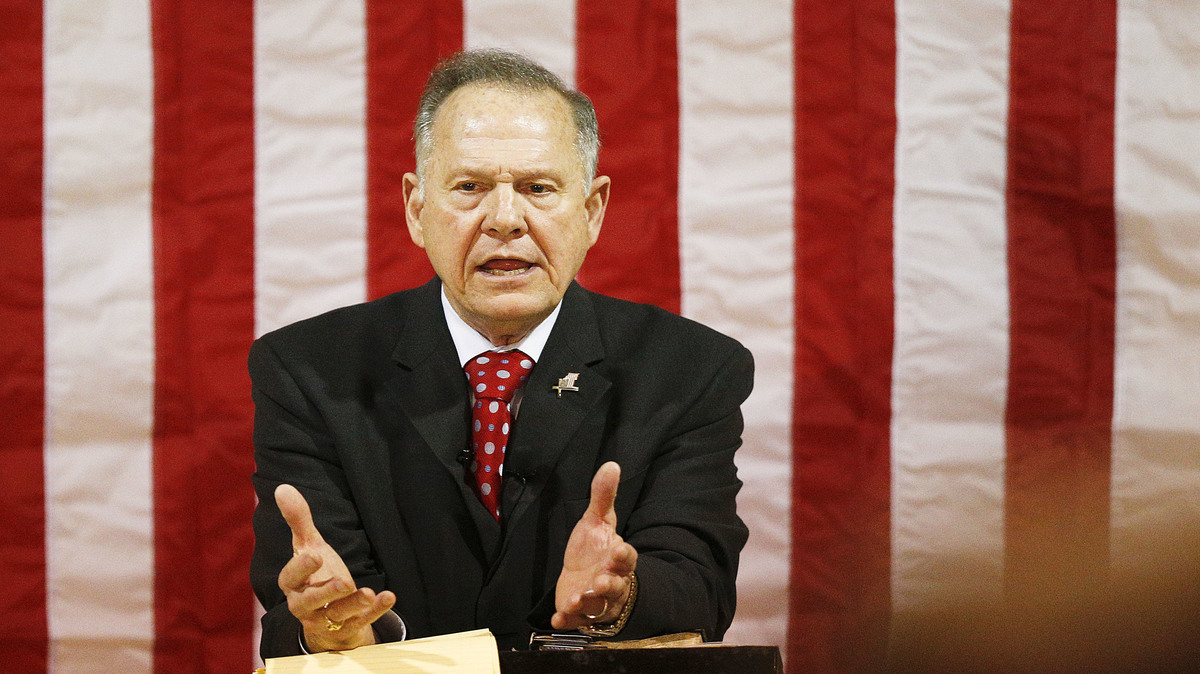 Back in September, then-Birmingham, Ala., Mayor William Bell and other elected officials stood before the media in a downtown park.

"I know everyone's gotten a lot of call[s] about this box in the background," Bell told them.

The box towering over them is made up like a package from Amazon. It was part of Birmingham's campaign to land Amazon's proposed second headquarters.

The city might be a long shot, but the state has landed many big names in the automotive industry and advanced manufacturing including Mercedes, Honda and Airbus. State economic development leaders promote Alabama as a low-tax state with a low cost of living. 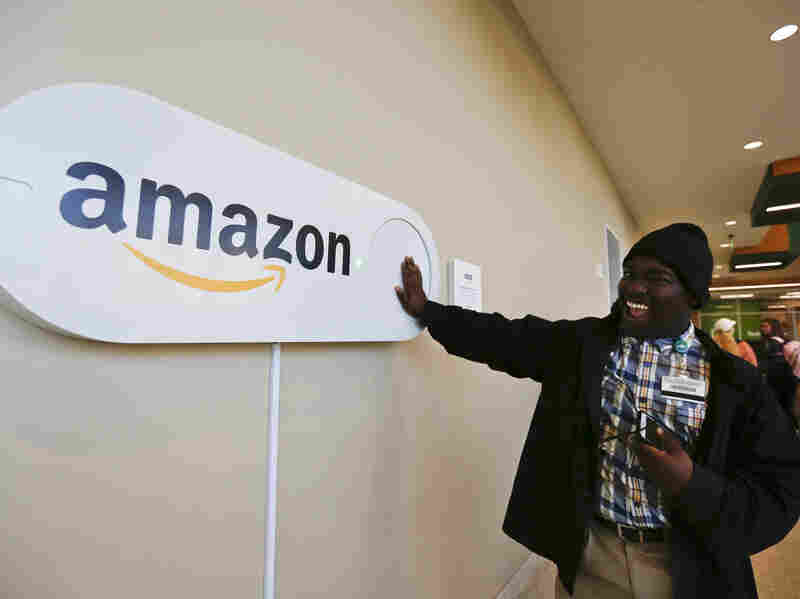 Zavian Tate, a student at the University of Alabama at Birmingham, pushes a large Amazon Dash button, part of the campaign to lure Amazon's second headquarters to the city. Brynn Anderson/AP hide caption 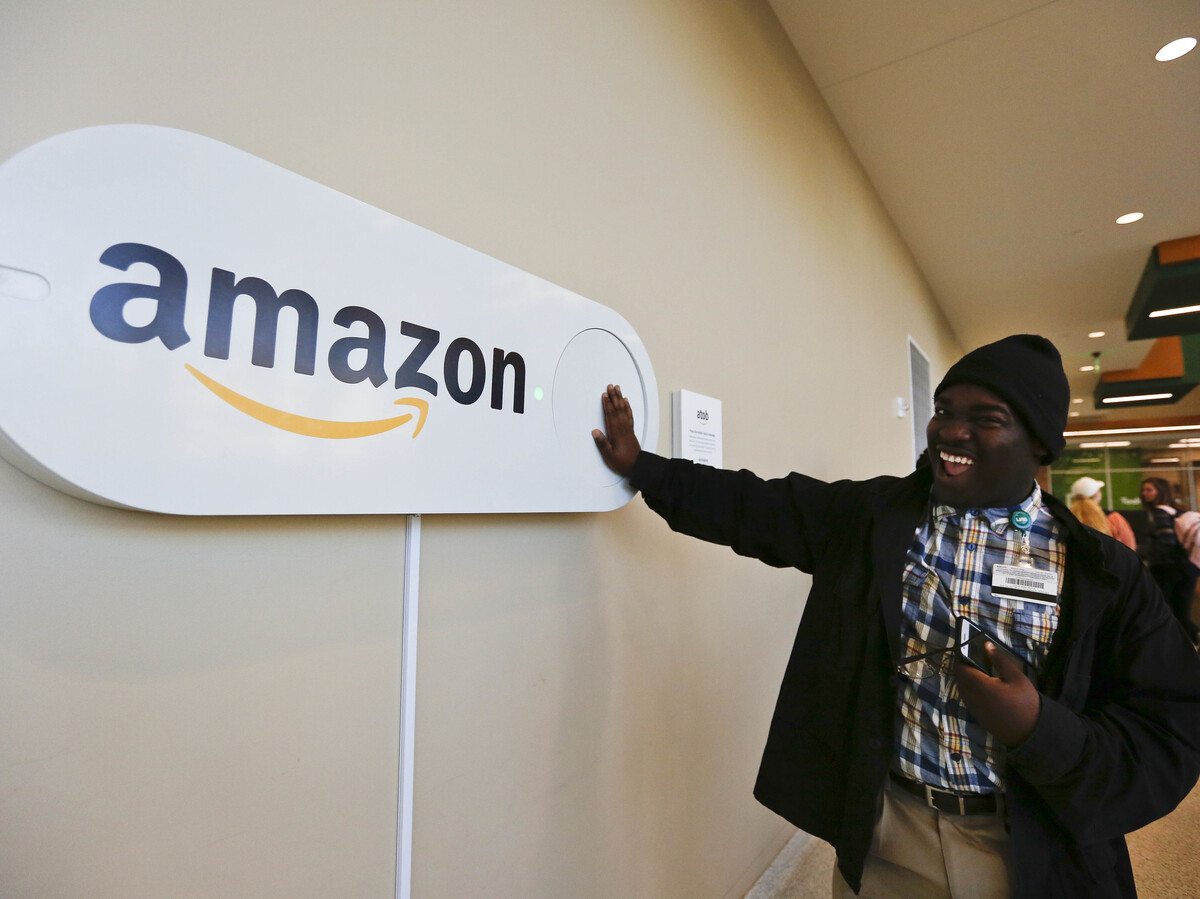 Zavian Tate, a student at the University of Alabama at Birmingham, pushes a large Amazon Dash button, part of the campaign to lure Amazon's second headquarters to the city.

But for weeks, much of the news from Alabama has been about Senate candidate Roy Moore. He has denied allegations of sexual misconduct with teenage girls when he was in his 30s. Some in Alabama's business community fear the Moore controversy will make recruiting companies and jobs to the state more difficult.

Susan Pace Hamill, who teaches business law at the University of Alabama, is among them.

"Roy Moore is a disaster for business and economic development," says Hamill. "He was a disaster even before the allegations."

Moore, a Republican, was twice removed as chief justice of the Alabama Supreme Court for defying federal court orders: first over a Ten Commandments monument in the Alabama Judicial Building and then over the U.S. Supreme Court ruling legalizing gay marriage. Hamill says that doesn't represent the stability and predictability that businesses want from elected leaders. She adds that recruiting high-profile projects is highly competitive.

"The fear is that his presence will tip the scales causing the business to choose somebody else," Hamill says.

Jennifer Skjellum, the outgoing president of TechBirmingham, an organization that promotes and recruits tech companies and talent, is concerned, too.

"Anything that makes Alabama look backward does not bode well for the business climate," Skjellum says.

As a native Californian, she says people, particularly from politically progressive parts of the country, will ask her what Alabama is really like. She says it's often based on a general perception rather than a specific news story.

Her concern is not that the Roy Moore controversy would make or break a software company coming to the state but that it would drive away talent in the long term, even homegrown workers.

"Like I don't want to be associated with Alabama and maybe I went to school there, but this is not a place that I feel is conducive to how I want to live my life," says Skjellum.

Dennis Donovan is a principal with Wadley Donovan Gutshaw Consulting, a firm that works with business on-site selection. He doesn't expect Roy Moore to have a widespread effect on business in Alabama. Donovan says you might see it with consumer brands and high-tech companies, which are more image-conscious.

"If you're the high-technology company, you're footloose. You can go almost any place," Donovan says. "Once you start getting into these automobile plants and so forth, based on logistic and infrastructure, starts to narrow down fairly quickly where you're going to go."

That is why he doesn't see the controversy affecting Alabama's pitch for a $1.6 billion joint plant by Toyota and Mazda. Alabama's reportedly a finalist for the project.

Donovan praises Alabama officials for working to change perceptions of the state. For instance, Birmingham has received accolades for its food scene. But Donovan says a Roy Moore win hurts those efforts.

A spokesperson for the Alabama Department of Commerce declined to comment.

The state has weathered a string of recent political scandals. Its House speaker was convicted of bribery last year. The previous governor resigned this spring from the fallout of an alleged affair with his top adviser.

But Skjellum says this moment could be different because issues of sexual misconduct have hit so many organizations, including NPR, becoming such a topic of conversation.

"Anything that shows Alabama voters or leaders not really thinking that this matters, that this is serious enough, is a problem," Skjellum says.

She doesn't think a Roy Moore victory is insurmountable for those in her line of work. It just might mean longer conversations with people not from Alabama.