Accessibility links
A Supreme Court Clash Between Artistry And The Rights Of Gay Couples A baker says being forced by Colorado law to make wedding cakes for same-sex couples would violate his First Amendment rights. The couple says the baker can't discriminate against them. 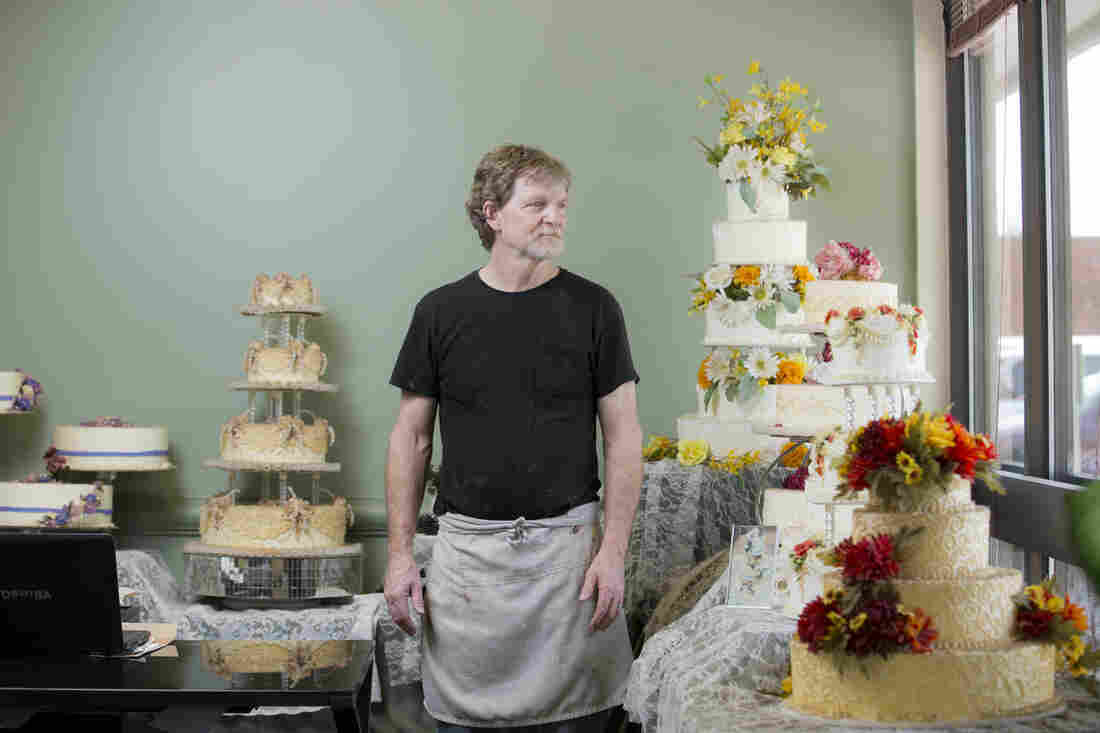 Jack Phillips, owner of Masterpiece Cakeshop in Lakewood, Colo., is one of the bakers who does not want to bake wedding cakes for same-sex couples, saying it violates his religious beliefs. Matthew Staver/The Washington Post/Getty Images hide caption 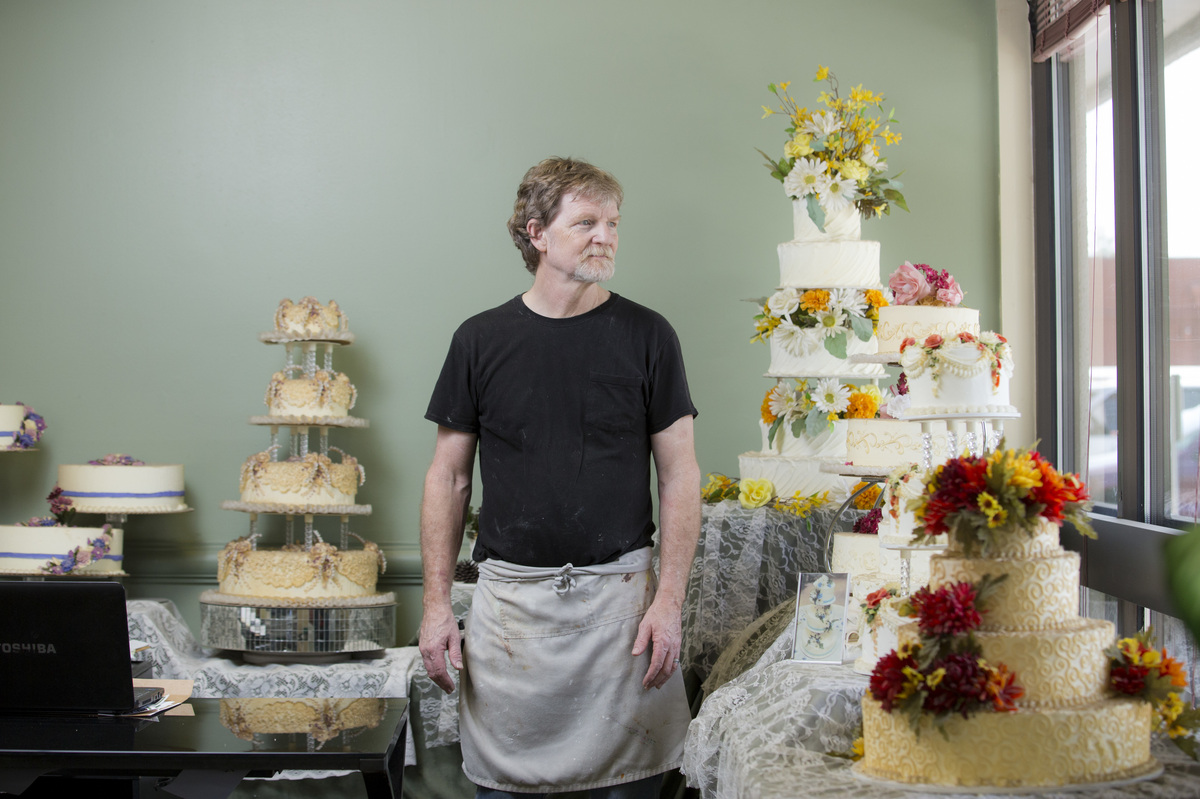 Jack Phillips, owner of Masterpiece Cakeshop in Lakewood, Colo., is one of the bakers who does not want to bake wedding cakes for same-sex couples, saying it violates his religious beliefs.

Every Supreme Court term there is at least one case that gets people's blood up. A case on which just about everyone has an opinion, often a ferocious opinion. That case comes before the justices Tuesday.

On one side is the state of Colorado and its public accommodations law barring discrimination against customers based on their race, religion, gender or sexual orientation. On the other side is a baker who is morally opposed to same-sex marriage and refuses to create cakes for same-sex wedding receptions.

A consensus about the facts but little else

There is no dispute about the facts of the case. Charlie Craig and Dave Mullins were organizing a wedding reception for themselves in Lakewood, Colo., and were referred by their wedding planner to the Masterpiece Cakeshop, known in particular for its wedding cakes.

When Mullins, along with Craig and his mother, arrived at the shop, bakery owner Jack Phillips greeted them politely, but, as soon as he realized who the wedding cake was for, Phillips instantly knew this was "not a cake that I can make." And he informed them that he did not make cakes for same-sex weddings.

Phillips believes that same-sex marriages are sinful, that marriage is to be between a man and a woman. "I don't believe that Jesus would have made a cake if he had been a baker," he said on ABC's The View. "I'm not judging these two gay men," he continued, "I'm just trying to preserve my right as an artist to decide which artistic endeavors I'm going to do and which ones I'm not."

That, however, was not how Charlie Craig felt. "Man, it was just really humiliating," Craig says, noting that he was particularly embarrassed for this to have happened in front of his mother.

His mother, Deborah Munn, remembers the silence in the car afterward. "I could see my son's shoulders were starting to shake; he had broke down and he was crying," she says. "I could not believe that a business owner, someone who makes pastries, could simply turn someone away because of who they are."

As the couple would soon learn, Colorado, like most states, has a state anti-discrimination law for businesses that are open to the public. Colorado bars discrimination based on race, religion, gender and sexual orientation. So Mullins and Craig filed a complaint with the state commission on civil rights, which ruled in their favor, as did the state supreme court. The baker, Jack Phillips, appealed to the U.S. Supreme Court.

For a half-century, the high court has upheld public accommodations laws against challenges brought by people who claim that their sincerely held beliefs — religious and otherwise — prevent them from serving customers on an equal basis.

It's about the message

In this case, Jack Phillips argues that the couple could have bought any pre-made cake in the bakery's cooler, but he was not willing to use his artistry as a cake creator to further a cause he is opposed to, namely gay marriage.

"Wedding cakes have played an iconic role in American culture and in religious life," explains Kristen Waggoner, of Alliance Defending Freedom, who is arguing Phillips' case at the Supreme Court.

"The First Amendment protects the right of all Americans to decide what they will express and when they will remain silent," she continues. "It's fundamentally different than saying to someone, 'I will not serve you just because of who you are.'" This case, she maintains, "is about the message."

All agree there was no discussion of any writing on the cake or its design. The message, Waggoner contends, is the fact that this is a cake announcing a same-sex wedding.

Even if Mullins and Craig wanted a simple three-tiered white cake without writing, the First Amendment protects Jack Phillips' artistic and religious right not to create it, she argues. 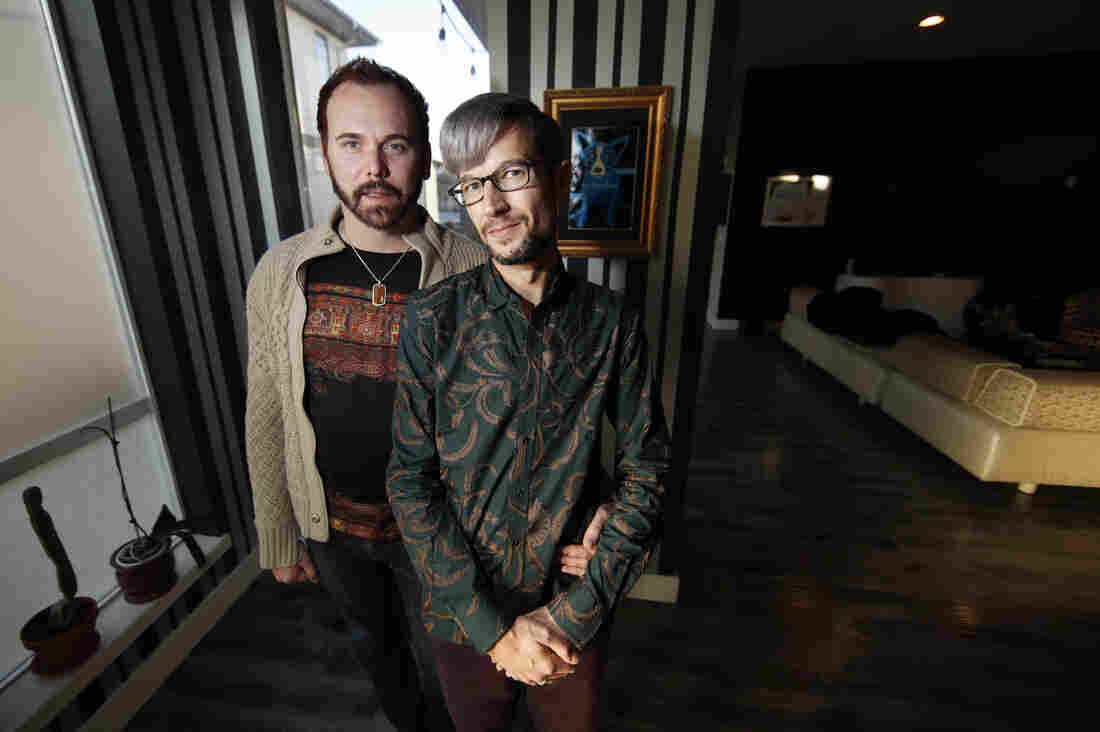 Charlie Craig and David Mullins are at the core of a legal case that goes before the U.S. Supreme Court after Denver-area baker Jack Phillips refused to make the couple's wedding cake due to his Christian faith. David Zalubowski/AP hide caption 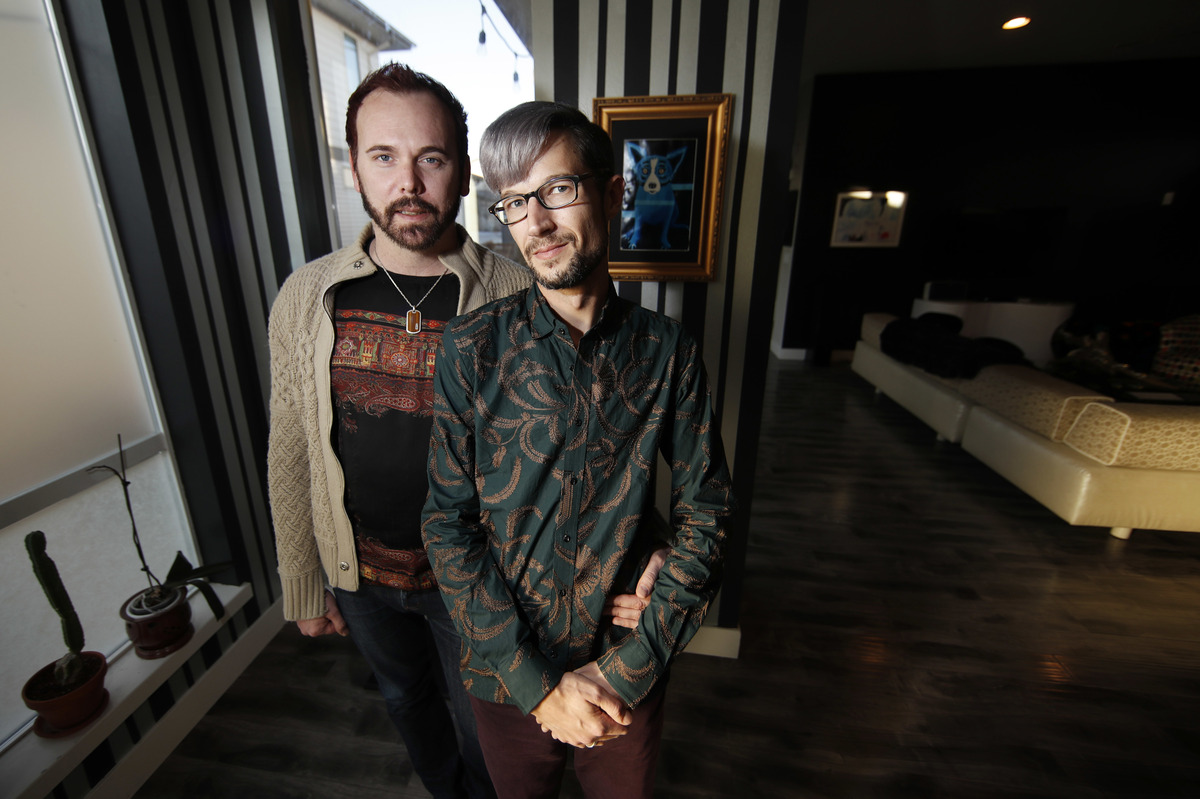 Charlie Craig and David Mullins are at the core of a legal case that goes before the U.S. Supreme Court after Denver-area baker Jack Phillips refused to make the couple's wedding cake due to his Christian faith.

The problem is discrimination

The state of Colorado disagrees, backed by leading First Amendment lawyers who argue the case is not about freedom of speech.

Instead, what Phillips did is "no different conceptually than if an artist offered to paint people at a gallery for a fee but refused to paint black people," says First Amendment advocate Floyd Abrams.

"We're not asking Mr. Phillips to alter the content of anything that he produces," says the ACLU's David Cole, who represents the couple. "We're asking for the same product that he would sell to a straight couple."

Cole adds that businesses can refuse to create a message they oppose, as long as the refusal is not based on the identity of the customer. A bakery could refuse to put a racist message on a cake or a sexually explicit message or, for that matter, a message endorsing gay marriage.

"The problem here," Cole says, "is that Jack Phillips and Masterpiece Cakeshop would make the exact same wedding cake and sell it to a straight couple but refuse it to a gay couple. That's not free speech, that's discrimination."

Waggoner, the lawyer for Phillips, has a different take. Messages have different meanings in different contexts, she says. If a baker makes a cake featuring a cross on it for the United Methodist Church, "should you also have to design that for the Arian Church?"

Stressing the notion of context and the symbolic nature of the cake, she contends that "the cake-cutting ceremony is "the first marital act that the couple does together." It is "certainly not something someone orders because they want to supplement the salmon and filet." And it "serves as a temporary monument for the wedding celebration."

In this case, needless to say, the couple did not go cakeless. On hearing of their experience, Lora of Lora's Donuts and Bakery Shop, volunteered to make the wedding cake — and she did it with a classic exterior and inside layers in rainbow colors.

As for Jack Phillips, he has given up creating wedding cakes in order to comply with the Colorado law and stay in business. But he estimates he has lost 40 percent of his work and says he has laid off more than half of his employees.

Ultimately though, this case is about more than wedding cakes. It is about what, if any, constitutional exceptions are permissible when a state enacts a broad anti-discrimination law that treats every commercial business in the same manner. Although this case involves cakes, it could as easily apply to florists, photographers and wedding caterers.

And, beyond that, it could apply to laws governing everything from health and safety to employment.

A law unto himself

The late Justice Antonin Scalia, a conservative icon, once wrote that regardless of an individual's "conscientious religious scruples," he must comply with an otherwise valid law that is neutrally applied to all. Thus, citizens who disagree must still obey laws that make polygamy illegal, or laws that compel the payment of taxes for programs that the individual may disagree with. To do otherwise, said Scalia, would be to make each individual a law unto himself.

Ironically, it was the court's more liberal justices who partially dissented from that 1990 decision, viewing it as unduly rigid and one-size-fits-all. Now the tables are turned, and it is conservative legal theorists who are pressing for a constitutional exemption to a broad general law.

A decision in the wedding cake case is expected by June, the month most associated with weddings.