Accessibility links
Week Ahead: Trump Aims To Dismiss Russia Probe As Partisan After anti-Trump texts between FBI agents, expect conservative allies of the president to allege that special counsel Robert Mueller and his investigators have an anti-Trump agenda. 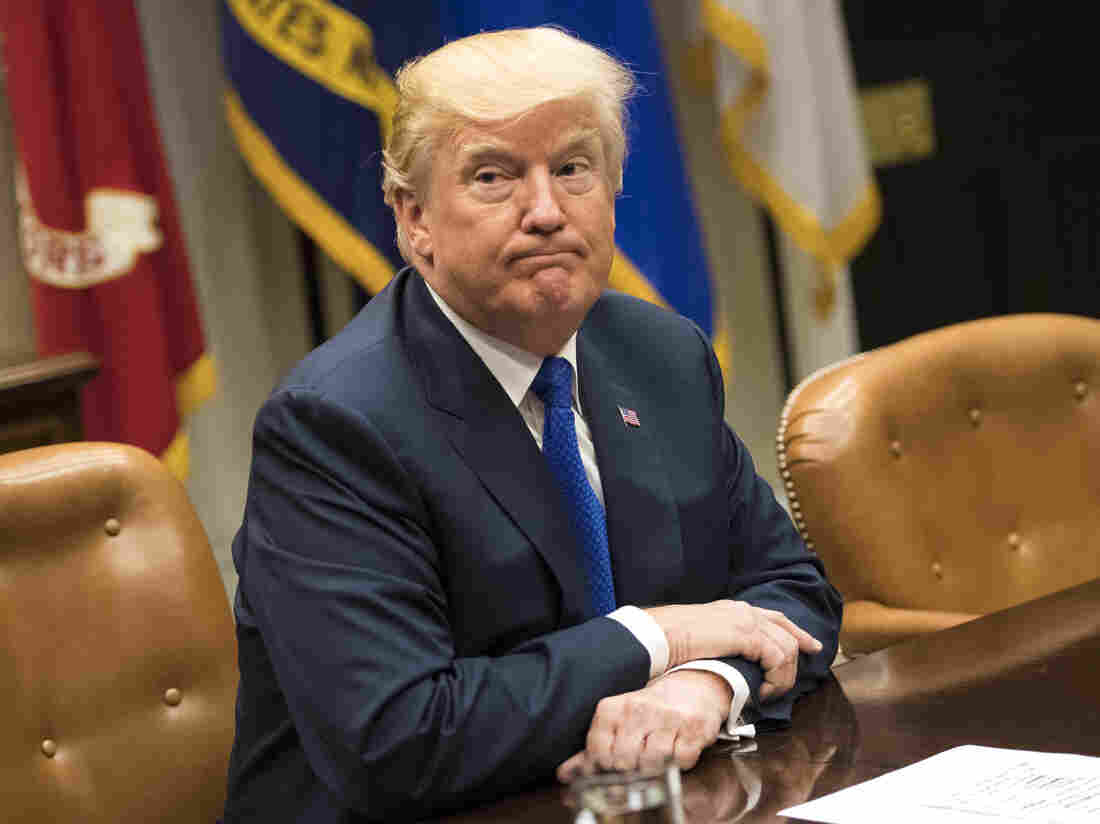 President Trump, seen in the Roosevelt Room of the White House, lashed out in a series of tweets at the FBI after his former national security adviser's guilty plea in the Russia probe. Pool/Getty Images hide caption 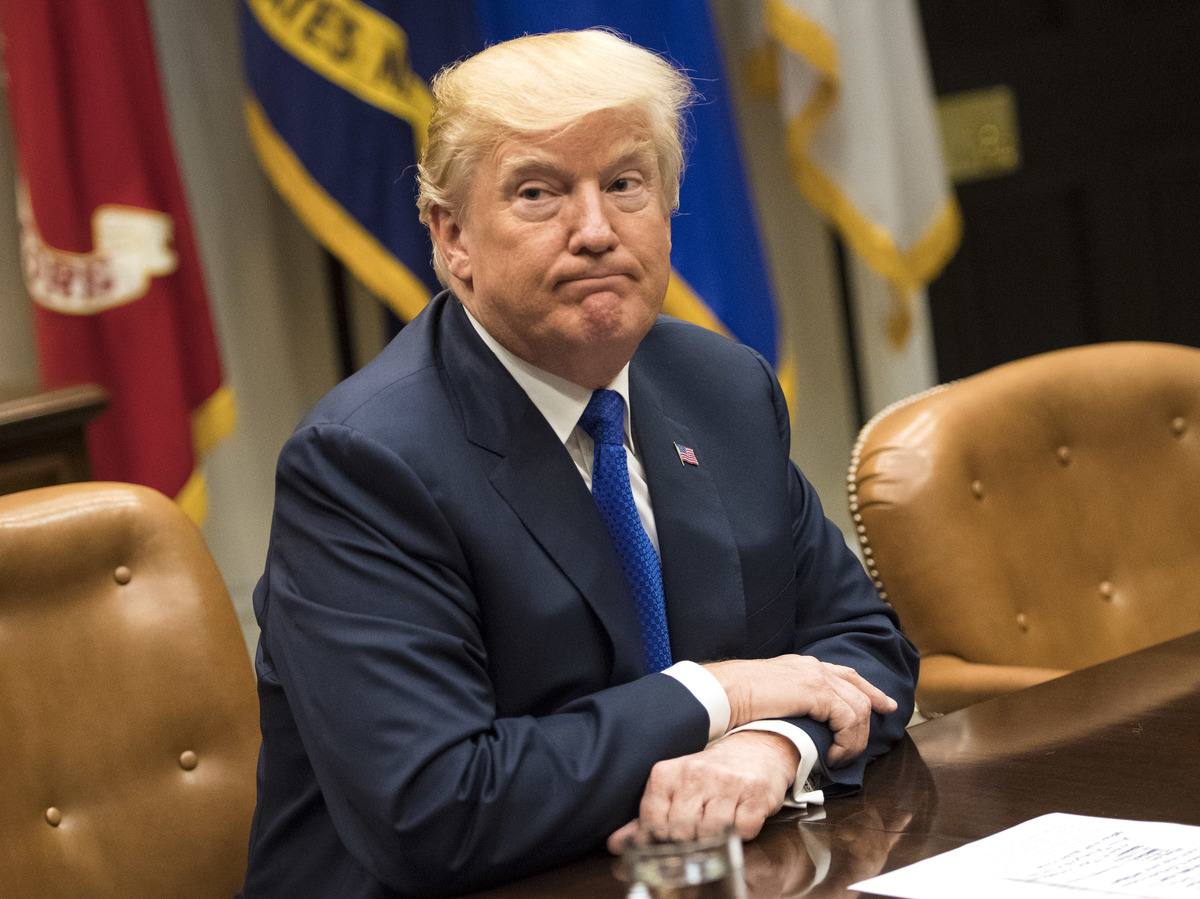 President Trump, seen in the Roosevelt Room of the White House, lashed out in a series of tweets at the FBI after his former national security adviser's guilty plea in the Russia probe.

In a week when Republicans are trying to get a tax overhaul bill to the president's desk for the first piece of major legislation he would sign (more on that below), that story gives the White House a much needed talking point, as the president is again being threatened by the Russia investigation. In response, Trump and his allies are undertaking an all-out effort to undermine Mueller's work — and the FBI itself.

Mentioning the anti-Trump texts on ABC's This Week Sunday, Chris Ruddy, the CEO of the conservative site Newsmax and a Trump friend, said Mueller represents an "existential threat" and is racking up charges at "lightning speed. ... You get a picture that this group is out to get the president." (Remember, Ruddy told PBS NewsHour back in June that Trump was considering firing Mueller, which the White House denied at the time.)

The president took up the charge during a weekend tweetstorm. He criticized the FBI, saying its "reputation is in tatters," and he painted a conspiratorial picture of the anti-Trump texts: "Now it all starts to make sense!"

He even defended Flynn, alleging a "double standard." Expect Trump supporters this week to dig in and say the texts are just the tip of the iceberg, that they prove the sentiment is endemic among Mueller's team.

Serving its political purpose: Of course, the irony here is that Mueller removed the investigator months ago upon learning of the texts. But that pro-Trump talking point is already serving a critical purpose — to muddy the waters, keep Trump's base on board and insulate the president from further political damage.

Building a case of obstruction: Democrats are moving in another direction this week, raising a big charge against the president: "I think what we're beginning to see is the putting together of a case of obstruction of justice," Sen. Dianne Feinstein of California, ranking member of the Senate Judiciary Committee, said on NBC's Meet the Press.

"I think we see this in the indictments, the four indictments and pleas that have just taken place, and some of the comments that are being made. I see it in the hyperfrenetic attitude of the White House: the comments every day, the continual tweets. And I see it, most importantly, in what happened with the firing of Director Comey, and it is my belief that that is directly because he did not agree to lift the cloud of the Russia investigation. That's obstruction of justice."

What did the president know and when did he know it? Another weekend Trump tweet raised new questions about obstruction when he indicated he knew Flynn lied to the FBI before he fired then-Director James Comey.

I had to fire General Flynn because he lied to the Vice President and the FBI. He has pled guilty to those lies. It is a shame because his actions during the transition were lawful. There was nothing to hide!

Remember that Trump fired then-acting Attorney General Sally Yates (the stated reason was that she wouldn't defend his travel ban) after she told White House counsel Don McGahn that Flynn had lied to the vice president about his conversations with the Russian ambassador.

And remember that after Comey was fired some months later, he submitted in testimony — under oath — that Trump asked him to let "Flynn go" in a Feb. 14 meeting. Perhaps realizing the potential damage of Trump's tweet, his personal lawyer, John Dowd, took ownership of it. "My mistake," he said in an interview with Axios. "I'm out of the tweeting business."

Yates testified before Congress that she told McGahn that the FBI interviewed Flynn Feb. 24 but declined to tell him how Flynn did. Dowd told NPR's Tamara Keith in an email Sunday that in Yates' meeting with McGahn:

"No accusation of lying had been lodged or conveyed to [White House counsel] by Yates, Justice or FBI. Just that F[lynn] told the agents what he told VP."

In response to a follow-up question seeking clarification, Dowd replied:

"No, it does follow. Yates NEVER said he lied. That's the point."

That's not much more clarifying. For the record, Trump hotly denies that he "asked Comey to stop investigating Flynn." He said in a tweet Sunday it was Comey who was lying:

Well, someone's not telling the truth. And we haven't heard the last of the Mueller investigation.

Can Trump get his win on taxes? 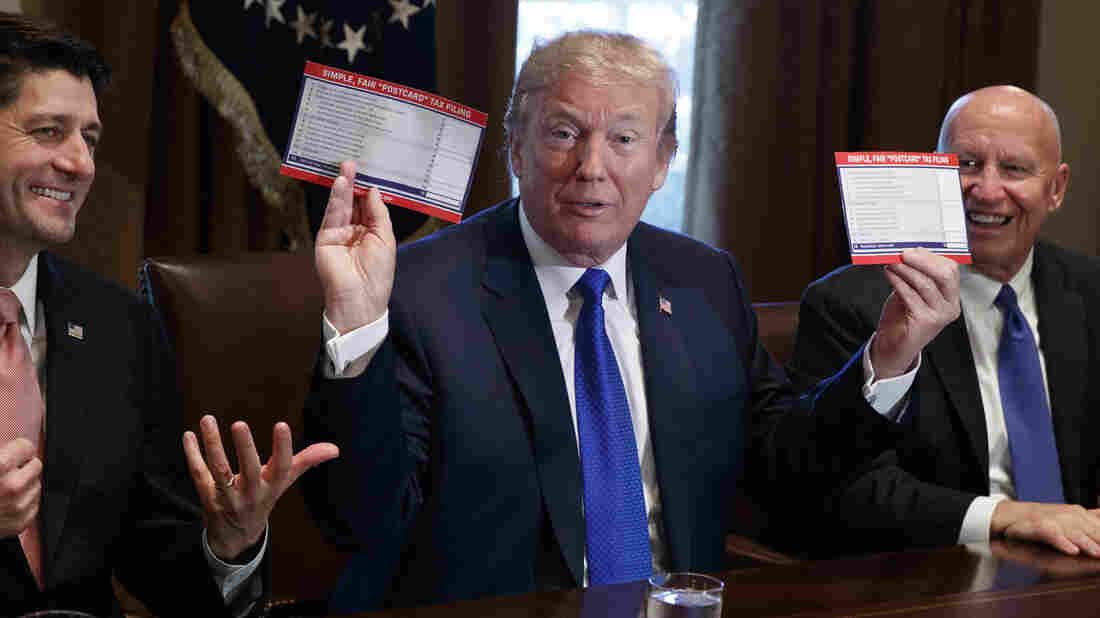 President Trump holds an example of what a new tax form may look like during a tax-policy meeting at the White House with Republican lawmakers. Evan Vucci/AP hide caption 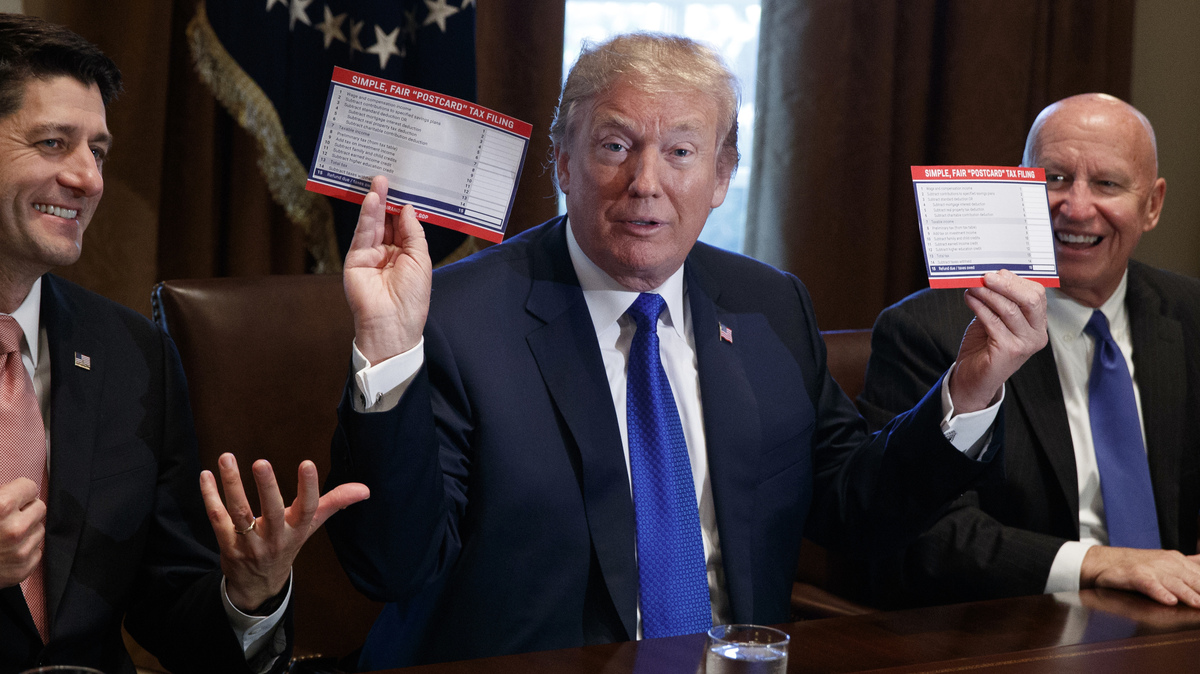 President Trump holds an example of what a new tax form may look like during a tax-policy meeting at the White House with Republican lawmakers.

Now that the House and Senate have each passed their own versions of a tax bill, they have to be reconciled. Republicans plan to set up a conference committee, where differences in the two bills will be worked out. And there are some significant differences:

-- The Senate bill makes tax cuts for individuals expire after 2025 to comply with requirements to keep the deficit under control. The House bill makes them permanent.

-- The House bill eliminates the estate tax and alternative minimum tax, while the Senate bill just rolls those back.

-- The Senate bill officially ends enforcement of the Obamacare requirement that most Americans carry health insurance.

Those are just the highlights. However, Republican leaders promise they will move quickly to work things out and get President Trump the final tax bill, with a bow on it just in time to tuck under his Christmas tree.

"Conference in name only"? Democrats have blasted Republicans for voting on the Senate bill just hours after the final text was worked out late Friday, which followed a closed-door meeting where the bill was changed to win over holdouts. Some revisions were literally written out longhand in the margins, affecting major policy like how small businesses are treated in the tax code.

Any handwriting experts out there? I'd like to know what this says before they call for a vote. This is absurd. pic.twitter.com/6UkiJmuY9T

Democrats warn that the GOP will race through this final part of the legislative process, too. Oregon Sen. Ron Wyden was quoted by the New York Times predicting "a conference in name only." 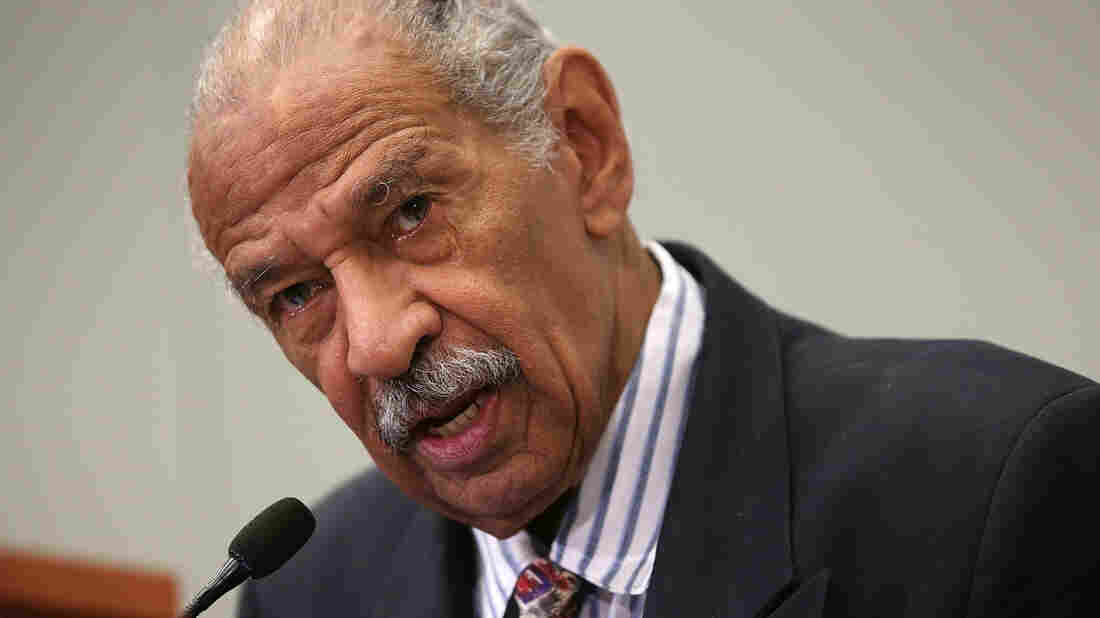 Rep. John Conyers, D-Mich., is expected to decide this week whether he will resign from Congress amid a sexual harassment settlement agreement and other harassment allegations. Alex Wong/Getty Images hide caption 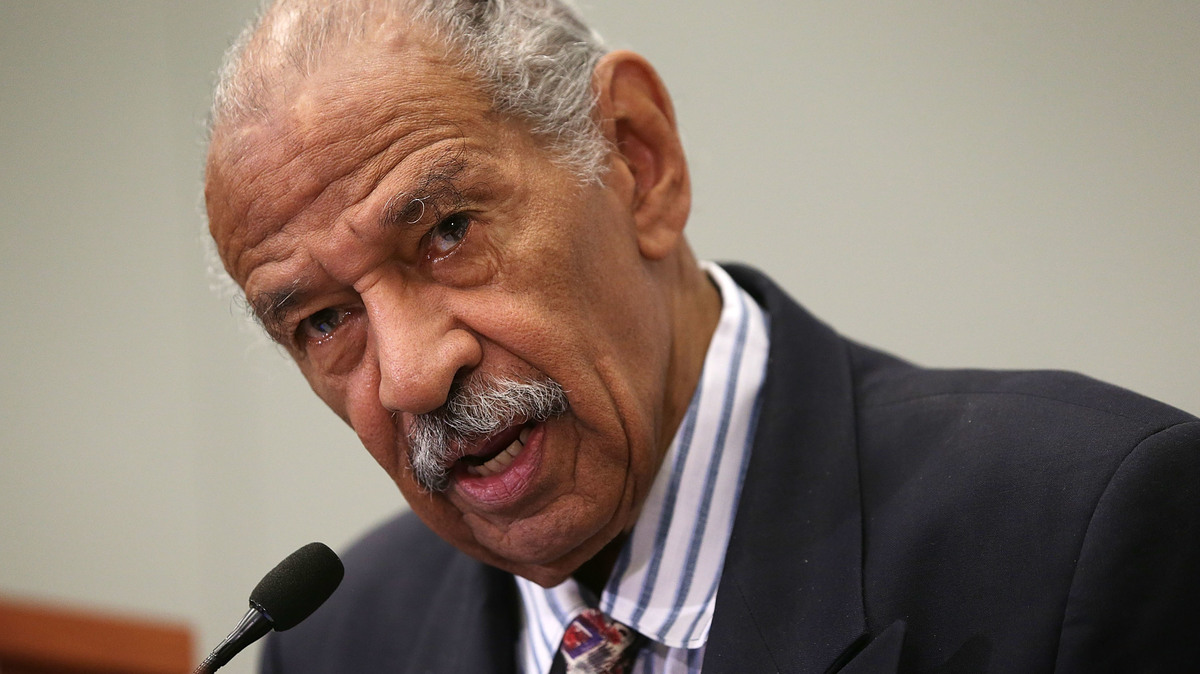 Rep. John Conyers, D-Mich., is expected to decide this week whether he will resign from Congress amid a sexual harassment settlement agreement and other harassment allegations.

Heading into the weekend, another Democrat came under scrutiny. Nevada freshman Rep. Ruben Kihuen was accused by a 2016 campaign aide of making sexual advances that forced her to quit her job, as reported by BuzzFeed. House Democrats' campaign chair, Ben Ray Lujan of New Mexico, and House Minority Leader Nancy Pelosi have called on him to resign.

Another Democrat Faces Calls To Resign Because Of Sexual Harassment Allegations

Does Conyers resign? Party leaders' reaction to Kihuen was a sharp contrast to how much slower they were to call on Rep. John Conyers to resign. And Conyers' future could be decided this week. (The Michigan Democrat settled with a woman who said she was fired for refusing his sexual advances, and there have been accusations of verbal abuse and unwanted physical contact.) The 88-year-old Conyers went into the hospital last week for stress as his original accuser went public. Conyers' lawyer said he would decide his future in the next few days, while also saying that his client is facing a double standard.

What about Franken? Conyers' lawyer asked why Pelosi and others have called on Conyers to resign, but not Minnesota Democrat Al Franken, a white Democrat. Franken is accused of groping by several women and forcibly kissing at least one. Franken has apologized but says he doesn't remember many of the alleged incidents. Conyers continues to deny all wrongdoing. House lawmakers will further examine questions about taxpayer-funded secret settlements this week.

Trump goes to "Floribama" to campaign for Moore 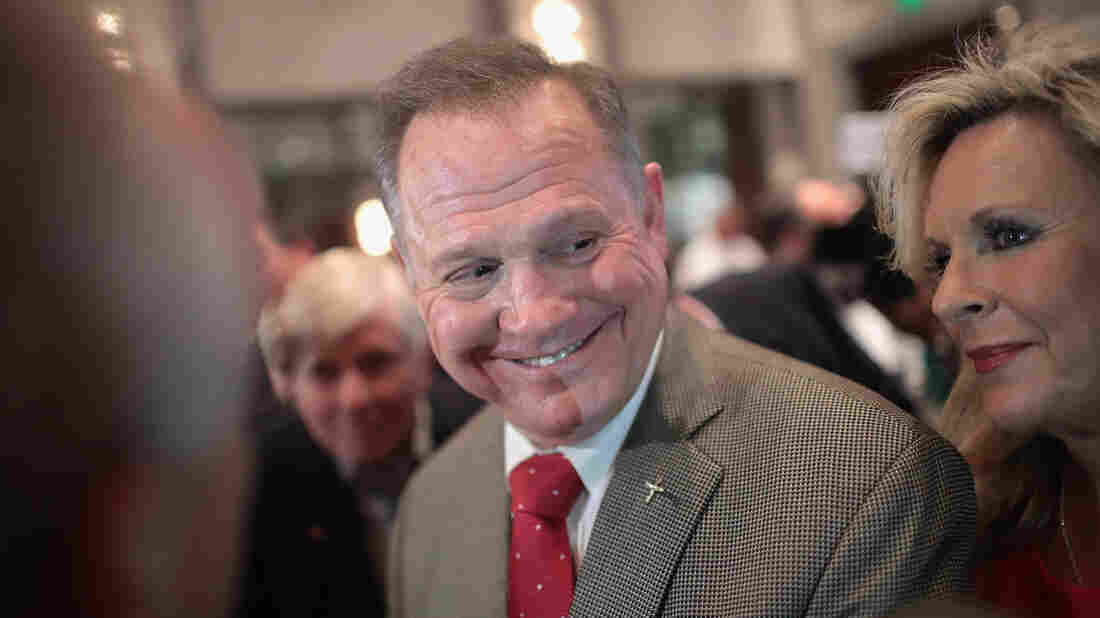 Roy Moore, the Republican candidate for the U.S. Senate in Alabama, is getting a boost from President Trump, who unlike other Republicans is backing his Senate bid despite sexual assault allegations. Scott Olson/Getty Images hide caption 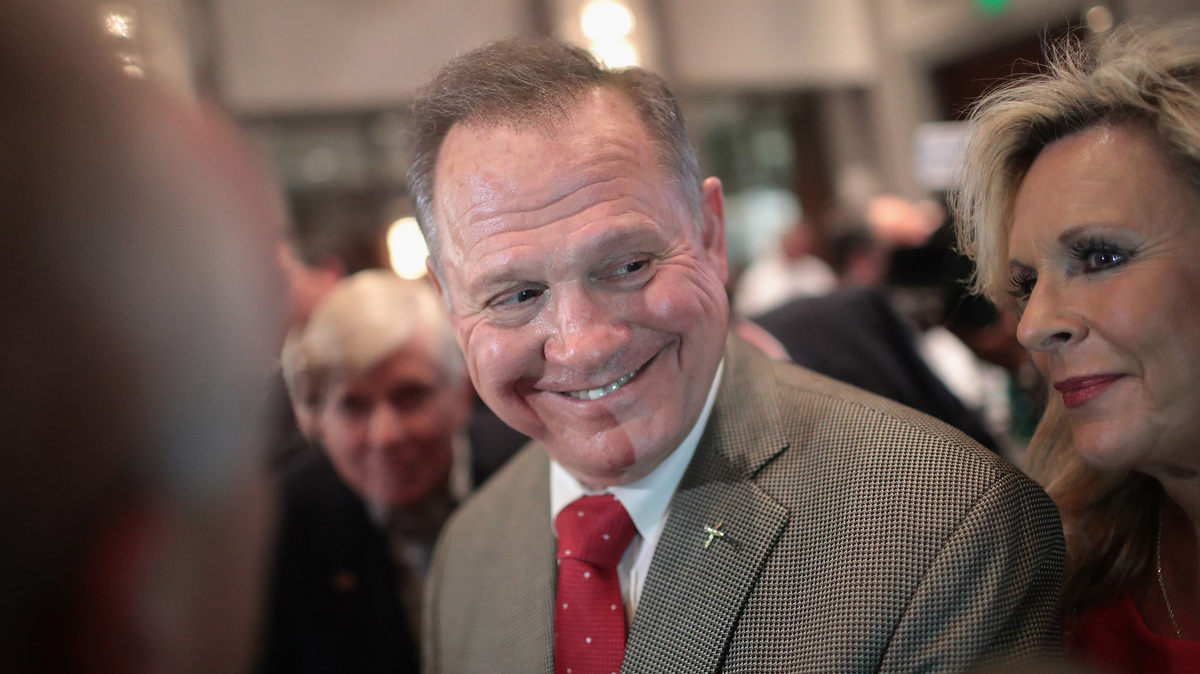 Roy Moore, the Republican candidate for the U.S. Senate in Alabama, is getting a boost from President Trump, who unlike other Republicans is backing his Senate bid despite sexual assault allegations.

Republican leaders look wearily to Alabama, just over a week before voters will decide whether to send Roy Moore to the Senate, as he faces numerous allegations including sexual assault against teenage girls. Trump is going to all but campaign for Moore on Friday, four days before the Dec. 12 special election. The president is holding a rally in Pensacola, Fla., and while it won't officially be a rally for Moore, it's in the Mobile, Ala., media market. Trump has given voice to Moore's denials while thrashing his opponent, Democrat Doug Jones.

Could Trump lay the groundwork to undo protections for federal lands — and open them up to development?

Trump is expected to shrink the size of the Bears Ears and Grand Staircase national monuments Monday during a trip to Utah. Depending on which side of the Trump administration's review of public-lands national monuments you fall on, this is either the latest example of the U.S. government breaking a promise to Native American tribes — many of whom supported the 1.3 million-acre Bears Ears National Monument — or it's one about an overreaching federal government.

Many conservative counties in rural Utah opposed both the Bears Ears and Grand Staircase national monument designations, because they restricted future development like mining on federal public land.

The law is gray at best when it comes to whether the president has the authority to shrink or abolish a large, protected national monument. Under the Antiquities Act of 1906, only Congress can do that. But when the administration started its review, officials suggested the law needs to be tested. Sixteen presidents — from Barack Obama to George W. Bush — have used the act to create public-lands monuments. Trump's decision in Utah Monday could very well set a precedent for future presidents to undo protections for public lands and other wild areas.

How's this for a stocking stuffer? 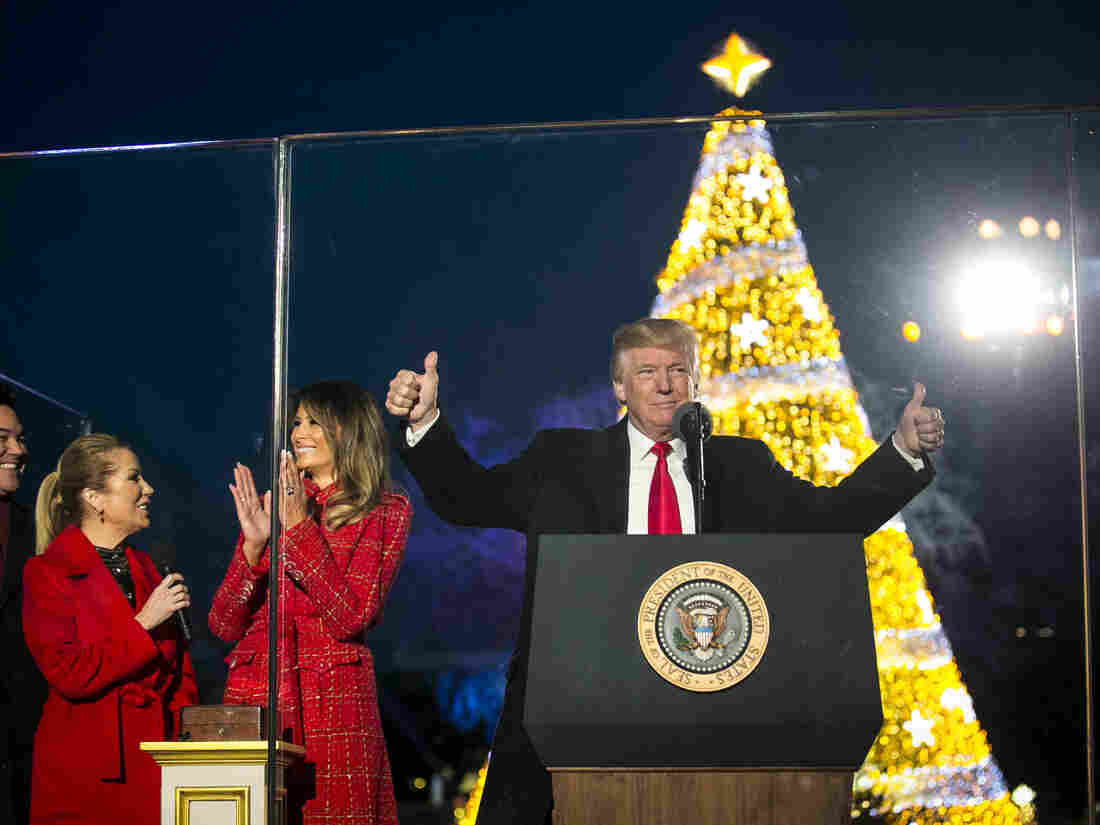 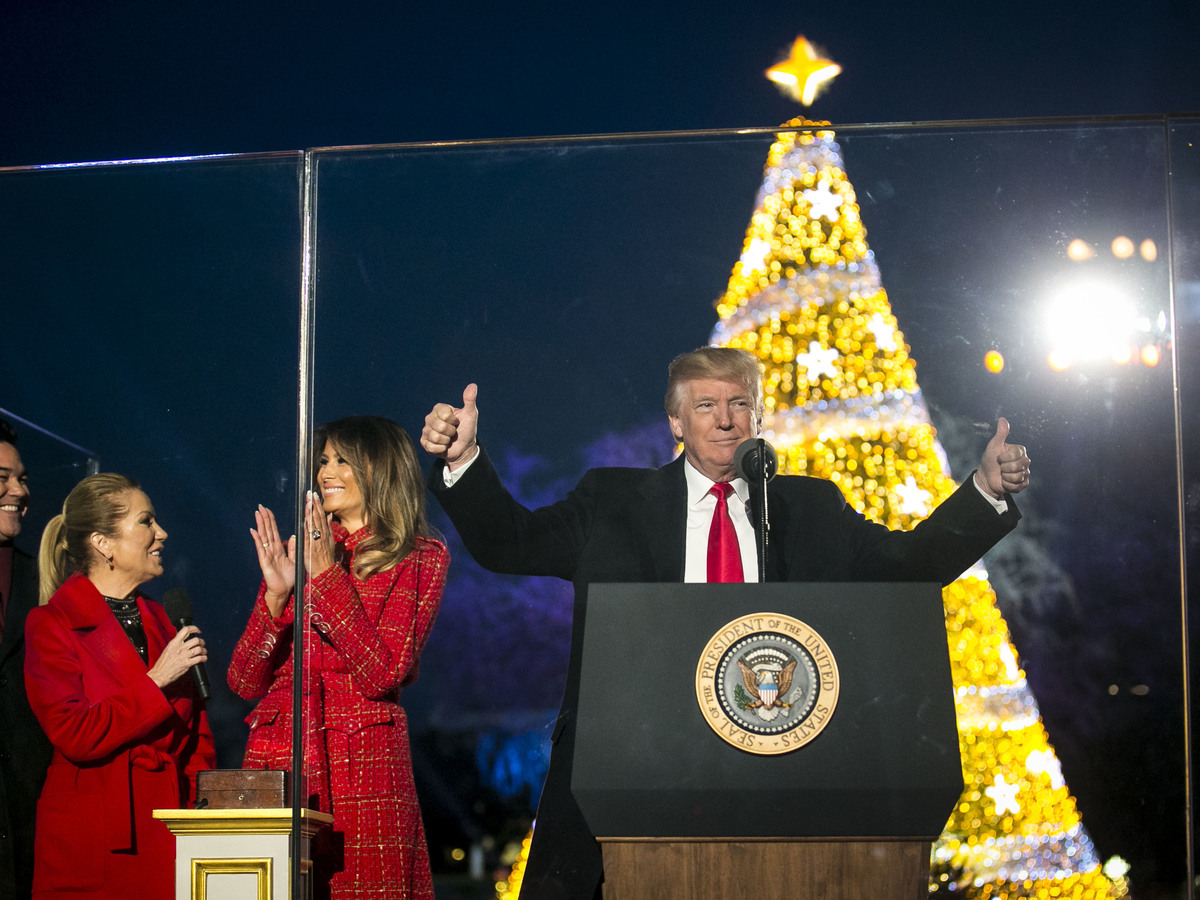 Congress needs to come up with funding by Friday to avoid a government shutdown. Expect another short-term, likely two-week, continuing resolution that expires Dec. 22. That could mean quite the pre-Christmas week between government funding and taxes.

The Washington Post reports that Trump has told allies a shutdown could be good for him politically.

either elect more Republican Senators in 2018 or change the rules now to 51%. Our country needs a good "shutdown" in September to fix mess!

A previous version of this story incorrectly referred to Sally Yates as Sally Quinn.