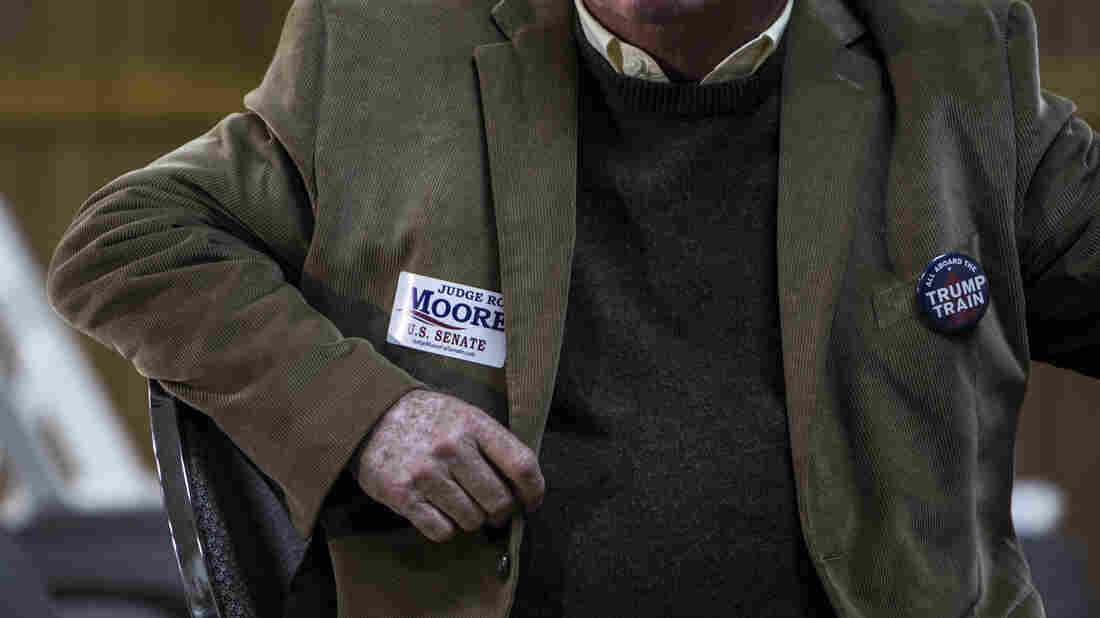 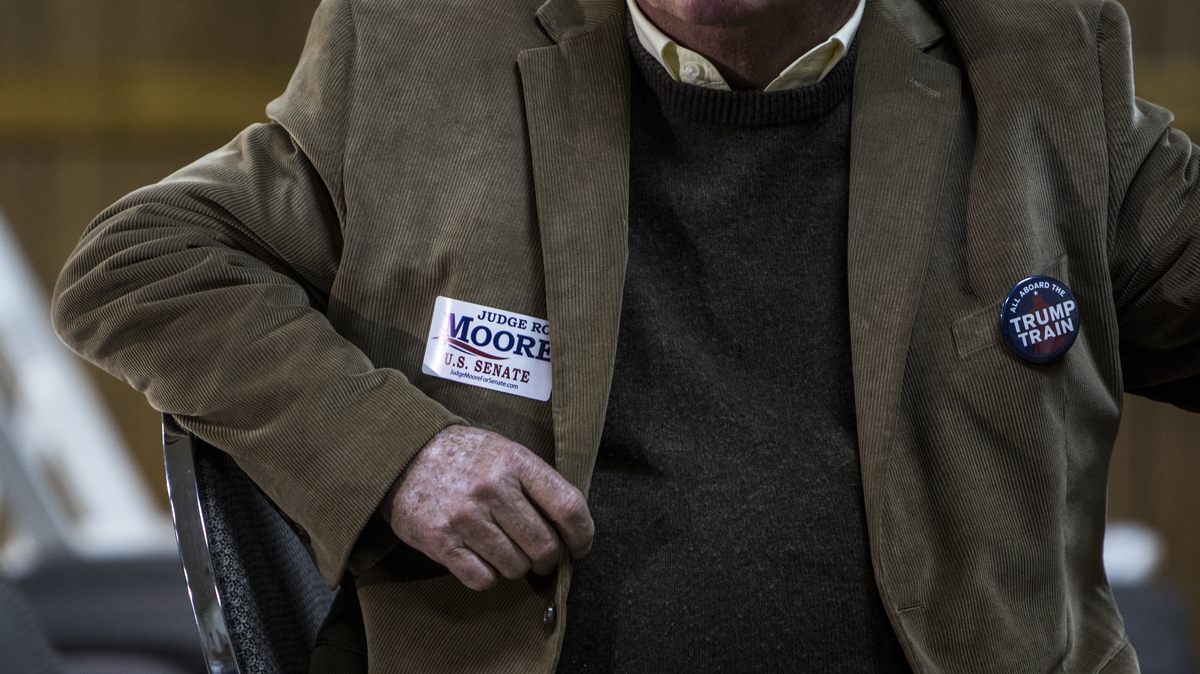 Judge Roy Moore supporters wait for a campaign rally to begin on November 27, 2017 in Henagar, Alabama.

Just over a week ahead of Alabama's special Senate election, President Trump and the Republican National Committee confirmed Monday they are standing behind embattled GOP nominee Roy Moore's campaign.

"Democrats refusal to give even one vote for massive Tax Cuts is why we need Republican Roy Moore to win in Alabama," Trump tweeted Monday morning. "Putting Pelosi/Schumer Liberal Puppet [Doug] Jones into office in Alabama would hurt our great Republican Agenda."

Democrats refusal to give even one vote for massive Tax Cuts is why we need Republican Roy Moore to win in Alabama. We need his vote on stopping crime, illegal immigration, Border Wall, Military, Pro Life, V.A., Judges 2nd Amendment and more. No to Jones, a Pelosi/Schumer Puppet!

Trump's support for Moore comes despite numerous women who say that Moore pursued relationships and sexual encounters with them when he was in his 30s and they were teenagers. One woman told the Washington Post that she was 14 when Moore sexually assaulted her. Moore denies the allegations, but pressed in an interview on Nov. 10 about whether he dated teenagers, he answered "not generally, no." He has since been more emphatic in his denials.

In addition to the tweet, Trump called Moore on Monday, according to the White House.

"The President had a positive call with Judge Roy Moore during which they discussed the state of the Alabama Senate race and the President endorsed Judge Moore's campaign," principal deputy press secretary Raj Shah said in a statement.

Senate Majority Leader Mitch McConnell, R-Ky., House Speaker Paul Ryan, R-Wis., and many other Republicans in Washington have said they believe the accusations against Moore and called on him to drop out. Colorado Republican Cory Gardner, who is heading Senate Republicans' 2018 campaign efforts, has said that if Moore wins he should be expelled from the Senate, and the National Republican Senatorial Committee pulled its support from Moore.

The Republican National Committee had previously halted fundraising efforts on behalf of Moore in the wake of the accusations, but an RNC official confirmed to NPR late Monday that the committee was planning to re-engage in the wake of Trump's endorsement. The RNC's decision was first reported by Breitbart News, whose executive chairman Steve Bannon is a vocal supporter of Moore. Bannon, a former chief strategist for Trump, will campaign with Moore in Fairhope, Ala., on Tuesday.

Trump has taken another path, all but endorsing Moore last month when he told reporters that Moore "totally denies it. He says it didn't happen." That's despite an initial White House statement calling on Moore to step aside from the race, "if these allegations are true." The president has also lambasted Democrat Doug Jones, Moore's opponent. Trump had endorsed Moore before the scandal, after he won the September primary over incumbent Sen. Luther Strange, whom the president campaigned for.

Trump briefly floated the possibility to reporters that he might campaign with Moore in Alabama, but the White House later clarified that Trump would not make any campaign appearances in the state. However, Trump will hold his own rally Friday night in Pensacola, Fla., which falls within the Mobile, Ala., media market. AL.com reported that the president's daughter-in-law Lara Trump was targeting Alabama voters with a robocall inviting them just across the border for the Florida rally, though she doesn't mention the Senate contest specifically.

Moore has been touting President Trump's tacit support and was quick to embrace his full endorsement this morning. Later, Moore also tweeted out that Trump had been incredibly encouraging in the call, telling him to "Go get 'em, Roy!"

The accusations against Moore — and national Republicans' near total-desertion of his campaign, apart from Trump — have made the Alabama Senate race unusually competitive. No Democrat has been elected to the Senate from Alabama since 1992.

Jones, a longtime federal prosecutor, led Moore by 3 points in a recent Washington Post poll, though that figure was within the survey's margin of error. Another poll over the weekend from CBS News/YouGov had Moore leading by 6 points and showed that the vast majority of GOP voters in Alabama believe the allegations against Moore are false.

If Jones defeats Moore next week, Republicans' Senate majority would narrow to just 51-49. McConnell had previously called on Moore to drop out, saying, "I believe the women." Over the weekend, McConnell said simply that it's up to the voters of Alabama.

Trump's comments are also at odds with what the president's daughter and adviser Ivanka Trump has said. She told the Associated Press on Nov. 15 that she had "no reason to doubt" the accounts of the women accusing Moore of sexual misconduct and that "there's a special place in hell for people who prey on children." Jones has since used those comments in a TV ad.