Accessibility links
Conyers Resigns Amid Sexual Harassment Allegations The move by the longtime Democratic congressman from Michigan came after top House Democrats and House Speaker Paul Ryan, R-Wis., had called on him to resign. 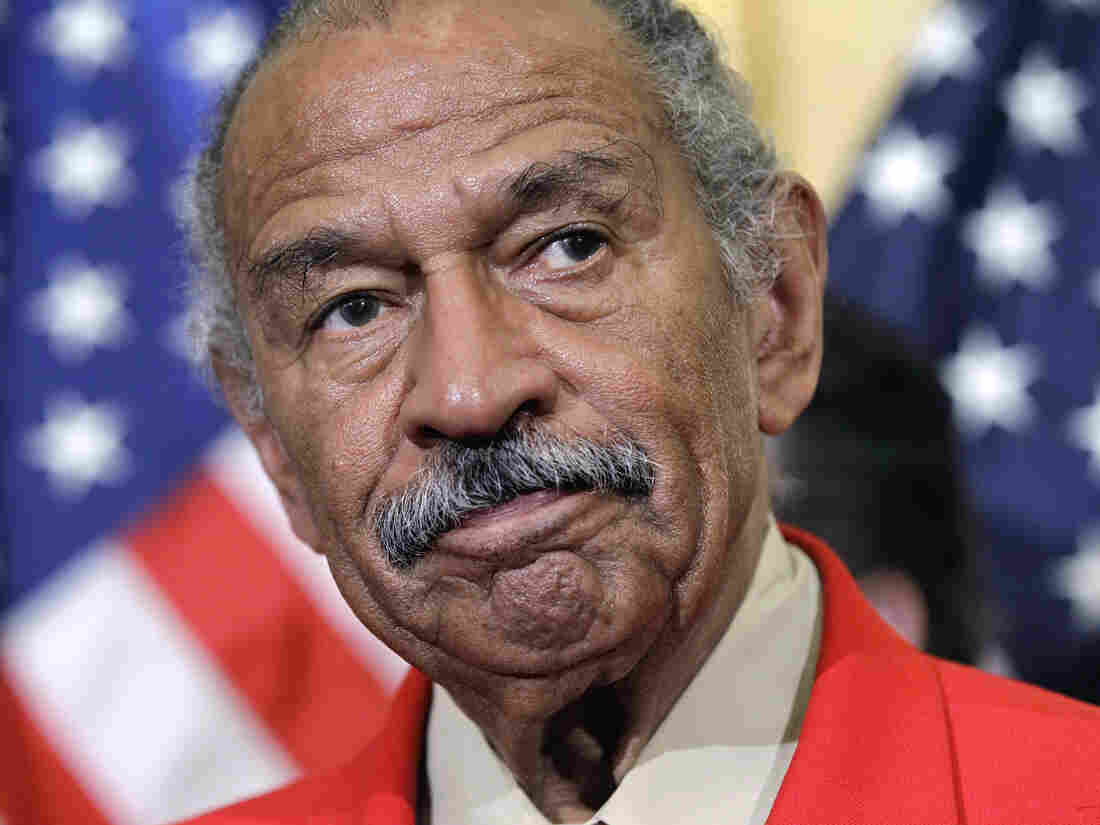 Several women have accused Rep. John Conyers, who is the most senior member of Congress, of verbal abuse, inappropriate touching and groping over decades. J. Scott Applewhite/AP hide caption 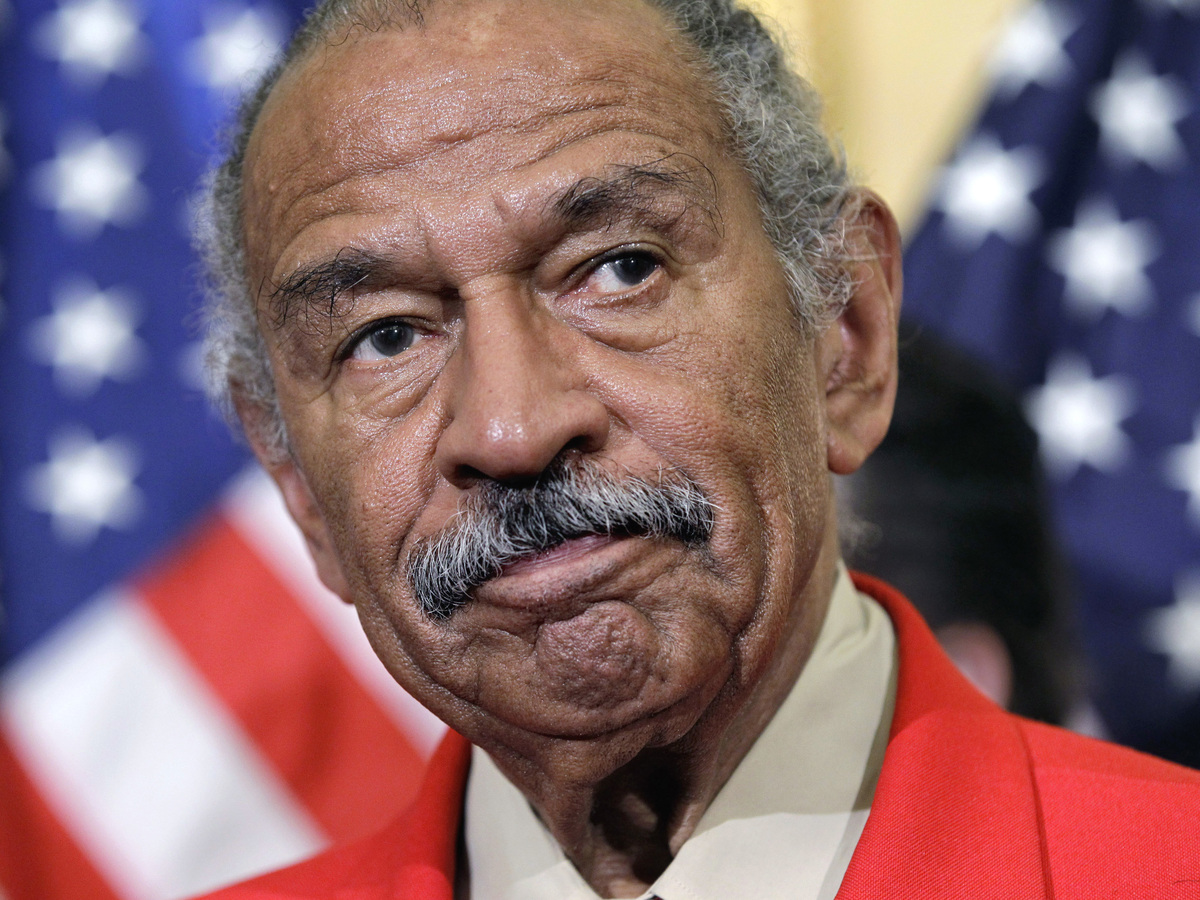 Several women have accused Rep. John Conyers, who is the most senior member of Congress, of verbal abuse, inappropriate touching and groping over decades.

Rep. John Conyers, D-Mich., has sent a letter to House Speaker Paul Ryan and Minority Leader Nancy Pelosi informing them of his decision to step down from Congress as of Tuesday, amid allegations of sexual misconduct leveled by multiple women.

Conyers told a Detroit radio show Tuesday morning that "I am retiring today," though he is effectively resigning. He also said in an interview on The Mildred Gaddis Show that he wants son John Conyers III to succeed him in Congress. "My legacy will continue through my children," Conyers said.

Michigan law says it's up to the governor to call a special election to fill the seat.

John Conyers spoke from an undisclosed hospital, according to his attorney. He is being treated for stress-related health concerns.

Several women have accused the Michigan Democrat, who is the most senior member of Congress, of verbal abuse, inappropriate touching and groping over decades.

Conyers, 88, has denied the allegations, saying Tuesday that "they are not accurate; they are not true." But amid an inquiry by the House Ethics Committee following revelations of a settlement two years ago for wrongful dismissal of a female employee, Conyers is stepping down. The ethics committee does not investigate former members, so that inquiry would likely come to an end.

Last week, a woman who received a $27,000 confidential settlement, Marion Brown, described to NBC's Today her accusations against Conyers. "Violating my body, propositioning me, inviting me to hotels with the guise of discussing business, and then propositioning for sex," Brown said. "He just violated my body. He has touched me in different ways, and it was very uncomfortable and very unprofessional."

Brown said she came forward because she wants "to be a voice" and so that her granddaughter would "not have to endure sexism and gender inequality. I thought it was worth the risk to stand up for all the women in the workforce that are voiceless."

Pelosi, D-Calif., had called for Conyers' resignation after Brown's TV appearance. She had previously defended him, calling him an "icon."

Conyers stepped down as ranking member of the House Judiciary Committee on Nov. 26. He was the first African-American member of that committee.

Giving up his spot on the committee was a move that a senior Democratic aide said Pelosi helped orchestrate. The minority leader had spent a few days prior to Nov. 26 working with Conyers and other Congressional Black Caucus members on how to "lay groundwork for him to step aside gracefully," the aide told NPR's Scott Detrow.

On Nov. 27, Pelosi said she had spoken to another woman, Melanie Sloan, a founder of Citizens for Responsibility and Ethics in Washington, who had worked for Conyers and also came forward. She told The Washington Post about alleged mistreatment and verbal abuse, though Sloan said she did not believe she was sexually harassed by Conyers.

This afternoon, I spoke with Melanie Sloan who worked for Congressman Conyers on the Judiciary Committee in the mid-1990s. I believe what Ms. Sloan has told me. Read my full statement: https://t.co/OewsWUl6ZX

Conyers' potential resignation was raised in a statement by Congressional Black Caucus Chairman Cedric Richmond. Richmond, D-La., said he had met with Conyers on Nov. 28 and had a "very candid conversation about the seriousness of the allegations against him, which he vehemently denies."

He added that "any decision to resign from office before the ethics investigation is complete is John's decision to make."

Conyers missed two roll call votes in the House on the evening of Nov. 28, and he was photographed that night on a flight from Washington, D.C., back to Detroit.

Conyers was first elected in 1964 and is a founding member of the Congressional Black Caucus. He had previously served on the staff of former Rep. John Dingell, D-Mich. Conyers' congressional career, which spanned more than 50 years, included voting for articles of impeachment against President Richard Nixon. He sponsored the bill to declare Martin Luther King Jr.'s birthday a national holiday, as well as the Alcohol Warning Label, National Voter Registration and Hate Crime Statistics acts.

He also hired civil rights heroine Rosa Parks to serve on his congressional staff in his Detroit office. Parks worked for Conyers for more than 20 years.

A previous version of this story incorrectly said Rosa Parks worked for John Conyers for more than 30 years. She actually worked for him from 1965 to 1988.