Accessibility links
The Michael Flynn Timeline: 10 Events You Need To Know About The Flynn saga involves two presidents, a foreign ambassador, one fired FBI director and a lot of talk about Russian sanctions. 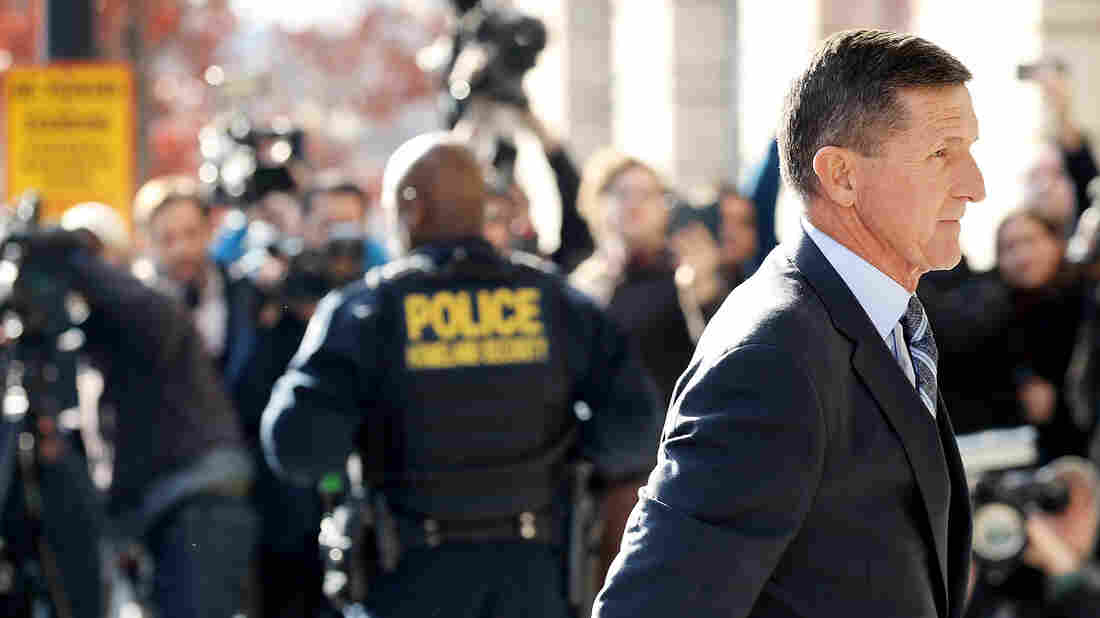 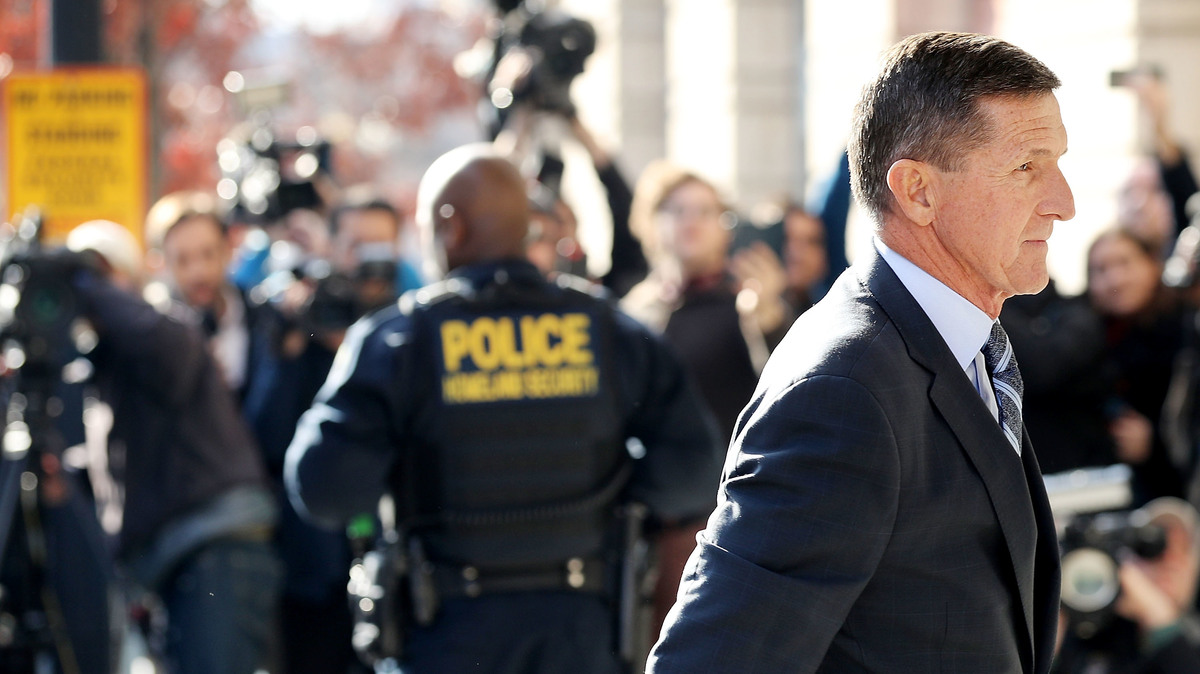 Former national security adviser Michael Flynn arrives for his plea hearing at the Prettyman Federal Courthouse in Washington, D.C. Special counsel Robert Mueller charged Flynn with one count of making a false statement to the FBI.

If the saga of Michael Flynn feels like it's been hanging over President Trump's head since Inauguration Day, that's because it has.

The story of how Trump's first national security adviser came to plead guilty to lying to FBI investigators and cooperate in the special counsel's Russia investigation spans two presidential terms and also touches government officials who were subsequently fired by Trump.

Here are 10 key events that explain why Flynn was legally vulnerable in special counsel Robert Mueller's probe and why his plea deal addresses one of the central questions in the wider Russia imbroglio.

On Dec. 28, 2016, then-President Barack Obama ejects 35 Russian diplomats from the United States and introduces new sanctions against a number of Russian security services and individuals.

The move is retribution for Russia's interference in the 2016 election, detailed in the unclassified summary of a highly classified report by the intelligence community early in the new year.

2. Flynn confers with transition officials and talks sanctions with Russia

On Dec. 29, Flynn speaks with the Russian ambassador to the United States, Sergey Kislyak, as well as a "senior official" of the presidential transition team, according to court documents in Flynn's case.

The documents describe how Flynn spoke to his colleague in the administration-in-waiting — identified by some outlets as former deputy national security adviser K.T. McFarland — about what to tell the Russian ambassador about the sanctions. Then he spoke with Kislyak on the phone.

"Flynn called the Russian ambassador and requested that Russia not escalate the situation and only respond to the U.S. sanctions in a reciprocal manner," say the court documents. The Trump camp wants to offer Moscow the prospect for a better relationship once Trump is inaugurated.

On Dec. 31, Kislyak calls Flynn back and says Russia indeed will not escalate, as he asked. Russian President Vladimir Putin confirms that with a public announcement, which Trump hails on Twitter.

After a Washington Post report alludes to Flynn's conversation, the administration-in-waiting begins denying they discussed sanctions. Not only is there suspicion about the issue itself; the question is raised about whether Flynn might have violated an obscure law that forbids Americans out of government to negotiate on behalf of the United States.

So on Jan. 15, then-Vice President-elect Mike Pence makes a case to CBS's Face the Nation.

"What I can confirm, having spoken to him about it, is that those conversations that happened to occur around the time that the United States took action to expel diplomats had nothing whatsoever to do with those sanctions," Pence said.

But the FBI, which was monitoring Kislyak's communications, knew that wasn't so.

In this interview, according to the charging documents, Flynn makes false statements about whether he asked Kislyak to refrain from "escalating the situation." He also says that he doesn't remember the follow-up conversation in which Kislyak confirms Russia's decision regarding a sanctions escalation.

Mueller's team also now says Flynn gave false statements in the interview about calls he made regarding a United Nations Security Council resolution.

On Jan. 26, acting Attorney General Sally Yates meets with White House counsel Don McGahn to warn him the Justice Department has evidence, via the FBI surveillance, that what Pence was saying publicly was inaccurate.

"We told him we felt like the vice president and others were entitled to know that the information that they were conveying to the American people wasn't true," Yates said in testimony to a Senate Judiciary panel in May.

She adds that because Russian diplomatic and intelligence officials also knew about the content of the conversations — and probably had their own proof of them — Flynn was vulnerable to blackmail.

"We believed that Gen. Flynn was compromised with respect to the Russians," she said. "To state the obvious, you don't want your national security adviser compromised by the Russians."

Yates and McGahn meet again the next day, Jan. 27, and they begin discussing ways that White House officials might review the evidence the FBI has about Flynn.

But Yates is fired by Trump three days later after announcing she will not defend his travel restrictions on refugees and visa holders from seven majority-Muslim countries.

The White House also says McGahn told Trump about Yates' warning that Flynn had lied to Pence and likely given the same account to the FBI.

On Jan. 27, President Trump arranges a dinner with then-FBI Director James Comey, where, according to Comey's testimony in front of the Senate Intelligence Committee, the president says: "I need loyalty, I expect loyalty."

It was uncomfortable, Comey said.

"I didn't move, speak, or change my facial expression in any way during the awkward silence that followed," Comey said. "We simply looked at each other in silence. The conversation then moved on, but he returned to the subject near the end of our dinner."

Comey said he felt like the dinner was an effort on the part of the president to have him ask for his job and "create some sort of patronage relationship."

On Feb. 13, Trump fires Flynn, after leaks reveal that Flynn did in fact talk about sanctions with the Russian ambassador. Flynn continues to deny the accusations, as close as four days before he is fired.

8. ... and Trump wonders aloud if Comey can let Flynn go

On Feb. 14, Comey goes to the Oval Office for a counterterrorism meeting, and Trump asks him to stick around afterward for a one-on-one meeting.

"When the door by the grandfather clock closed, and we were alone, the president began by saying, 'I want to talk about Mike Flynn,' " Comey testified in June. "He then said, 'I hope you can see your way clear to letting this go, to letting Flynn go. He is a good guy. I hope you can let this go.' "

Comey agrees Flynn is a "good guy" but says he will not agree to let it go.

On May 9, Trump fires Comey, saying in an interview two days later that the FBI director was a "showboat" and a "grandstander."

Trump also mentions the FBI's Russia investigation, which Comey was leading — "this Russia thing," as Trump calls it.

Discussion in Washington broadens from the question of potential collusion between the Trump camp and the Russian attack on the election to the question of obstruction of justice. Did the president try to get rid of the FBI director to keep him from finding out something Trump wanted to keep hidden? Deputy Attorney General Rod Rosenstein responds by appointing former FBI Director Robert Mueller to serve as a special counsel in the case.

On Nov. 30, Flynn signs a plea agreement with Mueller in which he acknowledges lying to the FBI about his sanctions conversation. On Dec. 1, Flynn appears in court and his deal becomes public.

The deal delivers to Mueller a witness who spent nearly all the 2016 campaign and the presidential transition at Trump's elbow, one who was involved with many conversations with foreigners, including key Russians. Flynn's cooperation resets the clock on the Russia imbroglio as he begins debriefing Mueller and his team.