Accessibility links
Trump Impeachment? Texas Democrat Forces Vote Against Party's Wishes Rep. Al Green forced a vote Wednesday on the controversial measure. It failed overwhelmingly and went against party leaders' wishes, as Democrats struggle to deal with an issue that animates its base. 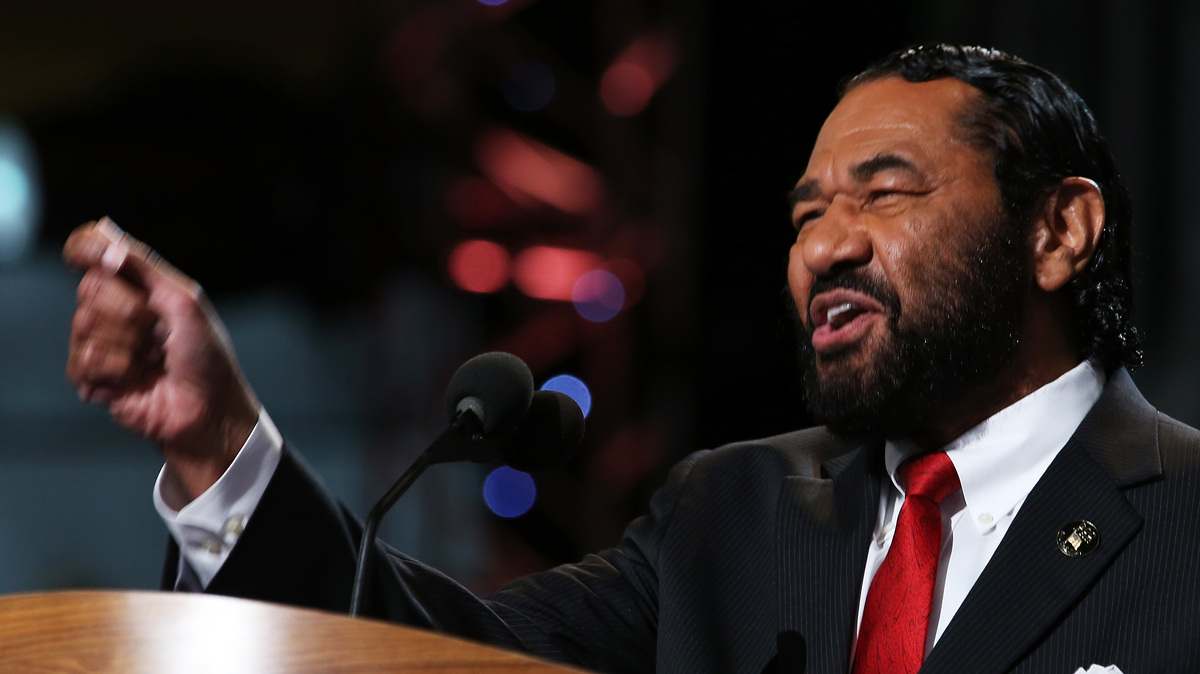 Texas Democrat Al Green forced a House vote on the impeachment of President Trump on Wednesday, but a broad bipartisan majority voted down the effort.

Green introduced two articles of impeachment against Trump. The articles did not include any charges related to Justice Department special counsel Robert Mueller's investigation, which has led to criminal charges against four Trump aides.

Instead, Green's impeachment articles focused on divisive statements and actions by Trump, including his defense of racist protests and violence in Charlottesville, Va.; derisive comments about National Football League national anthem protests; and recent retweets of videos posted by a far-right nationalist British group, among other things.

Trump, Green said on the House floor on Wednesday afternoon, has "undermined the integrity of his office and has sown discord among the people of the United States."

Whether or not Trump has committed any crimes, Green argued, is irrelevant to the discussion. "The question isn't whether we have a bigot as President, the question is: What are we going to do about it?" Green wrote in a letter to fellow lawmakers ahead of the vote. "The answer is: impeachment for his high misdemeanors, which need not be a crime."

Among the higher-ranking Democrats voting in favor of impeachment: Assistant Democratic Leader Jim Clyburn and Minnesota Rep. Keith Ellison, who serves as vice chairman of the Democratic National Committee.

In a joint statement issued shortly after Green introduced his impeachment articles on the House floor, Pelosi and Hoyer rejected Green's argument.

"Legitimate questions have been raised about [Trump's] fitness to lead this nation," they wrote, but added that "right now, Congressional committees continue to be deeply engaged in investigations into the President's actions both before and after his inauguration. The special counsel's investigation is moving forward as well, and those inquiries should be allowed to continue. Now is not the time to consider articles of impeachment."

Green argued that regardless of the various investigations' findings, Trump's actions and statements have met the political bar for removal from office. "Impeachment is a political remedy, not a judicial remedy, thus it may be a high misdemeanor, which may or may not be a crime," he wrote.

Green cites the impeachment of President Andrew Johnson, which has been viewed historically as an overtly partisan act.

Green's step widens a growing rift within the Democratic Party and its progressive base: whether to publicly call for the impeachment of an unpopular president at the center of an ongoing criminal investigation. And, if so, at what volume and urgency to call for that impeachment.

Most House Democrats want nothing to do with impeachment efforts right now and worry that publicly backing them as Mueller's investigation continues would make any eventual impeachment push look partisan.

"Electing a president of the United States is the most important act American citizens take in setting the policies of their country. That should not be overturned except for the most egregious and demonstrable facts," Hoyer recently told reporters. "Do we disagree with [Trump's] policies? We do. But disagreeing with the policies is not enough to overturn an election — a free and fair election — of the American people."

It's not just entrenched leaders like Hoyer and Pelosi who feel that way. "Here's what I say to my colleagues: If a Republican were to say that they were never going to vote to impeach Trump no matter what Bob Mueller found, we would say that's totally unreasonable," said California Rep. Ro Khanna, a progressive freshman representing Silicon Valley. "You have to look at the evidence. Similarly, there's no way we should be saying that we could vote for impeachment without the end of Mueller's findings. Let's wait to see what he's going to do. Let him finish his job."

Still, a growing number of Democratic voters and activists appear ready to not only call for impeachment now, but also to make that call a central part of the 2018 midterm election. California Democratic megadonor and activist Tom Steyer has sunk at least $10 million into an online petition effort urging Trump's impeachment. He has already gathered more than 3.3 million signatures.

"Impeachment is really about a president breaking his trust with the Constitution, with the American people," Steyer told NPR.

Steyer is running glossy national television ads on cable to promote the effort, raising questions about whether he is using the impeachment push to raise his profile ahead of a run for office.

"The criteria has already been met" for impeachment, Steyer contended, citing Trump's firing of FBI Director James Comey – and Comey's testimony that Trump had asked the director to "go easy" on Flynn.

He added, "The other thing that's going on though is not just whether he has met the criteria to be impeached, but also the huge threat that he presents to the American people, which means why there's the urgency for us to act. And that's what we're really trying to do. We're trying to give Americans a voice where they say, 'This president is a threat to us.' "

See below for a summary from Green's office of the articles he introduced:

Summary of Articles of Impeachment

Article I – Associating the Presidency with White Nationalism, Neo-Nazism and Hatred

• Donald J. Trump did not issue a public statement when these hate groups returned to Charlottesville, Va., chanting "You will not replace us!" He did, however, issue several statements related to players in the National Football League exercising their constitutionally protected right to protest.

• Donald J. Trump shared three videos from a British right-wing extremist that purported to show various violent acts committed by Muslims. The videos were found to be inaccurately titled and characterized.

• Donald J. Trump issued a public statement that transgender individuals are banned from serving in the United States military.

• Donald J. Trump made a public statement referring to professional football players as "sons of bitches," therefore denigrating them and their mothers, for exercising their constitutionally protected right to protest.

• Donald J. Trump made a public statement that after being devastated by a Category 4 and Category 5 hurricane, Puerto Ricans "... want everything done for them when it should be a community effort," inciting racial tensions around the stereotype that people of color need or want handouts.

• Donald J. Trump made a public statement that after being devastated by a Category 4 and Category 5 hurricane in one week, Puerto Ricans had "... thrown our budget a little out of whack." Similar statements were not made by Mr. Trump about Texas or Florida, which were also devastated by hurricanes.

• Donald J. Trump issued a public statement referring to Rep. Frederica Wilson (D-FL-24), a female, African-American Member of Congress as "wacky" and called her a liar.