Accessibility links
Wildfires Exacerbate Chronic Homelessness In Northern California Residents who lost homes in the wildfires two months ago are adding to the chronic homelessness problem in the city of Santa Rosa, where more than 3,000 people were already living on the streets. 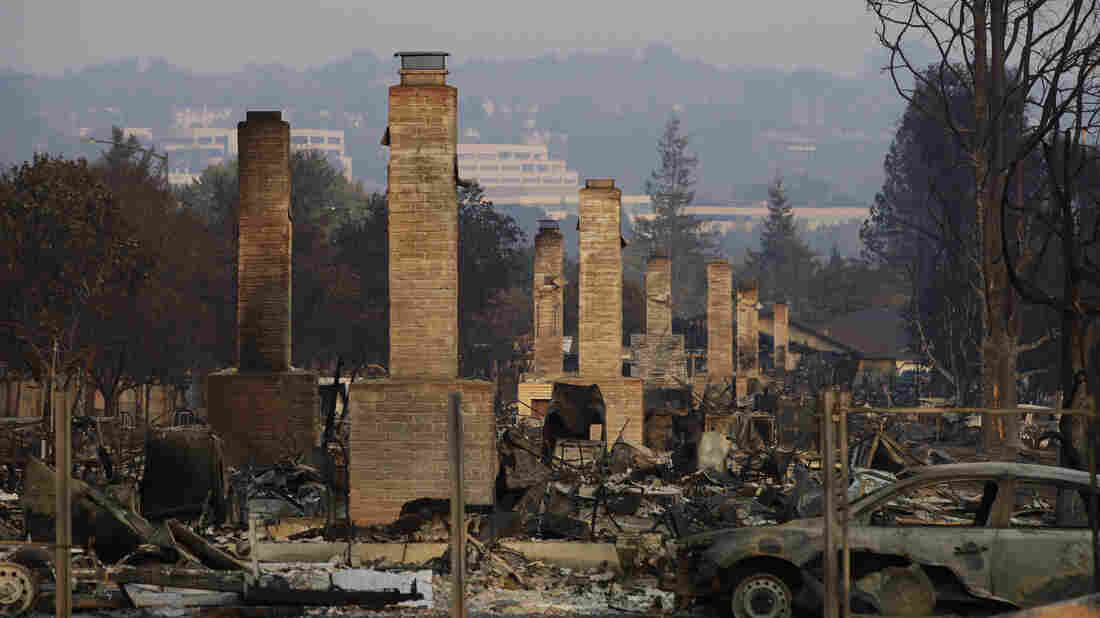 A row of chimneys stand in a neighborhood devastated by a wildfire on Oct. 13, 2017, near Santa Rosa, Calif. Massive wildfires swept through Northern California two months ago, destroying thousands of homes and businesses. Jae C. Hong/AP hide caption 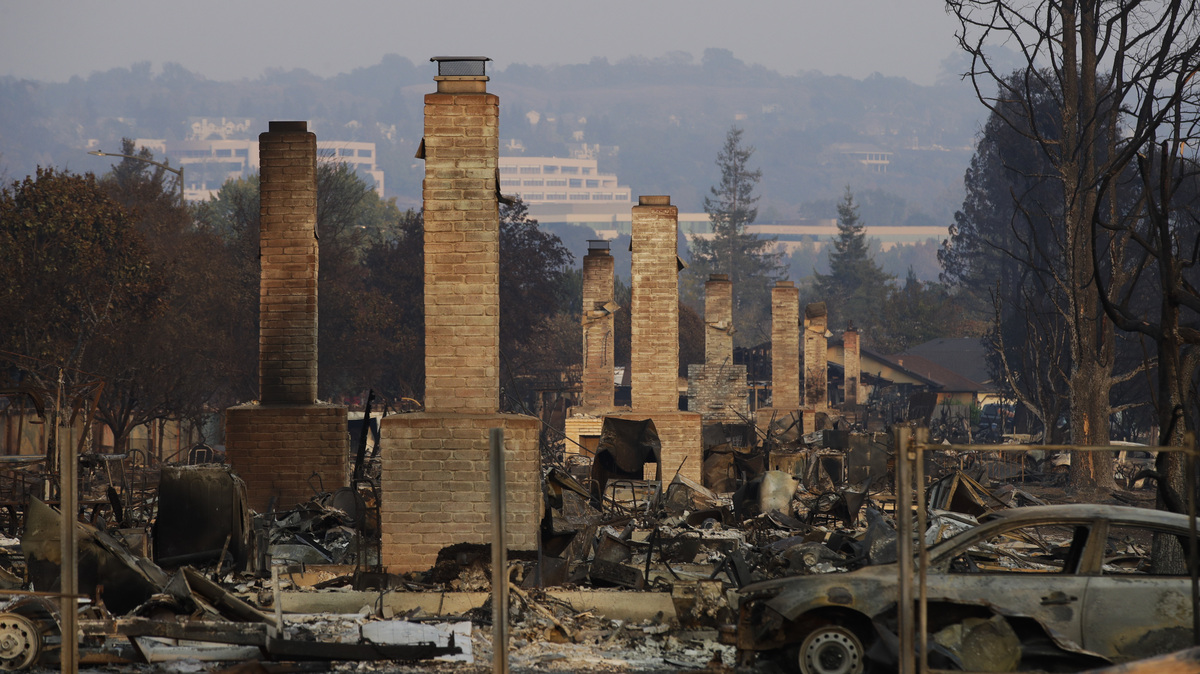 A row of chimneys stand in a neighborhood devastated by a wildfire on Oct. 13, 2017, near Santa Rosa, Calif. Massive wildfires swept through Northern California two months ago, destroying thousands of homes and businesses.

Two months ago raging wildfires in Northern California destroyed thousands of homes and businesses, intensifying an already chronic homelessness problem in the city of Santa Rosa.

The city lost 3,000 homes – 5 percent of its total housing stock – in the Tubbs fire, the largest blaze to sweep through the area in October. Price gouging is creating a second wave of homelessness as exorbitant rents keep people from finding new housing in the wake of the fires, says Jennielynn Holmes, senior director of shelter and housing for Catholic Charities of Santa Rosa. Holmes says the result could be more devastating than the housing crisis that precipitated the Great Recession.

Holmes says that for this group of people, "their unit didn't burn, but because of the fire and this new market, it is completely taking them offline," adding that landlords whose homes burned are evicting tenants from rental units.

Between September and mid-October, the typical asking price on the rental market jumped by 36 percent in Sonoma and 23 percent in Napa, according to an analysis by rental site Zillow. The median monthly rent in Santa Rosa grew to $2,982 in the days after the fire.

The dwindling supply of affordable housing in the city of more than 160,000 is affecting people across the socioeconomic spectrum, Holmes says, but the situation is particularly dire for people who were already homeless. Before the fires, Santa Rosa only had a less than 1 percent vacancy rate, and the city was struggling to move nearly 3,000 homeless people out of tent encampments on the streets.

There is also a growing concern that price gouging will create more problems for the long-term homeless population, as people with higher incomes enter the rental market and lower-income people are pushed out, Holmes says.

Regardless of intent, the rent uptick is exacerbating the income gap in Sonoma County, where the median home price is more than $600,000, more than double the national average. People who moved to Sonoma County to dodge million-dollar home prices in San Francisco may now be priced out.

"Because of that difference, in the last few years, a lot of people who could not afford to live in San Francisco or Santa Clara, they move farther north, out to counties like Sonoma," Oscar Wei, a senior economist at the California Association of Realtors, told the Los Angeles Times in October.

New data from the Department of Housing and Urban Development show that the homeless rate rose slightly this year for the first time since 2010, due to a spike in homelessness in cities along the West Coast, including Los Angeles, Seattle, San Diego and Sacramento. The data indicate a severe shortage of affordable housing is causing the homelessness upsurge in these cities.

In Santa Rosa, Holmes says the wildfires have emboldened advocates to aggressively step up efforts to combat homelessness from all angles.

"We have these high priority issues for our community prior to the fire on October 7th. Then the fires hit October 8th, and everything is magnified," she says. "And what's really important is ... we don't just address the people who were displaced directly by the fire in our rebuilding efforts."