Accessibility links
'I, Tonya,' You, Implicated Director Craig Gillespie brings bold innovation to the biopic genre, using various tones and approaches to tell the tale of Tonya Harding (Margot Robbie) while satirizing our love of spectacle. 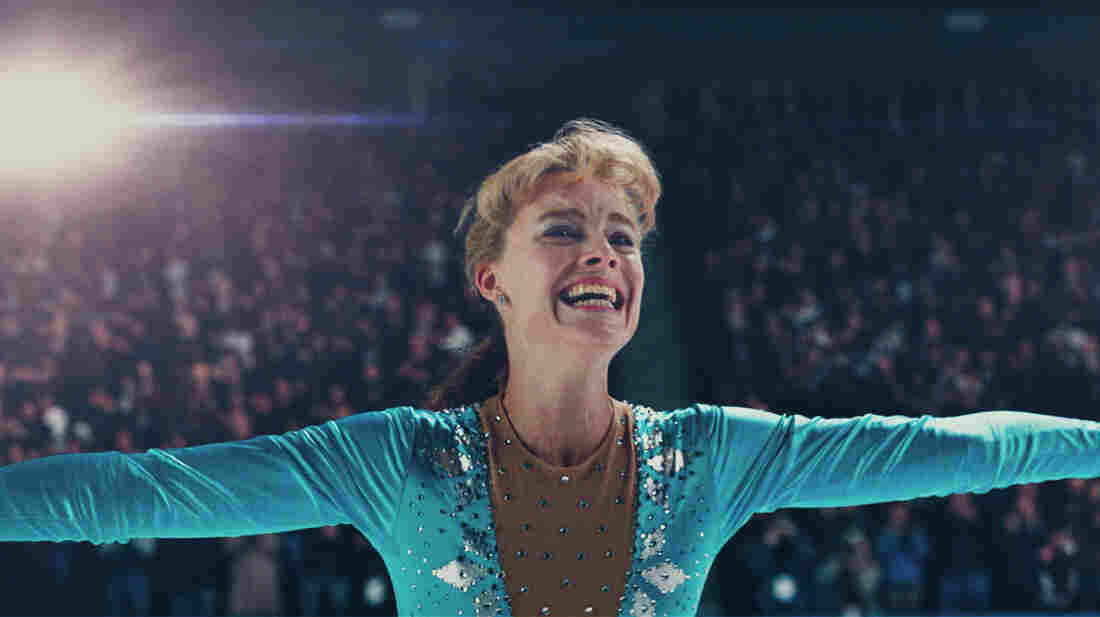 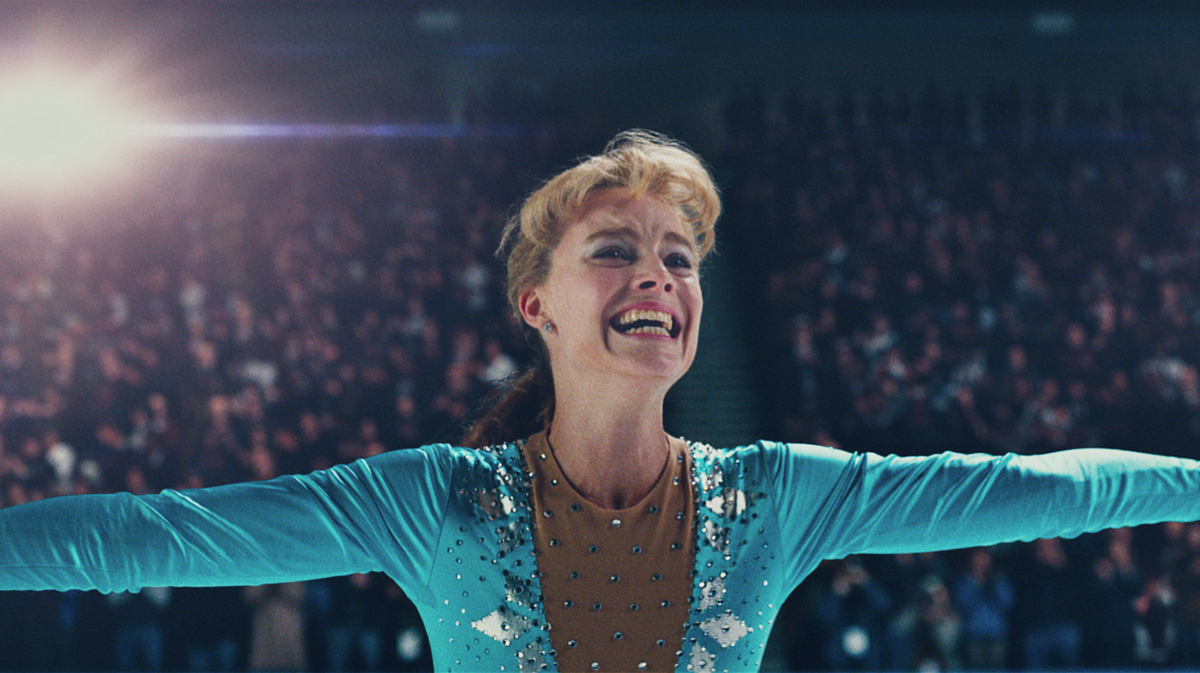 Toe Pick Your Battles: Margot Robbie is Tonya Harding in I, Tonya.

Tonya Harding was never supposed to be a pro figure skater. Like so many young American dreamers before her, she had it all wrong for success: born into the wrong class, raised by the wrong role model, drawn to the wrong men. And she had the wrong kind of femininity for the sport she loved, too, because those judges didn't want to see a ZZ Top routine from someone who sewed her own costume, even if it did include a flawlessly executed triple axel.

So when Harding did find a bit of glory, there were corrective measures in place, and her self-made undoing — by playing some part in the "hit" on U.S. rival Nancy Kerrigan's leg, the scandal that would unravel her career and the entire 1990s along with it — was the fitting, flaming end to her membership in the elite club that never wanted her anyway.

That is the argument put forth by I, Tonya, the cheeky and skate-sharp new biopic from director Craig Gillespie coming only a few short years after the ESPN documentary. The title tips us off that Harding's story — drawn from interviews with all the key players — has been rehabilitated into the stuff of tabloid Greek tragedy. This is a bold film, especially in its leveraging of all that real-life contradiction to create something that shocks and delights us with its own stylistic wrongness. I, Tonya takes greater risks with the biopic genre than any other in recent memory, and it's remarkable how much of it lands upright. It's the triple axel of based-on-a-true-story movies.

As played magnificently by Margot Robbie, Tonya is a powerhouse athlete, a fragile abuse victim, an impoverished country girl and a snarky media critic. Robbie embodies all these roles with a childlike sincerity, a lost-soul cluelessness, as her Tonya never ceases to wonder why it can't just be about the skating. She and the film whip among these personas with wild abandon, mixing styles and tones in a chaotic fashion that borders on overkill. (Must we indulge "present-day" interviews, voice-over AND talking directly to the camera?) But it all builds to a satisfying and illuminating portrait of a poor American girl who maybe never stood a chance.

The film's account of Harding's upbringing is so heartbreaking that it would be unbearable if it weren't presented in such a bouncy, off-kilter way. As a child in Oregon, she was practically shoved onto the ice by her waitress mother LaVona (a superb Allison Janney), partially because her mom sees talent but mostly because she is grooming Tonya for a future as the butt of her endless verbal and physical abuse. LaVona will hold the cost of Tonya's skating lessons over her head for the rest of her life, long after she compelled her daughter to drop out of school so she can focus on the sport.

Most of the film is devoted to Tonya's marriage to, and subsequent divorce from, Jeff Gillooly (Sebastian Stan). Although the Jeff in the "present day" sequences is muted and introspective, offering deep insights into how his decisions would go on to shape the culture, in the rest of the film, he is an abusive leech, incapable of offering anything to Tonya except psychological obsession as she climbs the ranks of U.S. Figure Skating. Their tumultuous relationship is marked by the cycle of Jeff's abuse (he hits her at home and later threatens her at gunpoint) followed by his blubbering, shameless apologies and Tonya's continued gravitation to him even after leaving him and filing a restraining order. Even these scenes, which are brutal enough to watch without the pop songs that punctuate them like thunderclaps, don't come close to reaching the real-life Harding's accounts of what Gillooly did to her. But abuse is complex, particularly if you live a sheltered, scrutinized existence, and one of the big strengths of I, Tonya is how it refuses to make its hero into a sap or her abusers into mere monsters. If they were, we wouldn't feel as affected by a moving (if a bit showoffy) long take of a post-divorce Jeff in various mopey positions around the house, inhabiting Tonya's negative space.

The film abruptly shifts gears into full-blown farce as we approach what everyone on screen refers to as "the incident": the attack that created the inescapable digital-video image of the innocent, white-dressed Kerrigan clutching her knee and wailing, "Why? Why?" Gillespie and screenwriter Steven Rogers know an inept hit job when they see one, and they milk this conspiracy of dunces for all it's worth. It's all orchestrated by Jeff's buddy and self-proclaimed Tonya bodyguard Shawn Eckhardt (Paul Hauser, champion goober), who mimes criminal-mastermind behavior from inside his mom's basement; his "guys" get hyped for their job by blasting "Gloria"; and when it's all over and Shawn has blown his own cover, he insists to a TV reporter that he has training in "counterespionage and counterterrorism," despite all evidence to the contrary.

I, Tonya gets mushy on the question of exactly how much knowledge Tonya had of the incident, which is consistent with the intrigue that has surrounded this sordid saga ever since. But it takes the extra step of insisting the real culprits are us, the basic-cable mouth-droolers who hoovered up her every mistake because we love to watch train wrecks on ice. In fact, Tonya shames us right to our faces, an accusation we might take more seriously if the movie didn't seem to be trying so hard to reconnect with whatever electric qualities first hooked America on her story. Still, for as jolting an experience as watching the film can be, it does help Tonya live her truth, while revealing, from within all its wrongs, the basic truth of figure skating: It has never just been about the skating.