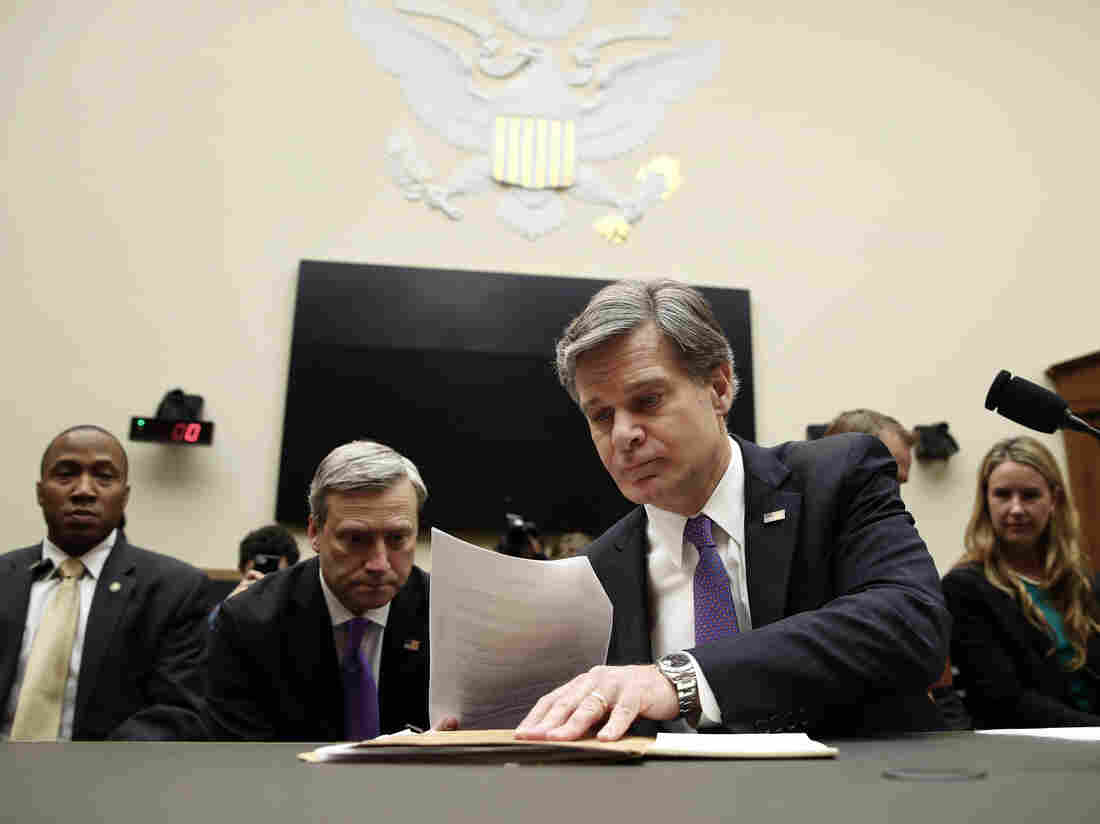 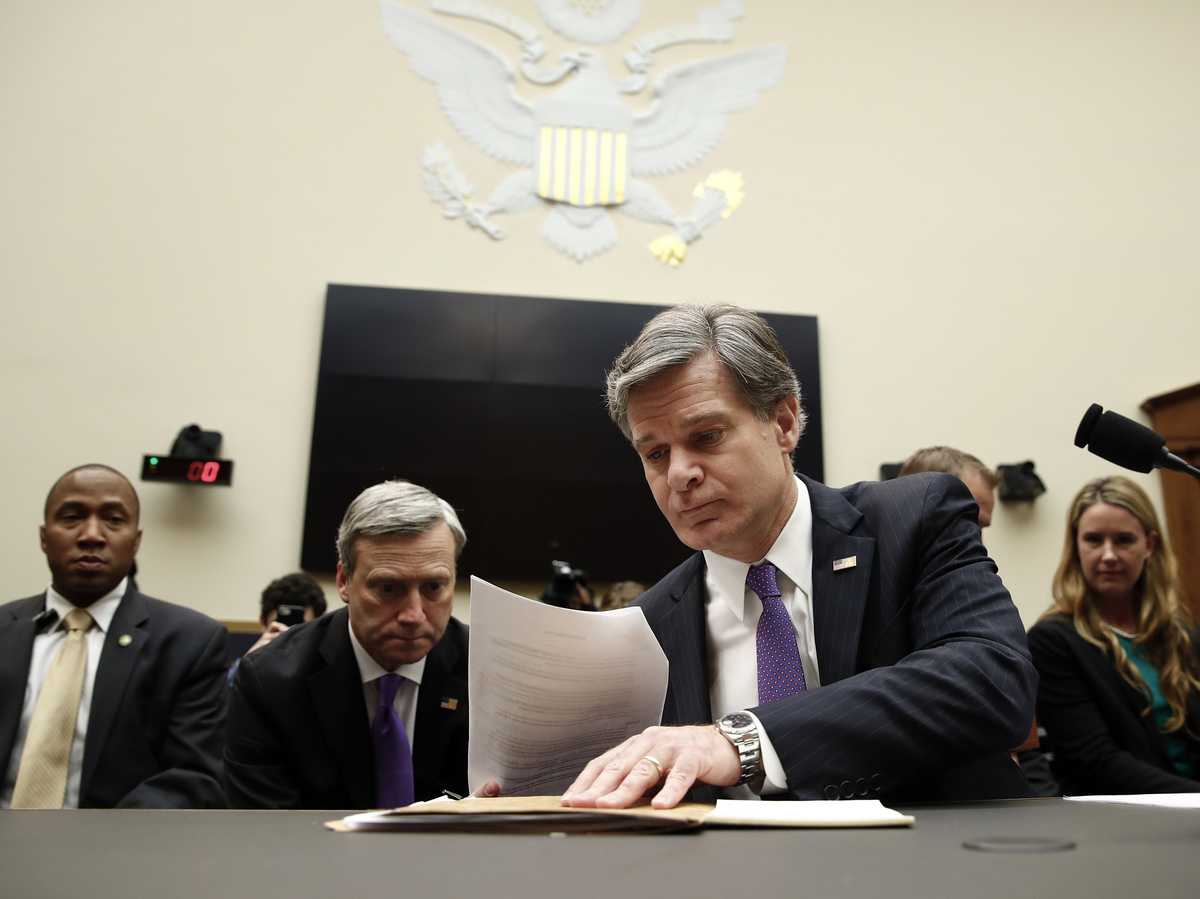 FBI Director Christopher Wray defended his agency on Capitol Hill Thursday, speaking publicly for the first time since President Trump denigrated the agency last weekend. The questioning from lawmakers and the responses the new FBI director gave are a harbinger of likely issues to be raised again as the Justice Department's Russia probe appears to be intensifying after the recent plea deal of former national security adviser Michael Flynn.

"There is no shortage of opinions out there," Wray told the House Judiciary Committee. "What I can tell you is the FBI I see is tens of thousands of agents and analysts and staff working their tails off to keep Americans safe from the next terrorist attack; gang violence; child predators; spies from Russia, China, North Korea and Iran."

"The FBI I see," Wray added, "is tens of thousands of brave men and women who are working as hard as they can to keep people that they will never know safe from harm."

That description is a far cry from how the president described the agency on Sunday, when he said "its reputation is in Tatters — worst in History!" in a tweet.

The hearing, like many others this year, was starkly divided along party lines.

Republican lawmakers continued a trend in working to discredit or doubt the FBI and Department of Justice special counsel Robert Mueller's investigation of Russian interference in the 2016 presidential election and possible ties between Russia and the Trump campaign. They intensely focused on revelations that came to light last week about Peter Strzok, a high-ranking FBI agent who worked on both the Hillary Clinton email probe under former FBI Director James Comey and Mueller's investigation of Russian interference in last year's presidential election and possible ties between the Trump campaign and Russia. Strzok's anti-Trump text messages led to his removal from the special counsel's investigative team over the summer.

The inspector general for the Justice Department is currently looking at Strzok's behavior, and whether any FBI investigators improperly allowed their political leanings to affect the Clinton investigation. Many times, Wray said he was unable to give further details on Strzok's actions or the actions of others, because of the ongoing IG investigation.

Rep. Louis Gohmert, R-Texas, read off a list of FBI employees and had Wray confirm that he hadn't seen any political bias from the five officials.

Rep. Jim Jordan, R-Ohio, said that if every member of Mueller's team who was "anti-Trump" were kicked off the investigation, "I don't know if there'd be anyone left." Therefore, Jordan suggested that there had to be more going on with Strzok that was not yet known publicly — or even, in a more confidential or secure setting, known yet to members of Congress.

"The depths of this anti-Trump bias on the Mueller team just goes on and on," said Rep. Chabot. "It's absolutely shocking."

Mueller is a registered Republican, as NPR Justice Correspondent Carrie Johnson has reported, who has been tapped by both Democratic and Republican presidents over the years.

"Mueller is kind of the rare person in Washington, D.C., who just does his job — head down, does the work, makes the calls based on his judgment of what's right and wrong," Neal Katyal, the former acting solicitor general under President Obama and now a partner at Hogan Lovells, told NPR.

In Thursday's hearing, Democrats sought to push the focus back on Trump's comments and actions, and the actions of members of his campaign last year. They repeatedly gave Wray an opportunity to dispute the president's portrayal of the FBI as an agency "in tatters."

"My experience has been that our reputation is quite good," Wray said, responding to questioning from Rep. Sheila Jackson Lee, D-Texas.

Trump, Russia And Beyond: 3 Tough Questions As FBI Director Heads To Congress

Details from the charging documents related to Flynn's plea deal and Trump's recent tweets have given fresh life to questions about obstruction of justice related to the president's decision to fire Comey.

Wray repeatedly deflected questions about whether Trump's decision to fire Comey would put him in legal jeopardy. The FBI director did, however, reassure lawmakers that Trump has not tried to interfere with his work or asked him to pledge any sort of loyalty oath directly to Trump, as Comey famously said the president did to him.

Instead, Wray re-affirmed comments from his confirmation hearings where he said his loyalty was to the Constitution and the laws of the United States. "There isn't a person on this planet that can get me to drop a properly predicated investigation or start an investigation that's not properly predicated," Wray told Rep. Eric Swalwell, D.-Calif. Asked by Swalwell whether he believed President Trump was above the law, Wray responded: "I don't believe anybody is above the law."

Multiple Democratic lawmakers also questioned Wray about a recent FBI report about so-called black identity extremists. The report has been cause for concern from several African-American members of the committee, who say the groups don't actually exist, and that the FBI should be focused instead on white nationalist extremist groups like the Ku Klux Klan.

Rep. Karen Bass, D-Calif., told Wray that she can't recommend that black activists who are among her constituents even speak to the FBI, because it's unclear "where the FBI is coming from," in her words.

"[The report] sends a chill to activists around the country," Bass said. "And my big concern is that local law enforcement will misinterpret that and will clamp down on people exercising their First Amendment rights."

To protect upcoming U.S. elections, Wray said that the FBI has set up a foreign influence task force that draws on the expertise of several divisions of the agency — and, Wray added, the FBI is working in coordination with the Department of Homeland Security which has set up a similar multi-disciplinary group within that agency.

The most prominent non-Russia related topic at the hearing was federal surveillance.

The FISA Amendments Act, known as Section 702, which allows federal agencies to eavesdrop on communications and review email without following an open and public warrant process, is set to expire at the end of the year.

The FBI and other agencies in the intelligence community have said the law is critical to fighting terrorism, and Wray said he supports legislation to extend it that would protect "not only the Constitution but protect our national security."