Accessibility links
DACA Fix Looms Over Talks To Prevent Government Shutdown Leaders from both parties in Congress are headed to the White House on Thursday to discuss a deal to keep the government funded, and Democrats are seeking legal protection for so-called DREAMers. 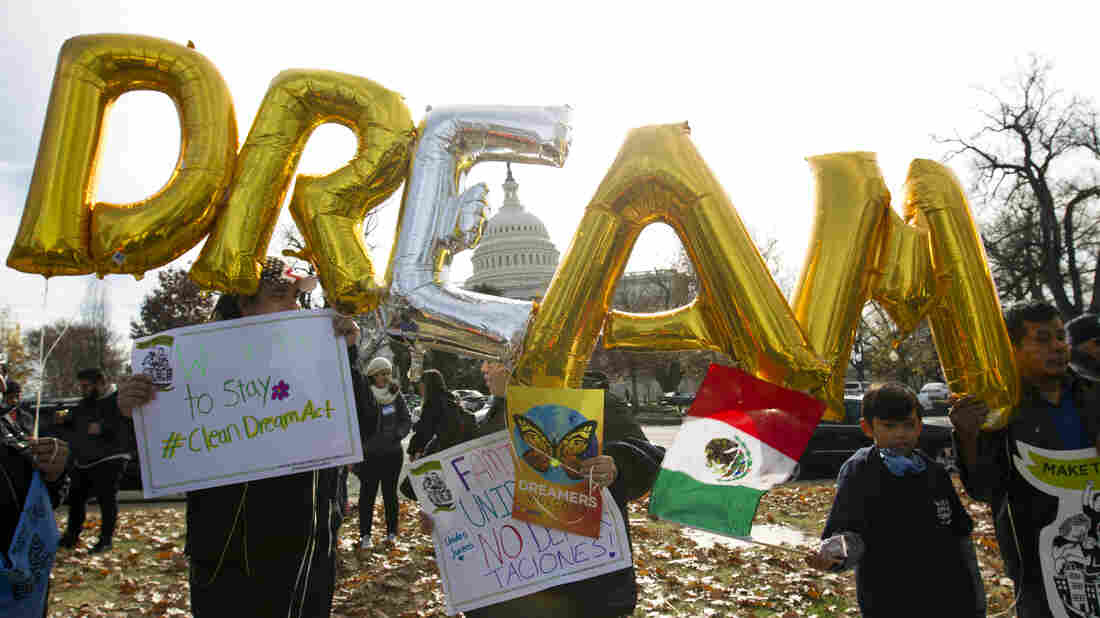 Demonstrators hold up balloons during an immigration rally in support of the Deferred Action for Childhood Arrivals and Temporary Protected Status programs, near the U.S. Capitol on Wednesday. Jose Luis Magana/AP hide caption 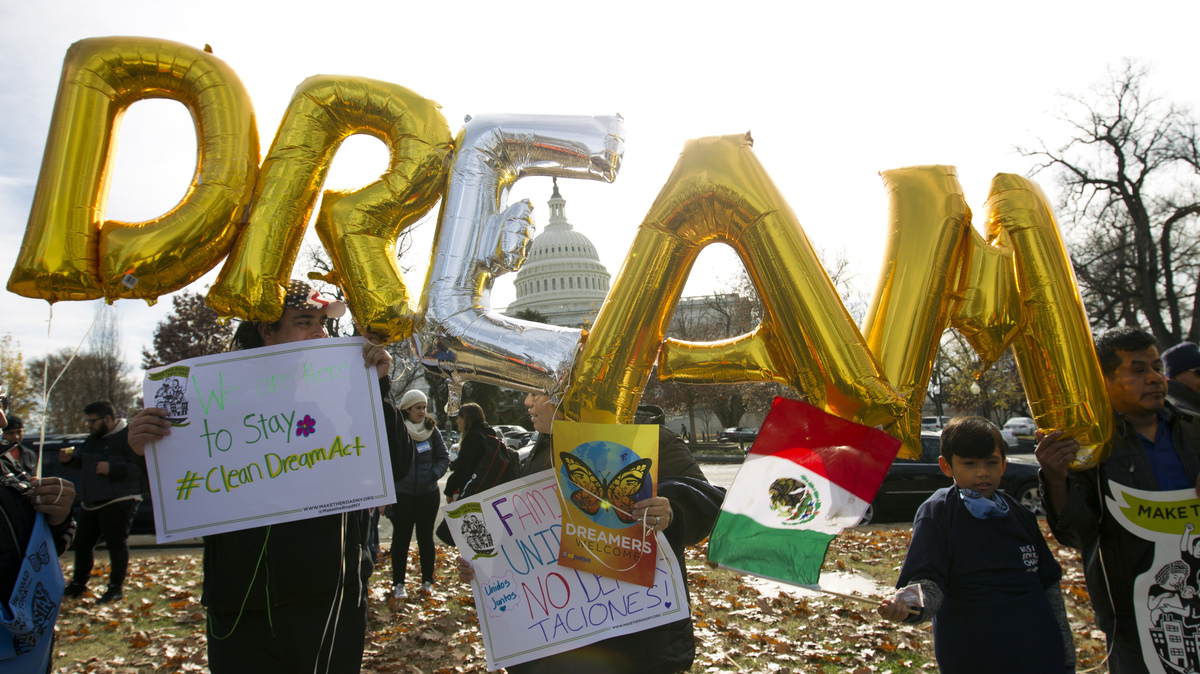 Demonstrators hold up balloons during an immigration rally in support of the Deferred Action for Childhood Arrivals and Temporary Protected Status programs, near the U.S. Capitol on Wednesday.

Congress, once again, finds itself days away from a potential government shutdown, and a fight over immigration could stand in the way of a deal to prevent it.

Democrats say that's wrong on multiple counts — that they don't want immigrants streaming into the country illegally, nor do they want a shutdown. That speculation by Trump further heightened tensions ahead of a planned Thursday with the president and congressional leaders at the White House.

At issue are protections for immigrants known as DREAMers — the roughly 700,000 people who are in the U.S. illegally and were brought to the country as children.

While it's true that Democrats want to include a pathway to citizenship for DREAMers in some kind of year-end legislation, they say they also want to avoid a funding catastrophe. Congress needs to pass a spending bill and have it signed into law by Trump before midnight Friday if they hope to avoid running out of money to fund the government. The House is set to vote Thursday on a two-week extension, pushing the threat of a shutdown off to just before Christmas.

"We don't think we're going to get to that," Schumer said. "There are good negotiations occurring between Democrats and Republicans to come up with a good DACA program as well as some good border security."

Democrats want to pass permanent protections for people who were once protected under DACA, the Deferred Action for Childhood Arrivals program started by former President Barack Obama. Trump rescinded the program in September and said it was up to Congress to pass a law if they want the DREAMers protected from deportation.

Trump approached a deal with Democrats to create a permanent legal fix for DACA shortly after rescinding the program, infuriating many of his conservative supporters.

Republican leaders have promised to pass some kind of immigration bill early next year. They say they are open to working with Democrats on the legislation, but GOP leaders don't think there's a huge rush to get it done.

Texas Sen. John Cornyn, the No. 2 Republican in the Senate, told reporters that the immigration talks can wait until next year.

"We are certainly willing to enter into those good-faith negotiations, but they do not belong in an end-of-the-year spending appropriations debate," Cornyn said. "I hope our colleagues on the other side of the aisle will take our word for it, as demonstrated by our good faith in making an offer to them, that we do want to resolve this, but it's not going to be before the end of this year."

But activists and many Democrats are specific they want a path to citizenship, and they say they're tired of waiting.

California Sen. Kamala Harris, one of several Democrats who spoke Wednesday at an immigration rally outside the Capitol, said there is an urgent need to find a solution now.

"I'm not sure what to think about where this administration stands, but I know that we as a country, and leaders of this country, in particular in the United States Congress, need to sand with these DREAMers and give them the protections they deserve. And we need to do this by the end of the year," Harris said. "It's a false choice, also, to suggest that these two issues need to be connected."

Democrats don't have much leverage in Congress, except when it comes to spending bills. Those require 60 votes to pass the Senate, so the 52 Republicans don't have enough votes to keep the government open on their own. Democrats could demand an immigration deal in exchange for their votes.

Republicans have warned that combining the two could risk preventing a bipartisan deal on immigration at a time when there is renewed hope that such a solution is possible. Senate Republicans, including Judiciary Committee Chairman Charles Grassley of Iowa and Sen. Jeff Flake of Arizona, say they want to reach a deal.

In the House, 34 Republicans wrote to Speaker Paul Ryan, R-Wis., this week calling on him to do the same.

That's why activists like Jeremy Robbins of the group New American Economy say this is a perfect time for Congress act.

"This is not a hard policy issue," Robbins said. "There is huge and broad support to find a solution, so absolutely we think there should be a solution now."

His group is working with people on the left and right. They say they don't want a government shutdown either, but they do want an immigration bill this month. Their coalition includes major employers and manufacturers, faith groups and an organization run by powerful Republican fundraisers, brothers Charles and David Koch.

New American Economy set up what members call a war room inside the Capitol on Wednesday as part of a day of protests and lobbying by immigration activists. The operation included a pair of rooms where lawmakers could tape messages to be aired back home.

"We need to find solutions to our nation's current immigration problems starting with a solution for DREAMers," Ros-Lehtinen said in her message. "Our country was funded and grew prosperously based on providing opportunities and fairness for all."

The whole idea is to build outside pressure to get a deal before Congress leaves for the holidays. Whether that can happen without shutting down the government might become clear when Trump meets with congressional leaders at the White House on Thursday afternoon.