Accessibility links
California Fires: Why Wildfires Are Becoming A New Reality In The State The wildfires consuming parts of Southern California are becoming a new normal for the state, climatologists say. They're driven by a warming ocean, high winds and drought. 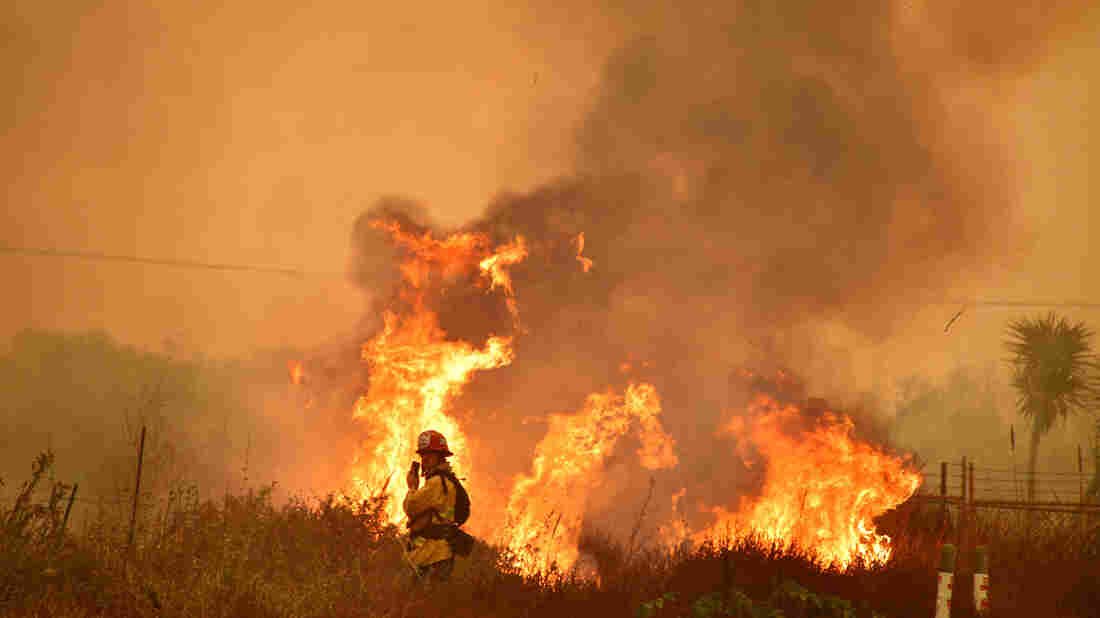 Fire and smoke rise off the northbound side of the U.S. 101 freeway in La Conchita, Ventura County. Frederic J. Brown/AFP/Getty Images hide caption 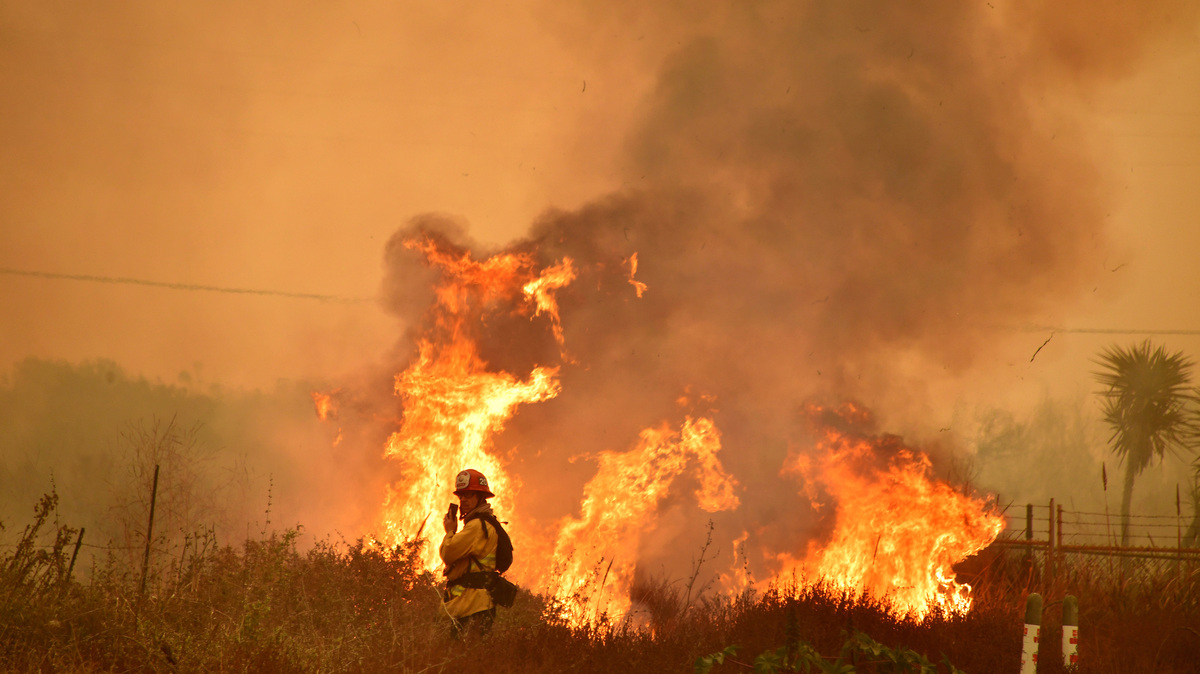 Fire and smoke rise off the northbound side of the U.S. 101 freeway in La Conchita, Ventura County.

The destructive wildfires in Southern California are capping one of the worst fire seasons on record in the state. They come less than two months after thousands of homes burned and more than 40 people were killed by fires in Northern California. Climatologists warn that this is the new reality for the region, where wildfires are occurring year-round.

Los Angeles residents Neil Fazzari and his wife, Kirsten, are stunned to see such a large wildfire this late in the year. "It was a shock this morning when our neighbors knocked on our door," Kirsten said.

"I thought it was over; I thought that that season was over," Neil adds.

The couple wiped a thick layer of ash off the windshield of their SUV and pointed up at their street where they evacuated.

Their neighborhood in LA's Sepulveda Pass, a brush-covered canyon on the city's western edge, is adjacent to the nation's busiest freeway and just below the famous Getty Museum. It's now full of firetrucks and dense with smoke.

The immediate culprit of the five major fires burning in Southern California right now is the Santa Ana winds: the hurricane-force gusts that flow off the Mojave Desert and ignite infernos from things like toppled power lines or carelessly tossed cigarette butts.

It's not unusual to get Santa Anas this late. It's just that by now Southern California's rainy season should have started.

"This year, we experienced our record warmest summer," he says, "and in some places record temperatures in the autumn as well."

There is also a high-pressure ridge stuck out over the Pacific Ocean that's deflecting storms.

Swain's research is showing that these high pressure systems are growing in frequency as a result of the warming Pacific — one reason California is getting hotter and drier, with drier brush and fuels and longer fire seasons.

"It's starting to appear that the likelihood of seeing these sorts of events is increasing," he says.

The open question now is how long this high pressure area sits — if it's more than just a few weeks, much of Southern California could fall back into extreme drought. Forecasters say there is also a good chance this ridge could settle in and cause a prolonged dry spell lasting several weeks from Vancouver, British Columbia, to Baja, Calif.

In Southern California, drought and wildfires are a fixture of daily life — especially in Los Angeles, with its chaparral-covered canyons and vast open spaces between hilly neighborhoods.

Fire agencies here are considered some of the best in the world at knocking down urban brush and wild land fires before they consume neighborhoods.

But in extraordinary conditions like these, with the fires burning so erratically, it's not even safe for firefighters to try to protect homes at times, let alone try to contain the flames. That's why you hear Los Angeles Fire Chief Ralph Terrazas constantly pleading with the public to pack go-bags, and heed all evacuation warnings.

"The people in this area and all areas of the city that have a brush fire threat, need to continually monitor the media," he warns.

This new norm is unsettling for people like the Fazzaris, who moved here from New York a few years ago.

They, too, were prepared and ready to leave. But Neil says he's second-guessing living in a city where you have to have an emergency kit packed at all times — whether it's for fires, floods or earthquakes.

"I don't really care for that," he says. "I don't like that so much. I'm kind of over the wildfire thing, to be quite honest."